Accessibility links
For Workers At California Mental Hospitals, Fear Is Part Of The Job When a psychiatric technician at Napa State Hospital was murdered last fall, allegedly by a patient, staffers began going public with their safety complaints. More than 80 percent of the patients at the hospital arrived by way of the criminal justice system — deemed either not guilty by reason of insanity or just too dangerous to be paroled. 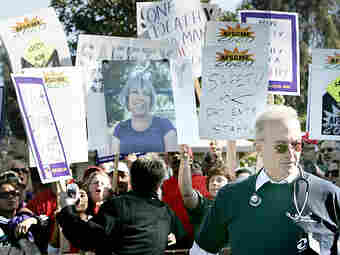 The tipping point for major change is often tragedy. That may be the case in California at the state psychiatric hospital in Napa, where an employee was killed last October, allegedly by a patient — one of thousands of violent acts committed at the hospital that year.

Donna Gross, a psychiatric technician who had been working at Napa State Hospital for 14 years, was walking on hospital grounds late in the afternoon when she ran into a patient named Jess Massey.

Like many patients at Napa, Massey had a pass that allowed him to wander on the grounds unsupervised. He allegedly cornered Gross between a couple of buildings, attacked her, stuffed dirt into her mouth — which kept her from screaming — and strangled her.

Massey, who has pleaded not guilty, had a criminal history that included aggravated sexual assault, armed robbery and attempted murder. These days, that's not so unusual at Napa.

More than 80 percent of the patients arrive by way of the criminal justice system, considered incompetent to stand trial, not guilty by reason of insanity, or just too dangerous and mentally ill to be paroled to the community.

But 20 years ago, hardly any of Napa's patients were criminal commitments. And staffers complain that this hospital wasn't designed to deal with the patients it's now serving. 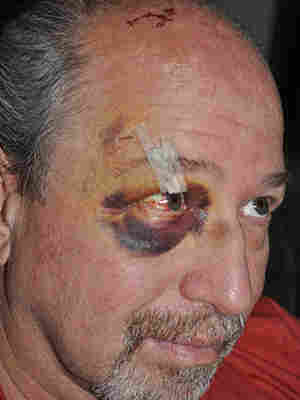 Dr. Richard Frishman, a psychiatrist at Napa State Hospital, photographed after he was attacked by a patient. Kathryn Potter hide caption

A Sharp Rise In Assaults

At a recent demonstration held by Napa employees demanding better safety measures, finding people who had been attacked by patients wasn't difficult.

Dr. Richard Frishman, a psychiatrist, was attacked while interviewing a new patient. "He came flying across the table, fists flying," Frishman says. "He was able to hurl me against the wall where I struck my head and fractured my wrist."

There are statistics to support these stories. According to a report mandated by the federal government, patients at Napa committed 75 physically aggressive acts against staff in a single six-month period ending in early 2009. In the same period one year later, there were nearly four times as many assaults. The report also shows that patient-on-patient aggression more than doubled during that same time.

Asked what it's like to be afraid of the people he's tasked with helping, Frishman says: "You have to be able to separate your own traumas from the moment, and if you can walk away at the end of the day and feel that you've helped those truly in need of help, that seems to outweigh the risks that we currently take."

'I Have No Desire To Be Violent'

One Napa patient, whose name is not being used because he says he fears retaliation, says a relatively small percentage of predatory patients make violence and intimidation part of daily life.

"There is nothing therapeutic about what's going on here, nothing at all," he says. NPR wasn't allowed to enter the secured area or speak to any patients at the hospital, so the patient was reached by phone.

At least, he's not when he's on his meds. This patient was sent to the hospital after being arrested for assault and found incompetent to stand trial. But as he describes it, violence is almost inescapable at Napa — like the night he heard an alarm go off in the hall outside his room.

"So I got up and got out of my bed," the patient says, "and this guy was around here throwing garbage cans, you know. He looked at me and told me I needed to take my old ass back to bed and blah blah blah, and he attacked me, and I put 11 stitches in his hand, but I broke my hand doing it."

That's the view from inside the security fence. In her office outside of the fence, the hospital's executive director, Dolly Matteucci, says that she wants nothing more than for her staff to be safe on the job. But "there's an inherent kind of risk in treating and working with individuals that are severely mentally ill," she says, "and I think all of our staff recognize that when they come to work here." 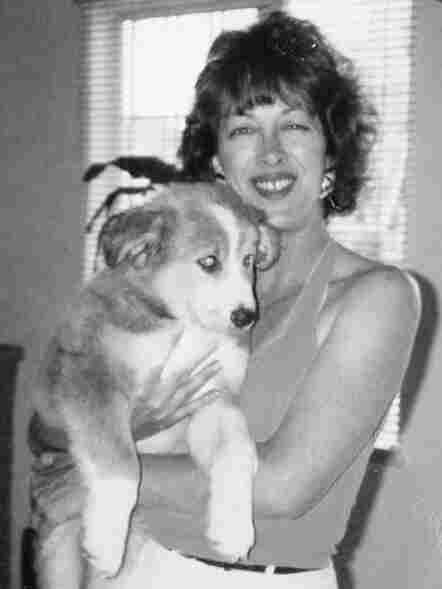 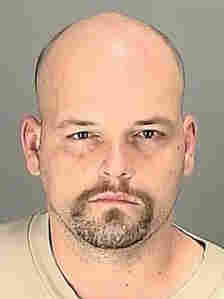 Matteucci first came to work at Napa 20 years ago as a dietician and rose through the ranks. She got her current job after Napa's previous chief executive was arrested on child molestation charges. He has since been convicted.

Matteucci says she welcomes the staff's renewed focus on safety. "I think that that is wonderful, in terms of us all talking more pointedly about what the concerns are, what the recommendations are and taking action," she says.

Among the actions taken since Gross' murder is the elimination of grounds passes like the one that Gross' alleged killer had. The campus-like layout of the hospital, with foliage and walled courtyards between buildings, provides too many places to hide.

A Plea For Help

But staffers want more, and they're hoping state lawmakers can help.

State Assemblyman Mike Allen, a Democrat, represents the Napa area. The hospital's employees are his constituents and a couple of hundred were at a hearing he convened at a local community college. Allen said he was there to listen — and he did, to a two-hour saga of injury, anger and grief.

Brad Leggs, a psychiatric technician at Napa and a union representative, created an image to go with the words. "If I may, I would respectfully like to ask those in the audience to briefly stand up if you've been injured or assaulted, or your co-worker has been assaulted."

That sight motivated the acting head of the state Department of Mental Health to call a summit meeting to deal with safety issues at all of California's psychiatric hospitals. The meeting, held last week at Napa State Hospital, was picketed by staff who say they don't need more meetings — they need action.