Accessibility links
Ahead Of 50th Anniversary, Freedom Riders Remember The Freedom Riders challenged segregation on buses and in waiting rooms throughout the South. Some of those riders are using their experiences to motivate students today — to show them that the actions of one person can make a difference.

From left to right, Freedom Riders Joan Mulholland, Charles Person, Catherine Burks-Brooks and Reginald Green pose in front of a student-created exhibit on display at the University of Mary Washington in Fredericksburg, Va.

Fifty years ago this May, 13 people boarded a bus in Washington, D.C. The Freedom Riders, as they are called, challenged segregation on buses and in waiting rooms throughout the South. Some of those riders are using their experiences to motivate students today — to show them that the actions of one person can make a difference.

Joan Trumpauer Mulholland stood alongside her fellow Freedom Riders staring at a picture of a black man on a bus who is watching two National Guardsmen.

"There's Dave Dennis," she says, "looking up at the guys with the bayonets."

The picture was among the many framed in the windows of a 1960s-era bus sitting in the middle of University of Mary Washington's Fredericksburg, Va., campus. The Freedom Riders and some students examined photos showing the struggles of the more than 400 Freedom Riders who risked their lives in nonviolent protests beginning in May 1961.

Drew Radtke, a senior historic preservation major, says one of the central questions for students has been would you get on the bus?

"In hindsight, everybody would say, 'Yeah, of course, I would.' But it comes down to — why would I get on the bus?"

It's a good question considering what the original Freedom Riders endured. In Alabama, one of the buses carrying them was firebombed and they were beaten as they fled the flames. More mob attacks followed, including a siege by several thousand angry whites at Montgomery's First Baptist Church. The Rev. Reginald Green and many others were inspired by the courage of the first group of Freedom Riders.

"Many of us caught the spark after we learned about Anniston and Birmingham and Montgomery — said, 'Hey, we want to participate in this thing, too.' So we heard the call and many of us decided we were going."

At an evening panel discussion with several Freedom Riders, they were asked whether they had expected some sort of moral transformation in the hearts of their white attackers.

"We knew that the situations presented a chance for violence," he said. "But being so young I did not think that an adult would beat up on a kid. I couldn't understand the violence — the intensity that these people exhibited."

Catherine Burks-Brooks, then 21, was caught in the riot at the Greyhound bus station and the attack on the Baptist church in Montgomery, Ala. 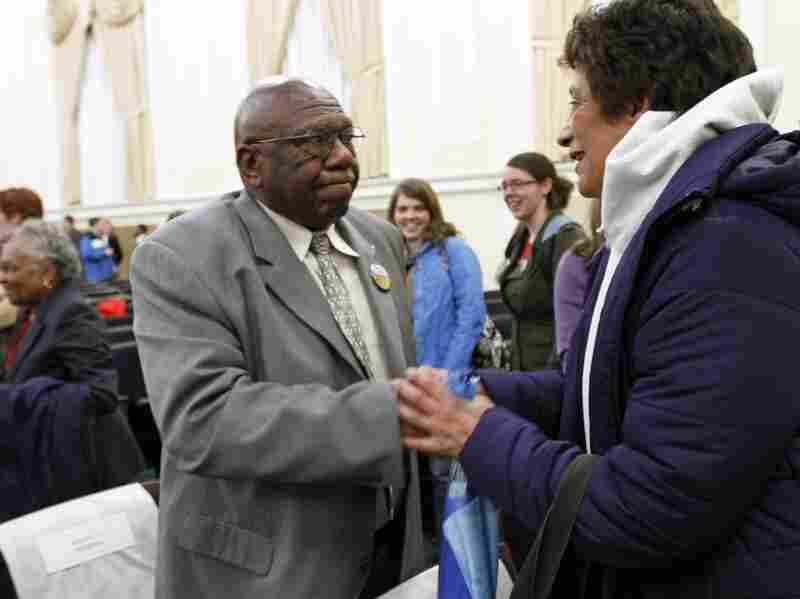 Charles Person, left, was among the youngest members of the original 1961 Freedom Riders. University of Mary Washington hide caption 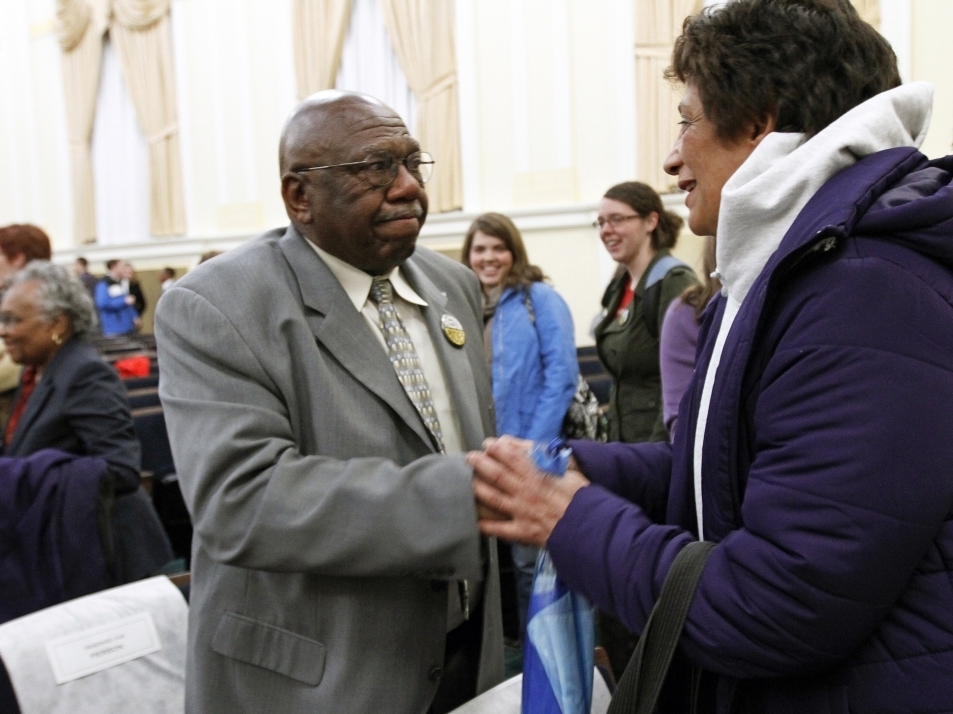 Charles Person, left, was among the youngest members of the original 1961 Freedom Riders.

"Fear, I think, was the main thing with a number of students and a number of adults," she said. "Once you're not afraid of dying -– and then what else? You can go into Mississippi, Ala."

At the bus, students signed three large panels that asked them to consider whether they'd have joined the rides. It's an interactive part of this exhibit commemorating James Farmer, who as head of the Congress of Racial Equality organized the Freedom Rides, and later taught history and American studies here.

Erica Smith-Thomas, a Spanish major, said she isn't sure she'd have had the courage to ride.

"The people who participated really had their lives changed," she said.

But she thinks events like this are important — and not just because they allow students here a glimpse of history outside of their textbooks.

"Many Americans, black and white, think we're done with this now. It happened. It's over," she said. "They really don't connect with the fact that civil rights is still a huge issue in this country."

Mulholland was a 19-year-old white student when she was arrested in 1961 and says she hopes the exhibits here inspire young people now to deal with the problems of today. That, she says, would be a tribute to the Freedom Riders who have passed on.