Accessibility links
Bret Baier: The Next Generation Of Fox News Anchor The 40-year-old newsman is at the forefront of a younger generation of stars at Fox News. But Baier still inherits some of the network's lingering questions about fairness. 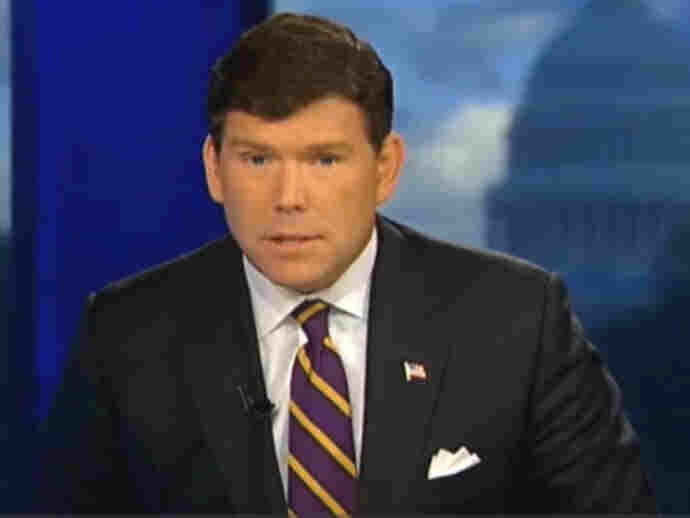 Before taking on his own show in 2009, Bret Baier was chief White House correspondent for Fox News. via Fox News hide caption 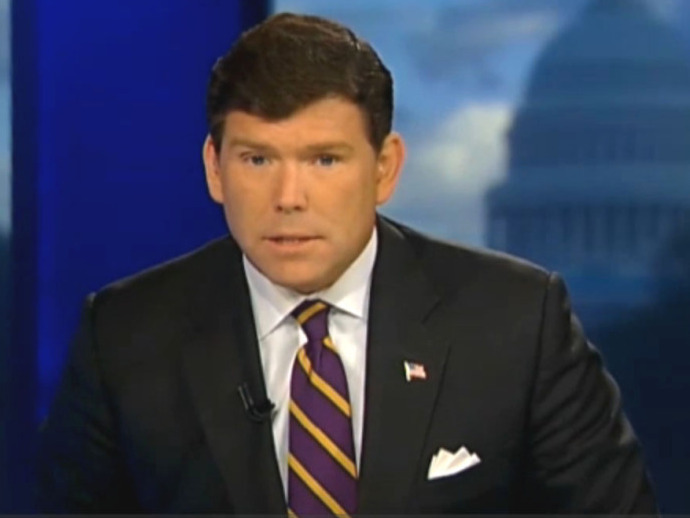 Before taking on his own show in 2009, Bret Baier was chief White House correspondent for Fox News.

If the only thing you know about Bret Baier is that he's a Fox News anchor, the moment that sticks in your mind would be his interview a year ago with President Obama.

It took place in the Blue Room of the White House, the day before the deciding vote on the landmark health care bill. Baier read aloud from readers' emails and pressed the president so many times that Obama finally erupted: "Bret – you gotta let me finish my answers."

Baier replied, "But sir, I know you don't like to filibuster --"

Obama: "Well I'm trying to answer your questions, and you keep on interrupting."

The 40-year-old Baier – an anchor pressing presidents and crisscrossing the globe to interview foreign leaders and military chiefs — finds himself at the forefront of a new generation of stars at Fox News. His show is often the second-highest-rated in cable news, behind Fox's O'Reilly Factor, with roughly 2 million viewers a night. But he still finds himself confronting some familiar and lingering questions about the network.

Like fellow Fox anchor Shepard Smith, Baier is presented by executives as evidence of the network's fairness in its news coverage. Fox's generally conservative opinion hosts have had plenty of tough words for the president, as well as his Democratic and liberal allies. (Glenn Beck, the most conspiracy-minded and conservative of them all, will no longer be among those hosts: His evening show will come to an end in a few months after he alienated major advertisers and his employers at Fox.)

Nonetheless, Baier's intense back-and-forth with Obama has been added to a list of complaints by critics who say Fox's hard news reporting is often unfair to Democrats.

Baier told me he was promised a 30-minute interview that got whittled to 20 minutes and then 15 just as he sat down.

"We started and there was a White House aide over my camera in the distance holding an iPhone [that was] clicking back from 15 minutes," Baier recalled. "So I asked the first question, and the president kind of gave this stump answer that I had heard earlier in the week about health care, that was taking a long time."

His persistence wasn't combativeness, Baier says, but demonstration of an anchor's need to pose his questions in the time allotted.

In person, Baier's a genial guy with a million-megawatt smile that's quick to crease his face — but it fades as he talks about how he got his big break.

He was a regional reporter for Fox News in Atlanta. On one bright morning in September 2001, he and a producer were ordered to drive north to New York City. They hadn't gotten past the Atlanta suburbs when they were diverted to Washington, D.C., after terrorists crashed a third plane.

"That night, as the Pentagon was burning, I was doing reports for Fox affiliates around the country," recalls Baier, who soon became Fox's first on-air Pentagon correspondent. "I traveled with Defense Secretary [Donald] Rumsfeld, and a buddy of mine in Washington actually found me an apartment. And I was overseas when everything was packed up and moved. I never went back."

Baier became White House correspondent and has been in the mix ever since. Two years ago, he inherited his mentor Brit Hume's Fox political newscast.

Jamie McIntyre, who was CNN's Pentagon reporter from 1992 to 2008, says he has always trusted Baier's journalistic instincts.

"I remember thinking that if you took the average Bret Baier report at the end of the day and you took mine — and you stripped the names out so you didn't know who was producing them — I'm not sure you could tell which report was generated by CNN and which was generated by the Fox News Channel," McIntyre says.

But according to McIntyre, the focus of story assignments was different at Fox, which he says is closely attuned to the conservative sensibilities of its core audience. Baier has done well at Fox News by paying attention, McIntyre says.

A more blunt critique was given new life last week when a tape surfaced capturing seemingly candid remarks from Bill Sammon — Fox's Washington managing editor and one of Baier's supervisors. During a speaking gig on a tour in the Mediterranean, Sammon said he engaged in "mischievous speculation" on Fox News shows during the 2008 campaign about whether candidate Obama was a socialist — even though he had no belief at the time that Obama was one. (Sammon says he had been trying to characterize what conservatives were saying at the time.)

"I think Bret is inordinately fair. He goes out of his way to make sure we hear all sides of the issue," Clemente says, adding that, at heart, "he's a reporter."

And indeed, Baier's Special Report relies heavily on reported segments — but half the show is a nightly discussion he moderates among pundits dubbed the Fox News All-Stars.

Stephen Hayes of the conservative Weekly Standard is a regular.

"To me the single best thing about the panel is the conversation — and it's a real conversation," says Hayes, who was a junior fraternity brother of Baier's at DePauw University in Indiana. (Baier played varsity golf under the same DePauw coach as former Vice President Dan Quayle, but they were separated by more than 20 years.)

On one recent show, in addition to Hayes, the Fox All-Star panel included Peter Wehner, a conservative columnist who is a former aide to President George W. Bush, and Karen Tumulty, a national political correspondent for The Washington Post.

I asked Baier how that lineup reflected the fairness he promises.

"We really do strive to balance out the panel every night," Baier says. "It's more an analysis — I mean, you're not getting spinmeisters. You're not getting political types. These are actually journalists or columnists and they come from various, you know, organizations."

I reviewed six months' worth of Baier's panels, and the same mix typically prevailed: two clear-cut conservatives and one other analyst. That other person was sometimes a Democrat or liberal — say, former Democratic strategist Kirsten Powers. But usually it was a journalist from a non-ideological news outlet, such as The Hill, Politico, The Washington Post or NPR. (Mara Liasson is a contributor for Fox News.)

As I told Baier, that would seem both to underrepresent the left and also to cast reporters as though they're surrogate liberals.

"I understand your point," Baier said. "I think numerous people can make the case what the administration is trying to do [or] trying to say. That provides a perspective. Not advocating for that position but analyzing it."

Baier and his boss, Clemente, also say they're open to tinkering with the format of the panels.

McIntyre, the former CNN reporter, says Baier has prospered in his two years as an anchor.

"He's cracked the code," McIntyre says. "He's figured out what it is he needs to do with the employer he works for, and I think he's also trying to uphold his personal standards. And I think he does that pretty well."