Accessibility links
In Japan, Shaken Soil Turned Soft After Quake The violent shaking from Japan's March 11 earthquake stirred up the soil, leading to broken water pipes, tilted utility poles and manholes that popped out of the ground. The phenomenon, known as liquefaction, was particularly noticeable in areas built on land reclaimed from the sea. 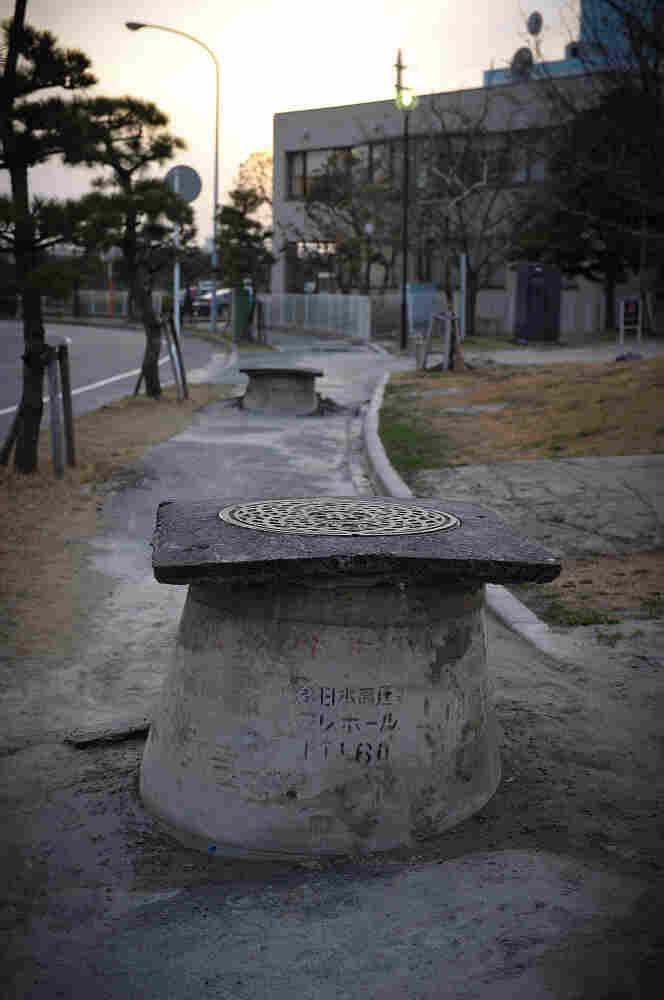 Manholes poke out from the ground in Urayasu, Japan, due to the liquefaction triggered by the 9.0 magnitude earthquake. The phenomenon, which allows sand and water to rise following ground shaking, was particularly pronounced in this area as a result of the long duration of the March 11 quake. Koki Nagahama/Getty Images hide caption

The earthquake that struck Japan on March 11 will be remembered primarily for the devastating tsunami it created. The quake itself did remarkably little damage to buildings in most areas, thanks to strict construction codes. But in a few places, particularly around Tokyo, buildings didn't fare as well.

These are places built on land reclaimed from the sea. When the earthquake struck, the soil in these areas acted like a liquid, a phenomenon known as liquefaction.

People at Shoppers Plaza in a Tokyo suburb called Urayasu got to see liquefaction up close. Amateur videos shot just after the earthquake show people milling about the mall's paved courtyard, waiting for the aftershocks to end.

Then, sections of the courtyard begin to pulse and heave. The pavement buckles. Black liquid flows up through the cracks.

"The ground was moving sideways," says Teiko Kato, who manages a flower shop in the mall. When the quake struck, she had grabbed the shop's most valuable orchid and ran outside.

Within a few minutes, the watery mud had covered much of the courtyard. In places, the ground level dropped as much as a foot. Out on the street, manholes were being pushed up out of the earth. Water pipes broke. Utility poles began to lean.

Kato says she was terrified because she knew what was going on. It was more than just an earthquake — it was liquefaction. The shaking from the earthquake was allowing sand and water underground to rise and things on the surface to sink.

Kato's shop and everything around it is built on land that used to be part of Tokyo Bay; this sort of reclaimed land is highly vulnerable to liquefaction. But it's also cheaper to live here, so Kato and her family had moved in despite the risk.

"We came with dream to have new shining life in nice area," she says. "But I don't know, after experiencing this." 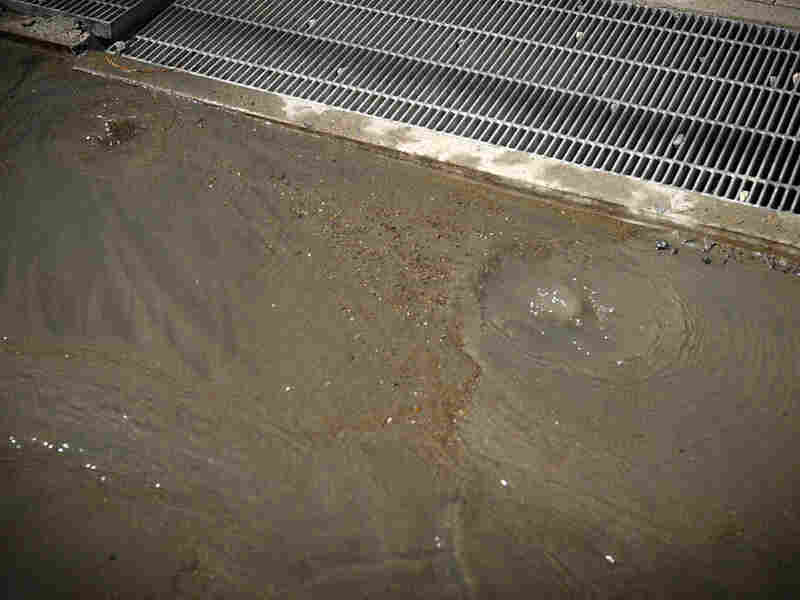 Bubbling water is seen in Chiba, Japan, on March 19, a week after the earthquake. The shaking caused by the earthquake triggered liquefaction, which allows sand and water underground to rise. Koki Nagahama/Getty Images hide caption 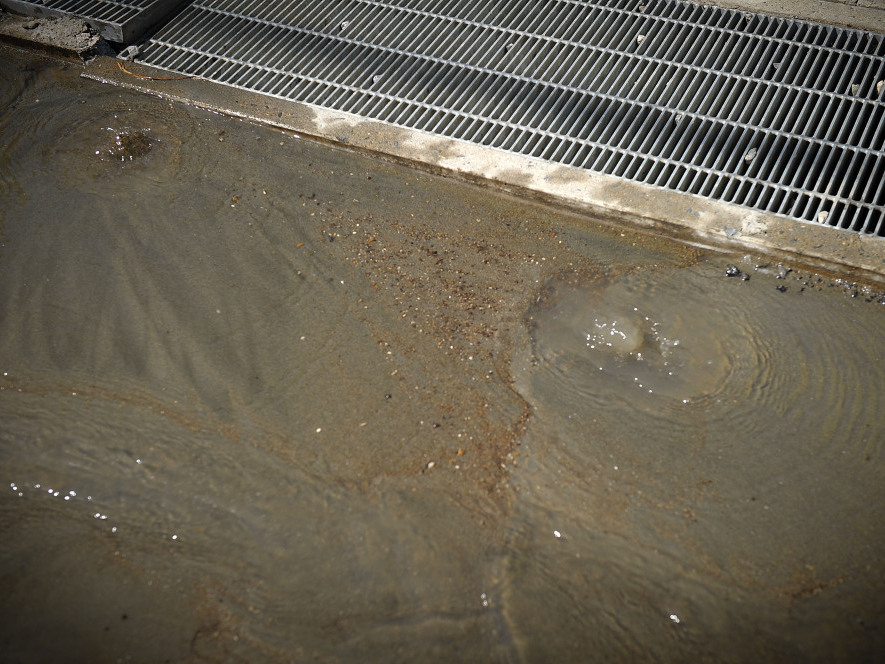 Bubbling water is seen in Chiba, Japan, on March 19, a week after the earthquake. The shaking caused by the earthquake triggered liquefaction, which allows sand and water underground to rise.

Since the earthquake, a lot of engineers have visited Urayasu to figure out precisely what happened. One of them is Ross Boulanger, a civil engineer from the University of California, Davis, who was there on behalf of a group called Geotechnical Extreme Events Reconnaissance.

Boulanger says what happened in reclaimed land around Tokyo Bay is the same thing that happens when you mix beach sand and water in a pail and shake it.

"Soil takes on the appearance of being like a liquid, and that's where the term liquefaction comes from," he says.

But the damage around Tokyo bay was much worse, Boulanger says. He says that's because the Japanese earthquake was much more powerful and went on for a very long time.

In the Loma Prieta quake, "the strong shaking was over in 10 or 15 seconds," he says, "whereas at some of these sites the shaking is going on for minutes." 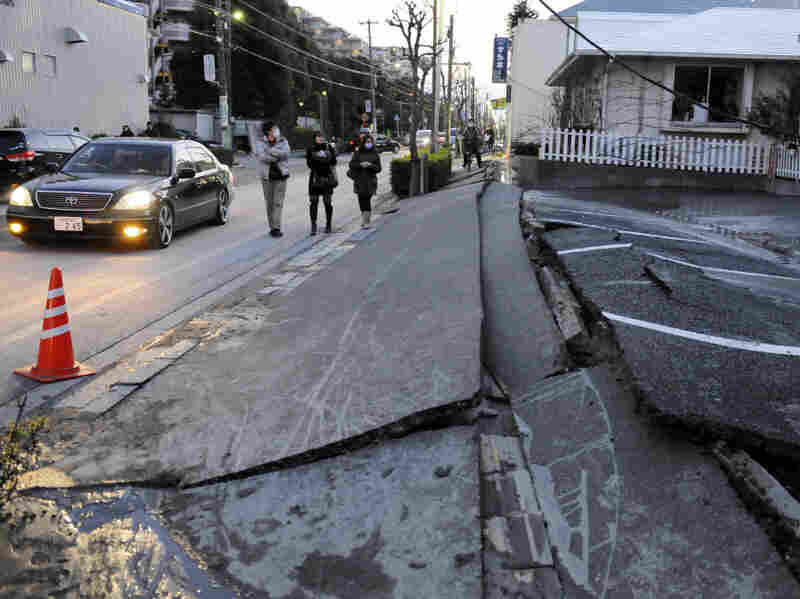 Liquefaction in Urayasu city, outside Tokyo, created an uneven buckling and settling of roads and the surface. Toshifumi Kitamura/AFP/Getty Images hide caption 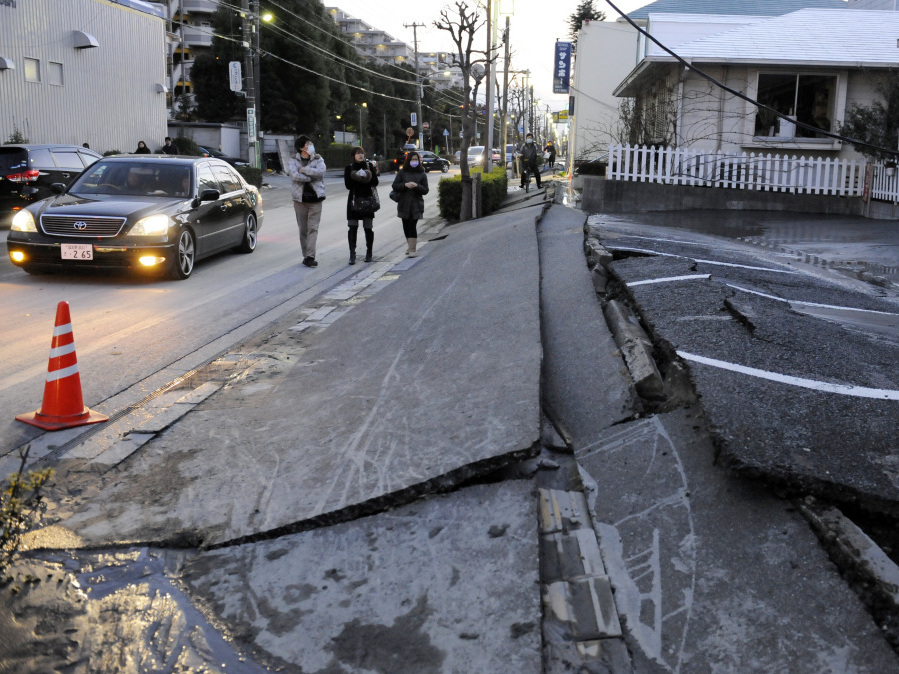 Liquefaction in Urayasu city, outside Tokyo, created an uneven buckling and settling of roads and the surface.

That may be the reason even small houses in Urayasu were damaged. Usually, he says lighter structures built on concrete slab foundations tend to float, even as the ground beneath them becomes like quicksand.

"One of the things we'd never really seen before were very light structures settling and tilting by amounts we hadn't really seen in other earthquakes," Boulanger says.

Surprise At The Severity Of Damage

Takako Utsunomiya lives in one of those structures — a two-story home in an upscale part of Urayasu, not far from Tokyo Disneyland.

On an afternoon several weeks after the earthquake, Utsunomiya is sweeping the path from her front door as two masked workers shovel mud from a walkway beside the house. The house is still intact on its concrete slab, but you might not want to live in it.

"It's really tilted and distorted," Utsunomiya says. Inside, she says, "you feel dizzy because the floor is tilted."

And that's just one problem, she says. When the ground began to shift, pipes carrying water, gas, and sewage all broke. Now, the nearest water is a temporary pipe two blocks from her home, Utsunomiya says.

She says she was warned about liquefaction when she moved to this area 20 years ago.

"We knew that our house is on the reclaimed land and even the city office informed us," she says. But she was surprised that the damage could be so severe, she says.

All the damage in Urayasu offers some lessons for the future, engineers say. There was much less damage at nearby Tokyo Disneyland, which is also built on reclaimed land — that's because Disney spent a lot of money to pack down the loose soil before building a theme park on it.