Accessibility links
The Nation: Blame Both Parties For Shutdown Threat With no budget deal agreed upon as of yet, the Friday's deadline to avoid a government shutdown inches closer. Ari Berman of The New Republic argues that a mixture of Democratic cowardice and Republican stubbornness is what brings us to the brink of a government shutdown.

The Nation: Blame Both Parties For Shutdown Threat

The Nation: Blame Both Parties For Shutdown Threat 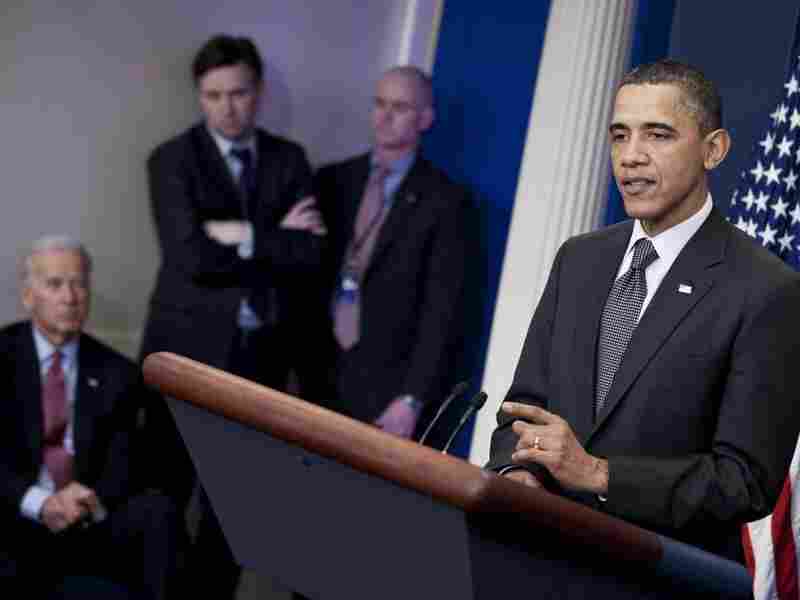 President Barack Obama speaks to the press after a meeting with Senate Majority Leader Harry Reid and Speaker of the House John Boehner to break a stalemate in budget negotiations. The standoff could force the federal government to close on Friday. Brendan Smialowski/Getty Images hide caption 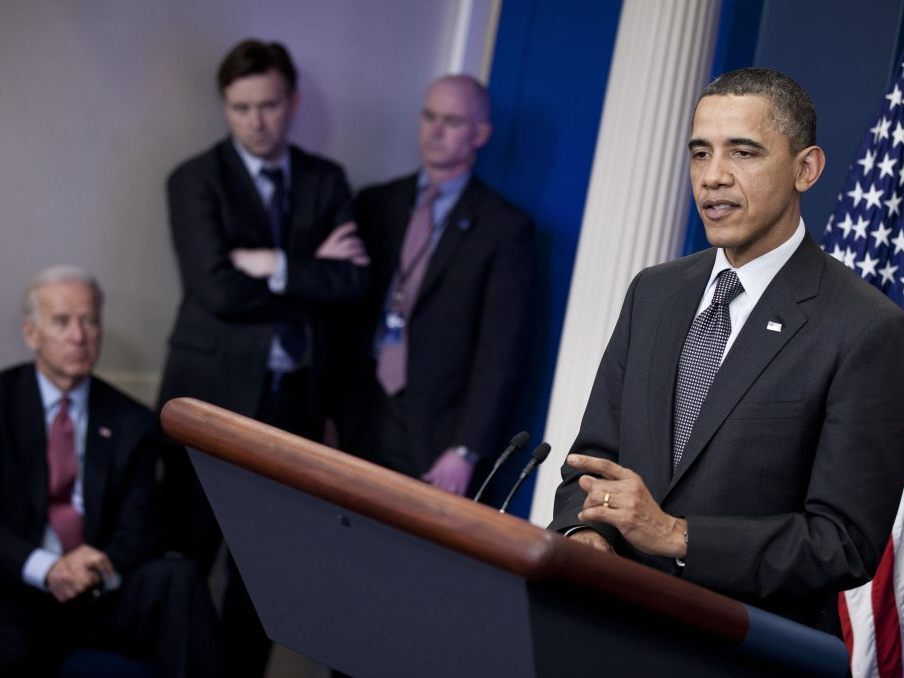 President Barack Obama speaks to the press after a meeting with Senate Majority Leader Harry Reid and Speaker of the House John Boehner to break a stalemate in budget negotiations. The standoff could force the federal government to close on Friday.

InTrade says there's a 52 percent chance there will be a government shutdown before July. The brinksmanship and theatrics aside, I've long believed a shutdown would be averted and a budget deal reached for 2011–12. Now I'm not so sure. Some in the GOP are eagerly cheering on the prospect of a shutdown (literally), with the conservative Republican Study Committee even unveiling a countdown clock on its website (as of this post, there's two days, ten hours, three minutes and five seconds left).

A mixture of Republican stubbornness and Democratic timidity has brought us to this point. Democratic leaders could have passed a budget before the 2010 elections or during the lame-duck Congress, when they held large Congressional majorities, but by punting on the issue, they empowered the new House Republican majority, whose number-one issue in the 2010 election was cutting government spending. In February 2011, House Republicans passed $60 billion in spending cuts for 2011 by targeting the usual suspects — eliminating funding for Planned Parenthood, preventing the EPA from regulating greenhouse gas emissions, blocking the implementation of healthcare reform, cutting off support for NPR, PBS and AmeriCorps. Their bill looked much more like an effort to defang longtime opponents and score political points than a responsible attempt to actually balance the budget or create jobs. Goldman Sachs predicted that the plan would halt economic growth by 1.5 to 2 percentage points in the coming year, while Moody's forecast it would cost 700,000 jobs.

Since then, Congress has twice temporarily kept the government running, and it looked as if John Boehner and Congressional Democrats had recently struck a deal to cut $33 billion from the budget for 2011-2012. But Boehner denied there was any deal, and promptly upped the number to $40 billion in cuts. Every time a deal looks imminent, the GOP raises the stakes, in the hopes that Democrats will take the bait (a pretty good assumption, given the deal reached to extend all the Bush tax cuts in December 2010). And these negotiations have been held in secret, so no one actually knows what any final deal will entail (how reassuring). Shutdown or not, the public is unlikely to be happy with the final outcome.

What would a shutdown look like? Here's how CBS News described what happened in 1995:

The shutdown resulted in a backlog of hundreds of thousands of passport and college applications, the closure of national parks (including the Grand Canyon), failure to process new Medicare claims and the suspension of many government services. In addition, 760,000 federal workers were furloughed during the impasse. (Their pay was reinstated when Mr. Clinton signed a measure to fund the government in early 2006.) The Office of Management and Budget estimated that the 21-day shutdown, together with a six-day partial government shutdown in November 1995, ended up costing more than $1.25 billion.

Another shutdown could force troops to fight without pay and would likely imperil the country's fragile economic recovery. It would make both parties appear like squabbling adolescents (even more than they already do) and reinforce the belief that Washington is ungovernable, which would ultimately hurt President Obama, who wants to seem like a bipartisan problem-solver. That's why Obama pollster Cornell Belcher told me a few months ago that that a shutdown today would be "devastating for both parties."

Despite the alarming projections of how the House Republican budget would harm the country, it's the Democrats who have been on the defensive during the budget debate, principally because President Obama has declined to seriously engage in the discussions or outline an alternative narrative on the economy that is distinct from the GOP. Though they hold only one house of Congress, House Republicans act like they're in control of the entire government, with little pushback from the White House or Senate Democrats. Both parties now endorse the idea that spending cuts are the best cure for our ailing economy, even though there is no evidence that is the case.

Obama has said that he was perceived as too much of a "tax and spend liberal Democrat" in the last election, so his administration has moved to the right as a result — despite the fact that poll after poll shows that the public believes the unemployment rate is a far more pressing problem than the deficit. "The White House, in particular, has effectively surrendered in the war of ideas," New York Times columnist Paul Krugman wrote recently. "It no longer even tries to make the case against sharp spending cuts in the face of high unemployment." Throughout this budget fight, we've been having the wrong economic debate, as my colleague Katrina vanden Heuvel noted this week. Both our political and media class are guilty of focusing obsessively on spending cuts while ignoring the public's overriding priority: jobs.

House Republican Budget Committee Chairman Paul Ryan, an instant media darling, raised the stakes of the debate this week by finally unveiling his radical budget plan for 2012 amidst much fanfare and coverage. Here's how the Economic Policy Institute characterized what Ryan's plan would do:

The budget, among other things, includes a plan to privatize Medicare by forcing recipients to buy insurance on the open market, to gut Medicaid by shifting costs to states and reducing funding, to cut taxes on corporations and wealthy individuals, and to reduce the nation's ability to make needed investments by capping overall levels of federal spending. The plan would not only put the fragile recovery at risk, but it would also undermine economic growth and job creation for years.

This budget is impressive in its ability to not only inflict maximum harm on the economy, but to concentrate that harm on those most in need. This will not only cost the economy hundreds of thousands (and perhaps millions) of jobs over the next five years, it will also destroy the social safety net and undermine policies that support the middle class.

Two-thirds of the cuts in Ryan's plan, according to the Center for Budget and Policy Priorities, would harm programs like Medicare and Medicaid that help lower-income Americans. None other than Oklahoma Senator Tom Coburn, one of the most conservative Republicans in Congress, admitted this week that Congress will never balance the budget without raising taxes, an argument few Republicans will make and Democrats vacated when the Obama Administration agreed to temporarily extend the Bush tax cuts.

Boxed in by the GOP, the Obama administration may have no choice but to cut a bad deal with Boehner in order to avoid another government shutdown. But that doesn't mean Democrats can't aggressively critique Ryan's plan and begin to frame the budget fight on their terms for 2012. Just because Obama kicked off his re-election campaign with a substanceless video doesn't mean he can afford to be MIA on the biggest issue of the day.

No Big Breakthroughs As Budget Deadline Looms April 7, 2011
Essential Vs. Not: Which Jobs Wouldn't Shut Down? April 7, 2011
Budget Brinkmanship: What Would A Shutdown Look Like? April 6, 2011