Accessibility links
Violence Surges At Hospital For Mentally Ill Atascadero State Hospital in central California was built to treat criminals who are mentally ill. But since 2006, assaults on staff have risen markedly. Employees blame the increase on a federally enforced plan that they say requires them to spend more time on paperwork than treating patients. 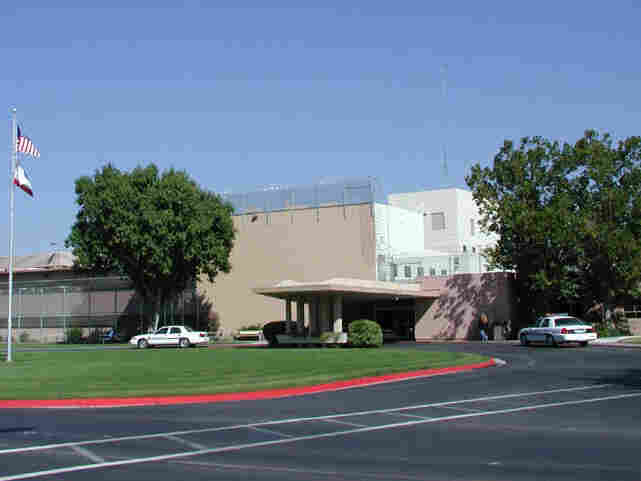 Atascadero State Hospital, in central California, was built to treat mentally ill criminals. Since a new treatment plan was put into place, violent incidents at the hospital have increased. "I have constituents who ... work in the facility that are just distraught about their sense of threat and risk and potential injury," says one state lawmaker. Courtesy of Atascadero State Hospital hide caption

Atascadero State Hospital, on California's central coast, was built from the ground up to treat mentally ill criminal offenders.

Violence is on the rise at the hospital, and according to state and federal documents, it's gotten worse since 2006 — the same year the state signed an agreement with the federal government to put in a detailed new treatment plan.

The 92-page plan, which covers everything from psychiatry to dentistry to nutrition, came out of a civil rights investigation — something the Justice Department has done at a lot of public hospitals around the country. In California, the investigation found some serious problems: abuse and neglect of patients; substandard care; and lousy record-keeping.

The new treatment plan was supposed to make things better. And it did, according to Justice Department documents and some conversations with hospital staffers. But violence has risen at three of the four hospitals covered by the treatment plan. At Atascadero, it's gone up 36 percent.

That's what brought Republican state Sen. Sam Blakeslee there recently — and not for the first time.

"I have constituents who ... work in the facility that are just distraught about their sense of threat and risk and potential injury," he says. "And it's just an inherently dangerous population."

But the hospital appears more blandly institutional than dangerous. The halls seem endlessly long. The patients wear identical khaki pants and shirts, and usually stare straight ahead as they walk. In the day room, no one looks up from the television when visitors walk in.

"You know, that's how things are most of the time," says Blakeslee. "And when things change, it changes very quickly."

A former psychiatric technician named Ramona Goodman found that out the hard way.

'We Began To Struggle'

In September 2008, a patient made a routine request: He wanted some clean socks from the laundry room, which was down the hallway.

"So he and I walked down the hall," she recalls. "And as we were walking together, I had asked him: So you had a really hard time this weekend, and do you want to talk about that later with me? Maybe we can get things worked out? 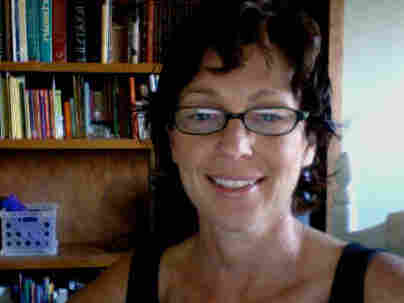 Ramona Goodman, a former psychiatric worker at Atascadero State Hospital, was attacked by a patient in 2008. Courtesy of Ramona Goodman hide caption

And then they reached the laundry room door.

"I got my key in the lock, and I felt his arm come around underneath my chin. And I dropped my chin down as far as I could into my neck so he couldn't choke me out," she says. "So we began to struggle. He was hitting me alongside the head as I was biting him. And after a couple of minutes, I realized I was not going to win this fight."

Eventually, she managed to scream and a co-worker came to her rescue.

Goodman now has two artificial discs in her neck held in place by a titanium plate. Her surgeon told her she can't work at Atascadero anymore.

"Because I could get knocked down, or whatever, and be paralyzed," she says.

The attack was one of more than 1,000 violent incidents at Atascadero that year. Goodman blames the treatment plan the hospital was forced to adopt after the Justice Department's investigation. She says it drove a wedge between the staff and the patients by requiring massive amounts of documentation.

"Spending more time on paperwork than you are treating the patient," she says. "That's really the security problem right there."

In 2006, a treatment plan was put in place to help make the hospital safer. Instead, assaults by patients — against both staff and fellow patients — are on the rise.

Walters left Atascadero about a year and a half ago after working there for nearly two decades. He says something else changed when the hospital went to the new treatment plan: Their safety program was disbanded. It had won awards and been cited as a national model.

"They made it a hospital-wide mantra that safety was the first consideration," he says. "And they did a really fine job of it."

In 2008, the hospital started a new committee to deal with violence after a patient was murdered by a fellow patient.

NPR spoke with a number of current staffers at Atascadero but isn't using their names because they've been warned not to speak to reporters without going through hospital administration.

The employees mostly share Walters' skepticism about the plan calling for patients to identify their own goals and interests in choosing treatment options.

That, they say, is poorly adapted to a psychiatric hospital that treats felons and people who had committed violent crimes.

California is the only state where the Justice Department has imposed this regimen on hospitals that exclusively treat mentally ill criminals. California's second such hospital, Patton State Hospital in San Bernardino, has also seen violent incidents rise by 36 percent.

The public has a right to expect that these individuals will get the treatment to make them less dangerous, because ultimately many of these people will be back on the streets.

The Justice Department declined requests for an interview. NPR also tried to speak with the court-appointed monitor who tracks California's compliance with the treatment plan, but he's barred from speaking with the media.

The treatment plan does have a champion, though, in Jon DeMorales, the executive director of Atascadero. He welcomes the demands the plan has made on the hospital — demands "that we establish reasons for commitment, discharge goals, obstacles to discharge, and [that are] geared to the strengths and weakness of an individual," he says.

Its goal, he says, is to give patients "a realistic opportunity to recover from the reasons that led to their commitment here."

That's not to say the plan can't be improved. California's agreement with the federal government expires later this year. DeMorales says he's already cutting down on those paperwork requirements in order to reduce his staff's workload and allow them to spend more time with their patients.

Walking through the hospital, Sen. Blakeslee says there are things that have nothing to do with the treatment plan that can make this place safer — like new furniture. 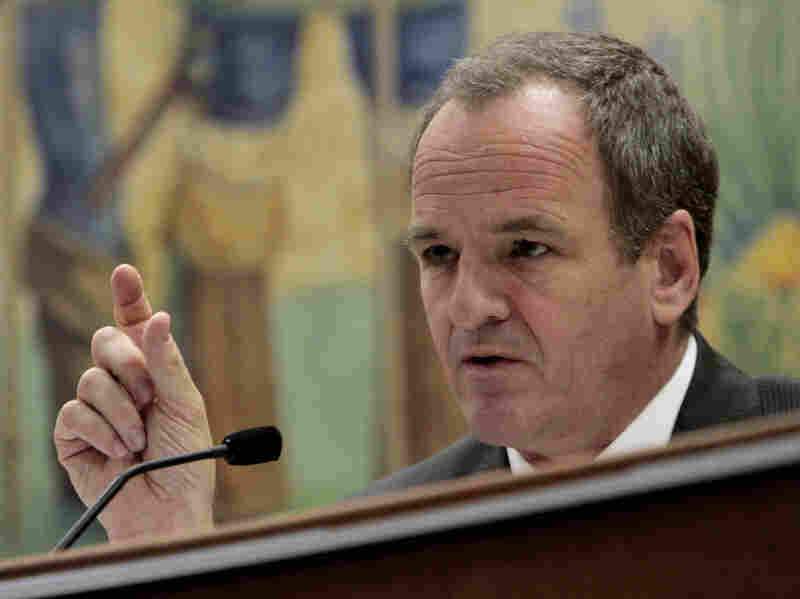 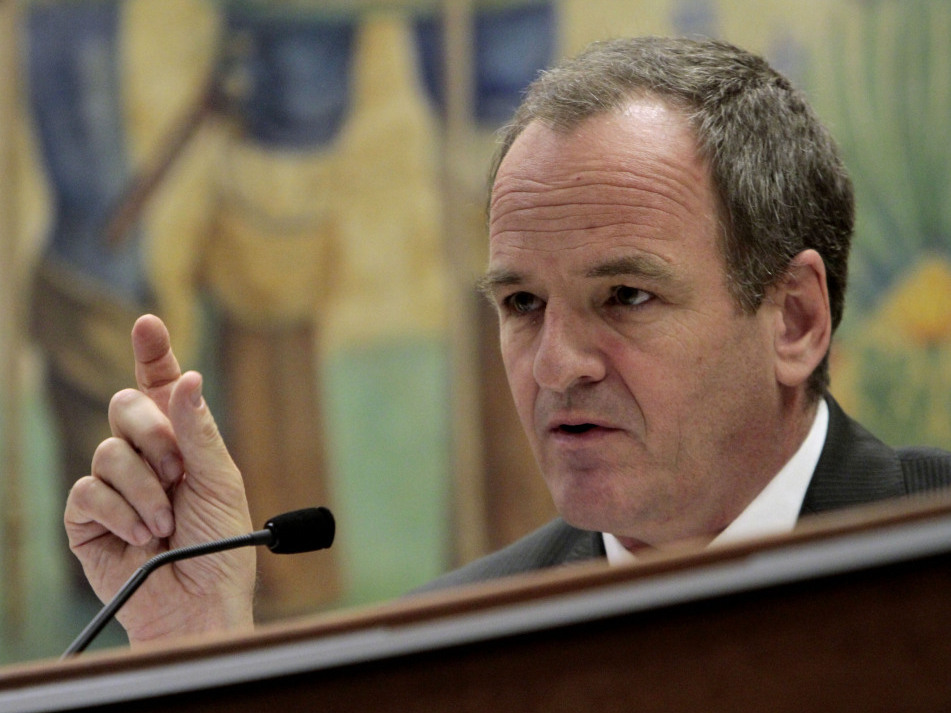 Republican state Sen. Sam Blakeslee, shown at a committee hearing earlier this year, says the Atascadero hospital has "an inherently dangerous population." He's proposed new laws designed to make the hospital safer, including a bill that would make it easier to medicate patients against their will.

"You notice the chairs are intentionally so heavy that they're almost impossible to pick up and throw," he says.

But ultimately, Blakeslee thinks it'll take new laws to make the hospitals less dangerous. Other lawmakers agree. There are now at least half a dozen measures pending in the state Legislature, all focused on hospital safety.

One of Blakeslee's measures would make it easier to medicate patients against their will. "Those that are acting out and behaving in a way that could impose a risk to themselves, to other staff and other patients," he says.

In the end, says Blakeslee, it's a matter of keeping faith with the taxpayers who are spending more than $500 for each day a patient stays in the hospital.

"The public has a right to expect that these individuals will get the treatment to make them less dangerous, because ultimately many of these people will be back on the streets," Blakeslee says. "They'll be our neighbors, they'll be at our grocery stores. Our kids will walk by their homes."

And they won't be less dangerous on the streets, he says, if they're trying to get well in a violent place.