Accessibility links
Movie Review - 'Your Highness' - Low Comedy's Crowning Moment of Awesome? James Franco and Danny McBride set off on a quest in David Gordon Green's action comedy Your Highness — a sword-and-sorcery spoof that David Edelstein says is fantastic if you're in the right gross-minded juvenile mood. 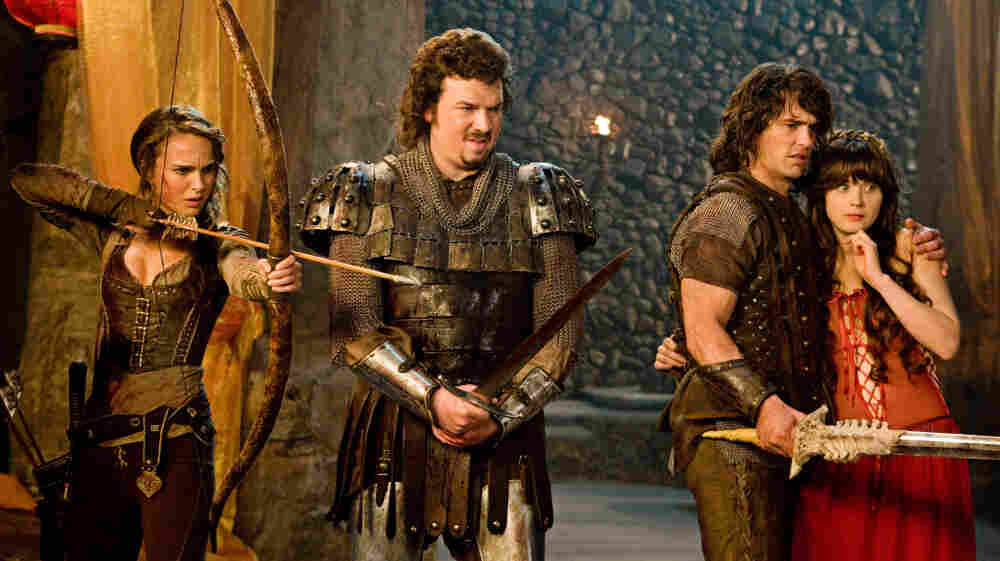 Rated R for strong crude and sexual content, pervasive language, nudity, violence and some drug use

'This Woman Is Mad!'

'This Woman Is Mad!'

'It's Me! You're Still A Prisoner'

'It's Me! You're Still A Prisoner'

The humor in the medieval sword-and-sorcery spoof Your Highness is low. Lower than — it's hard to find an adequate simile. The deepest, rankest pits of Adam Sandlershire. The filthiest pools of Kevin Smithport. The crude and gratuitous sexual references cease only during battle scenes featuring geysers of gore, and even then there are things — things involving, say, minotaur anatomy — of which I cannot speak here. What makes Your Highness such a riot is that it's all played straight.

James Franco plays the the gallant crown prince Fabious, who has embarked on a quest to rescue his fiancee, Belladonna (Zooey Deschanel) from a villainous wizard. Accompanying Fabious is his pudgy brother Prince Thadeous, our protagonist — a cowardly braggart and incorrigible lech played by the movie's star and co-writer, Danny McBride.

Franco's Fabious is hearty and generous-natured, every inch the medieval knight with just a whiff of dreamy surfer cool. McBride plays it straight, too, both in the sense that Thadeous speaks earnestly, his diction formal apart from the odd insertion of disgusting slang, and in the sense that he is believably consumed from morning till night with either having or talking about sex.

What's missing is camp — the wink and the leer, the fey exaggeration that was once the province of drag shows and is now the stuff of mainstream sitcoms. McBride, Franco and director David Gordon Green love the sword-and-sorcery genre as much as they love making a travesty of it, so Your Highness actually works as an action-adventure picture — a cunning weave of low and high, regal and smutty, splendiferous and splattery, with special effects both awesome and just a shade tacky.

Franco is a marvel — as he often is outside certain awards shows — and he'd have walked off with the picture if not for a couple of genius clowns, among them a skinny, rubber-faced performer named Rasmus Hardiker, who plays Thadeous's squire.

But Your Highness belongs to actor and writer Justin Theroux. His evil wizard, Leezar, has the requisite grand manner — the sculpted gestures, the thunderous elocution — until he spills over into hysteria and gives you a glimpse of the embittered nerd beneath. He's so unhinged he's actually scary. He has three shrieking-harpy old "mothers," and what he plans to do with Deschanel's Belladonna is too filthily convoluted to relay. It goes beyond kinky, into the farthest-out reaches of hinky. 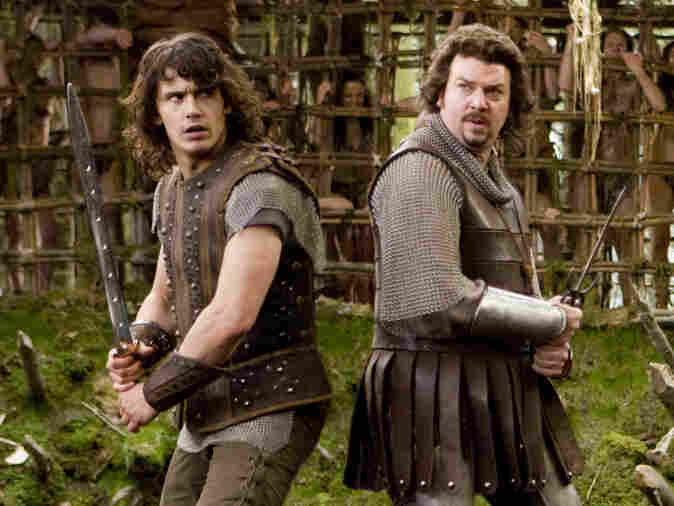 Then there's Natalie Portman as Isabel, a fearless warrior, crack archer and fiery avenger who joins the knights midway through the picture and shortly thereafter takes a semi-naked swim. Frankly, Portman comes off like a middling high-school actress, her voice thin, her accent wobbly. It's hard to tell if she's acting badly or playing the kind of bad actress you see in B movies of this ilk. Whichever, it works like gangbusters. She looks great in her slender Robin Hood get-up, and she has the perfect swift-yet-tinny cadences for fending off McBride's advances.

I love this movie, but be warned: It's a long way from the sophisticated Oxbridge silliness of Monty Python and the Holy Grail or the Catskills drollery of The Princess Bride. In his zest to show the dark side of machismo, McBride is often merely gross. But if you yourself are a gross-minded juvenile, or in the right gross-minded juvenile mood, Your Highness delivers on its title: It gives you a royal high.