Accessibility links
Post-Revolution Tunisia Faces Economic Woes While the transitional government in Tunisia tackles challenges like how to agree on a constitution, it faces another problem: the state of the economy. Tourism is down drastically, as is money that used to flow from Libya. 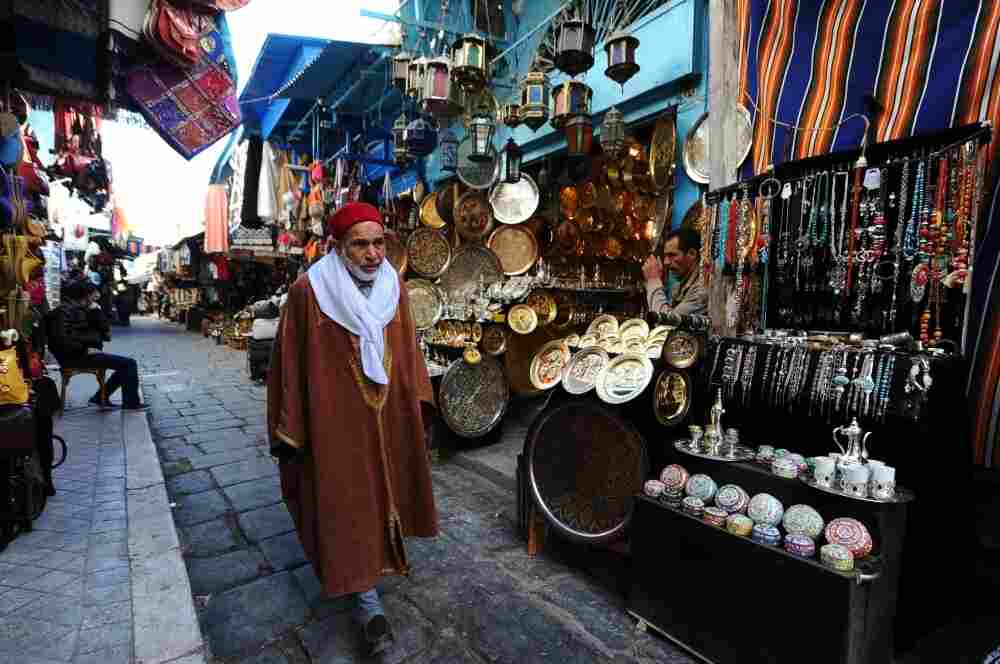 A Tunisian man walks through a medina in February. Today, the shops are suffering for lack of tourists. "The tourism is catastrophic in Tunis today," says Said Ayari, who sells handicrafts like traditional pointed leather shoes. Fethi Belaid/AFP/Getty Images hide caption 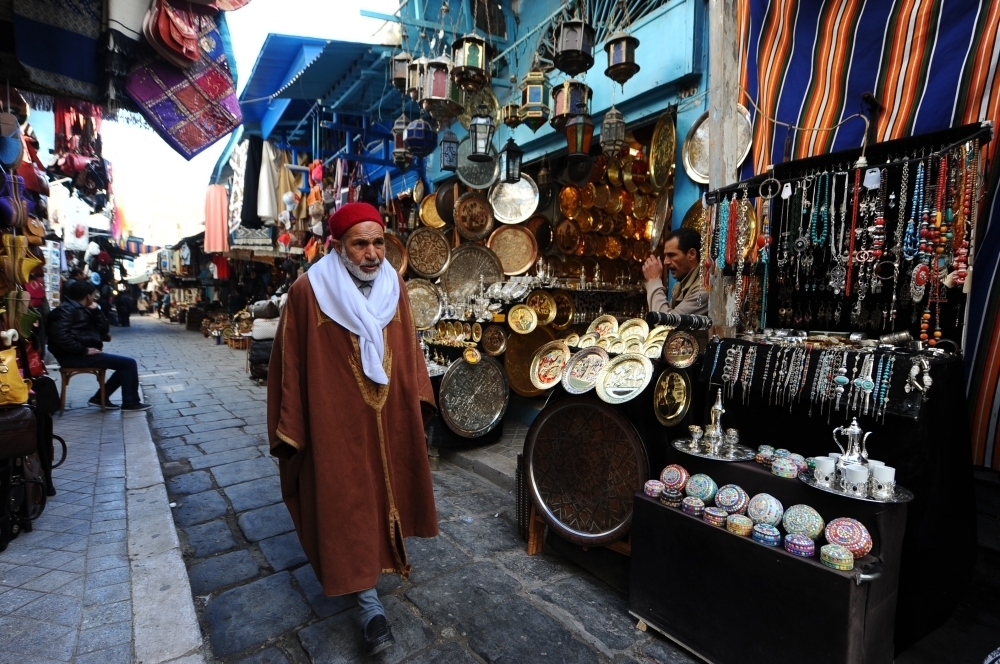 A Tunisian man walks through a medina in February. Today, the shops are suffering for lack of tourists. "The tourism is catastrophic in Tunis today," says Said Ayari, who sells handicrafts like traditional pointed leather shoes.

In Tunisia, a transitional government is in the midst of tackling predictable challenges like how to agree on a constitution and how to organize an election.

But there's another problem the government faces: the state of the economy.

In the warrens of the medina — the old city of Tunis — merchants in their covered stalls, packed with every sort of merchandise, know that tourists may avoid a country that's working its way through a largely peaceful revolution, with an occasional protest that turns violent. And they're not happy about it.

Said Ayari sells handicrafts like traditional pointed leather shoes. He says there used to be many tourists at the market, but not anymore.

"The tourism is catastrophic in Tunis today," he says.

The tourism sector is in a "deep crisis," says Mahmoud Ben Romdhane, an economist and a senior member of one of the bigger Tunisian political parties — The Ettajdid, or Renewal Movement.

In this country of 10.5 million, tourism represents more than 5 percent of the economy. 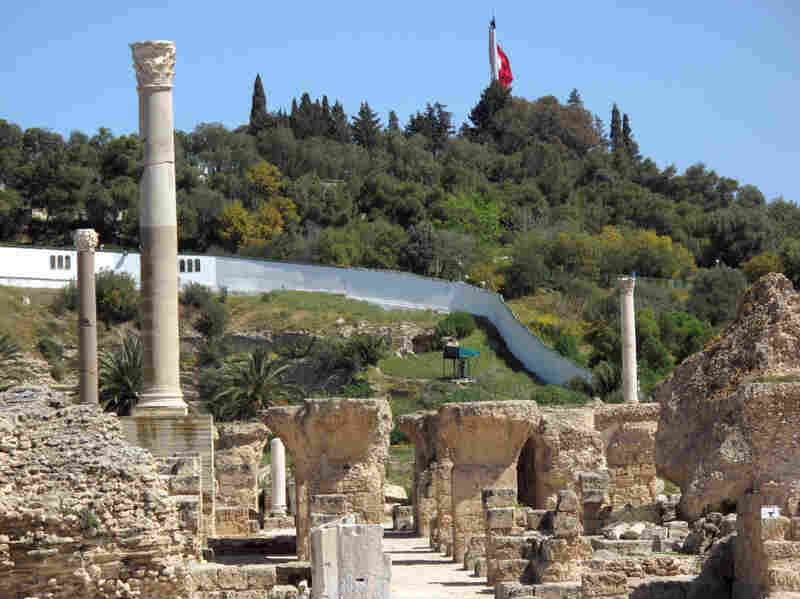 The ancient ruins of Carthage in Tunis are usually bustling with tourist groups in April. But now it's most empty. Art Silverman/NPR hide caption 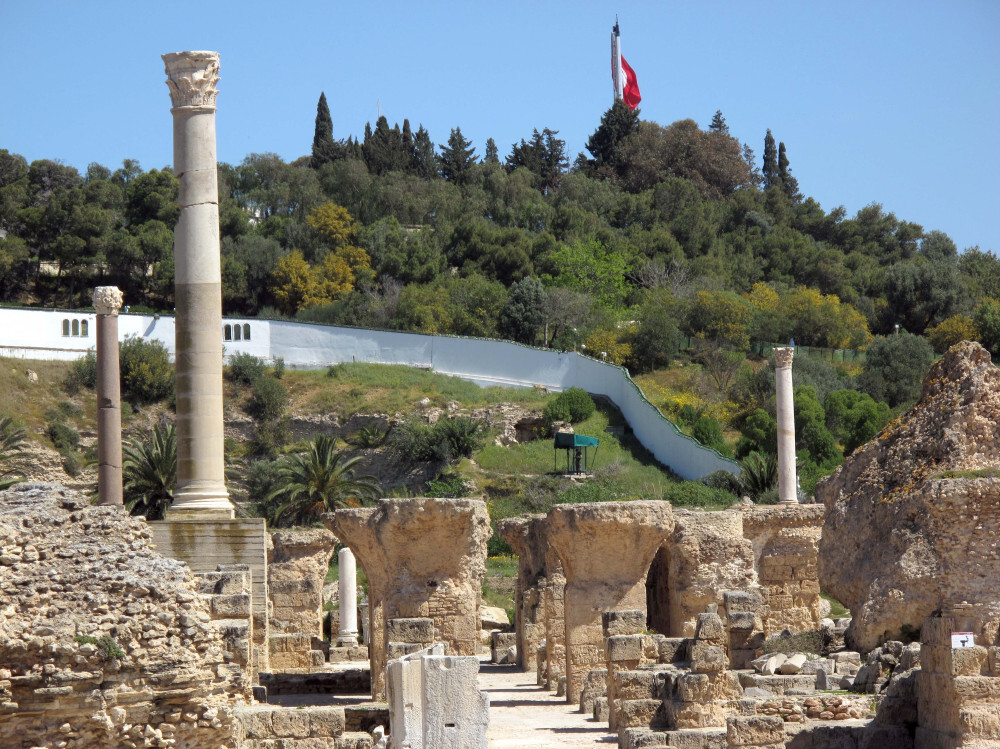 The ancient ruins of Carthage in Tunis are usually bustling with tourist groups in April. But now it's most empty.

One of the main tourists draws is the ruins of ancient Carthage in Tunis. On one particular day, tour guide Tarak el Ghozzi leads 10 American tourists through a breathtakingly beautiful spot along the Bay of Tunis. An idyllic green hillside dotted with palm trees slopes toward the remains of the second century Antonine Baths. Beyond the ruins, the perfectly bright blue Mediterranean blends into a paler blue sky at the horizon.

But this tourist heaven is empty, except for a few Americans. People are evidently afraid of instability and the war next door in Libya. But Mary Bohls, an 84-year-old retired CPA from Austin, Texas, says she wanted to come — even though family and friends made fun of her.

In a typical season, el Ghozzi says, the place would be bustling with people.

"This time of the year, there would be all of the cruise ships, there'd be thousands of people here, there'd be hundreds of buses," he says. "And I would have only three minutes here to talk to the people and have to move aside for other groups to take the place. I mean, it's a big damage. It was hit terribly. Over 2 million Tunisians living from tourism. ... They don't have an income, they have to rely on their families' support."

At a posh restaurant in the Casbah, the old downtown near the prime minister's office, business is down more than half compared with last year. And that's just the beginning of the impact of the regional revolutionary wave on Tunisia's economy.

At Tahrir Cafe in the working class neighborhood of Ariana, a Tunis suburb, a couple dozen men play cards on the battered metal tabletops. The midday news from Al Jazeera is on the TV on the wall over two men playing chkobba, which resembles the card game War. On the television, amid scenes of protest from Egypt, Yemen and Iraq, there are reports on the conflict in neighboring Libya. Its effects in Tunisia are palpable.

Ben Romdhane says that if Tunisia has lost 5 percentage points in economic growth this year, 3 to 4 points of that loss are due to Libya.

"First, we had every year 1.5 million Libyans coming here and visiting Tunisia," he says. "And they have high income. Two, we have tens of thousands of Tunisians working there, sending money to the families, transferring income. They have now come back to Tunisia and we have to give them money. Three, we had trade with Libya, which was a source of income for thousands of families living close to Libya. This trade is disappearing. I was going to tell you this was independent of the Tunisian revolution, but it is not true," he says with a laugh. "Because we inspired them."

Ideally, the Libyan conflict will end someday, Tunisia's political elites will hammer out their constitutional compromises, and the tourists and the Libya trade will return. That still would leave Tunisia with some huge economic problems — the kind that led a desperate fruit vendor to set himself on fire and ignite the revolution that inspired the region.

There's high unemployment and under-employment among young people in Tunisia. And the country's interior is far less developed than the coast.

Some wonder whether a democratic government could do any better at creating jobs for a population that is very young and increasingly well-educated. 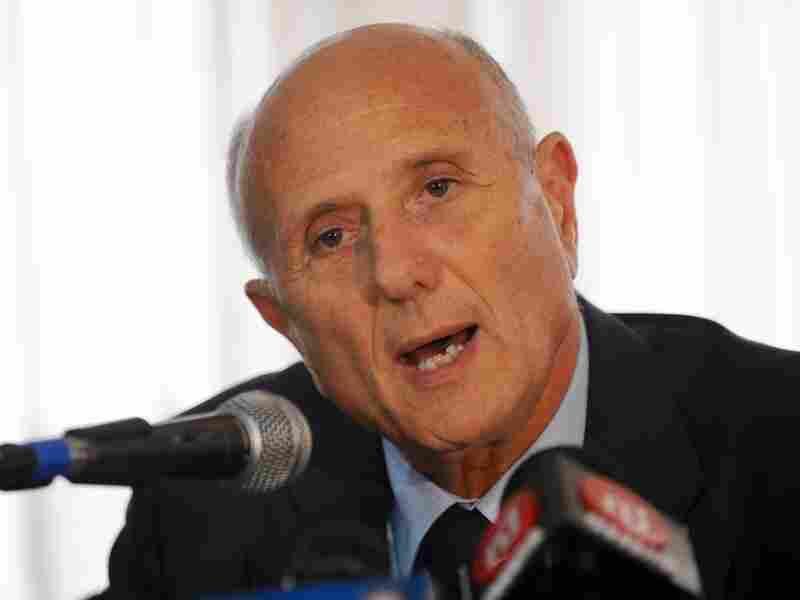 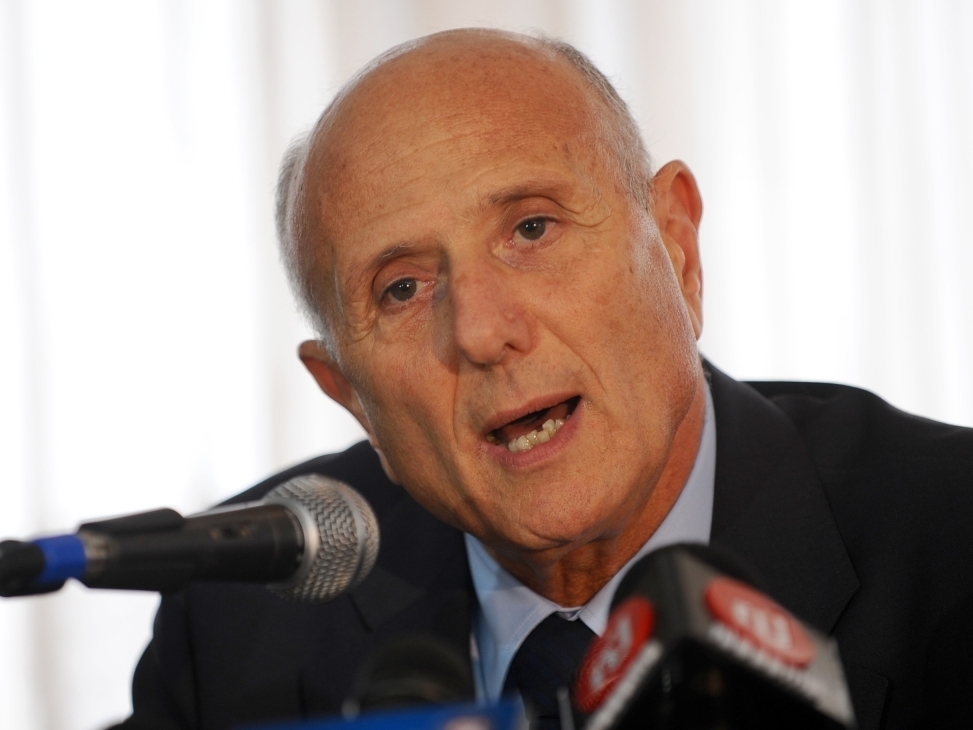 Ahmed Nejib Chebbi, pictured here when he stepped down from the interim government March 1, says that ending the rampant corruption of the Ben Ali regime will spur economic growth.

Ahmed Nejib Chebbi, the founder of the Progressive Democratic Party, says he has a program to address these issues. The man who could be the country's next president says that ending the rampant corruption of the former regime of Zine El Abidine Ben Ali will spur economic growth.

"With democracy and good governance, first we will have more growth because nepotism, the abuse of power and so on hampered the growth," he says.

Chebbi is a lean, balding lawyer whose elegance at age 67 belies his youth as a student protester. For that, he spent two years in jail in the late 1960s.

Down the road, he says, he sees an upside to the very regional upheaval that is currently hurting Tunisia's economy.

"With the new conditions in Tunisia and in the whole region, if the revolution succeeds in Egypt and Libya, we will have huge market that will help for investment in that region," he says. "And that will be a factor of growth. We are optimistic about our ability to succeed in growth more than before."

That's long-term vision. For the considerable tourist sector, there would be a short-term solution — if only the Europeans and the Americans would come back.

In Tunisia: 'We Have No Idea' If Secular Or Islamist Views Will Prevail April 7, 2011
Revolutions: The Dictators Are Gone, Now What? March 30, 2011