Accessibility links
A Poetry Critic Asks: Why Bother? If you've ever been afraid to pick up a book of poetry, critic David Orr can help. His new book, Beautiful & Pointless: A Guide to Modern Poetry, aims to demystify this often-overlooked art. 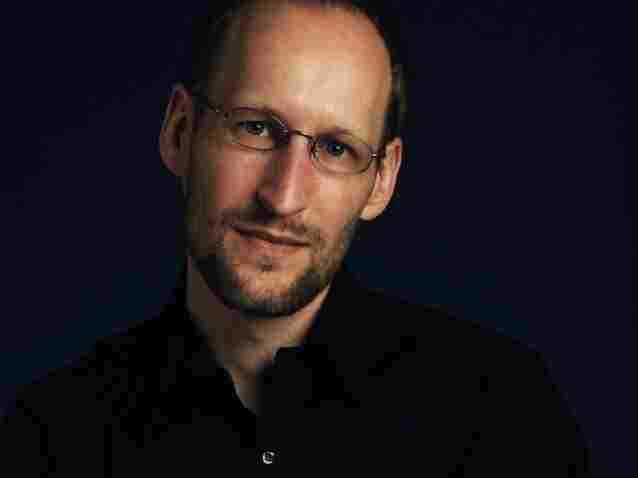 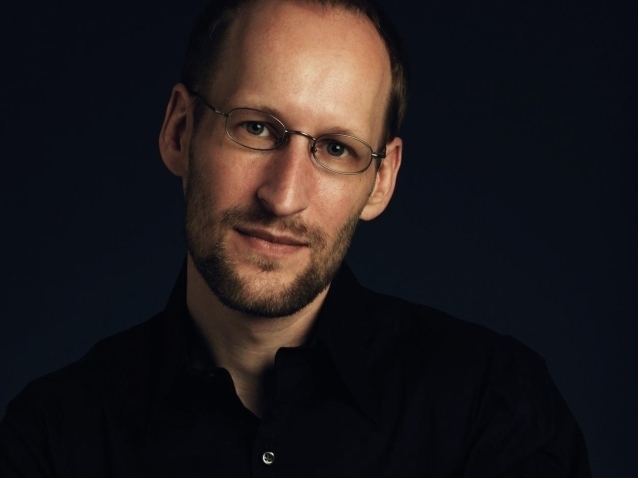 David Orr is the poetry columnist for The New York Times Book Review.

Shall I compare thee to a summer's day? Well ... maybe not. It seems a lot of readers these days are leaving poetry on the shelf. It's too obscure, it's too challenging, and it's just not enjoyable.

David Orr is the poetry critic for The New York Times, and he's on a mission to bring readers back to this under-appreciated art form. His new book is called Beautiful & Pointless: A Guide to Modern Poetry. It's a slender little volume divided into six chapters, each demystifying an aspect of poetry.

Orr tells Weekend All Things Considered host Linda Wertheimer that he wanted to take a broad approach, rather than recommending specific poems.

"I intentionally didn't set the book up as an exploration of individual poets," he says. "What I hoped to do instead was sort of outline these themes, and then as readers come to different poets that they like, the reader would feel inspired to go and look the poets up."

The final chapter of Orr's book asks what might be the most important question: Why bother? Why read poetry at all?

And Orr has a rather surprising answer: "I don't know that people ought to bother. I think that poetry is one of those choices you make in life that's ... it's not really susceptible to reasoning or arguments."

Orr says he reads poetry because it helps him negotiate the world around him and understand his own feelings about that world.

"And also, just because it entertains me," he adds. "I think a better way to approach the question 'why bother?' is not to answer it — but rather just to say that if you do bother, it can be worthwhile." 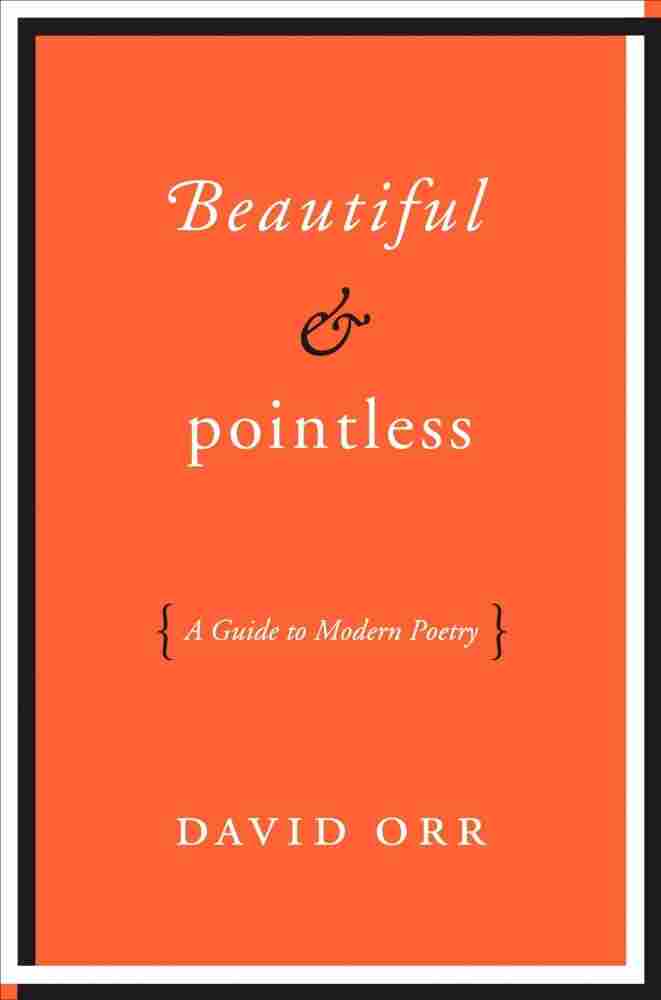 This book is about modern poetry. But a book about modern poetry can't be as confidently "about" its subject as a book about, say, college football or soap operas or dog shows or the pastas of Northern Italy. That's because poetry is poetry — it supposedly comes to us wrapped in mystery, veiled in shadow, cloaked in doubt, swaddled in...well, you get the idea. Consequently, the potential audience for a book about poetry nowadays consists of two mutually uncomprehending factions: the poets, for whom poetry is a matter of casual, day-to-day conversation; and the rest of the world, for whom it's a subject of at best mild and confused interest.

This has all been said before. For decades now, one of the poetry world's favorite activities has been bemoaning its lost audience, then bemoaning the bemoaning, then bemoaning that bemoaning, until finally everyone shrugs and applies for a grant from the National Endowment for the Arts. Typically, because these are poetry readers we're talking about, the titles of these lamentations and counter-lamentations are masterstrokes of stoic understatement. Like:

After the Death of Poetry (Vernon Shetley, 1993)

No matter which side the author happens to favor, the discussion tends to take on a weirdly personal tenor, as if poetry were a bedridden grandmother whose every sniffle was being evaluated for incipient pneumonia. And as with most potential deathbed scenes, the mood among the gathered family wavers between self-satisfied moralizing and an embattled, panicky vigilance.

This book is not concerned with that debate — or at least, not with the usual terms of that debate. It will not focus on events that may or may not have occurred ninety years ago that may or may not have lost an audience that poetry may or may not have possessed; nor will it attempt to determine whether poetry is dead or alive, comatose or just feeling a little woozy. Poetry may be any or all or none of those things. In the end, however, such arguments are interesting only to (some) poets, and to paraphrase Emerson, you can't see a field when you're standing in the middle of it. Instead, this book will focus on the relationship that exists — right now, not fifty years ago — between contemporary poetry and general readers, as well as the kind of experiences that such readers can expect from modern writing, if they're given a chance to relate to what they're looking at.

And there's the difficulty. A smart, educated person who likes Charlie Kaufman's movies and tolerates Thomas Pynchon's novels, who works in a job that involves phrases like "amortized debentures" or "easement by estoppel" or "nomological necessity" — that person is often not so much annoyed by poetry as confounded by it. Such a reader doesn't look at a contemporary poem and confidently declare, "I don't like this"; he thinks, "I have no idea what this is... maybe I don't like it?" In fact, if more people actively disliked poetry, the news would be much better for poets: When we dislike something, we've at least acknowledged a basis for judgment and an interest in the outcome. What poets have faced for almost half a century, though, is a chasm between their art and the broader culture that's nearly as profound as the divide between land and sea, or sea and air. This is what Randall Jarrell had in mind when he said that "if we were in the habit of reading poets their obscurity would not matter; and, once we are out of the habit, their clarity does not help." The sweetest songs of the dolphins are lost on the gannets.

Nor is that disconnect reduced much by the two primary ways in which contemporary poetry is discussed on the shelves of your local bookstore or library. You might call these approaches the Scholarly Model and the How-to Model. A book written according to the Scholarly Model is exactly what it sounds like — an academic treatise intended to add glitter to a young professor's résumé — and its typical structure runs as follows:

1. Introduction; in which the author makes a general statement about the poetry world, often including some kind of on-the-one-hand-on-the-other discussion of formalism and the avant-garde, neither of which will mean much to anyone without a subscription to Poetry magazine;

2. Middle section consisting of three or four chapters devoted to individual poets, one of whom will be John Ashbery; and

3. Conclusion; in which the author argues for more narrative, or more personal detail, or more attention to language itself, or more poets whose names are palindromes, or more poems involving otters, etc.

Books written according to this formula can be hugely enjoyable and smart, but they don't have much to say to the general reader. Even a modern classic like Robert Pinsky's The Situation of Poetry is addressing a state of affairs in which its intended audience is already thoroughly situated.

Ironically enough, the How-to books can be even less helpful. These are the volumes with titles like How to Embrace Poetry or Writing Your First Poem or Opening Your Heart to Verse or something equally reminiscent of a do-it-yourself guide to window treatments crossed with a Hallmark card. The problem here is not that such books are written in bad faith or contain inaccurate information; on the contrary, they're among the best intentioned items to be found in a Barnes & Noble, and their documentation of sonnets, sestinas, and iambic trimeter is usually impeccable. The problem is that many good readers don't understand, as a basic matter, how to respond to the art form. As a result, the How-to Model's combination of technical information and platitudes can resemble a golf lesson that consists solely of being told what a nine iron is and how crisp the air can be at St Andrews on a fine September morning, without a single remark about how one actually goes about playing golf. Or to put it another way, the poetry world has been very successful at discussing instruments, classifications, histories, and theories; it's been less successful at conveying what it really means to read poetry, and by extension, why such reading might be as worthwhile as watching the director's cut of Blade Runner. 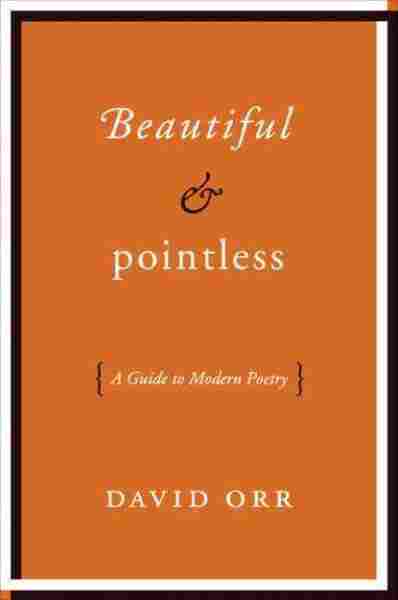 A Guide to Modern Poetry