Accessibility links
How The Beatnik Riot Helped Kick Off The '60s Fifty years ago on Saturday, several hundred musicians and their friends gathered in New York's Washington Square Park to sing folk songs and hang out, just like they did most Sundays. But on this day, the New York Police Department tried to kick them out. That day became known as the Beatnik Riot.

Listen
How The Beatnik Riot Helped Kick Off The '60s 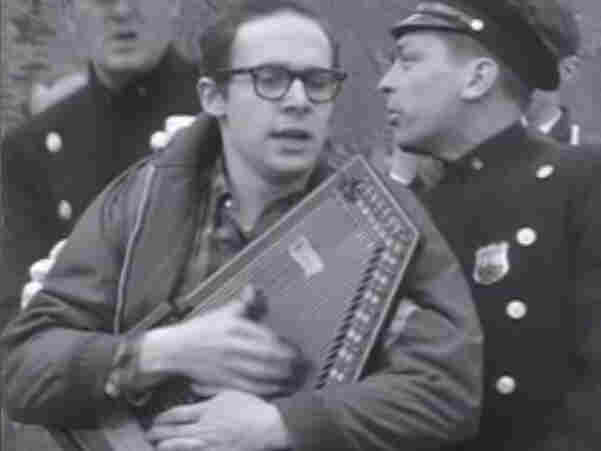 Dan Drasin's 1961 film, Sunday, captured the April 9, 1961, conflict between New York City folk musicians and police that came to be known as the Beatnik Riot. Via Dan Drasin hide caption 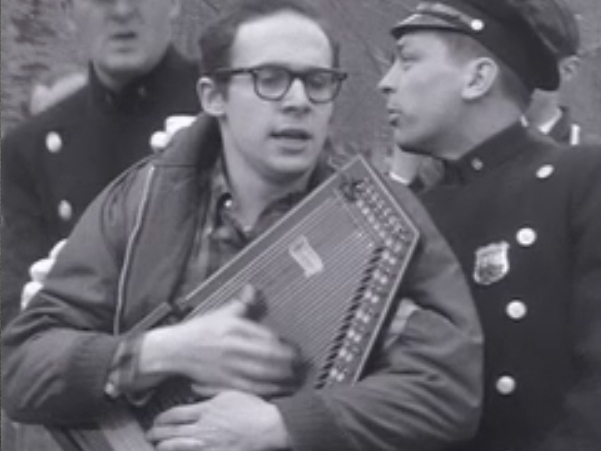 Dan Drasin's 1961 film, Sunday, captured the April 9, 1961, conflict between New York City folk musicians and police that came to be known as the Beatnik Riot.

On April 9, 1961, several hundred musicians and their friends gathered in New York's Washington Square Park to sing folk songs and hang out, just like they did most Sundays. But on this day, the New York Police Department came to kick them out.

The events of that day became known as the Beatnik Riot, and Saturday marks its 50th anniversary.

'A Nice Little Subject For A Documentary'

Folk musicians like David Bennett Cohen had been gathering in Washington Square Park since the 1940s. Today, Cohen is pushing 70, but as he stands in the shadow of the Washington Arch, he remembers bringing his guitar to Greenwich Village for the first time when he was barely a teenager.

"One Sunday, I took my guitar," Cohen says of his first visit to the park. "[I] didn't know anybody. Somebody came up to me and said, 'Oh, you play that? What do you got?' I made a bunch of friends. It was an amazing place."

Today, anybody can play music in Washington Square Park. But back then, city law required that you have a permit. That was really just a formality — until the spring of 1961 when the New York City Department of Parks and Recreation Commissioner Newbold Morris rejected the folkies' application with no explanation.

But that didn't stop Cohen and a few hundred of his new friends from showing up to protest the denial.

"We came anyway," Cohen says. "We never expected to get beat up, or arrested. I mean, how stupid can you be?"

"I'd heard about this upcoming demonstration and thought, 'Well, it would make a nice little subject for a documentary,'" Drasin says. 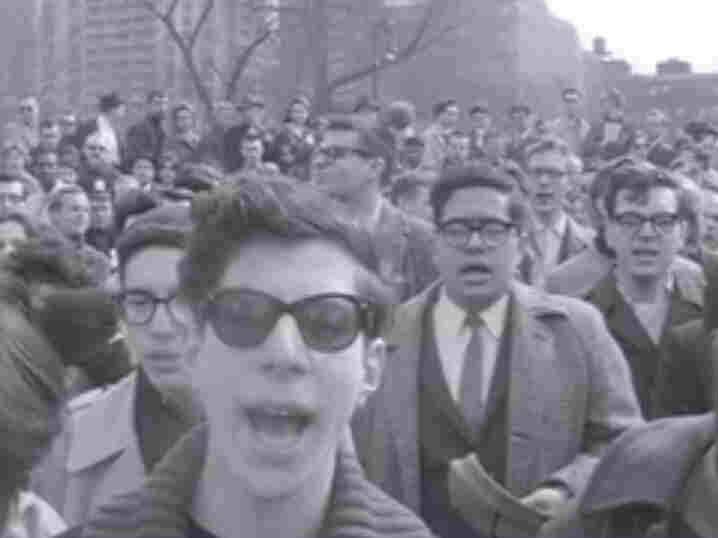 Protesting crowds at Washington Square Park sang "The Star-Spangled Banner" in an attempt to calm police during the Beatnik Riot. Via Dan Drasin hide caption 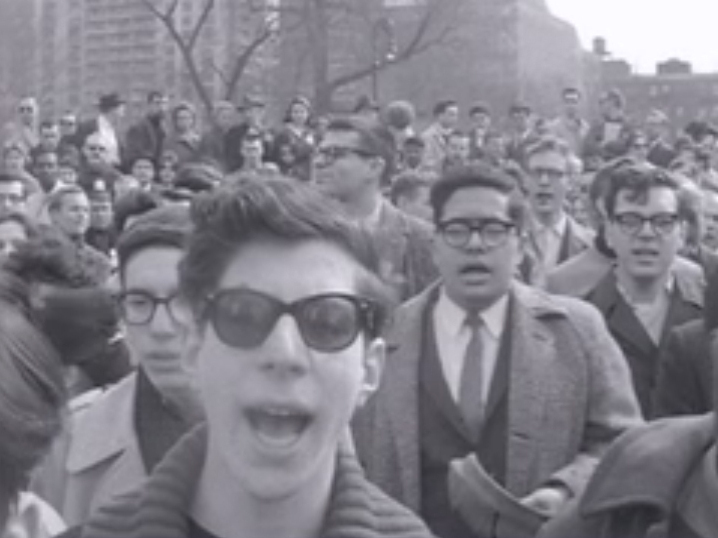 Protesting crowds at Washington Square Park sang "The Star-Spangled Banner" in an attempt to calm police during the Beatnik Riot.

Fighting For The 'Right To Sing'

In 1961, Izzy Young was running the Folklore Center on MacDougal Street, a few blocks away from the park. At the time, it was the heart of the Greenwich Village folk scene — a hangout for amateurs and professionals, including Bob Dylan and Dave Van Ronk.

Young was the one who applied for the Washington Square Park permit in the first place, and when it was rejected he helped organize the protest.

"It wasn't run by any political party," Young says. "It was run by the idea I ... and others [had] that people had a right to sing. So it's a peaceful demonstration asking for our rights."

"We go to the park," Young recalls. "There's about seven or eight paddy wagons waiting for us and there [are] two or three cops on horses."

Drasin's film shows Young trying to reason with the police, telling them, "It's not up to Commissioner Morris to tell the people what kind of music is good or bad. He's telling people folk music brings degenerates, but it's not so."

When the cops didn't budge, Young tried to make his point with music.

"I have everybody singing 'The Star-Spangled Banner,'" Young says. "I said, 'They can't hit us on the head while we're doing that.'"

But the cops still weren't persuaded. They arrested a handful of protesters, and pushed and shoved dozens more.

It's all captured in Drasin's 17-minute film, Sunday. Drasin says even the cops didn't seem to know why they were trying to kick the musicians out of the park.

"Ultimately, we never found out," Drasin says. "Some people suspected that local real estate interests were involved, wanting to rid the park of beatniks and so on — undesirables, as some of them called them. But we never actually found out."

The event itself got plenty of newspaper coverage, with one headline proclaiming "3,000 Beatniks Riot in Village." But the hysteria faded quickly.

Today, Young lives in Sweden. He says the Beatnik Riot is pretty much forgotten, except for Drasin's film and Young's collection of photographs and newspapers clippings.

But Drasin disagrees. He says the events of April 9, 1961, did have a lasting significance.

"It was a chaotic day, without a whole lot of rhyme and reason," he says. "But it was certainly representative of the era to come, when the people confronted established authority and started holding them accountable. It would've been unthinkable in the 1950s. But this was the beginning of the 1960s."

The folkies did ultimately get their permit to play in Washington Square Park. Cohen — who went on to play keyboard for the band Country Joe and the Fish — says if the police wanted to discourage musicians from gathering in the park on Sundays, the plan backfired.

After all, it's hard to visit Washington Square Park today and not run into a musician; they don't actually need permits anymore.

"Except for that one little glitch with the cops, there was never really any interruption," Cohen recalls. "If I remember correctly, it came back even stronger."