Accessibility links
Egyptian Mummies Diagnosed With Clogged Arteries The startling findings of atherosclerosis in ancient Egyptian mummies means scientists may not understand heart disease as well as they think they do. 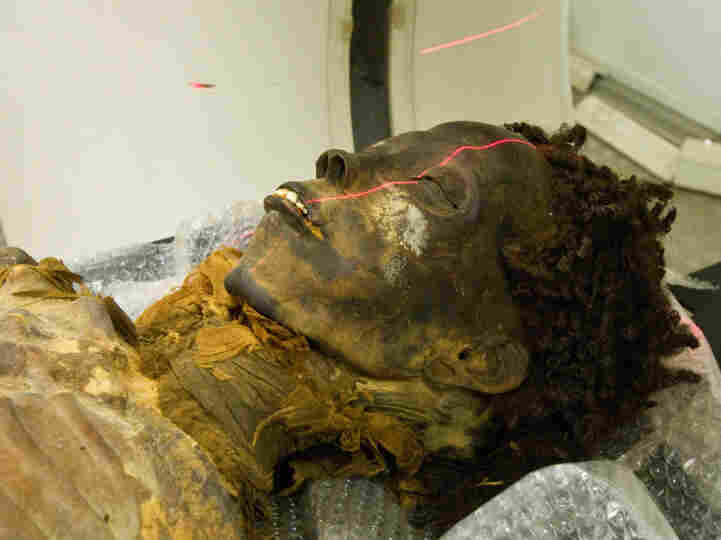 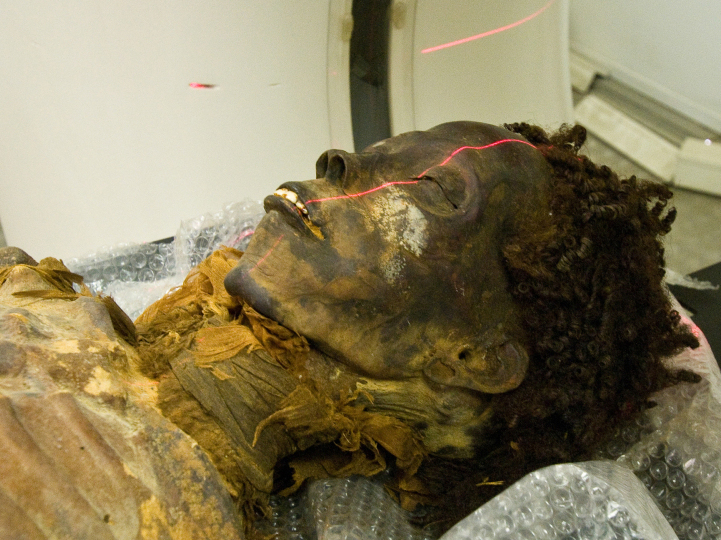 The mummy Maiherpri undergoes CT scanning. Study results call into question the perception of atherosclerosis as a modern disease.

Heart disease is supposedly a modern affliction, the result of a diet rich in animal fat and too many hours spent on the sofa. But recent discoveries suggest that strokes and heart attacks may have been bedeviling humans for millenia.

Dr. Greg Thomas is part of a team of scientists that recently discovered the earliest known case of atherosclerosis — clogged arteries — in ancient Egyptian mummies. The startling findings mean scientists may not understand heart disease as well as they think they do.

Thomas tells Weekend All Things Considered host Linda Wertheimer that his team began by running mummies through a CT scanner.

"Our hypothesis was that they wouldn't have [heart disease], because they were active, their diet was much different, they didn't have tobacco," he says.

But they were wrong.

One of the mummies the team scanned was a princess in her 40s, who presumably ate fresh food and wasn't sedentary. "That she would have atherosclerosis," Thomas says, "I think we're missing a risk factor. Right now we know that high blood pressure, smoking, cholesterol, inactivity and other things cause athersosclerosis, but I think that we're less complete than we think."

Ancient Egyptians did have access to meat, though Thomas says their diet consisted mostly of grains, fruits and vegetables.

The subjects the team studied belonged to an elite class; working people didn't merit mummification. Thomas says the legendary inbreeding of Egypt's royal families probably had little to do with the incidence of heart disease, however.

"We found the atherosclerosis over 2,000 years of time, and so there would be many different families who were the pharaohs or the ruling parties at the time ... We think it's common to the environment there, among the elite."

Thomas says his team hopes to find some less-exalted mummies to scan. "But we're suspicious that even the more middle-class persons, that they may well have had [heart disease]. But that's research to be done."