Accessibility links
Tuskegee Airmen: 'Rock Stars' Of American History The number of living World War II veterans shrinks every week, and every time it does, another part of American history fades away. Last month, a distinguished group of black veterans — the nation's first black fighter pilots — reunited to drink a little, laugh a lot and swap war stories.

Harry Stewart looks around the slowly filling ballroom in an Orlando, Fla., hotel and brightens.

"I haven't seen some of these guys in over 66 years," he says. "Some I haven't seen since I entered the service, and others since I left at the end of the war. This is very exciting."

Red Tail pilot Alexander Jefferson was shot down by the Germans in 1944 and was held as a prisoner of war. Before his trip home, he took a horrifying, last-minute side trip.

The war Stewart is referring to is World War II, when the Army was still segregated. Stewart is part of a reunion of Red Tail pilots, members of the 332nd Fighter Group. They're part of the Tuskegee Airmen, an organization composed of World War II fliers and the thousands of people on the ground who made their missions possible.

The event's organizer, Leo Gray, says he realized earlier this year that time was zipping by. One of their members, Lee Archer, considered by some to be the country's only World War II black ace pilot (his plane was emblazoned with five swastikas, one for each German plane downed), died last year.

Gray wanted to bring the remaining pilots together again. "Nothing official," he explained. "I wanted this to be social, to give the guys plenty of time to spend with each other, because you never know what's going to happen, or when somebody's going to go next."

It's a pretty safe guess that "next" may not be too far off: The youngest Red Tail pilot is 86, the oldest 96. Many are infirm and unable to travel. Others could only come with the assistance of younger family members. But about a dozen ended up drinking a little, laughing a lot and sharing war stories.

Tales Of The Red Tails

Alexander Jefferson, a small, trim man with a silver mustache, told of being shot down on Aug. 12, 1944. He was strafing German radar stations when his plane was hit. He lost consciousness after the crash, and awakened to a German pointing a gun at him and shouting, "Naeger! Naeger!"

"I thought, 'Oh, crap — even in Germany!' " Jefferson laughed, shaking his head. "But it turned out he wasn't saying the other word — that was their word for negro."

In fact, the German soldier's commanding officer saluted Jefferson when he took the pilot into custody. "I was treated like an officer the whole time I spent in POW camp," Jefferson said.

Jefferson was poring over photos with Hiram Mann, an ebullient octogenarian whose impish personality earned him the nickname "Gremlin."

Mann said that when he entered the service, he was "a little older than some of the other guys."

He was reporting back to base to fly an important mission when he was grounded by the base flight surgeon, who thought Mann and his buddies hadn't spent enough downtime before their next flight.

Mann's plane, Boss Lady (his affectionate nickname for his wife), was assigned to another pilot — who didn't make it back. "I often think about it," Mann said. "And I think, 'There but for the grace of God go I.' But he could have been in a different space than I would have been, I don't know."

The date for the gathering, March 24, was chosen to coincide with the 66th anniversary of the Mission to Berlin, the longest nonstop mission in the European theater. The Red Tails took off from their base at Ramitelli, Italy, and accompanied a group of bombers to Berlin, where they destroyed the Daimler Benz tank assembly plant. They returned covered in glory and citations — until they got back to the States.

"Coming back on the boat," Jefferson recalled, "got to New York Harbor, the flags waving, the Statue of Liberty. Walked down the gangplank, and a little soldier at the bottom said, 'Whites to the right, niggers to the left.' "

The Tuskegee Airmen, and especially the Red Tails, would be held up as examples of excellence in the black community for decades.

Robert Martin likes to say he flew 63 1/2 missions during the war. What would have been his 64th ended when he was shot down over then-Yugoslavia.

Coming back on the boat, got to New York Harbor, the flags waving, the Statue of Liberty. Walked down the gangplank, and a little soldier at the bottom said, 'Whites to the right, niggers to the left.'

His daughter Noelle said that growing up, she sometimes had to sit on herself to not brag about her father. "I always wanted to say: There's my dad, and he's a Tuskegee Airman," she said.

Leo Gray's daughter, Kathy Bryant, said she'd think about her father when she was being racially harassed in her workplace and say to herself, "What he did was harder. If he can do it, you can do it."

But they were off much of America's radar screen. Say "war hero," and the visual that came to mind was automatically white. Many of the airmen became involved in the country's civil rights movement, fighting what historians now call a second front.

"We fought fascism and Nazism, and won," said one of the airmen firmly. "Then we had to come home and fight racism. And we were going to win that, too."

They did. The Red Tails' stellar war records demolished the canard that blacks weren't intelligent or coordinated enough to operate airplanes. It forever erased doubts about black pilots' patriotism and bravery. And, said Col. George Hardy, when the Air Force became a separate branch of service after the war, "a lot of officers that had been in the Army Air Force were now in important positions in the Air Force, and they remembered what they'd seen."

The Air Force commissioned a study on integrating the branch in November 1947, and in April 1948, the Air Force announced it would integrate — this was before President Harry Truman signed Executive Order 9981, desegregating the armed forces. 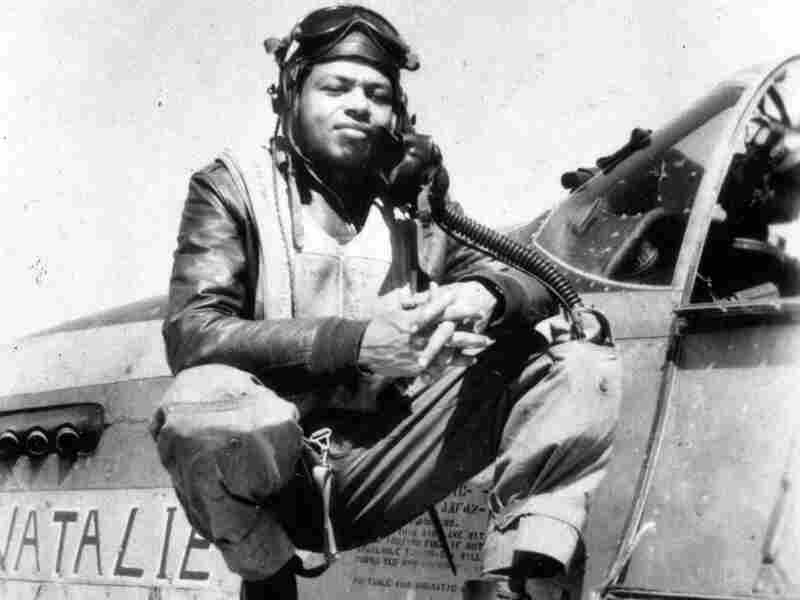 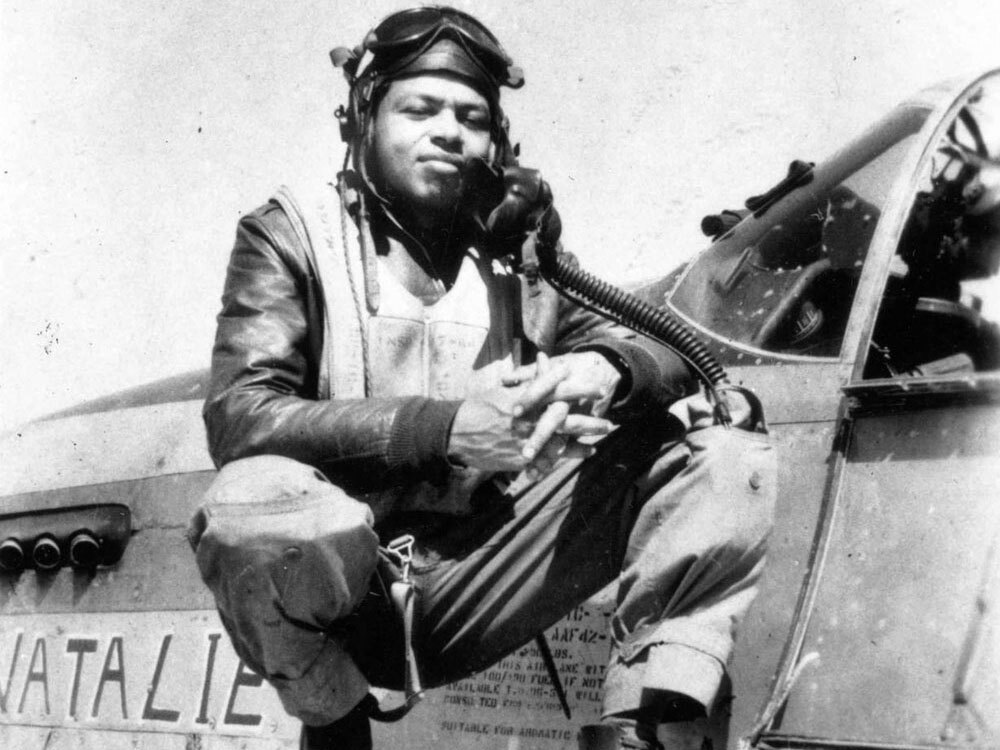 It was no small feat. And eventually, the Red Tails received accolades from beyond the black community: In 2007, President George W. Bush (the son of George H.W. Bush, a World War II fighter pilot) presented them with the Congressional Gold Medal in the Capitol Rotunda.

At the conclusion of his welcome, Bush told the airmen that he'd like to offer a gesture, a symbol "to help atone for all the unreturned salutes and unforgivable indignities" they had endured over the years. "So on behalf of the office I hold and a country that honors you, I salute you," he said. They saluted back.

Their heightened profile has made them rock stars. At their hotel, the Red Tails couldn't finish meals without being interrupted and asked to sign autographs. Eager parents pushed shy children toward them, asking if they'd take a picture.

"You don't get this now," one mother told her reluctant 4-year-old, "but you'll be glad you have this later on. This is history, honey."

Navy men and women meeting in the Red Tails' hotel asked if they'd speak to their group and take a few photos. The lines went through the lobby as men and women in uniform — and several retired military — waited patiently to have their picture taken with the pilots.

Looking on, Capt. Art Pruitt smiled. "It's funny, we were just watching everybody taking pictures of them — it's like the paparazzi: These guys are rock stars. And to be able to honor them this way, it's just an honor and a privilege."