Accessibility links
China Cracks Down On Christians At Outdoor Service Dozens of Chinese Christians have been detained after they worshiped outdoors. The action comes just days after the U.S. expressed concerns at a growing crackdown across China. Beijing has shrugged off the accusation, saying the U.S. is using human rights as a political instrument to defame other nations.

Listen
China Cracks Down On Christians At Outdoor Service 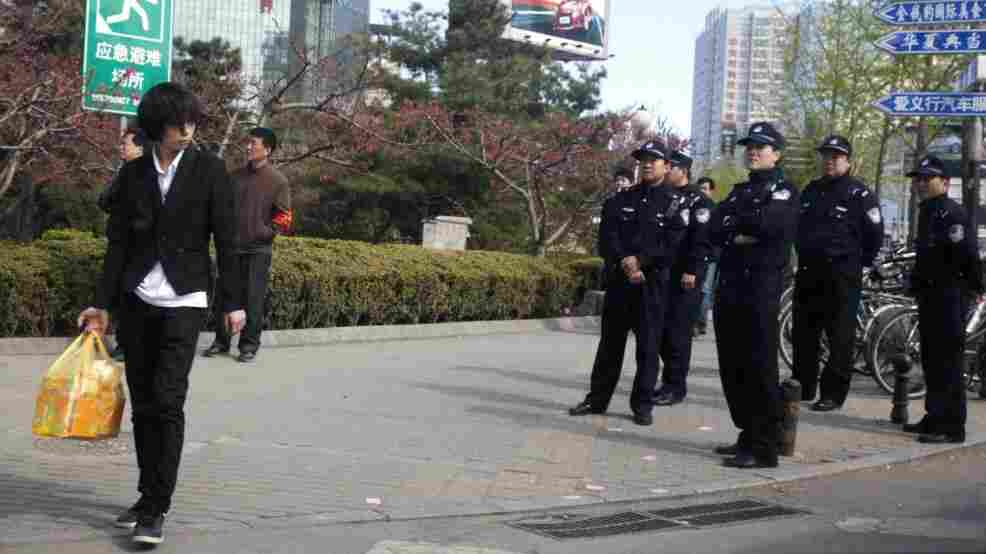 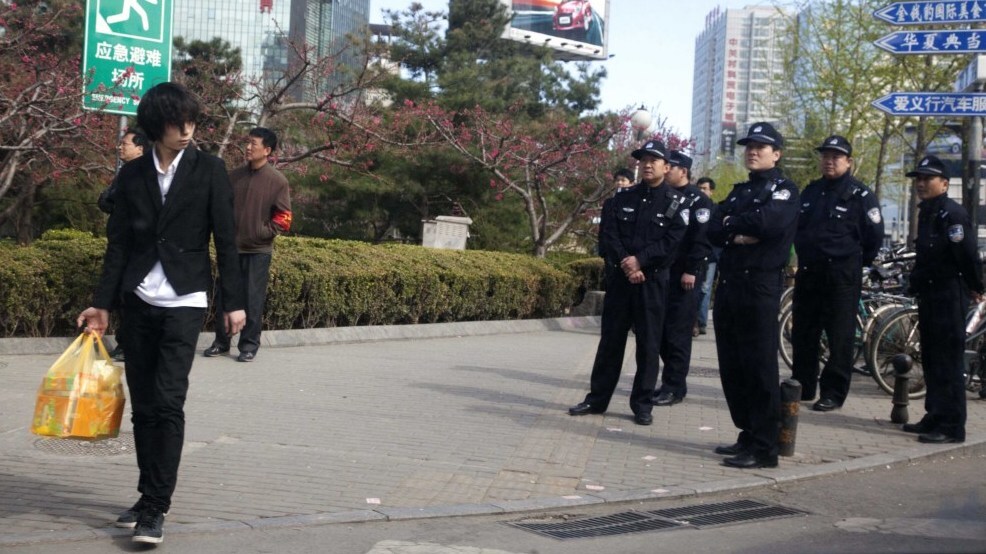 Chinese police officers watch an area near a building that leaders of the unregistered Shouwang house church had told parishioners to gather in Beijing, China, Sunday, April 10, 2011.

More than 100 Chinese Christians have been detained after they worshiped outdoors. One Chinese state-run newspaper called the meeting "illegal" and a "public disturbance," and accused Christians of trying to politicize religion.

This comes just days after the U.S. expressed serious concerns at a growing crackdown across China. Beijing has defended itself, saying the U.S. is using human rights as a political instrument to defame other nations.

This confrontation had been brewing for weeks. With a congregation of about 1,000 people, Shouwang church is one of Beijing's biggest unregistered or "house" churches. It had been allowed to operate, but the church has been unable to find a space to meet, a fact they blame on government pressure.

In desperation, church elders announced they would meet outdoors. But as the day dawned, elders were forbidden from leaving their homes. The chosen meeting place, a pedestrian walkway in northeast Beijing's Haidian district, had been sealed off and surrounded by police officers.

Christians from Shouwang, many of them younger and well-educated, were at the site, and split into smaller groups to find places to worship, following instructions given to them by their elders. About twenty people walked to a nearby park, where they began their service.

They sang of "painful, dark despair", and how faith had given them hope. Hearing the hymns, more worshippers kept arriving, most with news of people being taken away by the police. One young man, who asked that his name not be used for his own safety, came with news that five friends had been detained.

As the worshippers prayed, a policeman appeared in the distance, speaking into his walkie-talkie. I asked the young man whether it would be worth it getting arrested for this, "As long as they don't hang any other labels on me," he replied. "If they say I was detained for my faith, it would be worth it. But if they say there are other political factors, that would be far from the truth."

They've been more visible in the past few months, as China moves to ensure online calls for an Arab-style "Jasmine revolution" do not bear fruit. On this day, the worshippers prayed on, their eyes shutting out the world, their voices never wavering.

The young man spoke up in prayer. "Our brothers and sisters have been detained," he said, but he went on to thank God for this place to worship. All the while, the net of security was slowly closing in. As the service ended, the inevitable happened.

"Go! Go! Go!" shouted the police, herding the worshippers into a bus. Church leaders had told them not to resist arrest. "Let them take us away, just like a lamb to the slaughter" were the words used in a letter to the congregation.

My presence was causing a stir. Plainclothes security demanded identification. I told them I was a journalist for a U.S. news organization. As they manhandled me, I threatened to call the U.S. embassy.

"You think I'm scared of the U.S. embassy?" One agent spat out. "They can't control me." These were the words of one plainclothes thug, yet they seemed almost symbolic in the week that China shrugged off the U.S. human rights report.

"The gloves are off," says Sam Zarifi, Amnesty International's Asia-Pacific Director. "There's no question that the Chinese authorities are sending all signals to their own citizens — and overtly to the U.S. and the outside world — that they simply will not tolerate any group that is not just critical, but does not directly obey the Chinese communist party's control."

According to the U.S.-based China Aid group, 169 worshippers from Shouwang were detained. It says they were interrogated, and some asked to sign documents promising not to worship outdoors again. It's not clear if all have been released, as those that refused to sign were reportedly kept in custody.

The official attitude is laid out in an editorial in Monday's Global times newspaper. "No matter the rationale, the public gathering of this group [was] inappropriate," it says. "With the many passers-by around, it had become a public disturbance." The editorial also refers to unregistered "house churches" as illegal, but says the government has adopted a tolerant attitude towards them. It blames overseas Christians for hoping "to bring Chinese Christians beyond Chinese law, and so attempt to twist Chinese society by politicizing religion."

China Aid says it's hearing increasing reports of unregistered, or "house," churches being forced from their premises after government pressure. It cites two churches in the southern city of Guangzhou, the Liangren and Tianyun house churches. Two prominent human rights lawyers, Tang Jingling and Liu Shihui, worship at the latter, both of whom have been detained by the authorities.

Watching the attempts of the Shouwang church to worship in Haidian, I was detained briefly, as were two other foreign journalists. This is just one small scene in the Chinese government's struggle to reassert its control. The willingness to send in the police against praying Christians once again underlines Beijing's obsession with stability – and that it no longer seems to care what the outside world thinks.