Accessibility links
The Library Card As A Pop-Culture Fiend's Ticket To Geek Paradise We've talked many times about all the different ways you can interact with the things you love, but we've never really talked about using a public library as a point of contact with pop culture. It's time to investigate. 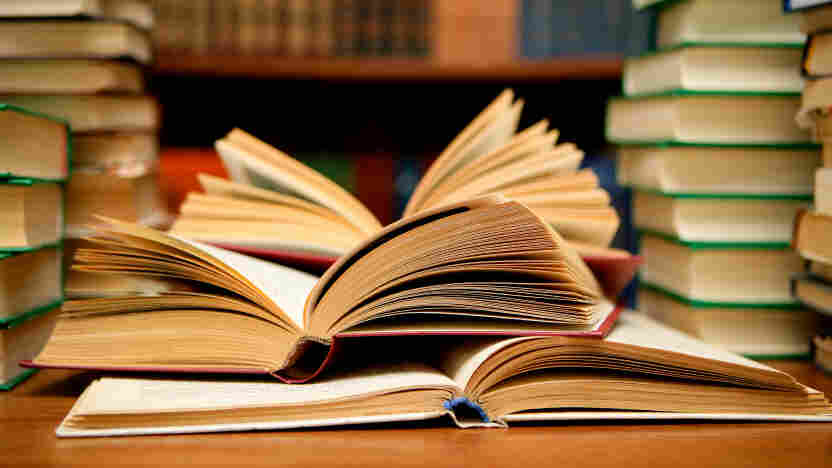 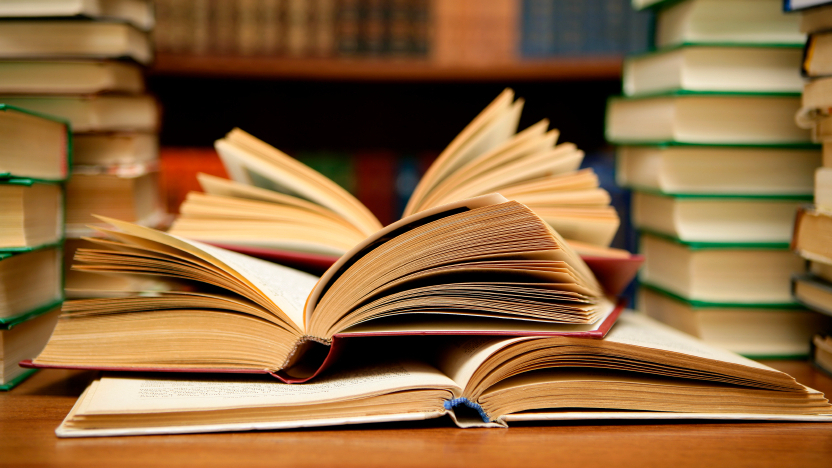 There's a big public library literally across the street from my bank and the supermarket where I most frequently pick up stuff like milk and paper towels. Across the street. As in: first I buy Diet Coke, then I dodge one SUV careening around the corner, and I'm there.

And yet, until this weekend, I'd never been in it and I had no library card.

I've talked a bunch of times about the economics of e-book purchasing and paper book purchasing, about my love of paperback romance novels, and about how unattached I am to book ownership and the growth of my personal library, and somehow, I never crossed the street.

After finally heading over to get signed up and then leaving on Saturday with the odd sense I tweeted about that they had let me walk out with six books and three DVDs for nothing and I felt like I'd committed a heist, I gave this some thought. Why, when there's such bitter frustration over pricing of all the things people actually buy, is library borrowing often only faintly heard about in noisy, angry discussions you can so often hear about "How do I stop getting broken on the rack by publishers of various kinds?" What kinds of hesitations stop this from happening?

(Note: I know that for some of you, you've always been library hounds; I salute you. Don't feel marginalized. I'm speaking of those — whose numbers are strangely large — who, like me, just kinda ... stopped thinking about public libraries at some point.)

Do they have what I want? Obviously, one of the issues is always going to be selection. I think when I envision libraries, I think about ... encyclopedias? Children's books? History? It's not that I don't know that they have new books and popular fiction, though you often don't see that stuff on display because it's out with lengthy waiting lists. But somehow, I don't think of the library as possessing the same books I buy for myself. I see it the way I saw it when I was a kid. I see it the way I saw it when I assumed that all books that didn't have pictures in them were dry and important. I have always associated the library with school and homework and (the horror) being quiet, not necessarily with fun.

But on Saturday, I grabbed David Foster Wallace's Infinite Jest, which I checked out because (1) I've never read it; (2) I may not talk myself into it or be able to finish it and I definitely don't want it in my house staring judgmentally at me if I don't; (3) I want to give it a try; and (4) it wouldn't work as a Kindle book anyway because of the footnotes. Taking it out of the library is basically the only model under which I'm likely to try that particular book.

I also found the last three books in a highly frivolous Nora Roberts romance series (oh, settle down) from which I'd already read the first. They'd cost $12.99 each if I bought them electronically. That's forty bucks to read three more books that are ... all very much the same book as the first book, but I kind of wanted to read them, because ... whatever, it was the weekend. It's relaxing. It's a series. Don't judge.

Anyway, borrowing them long enough to read them (which takes, in total, maybe twelve hours for all three) cost me ... nothing out of pocket.

So let's review: E-book pricing versus paperback pricing versus zero dollars (beyond what I pay in taxes to support the library, which I'm paying anyway) — for the rest of the set. It was not a very difficult question.

I also picked up the Tom Shales history of Saturday Night Live, which I'm pretty sure I've read, or at least looked over, but there it was, and why not? I also love the gigantic tomes about etiquette that Judith Martin (that's Miss Manners to you) writes — she's hilarious and smart — and they had one of those, so I picked it up. That's six books that I genuinely wanted to read, at least three of which I probably would have blown money buying and then felt bad about.

What condition is the stuff in? The same romance about physical books that leads some people to inhale of the pages as if they're breathing in knowledge itself leads some of those same people not to like books that are beat-up. And make no mistake: In my public library, I found many beat-up books.

In particular, I found that all those cheap romance paperbacks were beaten, mangled, shaken and stirred. Not so that you couldn't read them, but just so you knew they'd been read a lot. Oddly, I found this ... comforting. I picked up some of those horribly abused books and felt like I was putting my hands on tangible populism. Those books are there because they're read, and it actually made kind of a good reminder that the library was trying to help, that the idea was to serve readers. Whether you like genre fiction or not, the people who read it read books and support libraries and bookstores, and the proof is right there in all those spines that are half-unreadable because they're creased in so many places.

(Oh, and one other thing: If you read romance novels from the library, you will learn that while you might not fold down the pages to mark the ... well, the more risque sections, some people do. I found this, again, delightful. You naughty people who live in my county.)

In short, you are indeed dealing with shared books, and they feel like shared books. It's not the same feeling as owning a book yourself and filling it exclusively with your own marginalia and placing your bookplate in it, but it has its own charms.

What do I do if the selection doesn't turn out to be so great locally? Consider for a moment our new I Will If You Will Book Club selection, Neil Gaiman's The Sandman: Dream Country, which we'll get started on this week. As it happens, when I look it up in the online catalog, there are no copies at my branch. (Four copies across my library system are checked out; I dearly hope they are all to IWIYW readers.) But there are other copies at other branches, and right from my desk, I can ask my branch to get me one, and I can pick it up there. In other words "Dear Building Near Me: I want to read this book, and they have it at Building Not Near Me. Could you ask them to send it over, and then I'll pick it up on this particular day? Sincerely, Lazy N. Frugal." To which my library will say, electronically, "Dear Lazy: No problem! We look forward to seeing you."

So in other words, depending on your system, there's an excellent chance that the selection is bigger than you think it is.

Do I have to run back and forth all the time? The lending period at my library, for most stuff, is three weeks. And most things can be renewed online, up to a point. I mean ... they're trying to make it easy on you, they really are.

Were you embarrassed when they saw you checking out romance novels? If it's been a while since you visited your library, you may be surprised to learn that many of them have automatic checkout with scanners, just like at the grocery store, so you don't have to show your books to anyone if you don't want to. Nora Roberts was my little secret. Well, not so much now, but you know.

Do they have anything for me if I'm not so much a reader? I know you probably know that your library has DVDs. But somehow, in my mind, I envisioned a measly little table, like at a garage sale in the late '90s, with a few scattered, beat-up DVDs on it, all of which would be selected from the great list of ... things I don't care about.

To my surprise, they have a nice fat shelf of movies. I was recently reading Wil Wheaton's beautiful piece about reuniting with the cast of Stand By Me and remembering River Phoenix, so when I saw Stand By Me on the shelf, I took that. I then realized that the documentaries (I love documentaries) were shelved with the books (weird, but understandable), so I went into the stacks again. There, I found Ken Burns' Baseball and — oh, joy — the fantastic King Of Kong: A Fistful Of Quarters, a movie that I recently discovered, to my dismay, is not streaming on Netflix anymore, and which I hadn't seen in a couple of years.

So there you have it: three movies and six books, all very much from the universe of stuff we talk about here on the blog anyway. No research papers, no homework, no garage-sale cast-offs. I was really surprised, at some level, when the detectors at the door didn't go off, even though I intellectually knew they wouldn't.

What say you to e-readers and audiobook lovers? I'm glad you asked.

I may have misspoken when I said on Saturday that my library had e-books I could read on my phone. It's not clear to me yet (watch the drama unfold in the comments!) whether I can actually do that. BUT! Some other readers can read them, and I can read on a PC, which isn't as bad a way to read as I used to think it was. (This is actually how I first discovered e-books, was reading on my PC before I owned a Kindle.) The e-book situation with libraries is in flux, you could say, as Lynn Neary recently reported. But it's not because your local library isn't trying.

As for audiobooks, my library has those, too, and as with e-books, you can download them from your computer without even going to the library. You could actually be a thriving, happy library user without ever setting foot in my particular public library. The library is hermit-friendly!

Is that it? It's ... not remotely. They had magazines, they did have encyclopedias and research materials, obviously, and basically, if you have a small child, they will do everything short of holding your kid by his feet and dipping him in fonts of wisdom. There's story time, there are tutoring rooms (which were in use when I was there), there's a book club (they're reading As I Lay Dying at the moment), and OH RIGHT, it's staffed with people who clearly would really like it if you came up and asked them questions about books or anything else.

The point I'm trying to make is that as a pop-culture-adjacent person, you may think that public libraries are not particularly relevant to you. But I felt like since we've talked about movie pricing, e-book pricing, and a lot of other business models, it was only fair to bring to your attention my experience with this bizarre business model that's so crazy it just might work.

[Note: It is a complete coincidence, you have my word, that I just figured out it's National Library Week. My finger purely accidentally landed on the pulse of library news.]