Accessibility links
Former D.C. Schools Chief May Have To Answer For Suspect Scores Former D.C. Public Schools Chancellor Michelle Rhee based much of her success on dramatic gains in kids' test scores. So when a USA Today investigation called D.C. test scores into question, it also put Rhee's reputation on the line.

Listen
In D.C., Michelle Rhee May Answer For Suspect Scores 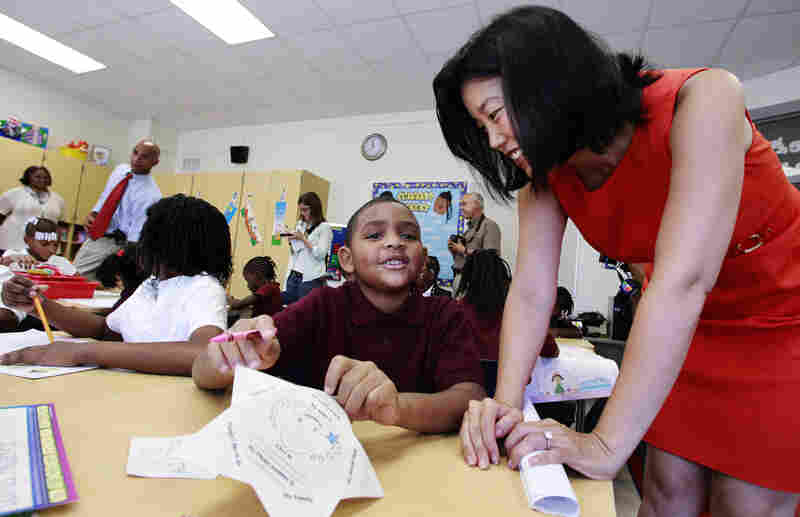 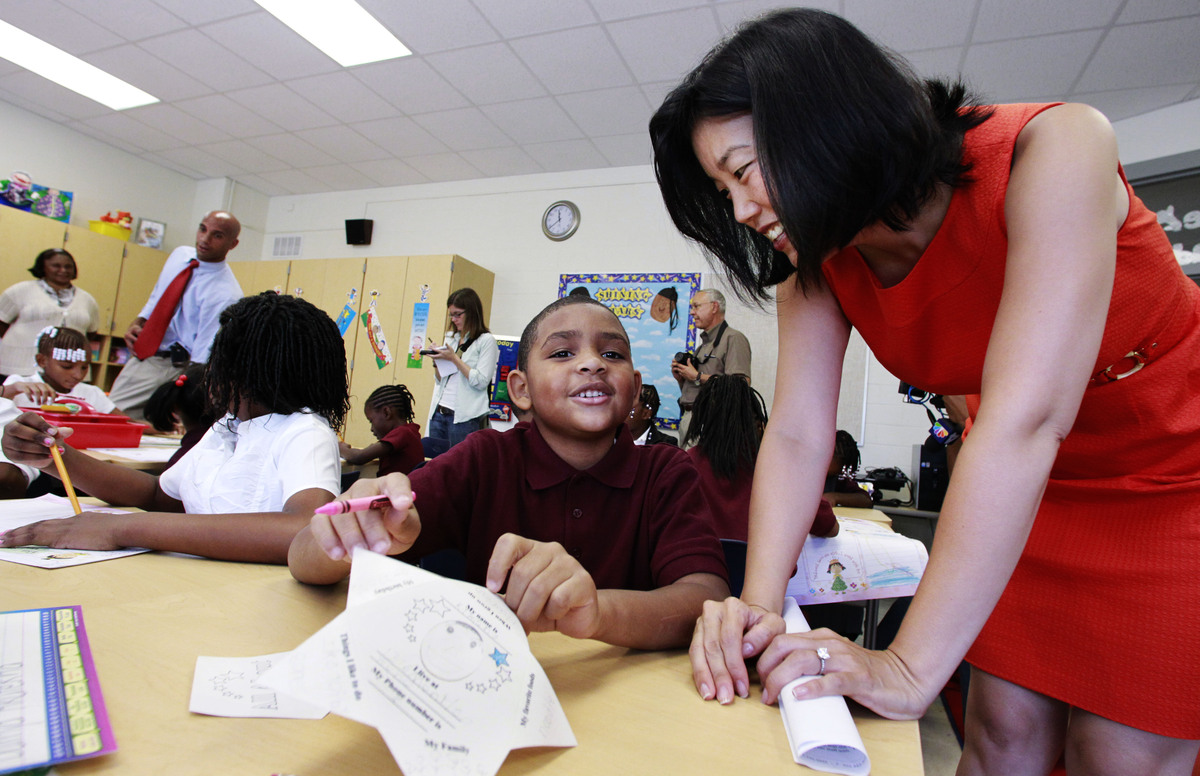 Michelle Rhee served as the head of D.C. Public Schools for almost three years. She now heads her own education advocacy group, StudentsFirst.

USA Today reviewed test scores from 2008 through 2010 and found an unusual rate of erasures on answer sheets from 103 schools in which wrong answers were consistently replaced with the right ones. In one seventh-grade classroom in Northeast D.C., USA Today found nearly 13 erasures per student on a 2009 reading test. The citywide average that year was no more than one erasure per student.

If an independent investigation finds that there was, in fact, widespread cheating, it could tarnish the reputation of former D.C. Schools Chancellor Michelle Rhee, who based much of her success on dramatic gains in kids' test scores.

Taking The 'Bad Apple' Down

D.C. City Council Chairman Kwame Brown says if necessary, he wants hearings and subpoenas to find out what really happened.

"We should be scrutinizing all test scores if there's anything that has to do with people cheating," Brown says. "If there's one bad apple on the tree, we need to take the apple down."

With no conclusive evidence that someone cheated, Brown won't speculate about who that "bad apple" might be, but if there are hearings, Rhee could very well be targeted.

During her three-year tenure, Rhee was credited with the rapid rise in reading and math test scores, especially in secondary schools. She became a national hero among education reformers, and now that those test scores are suspect, so is Rhee's credibility.

Rhee fired back on the matter for the first time on PBS's Tavis Smiley Show two days after USA Today published its March 27 findings.

"When the academic achievement rates of a district like D.C. go up, people assume that it can't be ... because the kids are actually attaining higher gains in student achievement, but that it's because of something like cheating," Rhee told Smiley.

When he asked Rhee if she believed the USA Today investigation to be lacking in integrity, she said, "Absolutely."

Rick Hess of the American Enterprise Institute for Public Policy Research is a fan of Rhee's, but he laments her initial response.

"The notion that it's an attack on D.C.'s children to raise questions about test validity is an unfortunate declaration," Hess says. "I understand where she's coming from — Michelle has been subject to any number of cheap-shot attacks in the last four to five years."

Still, Hess says the USA Today investigation does point to serious problems with the security and reliability of tests in the District's public schools — problems that Rhee's critics are all too eager to believe and Rhee has been all too quick to dismiss.

More On Michelle Rhee From NPR:

"There's been a tendency to romanticize the gains that have been in D.C. and oversell them by supporters of what Rhee did," Hess says.

He says it'll be interesting to see whether anybody can prove those gains were bogus.

The District's acting schools chancellor and Rhee's protege, Kaya Henderson, declined to comment for this story, but she has since released the results of the school district's own investigation by the private consulting firm Caveon Test Security.

Caveon found no evidence that teachers or staff had tampered with the answer sheets, but it did find clear proof of erasures.

The Misuse Of Test Scores

The District isn't alone in its testing troubles. In Georgia, the state has launched a criminal probe of possible cheating by teachers who allegedly altered test answers. Some experts say schools are increasingly relying on tests not just to gauge students' performance but to decide whether teachers should get paid more or even keep their jobs.

"Yet the reputation of schools and teachers hangs on how well students do on these tests, so we're creating a high-pressure situation where, unfortunately, there's going to be bad conduct because of human nature," Jennings says.

As for Rhee, on April 4 she told NPR affiliate WAMU that she too wants an independent investigation.

"It's better to lift the cloud and make sure that everybody is clear that the gains were real," Rhee said. "If there were problems in isolated instances, then those problems should be dealt with directly."

A full investigation by the District's inspector general is now pending.