Accessibility links
Murdoch's U.K. Tabloid Apologizes For Phone Hacking The phone-hacking scheme that targeted celebrities and politicians was centered at News International's News of the World. A rekindled criminal inquiry into the case is underscoring close ties between British authorities and Rupert Murdoch's media empire. 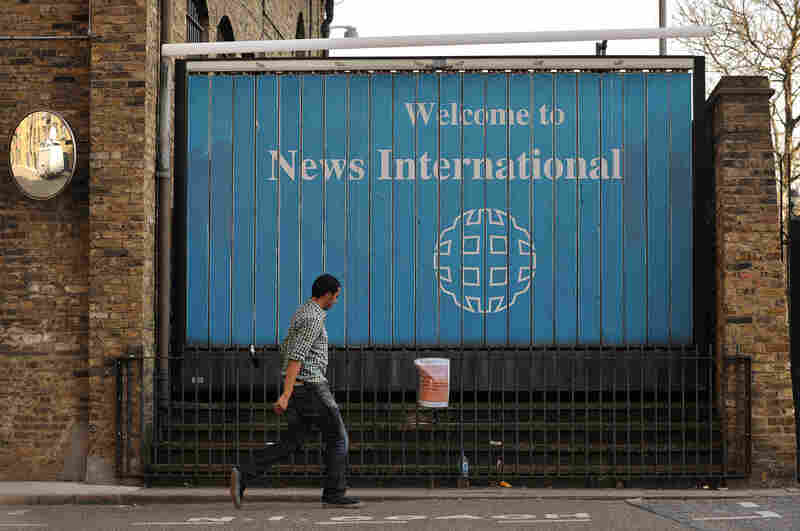 A man walks past the entrance to News International Ltd. in London on Friday. The company is apologizing to politicians and celebrities who were victims of a phone-hacking scheme at the company's tabloid News of the World. Ben Stansall/AFP/Getty Images hide caption 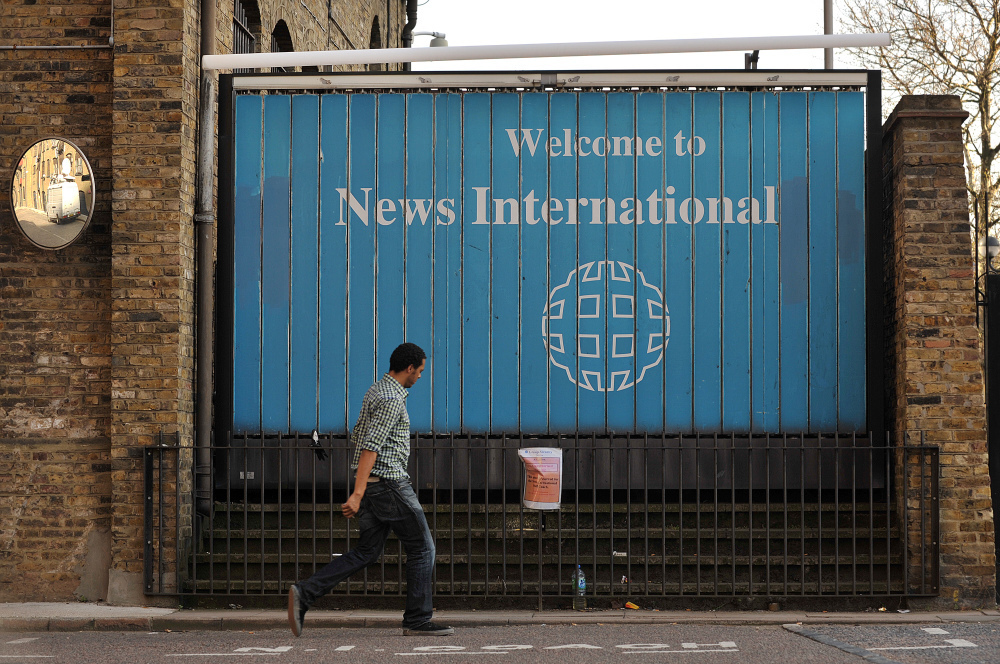 A man walks past the entrance to News International Ltd. in London on Friday. The company is apologizing to politicians and celebrities who were victims of a phone-hacking scheme at the company's tabloid News of the World.

Rupert Murdoch's News International company is apologizing to politicians and celebrities who were victims of a phone-hacking scheme centered at the News of the World, one of its most popular papers.

It is a sharp reversal for the company, which for years had argued that an episode that involved intercepting the mobile phone messages of Princes William and Harry was an isolated case involving the paper's royals reporter and a private eye. Both were prosecuted and imprisoned for the incident.

But the recent, broader apology and the promise of a compensation fund for certain victims follow the arrests earlier this month of the tabloid paper's former news editor and the current top news correspondent on similar grounds. The News of the World is the most popular Sunday paper in the U.K. and is famous there for breaking gossipy scoops about royals, celebrities and politicians.

The rekindled criminal inquiry in the case is underscoring the close ties maintained between the media empire of the paper's controlling owner, Murdoch, and the authorities.

"The whole episode illustrates the enormous power that Rupert Murdoch wields — in which politicians feel betoken to him for his support," says Guardian media critic Roy Greenslade, a former assistant editor of Murdoch's daily tabloid The Sun and a former managing editor of his tonier broadsheet paper, The Sunday Times of London.

The two most recent past Labor prime ministers, Tony Blair and Gordon Brown, aggressively courted Murdoch and won his papers' endorsements despite their historic sympathies for the rival Conservative Party.

But before winning the prime minister's job, David Cameron. a Conservative, successfully sought Murdoch's support. Cameron hired as his communications director Andrew Coulson, the former top editor of the News of the World. Coulson had resigned as editor in 2007 after the first chapter in the hacking scandal, though he said he had no knowledge of the practice during his tenure.

"During that time, I never condoned the use of phone hacking — and nor do I have any recollection of incidences where phone hacking took place," Coulson told a parliamentary panel in 2009. "My instructions to the staff were clear. We did not use subterfuge of any kind unless there was a clear public interest in doing so."

Coulson followed Cameron to No. 10 Downing Street and became his top PR aide there, as well. And Cameron's government is in the process of giving regulatory approval of Murdoch's bid to win total control of the major satellite TV company BSkyB.

But months of in-depth reports from The Guardian, Channel 4 and The New York Times took their toll, and the scandal flared anew. In January, when it became clear additional celebrities and government officials had also been hacked, Coulson was forced to resign again — this time, from his senior job in the government.

Now the scope of the scandal has expanded. Attorneys for celebrities and politicians whose phones were hacked told the press they intended to sue the paper. And the arrests of the paper's former news editor and current chief reporter on the suspicion of intercepting private voice mail messages signaled they might have a case.

News International had previously dismissed the hacking allegations as an isolated case fanned by their journalistic competitors. But it's not clear the apology will contain the damage to the reputation of some of the news executives involved.

Andrew Neil, a former top Murdoch deputy, says the newest revelations raise "the old Watergate question: Who knew, and when did you know it?"

Neil, a past editor of The Sunday Times of London and founding chairman of Murdoch's Sky TV, is now chairman of a rival press company.

"If it's now accepted the 'rogue reporter' defense has bitten the dust and was smashed to smithereens, if it's now accepted that it was going on all over the place in this newsroom, then it beggars belief that no one in senior editorial management — or the management itself that was having to write the checks to pay for this — it beggars belief that they didn't know," Neil said. "It is frankly incredible."

Many critics are now also asking why the initial pattern of illegal hacking was not more aggressively investigated by the police at the time. Notes secured from the private investigator included several thousand names and 30 audiotapes, including an unspecified number of voice mail recordings.

Since then, the Metropolitan Police force has been accused of being too cozy with the News of the World. The deputy police commissioner who headed the initial phone-hacking inquiry now writes a column for its tabloid's sister paper, The Times of London.

Much has also been made of parliamentary testimony in 2003 by Rebekah Brooks, then editor of the Sunday tabloid, in which she acknowledged, "We have paid the police for information in the past."

Brooks is now chief executive of News International, overseeing all of the company's British newspapers.

"Now the view genuinely is that this showed that the police were either incompetent, or more worryingly, that there was a semi-conspiracy — that they were too close to the News of the World ... and therefore didn't want to investigate further," says Greenslade, the former Sun and Sunday Times of London editor.

On Monday, Brooks issued a statement "clarifying" her testimony — saying she was referring to the press in general, and that she had no knowledge of any such payments from her newsroom.