Accessibility links
Deval Patrick's 'Reason to Believe' Memoir: A (Not) Likely Story Even Massachusetts Gov. Deval Patrick himself describes the story of his life — from growing up on welfare in Chicago to thriving in business and politics — as "improbable." But he had a lot of help, he says, from a loving family and supportive teachers.

Listen
'Lessons' From Deval Patrick: A (Not) Likely Story 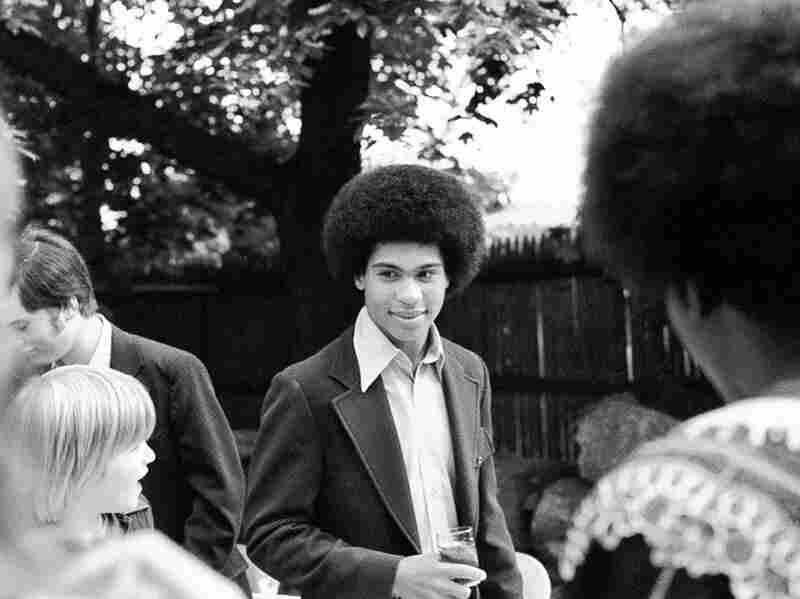 In 1970, a scholarship took Deval Patrick from Chicago's South Side to Milton Academy, a boarding school in Massachusetts. Courtesy of Gov. Deval Patrick hide caption 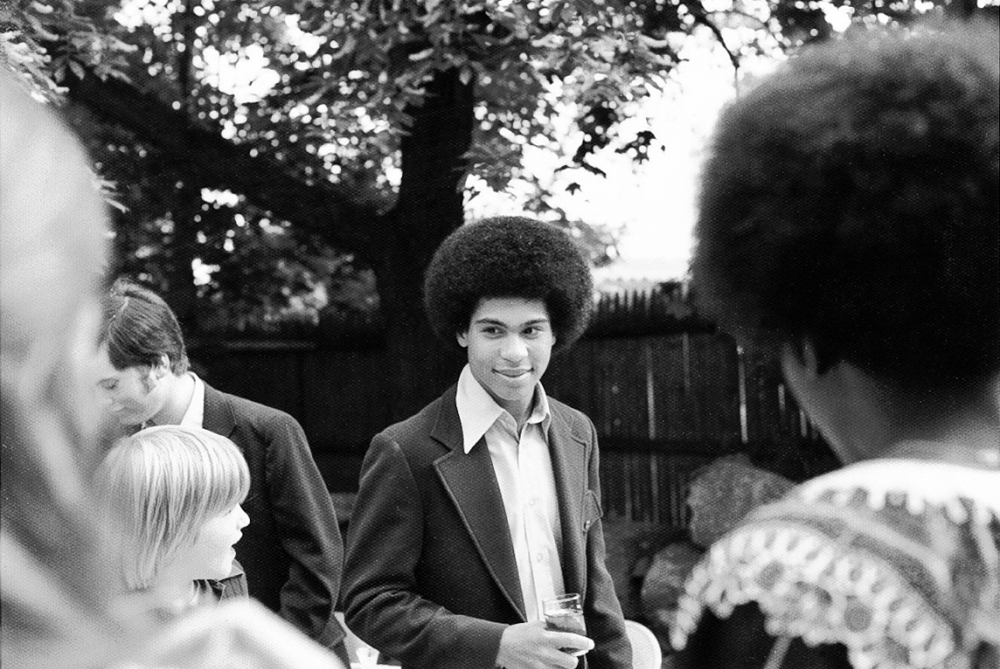 In 1970, a scholarship took Deval Patrick from Chicago's South Side to Milton Academy, a boarding school in Massachusetts. 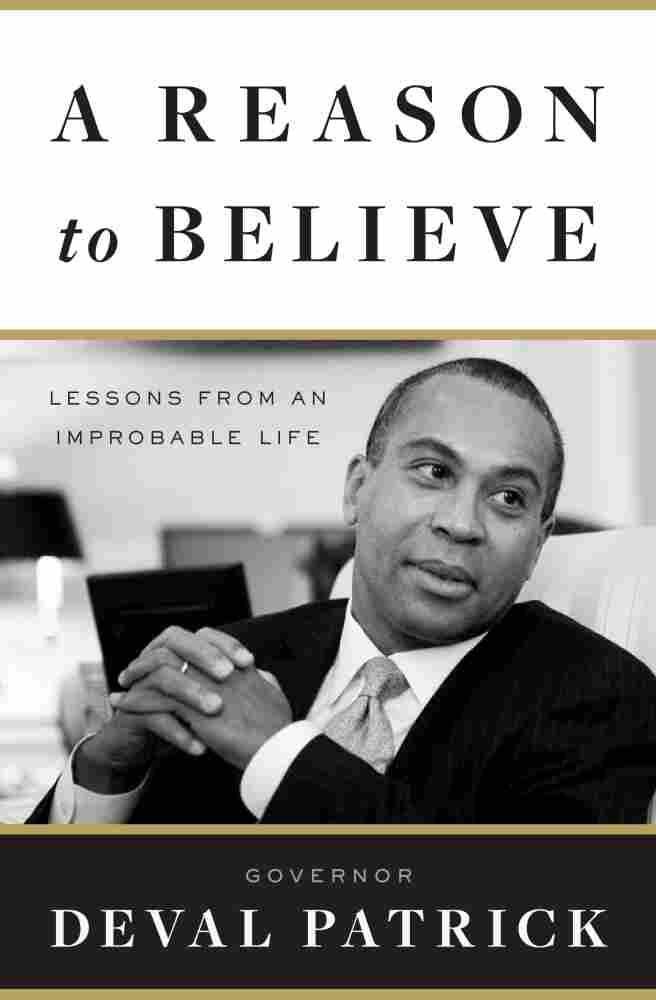 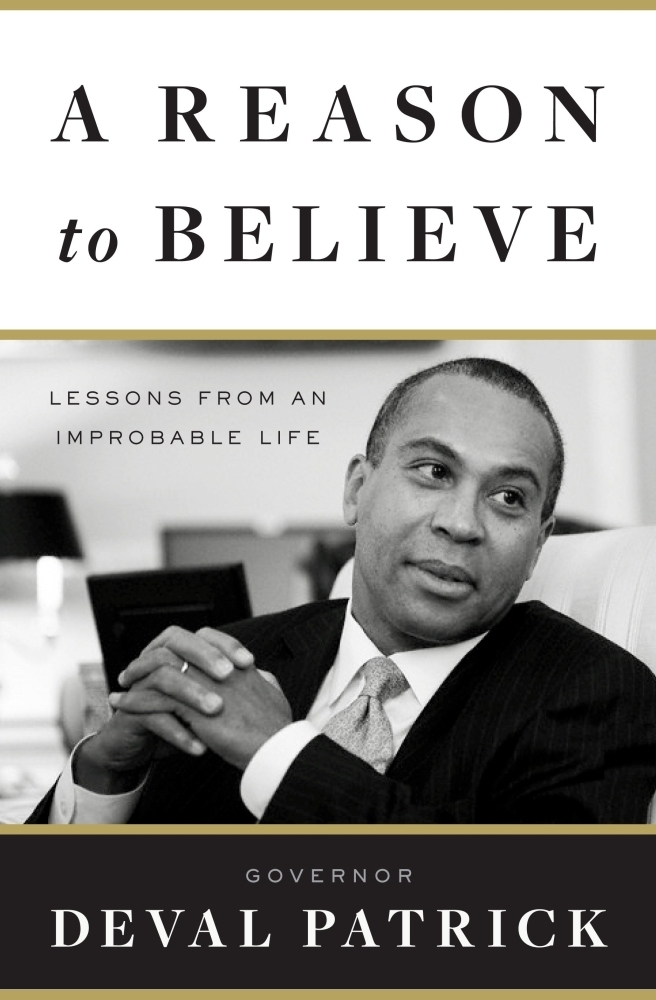 Even Massachusetts Gov. Deval Patrick himself describes the story of his life — from growing up on welfare in Chicago to thriving in business and politics — as "improbable."

That's why the word is part of the title of his new memoir, A Reason to Believe: Lessons from an Improbable Life. Speaking with Morning Edition co-host Renee Montagne, Patrick says his success stems from having supportive family and teachers — and from learning to look at life's lessons as "gifts."

Long before he became a top executive at Texaco and Coca-Cola; years before he attended Harvard Law School and argued a Supreme Court case, Deval Patrick was a 4-year-old boy, chasing his father down the sidewalk.

That was in the 1960s, when his parents were finally splitting up for good. Patrick says that the day his father left their basement apartment on Chicago's South Side is burned into his memory.

Reading from his memoir, Patrick describes that day:

As my mother, in tears, slumped in a chair, my father stormed out of the apartment, up the stairs to the street, and was gone.

I chased after him — a four-year-old in despair — while he strolled away angrily, shouting at me, 'Go home! Go home!'

About a block down, he lost his patience, turned suddenly in a rage, and slapped me.

I sprawled out on the sidewalk, burning my palms on the pavement. From that position, I watched him walk away.

After that day, Patrick's father, jazz musician Laurdine "Pat" Patrick, was in touch with the family only sporadically.

Learning To Hope, Getting 'A Break'

Patrick grew up on welfare, going to large (and sometimes violent) public schools. But he still had hopes for a better future — thanks to his mother and his grandparents, and other adults in their neighborhood.

And he says that often, he got the love and support that he needed the most from teachers. Some of them even became his mentors.

"It was teachers who were affectionate, and outwardly expressive about that, and encouraging," Patrick says.

In 1970, when Patrick was 14, he got what he calls "a break" — a scholarship that sent him to Milton Academy, a private boarding school in Massachusetts.

It was quite a change, Patrick says. At his new school, "summer" was often used as a verb; "jacket" referred to a blazer, not the windbreaker his grandparents had bought him in Chicago. But he adjusted — and after Milton, he went on to attend Harvard, where he also went to law school.

A Thaw In A Tortured Relationship

Patrick spent a summer during law school working in Washington, D.C. And on his 25th birthday, his father happened to be in town, playing baritone saxophone with a quartet. He invited his son to the show.

"I hadn't spent a birthday with him since I was three," Patrick writes in his book.

But he went to the show — at a venue called the Pigfoot — and his father dedicated a song to him: "I Can't Get Started."

Reading a passage from his book, Patrick quotes a line from the song: "I've been around the world in a plane; I've started revolutions in Spain; the North Pole I've charted. Still, I can't get started with you."

Patrick writes that his father looked him in the eye while he played the song, "full of regret and longing, all at once."

"I gazed right back at him, knowing what he was trying to say: Life is too short to go on like this. Let's find a way to come together."

Trying To 'Give Something Back'

As a successful politician whose father was either absent or a source of conflict in his family, Patrick is not alone — both Barack Obama and Bill Clinton had similar relationships with their fathers. When asked how that experience might have affected his political career, Patrick begins his answer by saying, "I feel like I should be lying down to answer that question."

"I view the experiences that I have had — both the tough ones and the pleasant ones — as gifts," he says. "They've been full of lessons. And I've learned to be open to those lessons."

Patrick is now in his second term as Massachusetts' governor. According to state law, he could run for re-election again. But that's not his plan — the governor feels he's achieved his goal in two terms.

"This is really another manifestation, for me, of how to give something back," he says, "how to offer some ways in which we can make a better way for someone else — just as these very private lessons have made a better way for me."

Excerpt: 'A Reason To Believe' 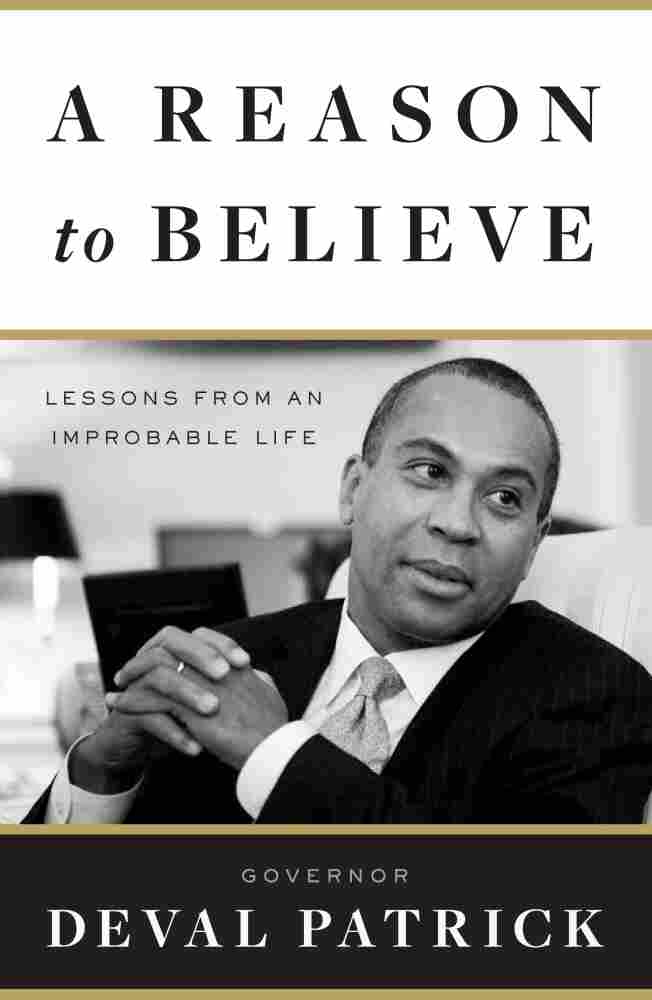 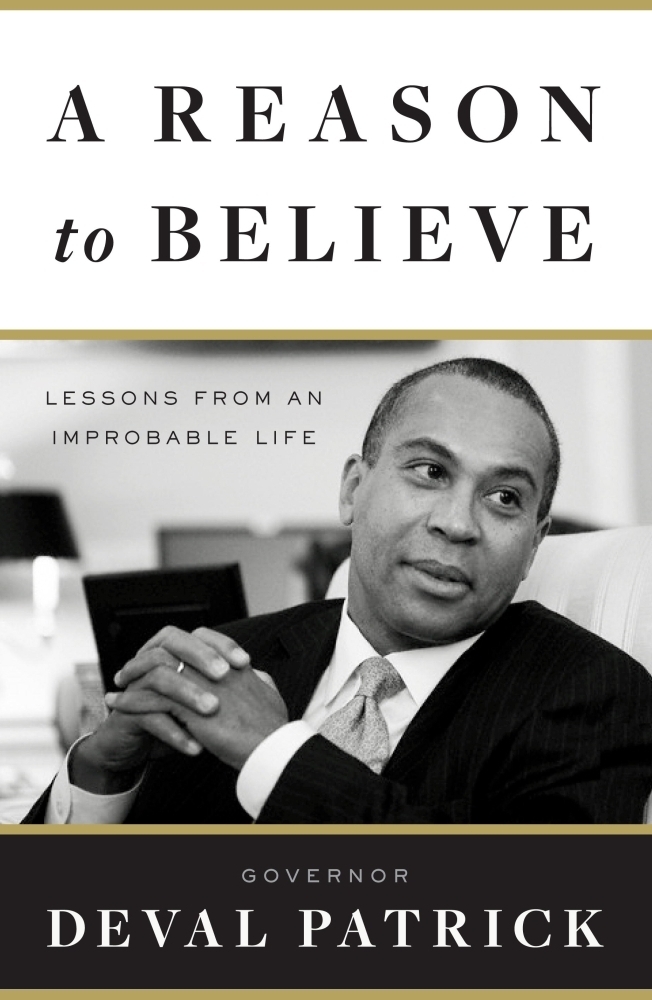 Once, when I was fifteen, I had to catch a bus to meet a friend, and I was running late. We lived on the South Side of Chicago, near the corner of 54th Street and Wabash Avenue, so I raced south down Wabash past the whitewalled commercial bakery that always smelled of sour yeast, across the weed-filled median on Garfield Boulevard, and east down a block past the liquor store, the Laundromat, and the shop that sold live chickens to housewives. The shopkeeper could slaughter the bird or the women could do it themselves at home.

I reached the bus stop just as the familiar green and white CTA bus pulled up, oily and wheezing. I climbed the steps, reached for my coins, and only then realized that I did not have enough for the fare. The driver, a world-weary black man with a gray grizzle and salt-and-pepper mustache, had already jerked the bus into gear and started down the street. He gave me a withering look and told me gruffly to sit down, pointing to a seat close to the door. I obeyed.

I braced myself for a stern lecture on the futility of trying to pull a fast one, and I assumed he would kick me off at the next stop. My mouth was suddenly dry, my stomach churning. Embarrassed and stammering, I stood again and started to explain that I had been away (I was a sophomore at a boarding school in New England) and did not know the fare had changed. He looked me over with the sure gaze of a man who had heard every excuse and was practiced in sizing up passengers. He turned his eyes back to the road. His expression abruptly softened.

I thanked him and sat back down heavily, overwhelmed. Expecting humiliation, I instead received a simple act of grace, and for whatever reason — perhaps just the kindness in the face of certain reprimand — that moment left a lasting impression. It was a reminder that I should do for others what he had done for me.

Nearly forty years later, I can reflect on what a blessing it has been to encounter so many people who chose to help someone in need — not because they had to but because they simply could. They showed mercy or compassion, and through their action taught a lesson. Sometimes these deeds, bold in their scope and lofty in their ambition, create headlines. More often, they are performed anonymously, quietly, reaching no further than the heart they were intended to touch. In whatever form, such acts create their own legacy of hope and inspiration. They pass something on. This book is my effort to share some of the lessons that have imbued me with core values, shaped my identity, and made me want to be a better man.

My life is often described as "improbable." Because I grew up in a broken home and in poverty, my academic career at Harvard College and Harvard Law School is sometimes called "improbable." My legal career, which included winning an argument before the U.S. Supreme Court and suing an Arkansas governor named Bill Clinton, who later appointed me assistant attorney general for civil rights, is called "improbable." My corporate career, which included service as a senior executive at two of the most highly recognized companies in America, Texaco and Coca-Cola, is called "improbable." My political career is described variously as "improbable" or "impossible": In my first race for elective office, lacking name recognition, connections, and money, I became the first African-American governor in the history of Massachusetts.

Of course, I acknowledge the unlikelihood of my good fortune. I also recognize the hard work and discipline that have made it possible. But above all I cherish and celebrate the many people who have taken moments to enlighten me, to renew my ideals, and to spur me to action. There have been teachers and preachers, supervisors and colleagues, friends and family. There have also been strangers, many strangers — whether on a dairy farm in Massachusetts or in the sands of the Nubian Desert — who through their words or deeds have delivered transcendent messages about life, faith, and friendship. I have always tried to listen. And they have made all the difference.

This book is a tribute to them. It is an effort to distill some of the many lessons that have made me the idealist I am and to convey them in a way that is meaningful and lasting. My journey is far from over. There are lessons yet to learn. But my experiences have been rich, giving me a broad window into the lives of others, and I believe these experiences offer a guiding light for other seekers. That's a bold statement, but it's grounded in a truth taught by my "improbable" life: Each of us, from the mightiest to the meekest, has the capacity to teach, inspire, and ennoble.

Reprinted from A Reason To Believe by Deval Patrick. Copyright 2011. Published by Broadway Books, a division of Random House Inc. 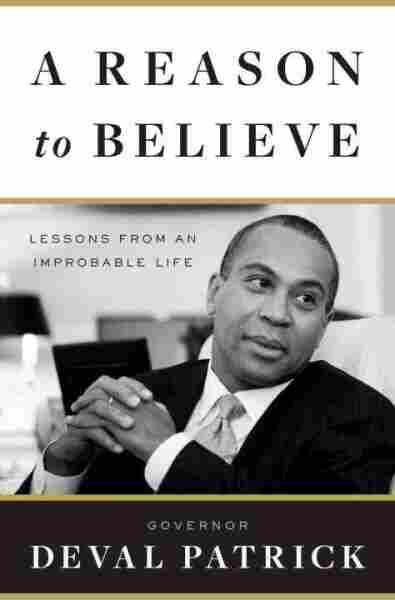 A Reason to Believe

Lessons From An Improbable Life