Accessibility links
S.C. Marks The Day Cannons Roared At Fort Sumter The first shots of the Civil War were fired 150 years ago Tuesday at Fort Sumter in South Carolina. The state was the first to secede from the Union; now, it's treading carefully as it commemorates a war that left more than 600,000 soldiers dead. 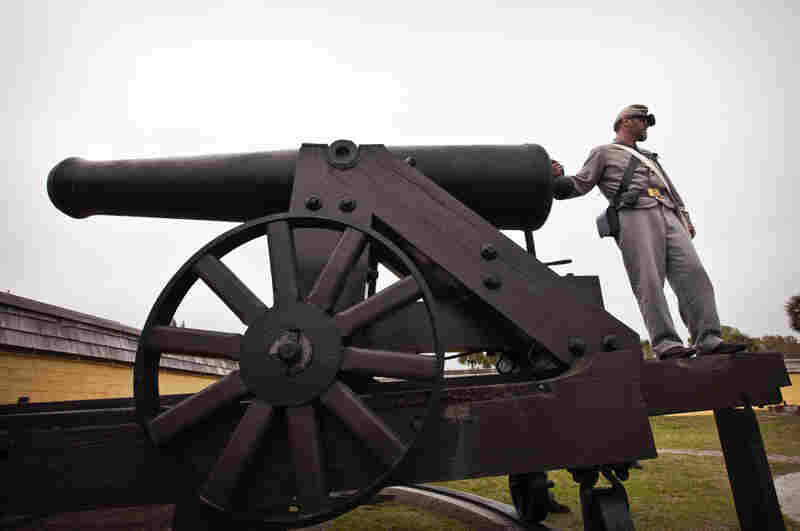 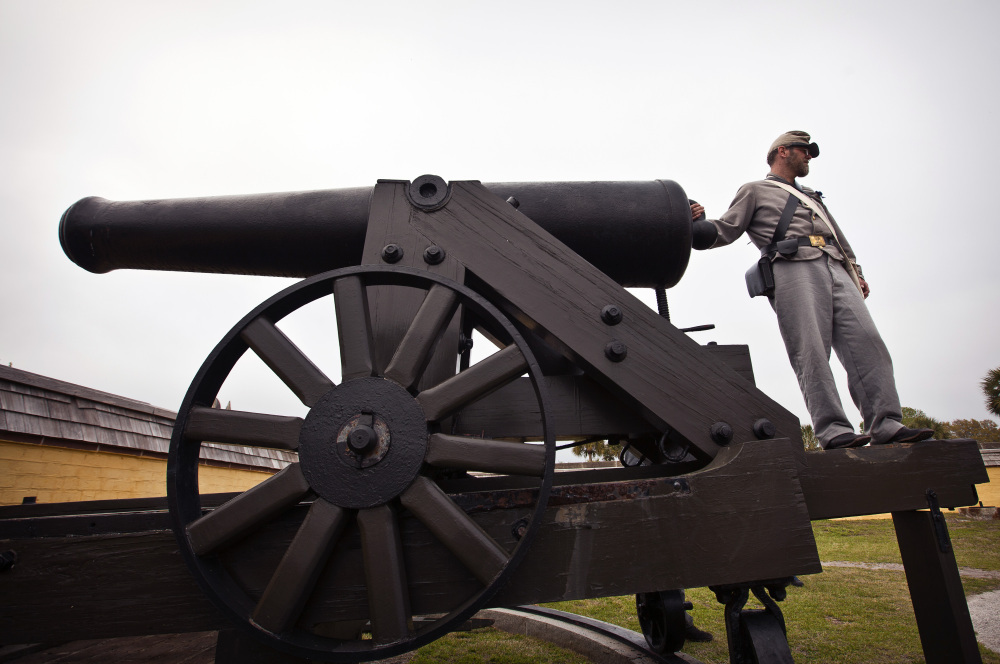 The first shots of the Civil War were fired 150 years ago Tuesday at Fort Sumter in South Carolina. The state was the first to secede from the Union; now, it's treading carefully as it commemorates a war that left more than 600,000 soldiers dead.

Fort Sumter is an island built of rock and granite at the mouth of Charleston's harbor, accessible only by boat. It was federal government property, and after South Carolina seceded, Confederate soldiers ordered the Union troops to leave. When they refused to go, the Confederates attacked the fort.

On April 12, 1861, they bombarded Fort Sumter in an attack that would last more than a day.

"It was a hard time for the United States and this part of the world," says Tim Stone, park superintendent at Fort Sumter.

There's a delicate balance in commemorating — yet not celebrating — what some call the War Between the States. On the anniversary 50 years ago, there were parades and fireworks. Stone says that this time, it will be different.

"We'll have two beams of light that will be one beam," he says, "and then on April 12, those beams will split up, to symbolize the splitting of our country."

There will be a concert, art exhibits and lectures. And hundreds of people have come to Charleston to stage a re-enactment of the war's beginning.

Both Union and Confederate re-enactors are camping out at historic sites, including Fort Moultrie. Back in 1861, it was one of the Confederate strongholds that fired on Fort Sumter. 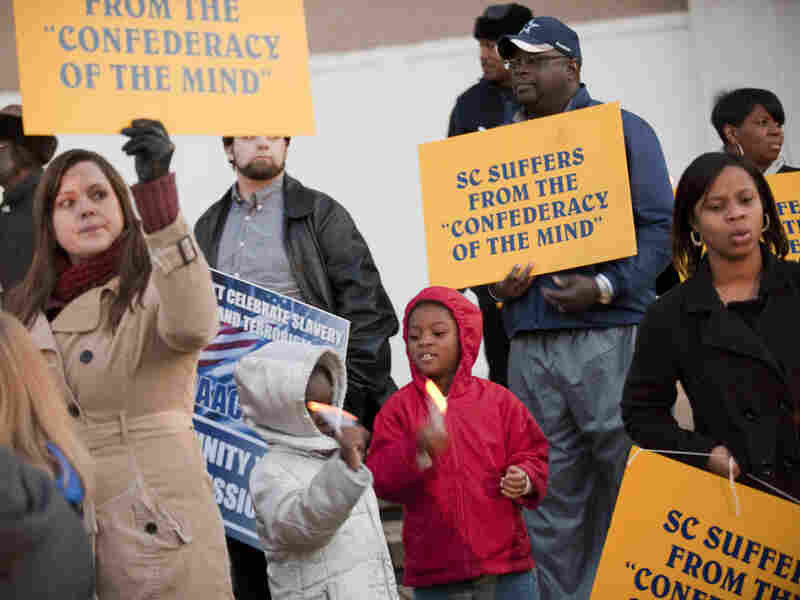 In December, the NAACP organized a protest against a "Secession Ball" held to commemorate the anniversary of South Carolina's decision 150 years ago to secede from the United States. Stacy Pearsall/AP hide caption 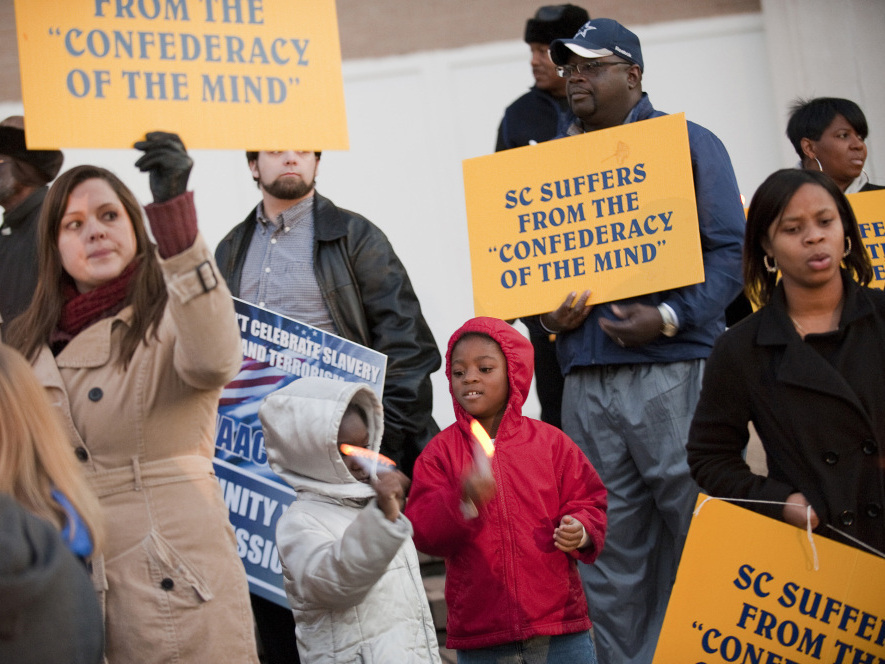 In December, the NAACP organized a protest against a "Secession Ball" held to commemorate the anniversary of South Carolina's decision 150 years ago to secede from the United States.

"We have soldiers coming in from all across the United States, from North Carolina and Maryland, and points west of the Mississippi," says Bruce Blackmon of the Palmetto Battalion, South Carolina's largest re-enactment group.

Blackmon, who portrays an officer in the Confederate army for re-enactments, says he knows there are differences over how this bloody war should be remembered. But he says he has told his group to focus on portraying life as it was back then.

Blackmon and others here say the issue of states fighting an encroaching federal government is still playing out in battles on Capitol Hill today, including those over the budget and health care reform.

Mixed Feelings, And A Troublesome Flag

Those who oppose the weeklong events disagree with what they see as romanticizing the antebellum South. The Rev. Nelson Rivers III, of the NAACP, says people who believe the war was fought over states' rights are not confronting the real cause: slavery.

"No matter how you dress it up, how you try to revise history," Rivers says, "when you're finished with this story, the war was about the South, and my state in particular, South Carolina, wanting to be able to hold black people as property. That's wrong."

The NAACP is planning its own "teach in" event Tuesday, to talk about the effects of the war and slavery.

Charleston's longtime Mayor Joe Riley calls the sesquicentennial an opportunity to learn — and to show people that both his city and the country have changed.

But South Carolina did not elect Barack Obama — and the NAACP is boycotting the state because the Confederate flag still flies on the grounds at the state Capitol.

A City That Keeps History Alive

In Charleston's historic district, the Slave Mart Museum tells the story of the slave trade in the South — of the tens of thousands of people who were bought and sold here. Many Charleston residents say they want people to know more about this difficult part of history.

"All this stuff that we're going through — through slavery — all of this developed what America is today," says college student Rashida Beach, 19. "So it shouldn't be something as in, 'Oh, this is bad, and this is good.' You should just take it for what it is, and move on from that."

The commemoration of the first shots fired at Fort Sumter is just the beginning of four years of events across the South that will focus on the Civil War and its battles.

The audio and a previous Web version of this story incorrectly said that Fort Sumter was occupied by Union troops and that Confederate soldiers decided to take it back. The fort was actually property of the federal government and not under occupation.