Accessibility links
Cleaning Up Fukushima: A Challenge To The Core The Japanese government raised its assessment of the crisis at Japan's stricken Fukushima Dai-ichi nuclear power plant to the highest possible level. And it could take more than 10 years and $10 billion to clean it up. Though engineers know how to handle the basic operations, nobody's ever tried a nuclear cleanup on this scale before.

Listen
Cleaning Up Fukushima: A Challenge To The Core 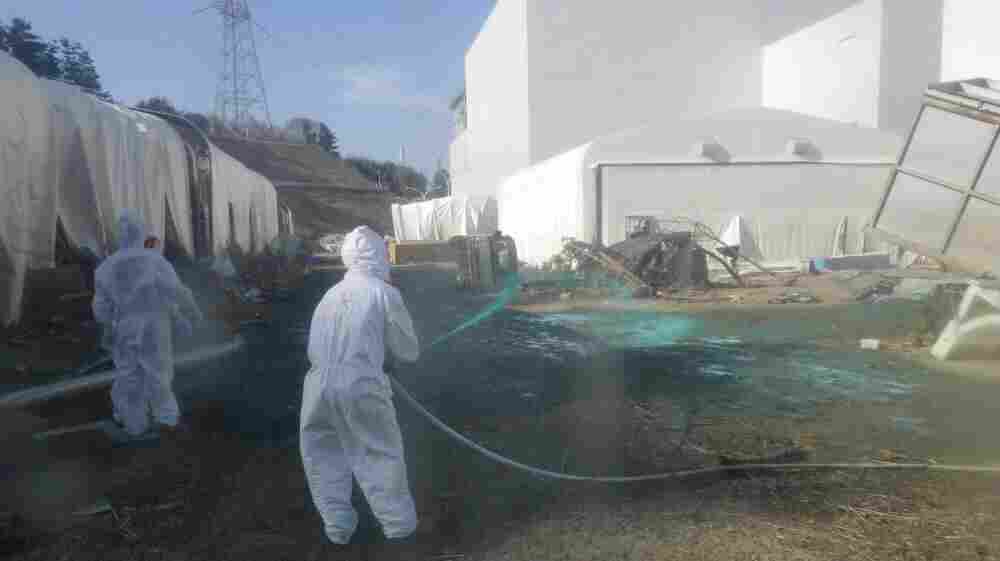 Workers at the Fukushima Dai-ichi nuclear power plant spray a substance to help reduce dust on April 1. The cleanup operation at the facility could take more than a decade. TEPCO hide caption

The Japanese government raised its assessment of the crisis at the troubled nuclear power plant to the highest possible level.

The rating was bumped up from five to seven on an international scale used to evaluate the seriousness of nuclear incidents.

The move was based on new data on the amount of radiation released in the early days of the crisis, not on any recent change in the plant's status. 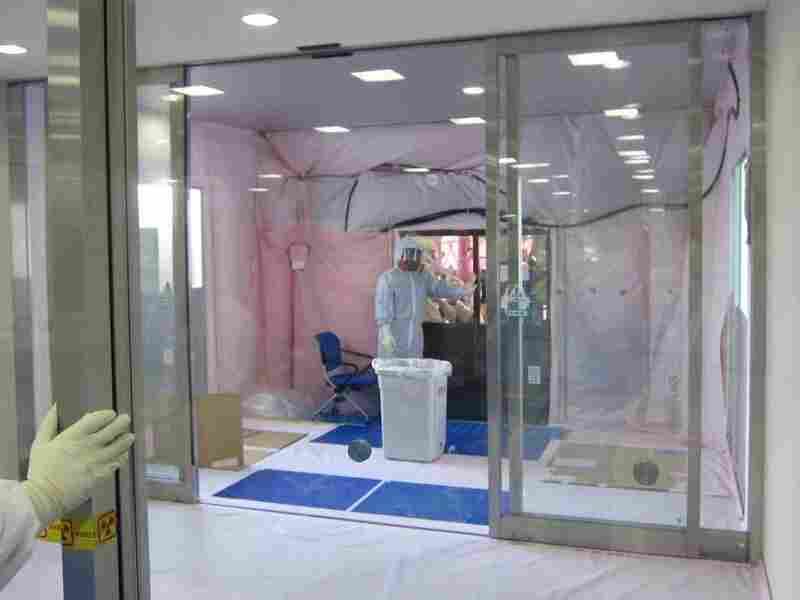 A radiation decontamination area was built into the entrance of a building at the Fukushima Dai-ichi power plant. Damage to the facilities and the reactor buildings is slowing efforts to stabilize the nuclear crisis. TEPCO hide caption 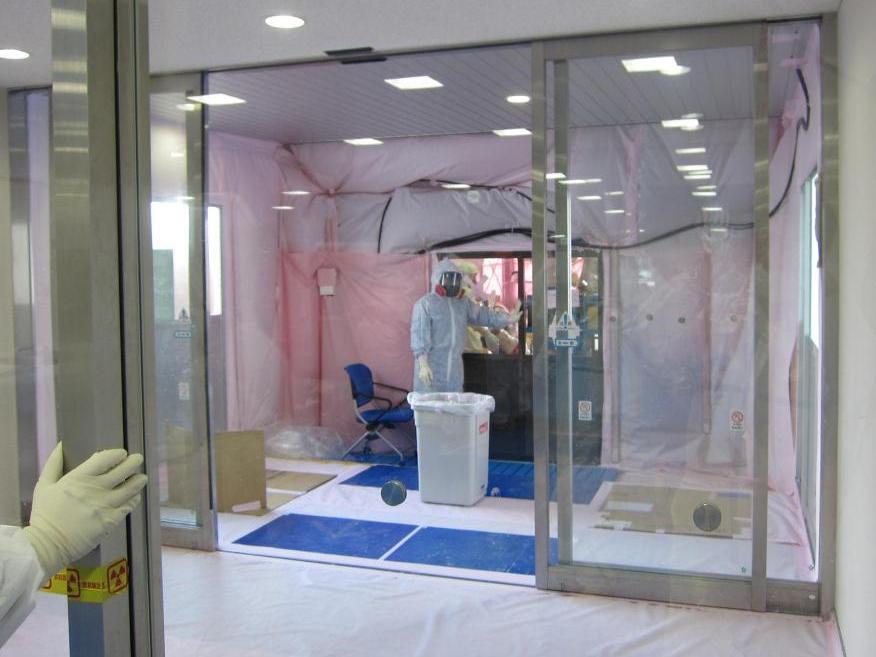 A radiation decontamination area was built into the entrance of a building at the Fukushima Dai-ichi power plant. Damage to the facilities and the reactor buildings is slowing efforts to stabilize the nuclear crisis.

The accident in Japan is now in the same category as the Chernobyl disaster in the Soviet Union.

But the Japanese government emphasizes that the Fukushima Dai-ichi plant has released only one tenth the amount of radiation released at Chernobyl, meaning the lasting effects on human health in Japan are expected to be far less severe.

Nuclear engineers working at the Japanese plant are dealing with two problems at the same time: They are working to fully stabilize the plant's reactors, and they are trying to control the release of radioactive material.

It could take weeks or months to stabilize the reactors. And containing and cleaning up the radioactive material could take at least 10 years, at a cost of more than $10 billion. Even though many of the details about what's happening at the reactors are not known, experts can predict the tasks ahead for workers.

Back in 1979, nuclear engineer Lake Barrett coordinated cleanup at Pennsylvania's Three Mile Island reactor for the Nuclear Regulatory Commission. He breaks down the cleanup challenge to the basic elements of ancient Greece. The Greeks had fire, air, water and earth. At Fukushima, it's pretty much the same: energy, air, water and solids.

"So if you go back to the four basic principles, what the engineers are doing in Fukushima is first they have to deal with energy dissipation — that is the cooling of the decay products in the core — keep the core cool," Barrett says.

Over the past month, they've managed to do that pretty well, Barrett says, but at a price: They are cooling it with copious amounts of water, which has led to the continued venting of sometimes radioactive steam. It's nowhere near as bad as it was in the early days of the crisis, Barrett says, but gaseous releases will continue to be a problem until the complex can shift to a better cooling system. 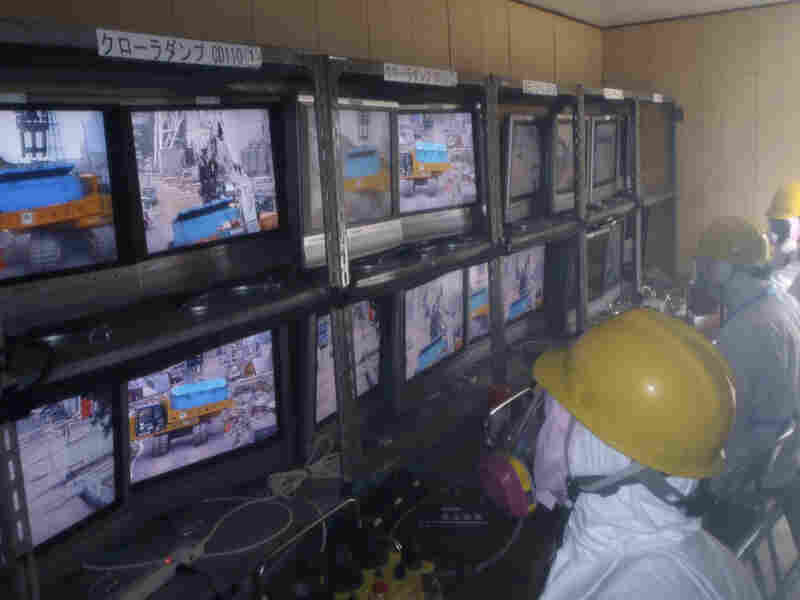 Workers operate remote-controlled rubble-removing equipment at the Fukushima Dai-ichi nuclear complex. Though robotic machines will be able to clear some of the larger debris from the facility, some people will most likely be needed to work inside the reactor buildings. AP hide caption 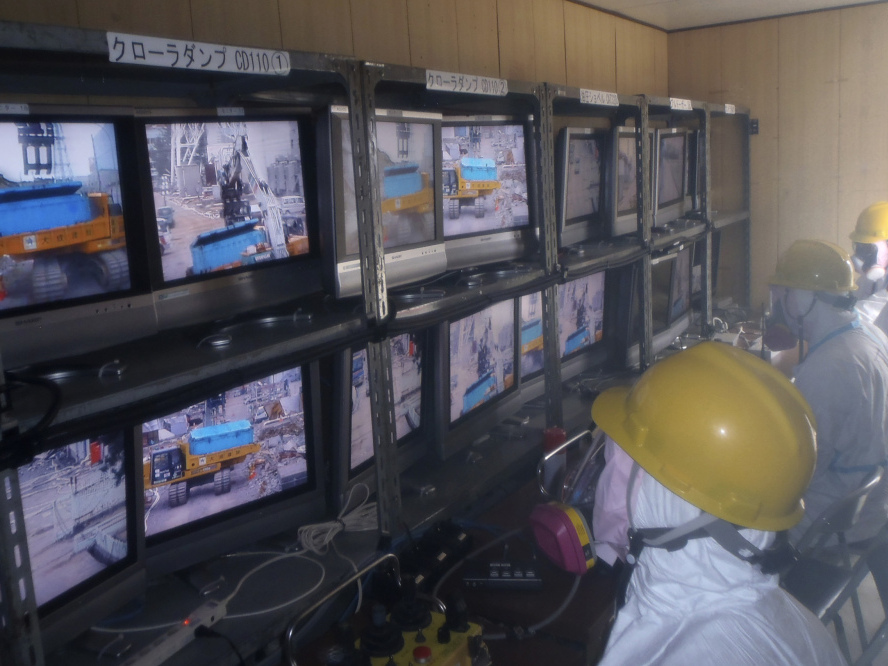 Workers operate remote-controlled rubble-removing equipment at the Fukushima Dai-ichi nuclear complex. Though robotic machines will be able to clear some of the larger debris from the facility, some people will most likely be needed to work inside the reactor buildings.

For now, there's a watery mess at the plant.

"In the case of Three Mile Island, we had about half a million gallons of very highly radioactive water in the basement of the containment building," Barrett says. "It was about 10 feet deep. They're facing the same situation in Fukushima, but they have three of these cores that have severe damage to them, so they probably have tens of millions of gallons of the same highly radioactive water that they're dealing with."

That's a huge challenge, but engineers at Three Mile Island were able to decontaminate the radioactive wastewater.

Fukushima Dai-ichi may or may not have any functioning systems to clean up its water, and there's no telling how much more radioactive water is going to be produced during the continuing operations there. But Barrett says the plant does have large tanks for storing contaminated water and a barge is on the way to store more.

Getting To The Core Of The Cleanup

First Eyes Inside Nuclear Plant May Be A Robot's

First Glimpses Of The Workers Inside Japan's Troubled Nuclear Plant March 24, 2011
At Crippled Reactors, Is Time On Our Side? March 18, 2011

Once the energy, gas and water aspects of the nuclear crisis are under control, the most highly radioactive materials — the solids in the reactor cores — remain. Just getting to them is a problem.

After the Three Mile Island accident, the core was still intact, but overhead cranes that usually do the lifting work were damaged by fire. So workers first had to refurbish the cranes to lift the reactor's lid. In fact, it was five years until they could look inside the reactor; only then did they discover that 30 percent of the nuclear core had melted. Still, the engineers on the scene figured out how to deal with that.

"They worked down through 20 feet of water for shielding with long tools and started picking up the pieces of broken fuel in the core and placing it in special canisters with vents and filters on them," Barrett says. They put those canisters in a transport cask and shipped them to Idaho, where they are stored like other waste from nuclear reactors.

Japanese engineers will probably try to do the same basic thing at Fukushima Dai-ichi.

Leo Lessard, a nuclear engineer at the French company Areva, says just getting to the cores at Fukushima Dai-ichi is going to be much more difficult than it was at Three Mile Island. For starters, the tops of two buildings have collapsed, so that debris will have to be cleared.

"A lot of that material is probably very radioactive, so there will have to be shielding and other precautions incorporated in order to protect workers who have to do some manual operations in those areas," Lessard says.

Robots may be useful, he says, but don't assume they can pick through all that debris. And if it turns out that some of the nuclear fuel has managed to leak through a hole in the reactor vessel — as some officials have speculated — it will be quite a challenge to scoop it up and put it into a shielded container.

"In that case, you have a tremendously high radiation field, as opposed to having it underwater, where the water is providing complete shielding," Lessard says. He expects the cleanup to take more than a decade.

Barrett says to count on cleanup costing $10 billion. Engineers can break the problem down to the basics, and they know how to do each individual step — but nobody's ever tried a nuclear cleanup on this scale before.