Accessibility links
Japanese Youth Step Up In Earthquake Aftermath While their parents found their identities in their work, this generation of 20-somethings has been criticized as self-absorbed and materialistic by social commentators and older Japanese. Then along came the events of March 11 — Japan's greatest calamity since World War II. 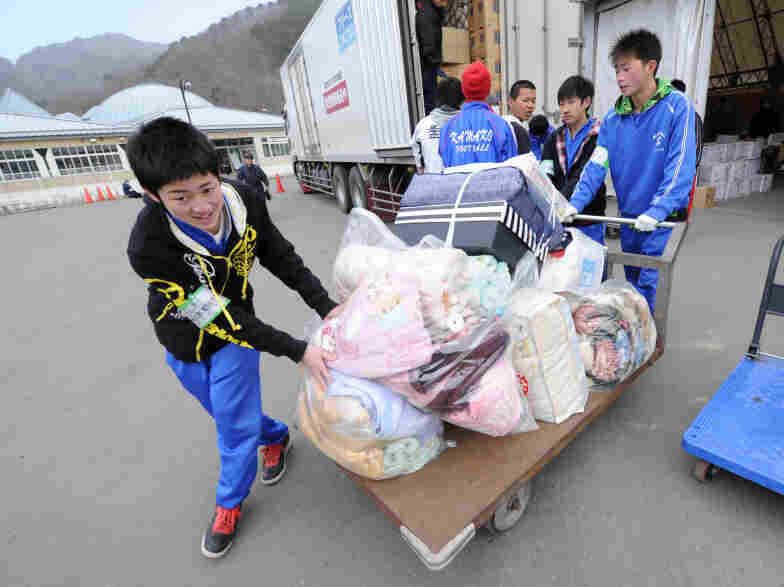 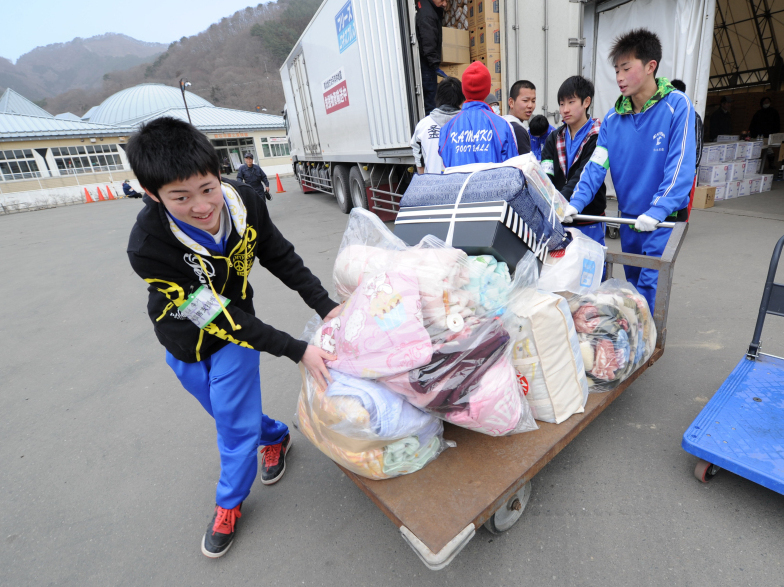 Volunteers push a trolley filled with blankets destined for displaced people in the city of Kamaishi in Iwate prefecture.

Amid the destruction and devastation left by Japan's earthquake and tsunami, Japanese youth have stepped up in volunteering to help.

Aided by social media, young people unused to pitching in are streaming toward the devastated northeast coast, eager to deliver relief supplies and clean up.

Kenta Umeda arrived in the town of Ishinomaki last weekend from Tokyo to help haul garbage out of neighborhoods that were destroyed by the tsunami. For the trip, he loaded some new music into his iPod, hung an alarm whistle around his neck and tucked some drumsticks into his backpack.

"I thought it would be cool," the art student, 25, says with a smile, wearing a raincoat and work boots. "Because we're all Japanese, that's why I came. In terms of myself as an artist, I want to share the emotion of the people affected by this disaster and take that experience back with me."

Umeda is part of a wave of Japanese young people who say they feel needed in this crisis.

Many Japanese in their 20s have had their career ambitions blunted by an economy that no longer offers job security. While their parents found their identities in their work, this generation has been criticized as self-absorbed and materialistic by social commentators and older Japanese.

Then along came the events of March 11 — Japan's greatest calamity since World War II.

"Instead of having this kind of derisive discourse where young people are negatively judged for choices they make, they may be lauded for volunteer activity they're contributing at this time of need," says Kyle Cleveland, a sociologist at Temple University's Japan campus who studies Japanese youth culture.

Volunteers of all ages, as well as nongovernmental organizations, have come from across Japan to this tent city on the campus of Ishinomaki Senshu University. Six thousand volunteers are helping out in Ishinomaki, where the tsunami shredded houses and hurled cars into cemeteries.

Friends Naoya and Satoko are both 23 and recent college grads looking for work. They're dressed in raincoats and rubber boots, relaxing in the tent village after spending the day shoveling muck.

They say the bad economic situation has left them with time on their hands and since they can't afford to help with money, they chose to help with time.

The aftermath of the tsunami is very different from Japan's last epic disaster — the Kobe earthquake in 1995. Not only were there fewer volunteers, because the scale of the destruction was limited, but there were no social media to link up like-minded individuals.

Futoshi Sato, who works at Betty Tattoo Parlor in Sendai, says his friends have been using a social media website called Mixi, the Japanese equivalent of Facebook, to coordinate aid.

"Here in Miyagi prefecture, people used Mixi to ask the victims who live in the tsunami-hit cities of Ishinomaki and Kesennuma how people could help them and what they needed, he says. "And they told us how they wanted us to help."

A group of volunteers is scraping mud out of a flower bed at an elementary school in Ishinomaki, to allow the spring bulbs to bloom in a few weeks.

Kawamura Koji, a 20-year-old economics student at the prestigious Keio University in Tokyo, is spending his spring break in an orange work coat pushing a wheelbarrow.

"I'm going to work as a volunteer for two weeks or three weeks," he says.

Koji is asked what he thinks about the characterization that Japanese youth are apathetic. He disagrees adamantly.

"Ah no, no, no, no. That's a lie," he says. "Many people are really concerned about Fukushima so they really want to work as volunteers."

He says the unfolding nuclear crisis has energized many of his friends, who now believe nuclear power is dangerous and worry radiation is poisoning Japanese soil.

To hear him tell it, Japan's nuclear reactor disaster may become a defining issue for a generation of formerly apolitical Japanese youth.