Accessibility links
Will Cotton Be King Again? Crop Gets Boost In Kansas With cotton prices rising to record highs thanks to a global shortage, U.S. cotton farmers are stepping up their acreage. In Kansas, a state long dominated by wheat and corn, it's the new crop on the block.

Listen
Will Cotton Be King Again? Crop Gets Boost In Kansas 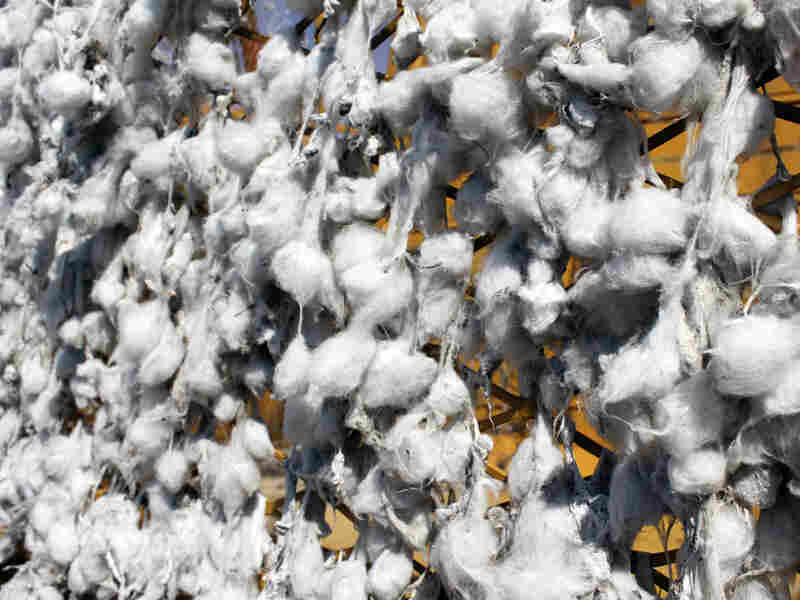 Seed cotton sticks to the wire cage of a trailer used to bring a harvested crop from the field. Eric Durban/Harvest Public Media hide caption 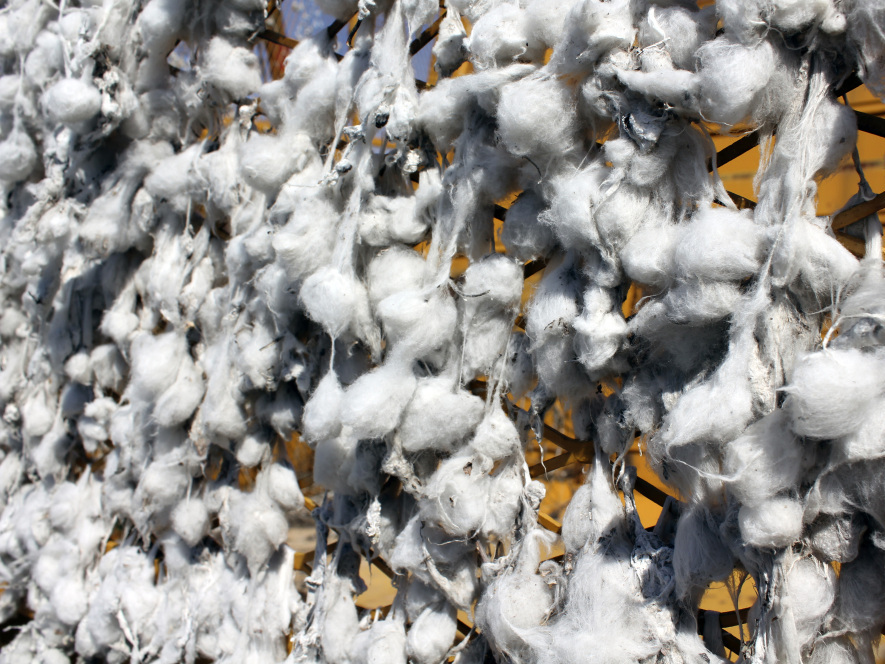 Seed cotton sticks to the wire cage of a trailer used to bring a harvested crop from the field.

In Liberal, Kan., if it weren't for the rogue bits of cotton resembling light snow around the building, you'd have to step inside the Plains Cotton Cooperative Association warehouse to realize what's being stored here. Unlike the iconic grain elevators that dot the Midwestern landscape, this huge metal warehouse in southwest Kansas is the only one of its kind in the state.

There's a method to the madness though, he says. A detailed computer system shows him the exact location of each bale here.

"You know, you look at the size of this building and it's rather large, and you would think it's like finding a needle in a haystack," he says.

Cotton is traditionally seen as a Southern crop, not something grown in America's breadbasket. But in Kansas, a state long dominated by wheat and corn, it's the new crop on the block.

Agriculture economists forecast that Kansas farmers will plant 20,000 acres of cotton this year, the fourth largest percentage increase of the 17 cotton-producing states. Virginia, another state new to the crop, is looking at the largest jump in cotton acreage.

Flooding in Pakistan and supply shortages in China and India have helped cotton reach price levels last seen during the Civil War. Much of the predicted 12 percent hike in U.S. acreage will go toward satisfying foreign demand.

Cotton has one important advantage over corn, and it concerns a topic Kansans know all too well: water. Cotton requires about one-third less water than corn.

Many western Kansas farmers irrigate from the rapidly depleted Ogallala Aquifer, so water use is on everyone's minds.

"I hate to just see it go down the tubes without something beneficial," says farmer Kent Dunn. "Not that corn's not beneficial, but, you know, it's trying to be a wise steward of what we have. We have come a long ways in the 30-some years that I've been around here as far as evolving applications of the water."

Dunn has rotated cotton into his southwest Kansas fields for almost a decade and now has about 1,500 acres devoted to the crop.

Kansas has more than 5 million acres in corn, dwarfing cotton acreage 75 to 1. But there is a lot of land here where cotton could be grown.

Cotton businessman Dick Cooper sees a time when corn may not be an option in parts of the state. 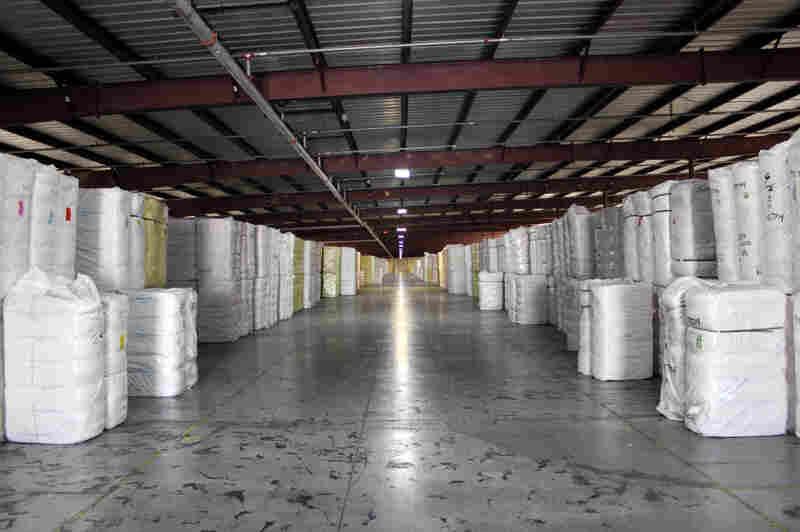 Bales of ginned cotton sit in a warehouse in Kansas. A shortfall in cotton production in China and India has led to a rise in U.S. production. Eric Durban/Harvest Public Media hide caption 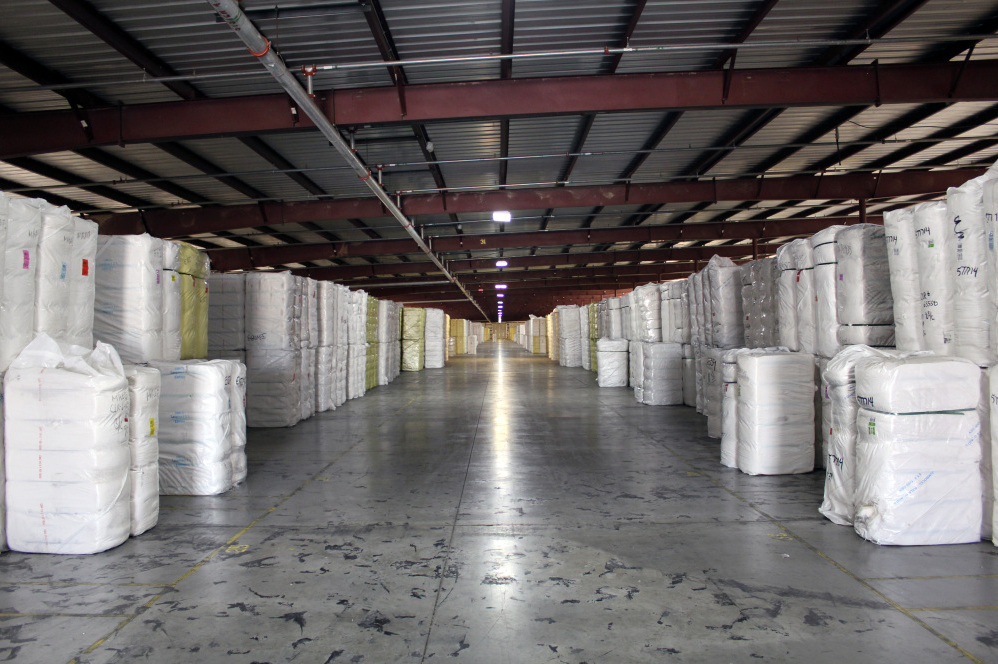 Bales of ginned cotton sit in a warehouse in Kansas. A shortfall in cotton production in China and India has led to a rise in U.S. production.

"If we can keep economic factors to where cotton is a profitable crop to grow, we know that we will be there when those wells will not support corn production," he says, "and will give those farmers another opportunity to grow a crop they can make money with."

And, he says, cotton grown in Kansas is among the best.

"The kind of quality that we grew this year and can grow more years than not — it's as good as cotton grown anywhere in the U.S. except for the Pima-type cottons in California and Arizona," Cooper says.

Some farmers, like Justin Shaddix, did plan to try growing cotton this year, but he just couldn't get away from the comfort of his traditional crop.

"We're alfalfa people, and that's basically what we've done for the last 20 years," he says. "[Planting cotton] seemed the right thing to do, because of the hay shortage that we're going to have."

At the co-op warehouse in Liberal, the shipping log shows last year's crop went far and wide — from Brazil to Taiwan. You may even have a piece of Kansas cotton in your pocket right now. That's because cotton makes up 75 percent of each U.S. dollar bill.