Accessibility links
Mentally Ill Languish In Emergency Rooms Most hospitals don't have a psychiatric unit, which means mentally ill patients often wait in emergency rooms for several days — sometimes even a week or more — before they can be moved to a psychiatric hospital. ERs are the wrong place for someone in the midst of a psychiatric crisis, an expert says. 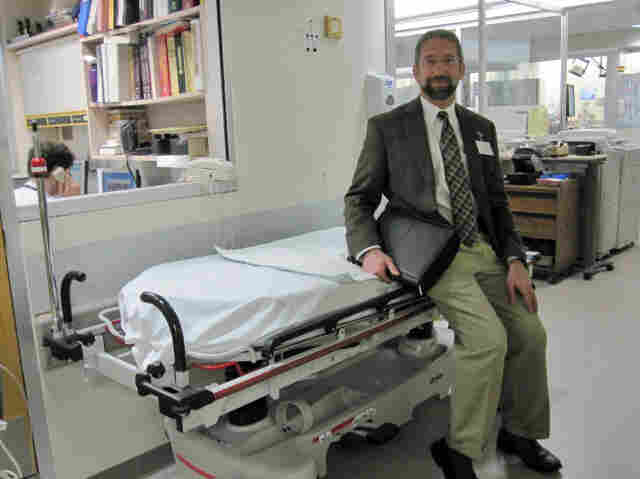 "The inside of the ER is kind of like Las Vegas," with a "24/7, 365 flow of activity," says Dr. Gary Bubly, an emergency physician at The Miriam Hospital in Providence, R.I. Jenny Gold for NPR hide caption 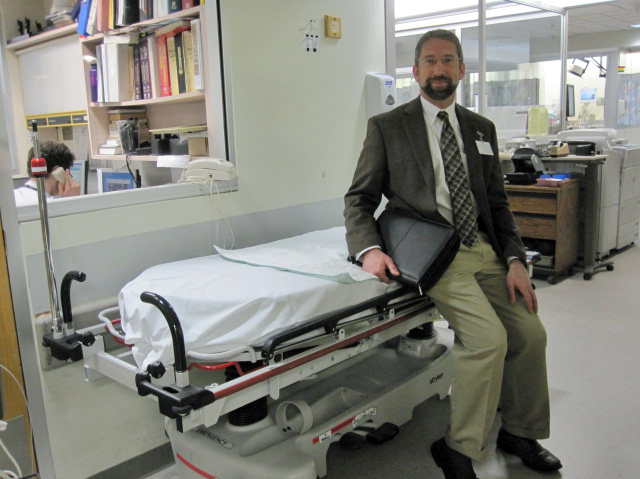 "The inside of the ER is kind of like Las Vegas," with a "24/7, 365 flow of activity," says Dr. Gary Bubly, an emergency physician at The Miriam Hospital in Providence, R.I.

As he lay on a gurney in the emergency department of Memorial Hospital of Rhode Island, Erik grew increasingly upset. He had called the police to report a theft from his apartment, but wound up being taken to the hospital.

The ER staff quickly determined that Erik, 40, who has been diagnosed with schizoaffective disorder and PTSD, needed urgent psychiatric care, but there wasn't much they could do.

Like many hospitals, Memorial doesn't have a psychiatric unit, and all of the psychiatric units in the nearby facilities were full. Erik, a bright, articulate and devoutly religious man, had to wait nearly two days on a gurney in the ER before he could be transferred.

Mentally ill patients often languish in hospital emergency rooms for several days, sometimes longer, before they can be moved to a psychiatric unit or hospital. At most, they get drugs but little counseling, and the environment is often harsh.

"The inside of the ER is kind of like Las Vegas," with a "24/7, 365 flow of activity," says Dr. Gary Bubly, an emergency physician at the nearby Miriam Hospital and president of the Rhode Island Medical Society. While the ER staff does its best to care for mentally ill patients, he says, it's the wrong place for someone in the midst of a psychiatric crisis.

Emergency rooms are for people with heart attacks and gunshot wounds, and it is just a disgrace that mentally ill people can be held two, three, five days, eating ham sandwiches in total chaos.

Seventy percent of emergency department administrators report that they hold mentally ill patients for 24 hours or longer, according to a 2010 survey by the Schumacher Group, a Louisiana firm that manages emergency departments across the country. Ten percent said they had boarded some patients for a week or more. Most administrators said delays compromise patient care in the ER, increasing waiting times for all patients and overcrowding.

The problem has worsened during the economic downturn. Since 2009, 32 states have cut their mental health budgets, largely from outpatient services that keep people healthy and out of the ER, according to a study by the National Alliance on Mental Illness, a patient advocacy group. And since 2010, states have closed or are planning to close nearly 4,000 state psychiatric beds, about 8 percent of capacity, according to the National Association of State Mental Health Program Directors Research Institute.

"We're not cutting fat anymore," says Charles Ingoglia, vice president of public policy at the National Council for Community Behavioral Healthcare, a membership organization for mental health organizations that treat the uninsured and underinsured. "We're at the bone. All of the easy cuts have already been made over the years."

At the same time, many Americans have lost their jobs and health insurance and are leaning on the state programs that are being cut. The need for such services has also grown as depression and anxiety have increased: A 2009 survey by the U.S. Substance Abuse and Mental Health Services Administration found that mental illness is more prevalent among unemployed adults. Many wait until their illness reaches a breaking point and then seek care at the ER.

Over the past few years, Erik says he has been stuck in the ER several times for anxiety and psychosis. He describes himself as a musician, and with his shoulder-length brown hair, mustache and goatee, he looks the part. He has health insurance through both Medicare and Medicaid and lives off of the monthly disability payments he receives from Social Security. He asked that his last name not be published for fear of being stigmatized.

When he arrived at Memorial, nurses asked Erik to remove his clothing and put on a hospital gown; he refused, saying it violated his religious beliefs. According to hospital records, he threatened to punch a nurse who tried to get him to comply, and was bound by his wrists and ankles.

"I feel like a mute prisoner with no rights," he says of his experience in the emergency room. "It's pushing my tolerance and self-control thresholds to the maximum." A security guard sat by him, making sure he didn't try to hurt himself or leave the hospital. Even his visits to the bathroom were supervised.

Memorial Hospital wouldn't allow a reporter to visit the ER. But Miriam's emergency room regularly faces the same problem of psychiatric patients waiting a long time before they are transferred. The unit is divided into small patient quarters, each cordoned off with a pastel floral curtain that ends about two feet above the floor, providing no sound barrier for the chaos occurring just outside.

One recent Monday afternoon, more than 40 doctors and nurses were rushing back and forth with clipboards and stethoscopes, rolling patients on gurneys and tending to those parked in the narrow hallways. Phones were ringing off the hook, the loudspeaker was barking with pages for physicians, and medical monitors were beeping incessantly. There was no natural light — only the yellow glow of fluorescent lights overhead.

Two psychiatric patients were waiting for a bed. One had been there for 30 hours, the other for just a few. They were monitored day and night by a security guard sitting outside their curtained areas, slowing down the flow of traffic in the ER. For every hour that a mentally ill person is stuck there, another patient cannot get in. On this particular day, six people were waiting in the triage unit, and if not for the two psychiatric patients awaiting placement, Bubly says, they might otherwise have been seen already.

Bubly is frustrated with the situation, which he describes as "the thing that is most wrong with the health care system that I see on a daily basis." The long wait times for mentally ill patients would not be tolerated for any other illness, he says. "If somebody had pneumonia and they were admitted, they wouldn't be told they have to wait anywhere." 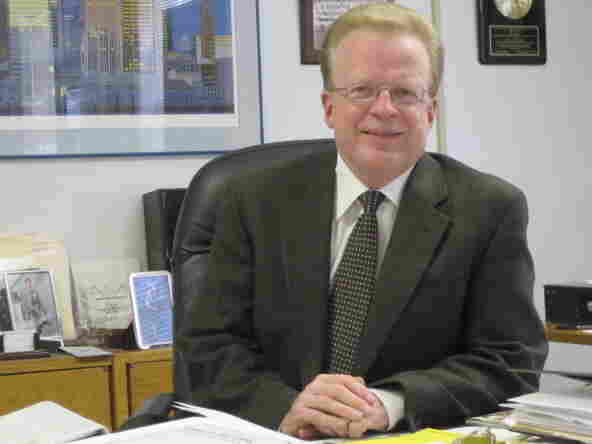 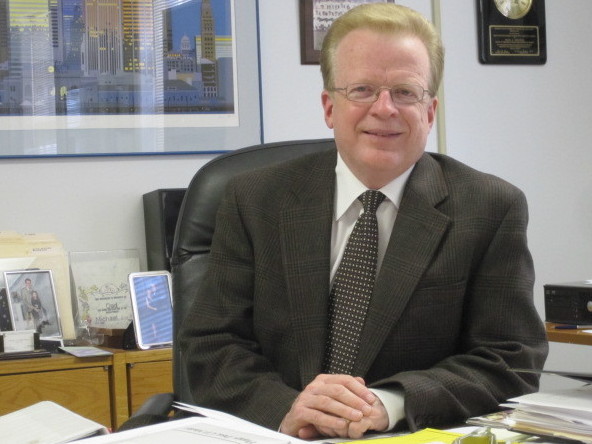 Unlike many other states, Rhode Island is actively trying to solve the growing problem. Between 2005 and 2009, psychiatric visits to the emergency department in the state increased by nearly 27 percent.

Since 2008, Craig Stenning, head of the state's mental health department, has been working with hospitals to communicate about where patients are waiting and where beds might be available. Each day around 2 p.m., his office puts out a list tracking mentally ill patients who are waiting for beds across the state. In the next six months, he hopes to begin an online program that allows hospitals to see the data in real time.

Stenning also added 49 beds in nonhospital settings to help ease the burden on emergency rooms. Butler Hospital, the largest psychiatric hospital in the state, has received permission to add 26 beds in the next year.

Despite his efforts, some patients are still waiting a long time. H. Reed Cosper, the state's mental health advocate, a lawyer appointed by the governor to defend and advance the rights of the mentally ill, recently received a complaint from a man whose 60-year-old mother waited for seven days before being transferred to a psychiatric hospital.

"Emergency rooms are for people with heart attacks and gunshot wounds, and it is just a disgrace that mentally ill people can be held two, three, five days, eating ham sandwiches in total chaos," he says.

Cosper has been on the case for 20 years. While waiting times have gotten better, he says, letting patients languish in ERs is illegal in Rhode Island.

Emergency departments, Cosper argues, fail to provide the basic rights guaranteed to psychiatric patients under Rhode Island's mental health law, including the right to privacy and dignity, to wear one's own clothes and to be given reasonable access to telephones to make and receive confidential calls.

Tranquility At The Psychiatric Hospital

Forty-two hours after being brought by ambulance to Memorial Hospital, Erik was finally transferred to Butler Hospital. It's a sprawling brick building from the 19th century, with tall turrets and a glass gazebo out front, built on a 110-acre campus of conifers and deciduous trees looking out over the Seekonk River.

The hallways are a tranquil gray, and several paintings hang in the stairwells. Erik is wearing his own blue plaid flannel shirt and khakis, and his hair and mustache are carefully combed. At Butler, he explains, he feels safe and comfortable. He's allowed "to take a shower and use the facilities without someone watching me or insisting that the door be open. I think that's a minimal level of humanity that should be accorded to a human being."

Not all psychiatric hospitals are as picturesque as Butler, and many present their own share of problems. But at least they were designed for patients like Erik, who spent seven days there before he was allowed to return home.

Today, he is scared that, before long, he'll end up stuck in an ER again.