Accessibility links
Gas Prices Force Consumers To Make Choices In some parts of the country, the price at the gasoline pump has hit $4 a gallon. It's steep enough that it's changing consumers' buying habits. Economists are trying to figure out how much rising gas prices will hurt consumer confidence and consumer spending.

In some parts of the country, gasoline prices have hit $4 a gallon. The U.S. Energy Department estimates gas prices nationally will average $3.86 per gallon through the summer. That's a big increase — up nearly 40 percent compared with last year. So what does that mean for the economy?

Economists are trying to figure out how much rising gasoline prices will hurt consumer confidence and consumer spending. 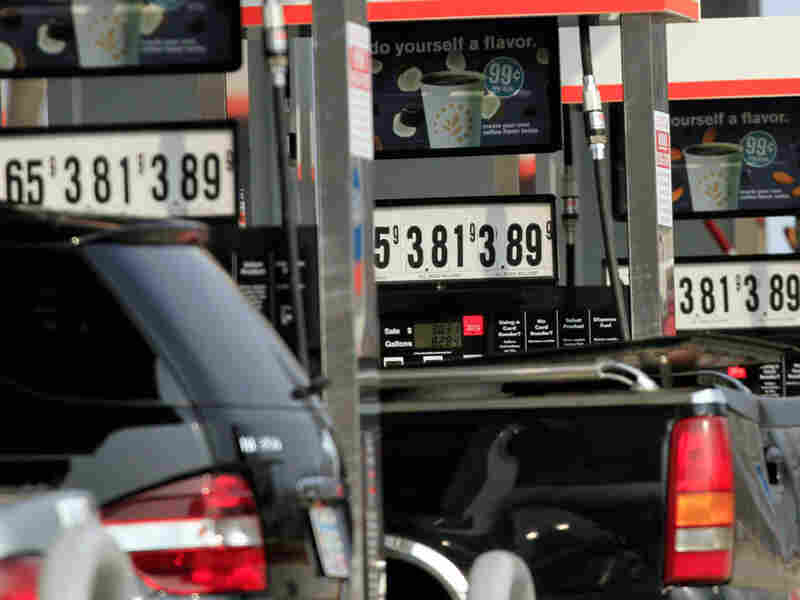 "It's not good for the people; this is very bad," customer Omery Velagoshti says while filling up his tank.

Velagoshti, who works delivering food for his son's family restaurant, says he has been making some changes in response to the rising gas prices.

"I go for shopping or just for coffee less than before," Velagoshti says. He wants to save money to make up for the extra money he's spending on gas.

At the next pump, Nancy Morales and her husband, Luis, are putting $50 in their old Jeep Cherokee. Their son is in the back seat.

"Every weekend is like, nope, money for gas not personal items," Nancy says.

The family runs a small house-cleaning business, and they've been cutting back a bit, too.

"We wanted to go to Bonkers [Funhouse Pizza] this weekend, and we have to [decide between] Bonkers and the price of gas," she says.

To save money, they decided not to eat at Bonkers, where their son likes to play video games.

Blowing a little less money on pizza and video games probably won't drag down the whole economy, but if hundreds of millions of people start cutting back in significant ways, that could add up to big problems.

"Whenever we pay more for gas, dollars leave this country to pay for imported oil," says Peter Morici, an economist at the University of Maryland. "That's money that could be spent on U.S. products, and in turn, it slows demand, slows growth and slows jobs creation."

The economy has been doing better recently, and the unemployment picture is improving. But Morici says rising gas prices will slow that growth and might even stop it.

"I can't predict recessions better than anyone else," Morici says. "But I do know that rising gasoline prices in a country that imports 10 million barrels a day is very detrimental to economic growth and can seriously threaten the recovery."

Others are much less concerned, including Nariman Behravesh, chief economist at the forecasting firm IHS. "The increase in gasoline prices, even to above $4 a gallon, is not a huge deal," he says. "Clearly it is squeezing some households, especially lower-income households. But it's very different from what happened back in 2008."

Back then, gas prices also hit $4 a gallon. But at the same time, the country was sliding into a historic financial crisis. The Federal Reserve says the economic recovery is "on firmer footing."

Behravesh says most Americans really don't spend that much money on gas. "Average households spend about 5 percent of their after-tax income on gasoline. That has risen a little bit from about 2 percent a couple of years ago, when oil prices and gasoline prices collapsed. So it is higher, but it's not a killer," he says. "This is not something that's going to kill this recovery."

Behravesh says everyone is very aware of gasoline prices; consumers have to stand there at the pump, watching the cost tick up slowly as their gas tanks fill and their wallets empty.

It's the same for some visible food items: Prices are up for milk and beef. But overall, Behravesh says, inflation has been very mild for all kinds of other things: flat panel TVs, refrigerators and haircuts.