Accessibility links
'The Bippolo Seed': The 'Lost' Dr. Seuss Stories This fall, Random House will publish a collection of Dr. Seuss stories that were previously known only to Seuss scholars and collectors. Lynn Neary reports on the origins of The Bippolo Seed. 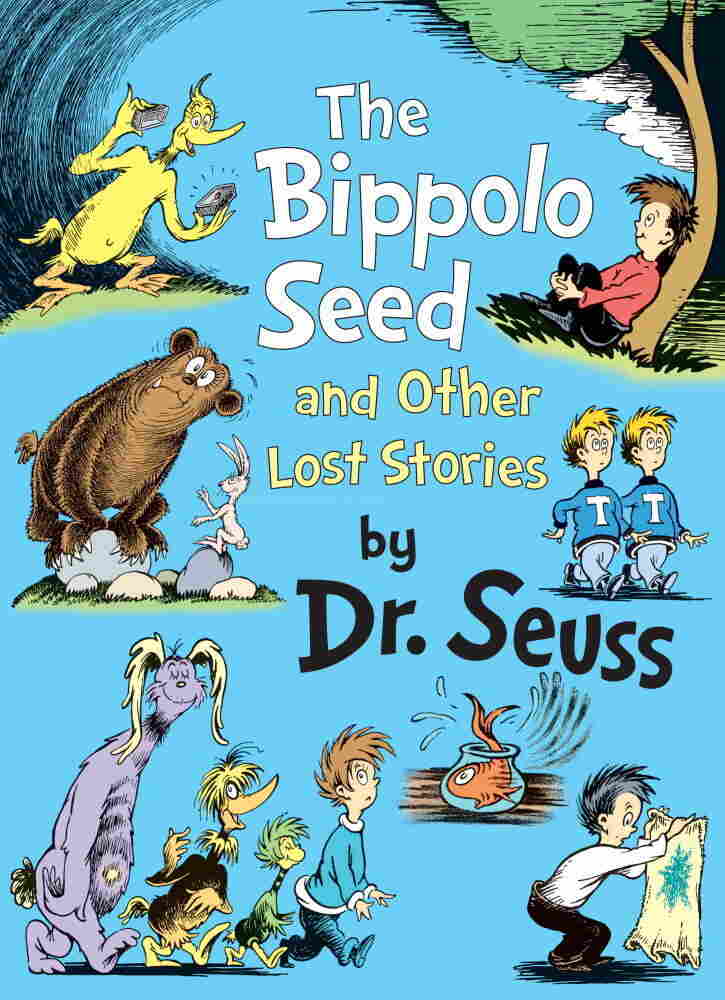 Every now and then a treasure-trove of seemingly "lost" literature is discovered. The latest such find is a collection of stories by Theodor Geisel, better known as Dr. Seuss. Seuss scholars and collectors have known about these stories for a while, but fans will have the chance to read them in a new book to be released by Random House next fall.

To start with, however — were these stories ever really lost? Random House children's book publisher Kate Klimo says no. "Nothing is really ever lost in this day and age."

Maybe "scattered" would be a better way to describe it. These are not half-written stories found in a dusty attic after the death of the author. These are stories that have already been published. Dr. Charles Cohen, a Massachusetts dentist with a passion for all things Dr. Seuss, simply managed to collect them all in one place.

"They came out in the '50s in magazines," Cohen explains. "And then when the next month's magazine would come in, people would throw away the old one. And those stories were forgotten. And literally it's been 60 years for some of these stories and very few people have seen them."

While doing research on the children's book author, Cohen began tracking down original copies of the stories. But he needed a way to support his habit.

"I would find some of these magazines that these appeared in and I would purchase them on eBay for $2 or $5 from people who didn't know they had these Dr. Seuss stories in them," he says. "And then I would list them on eBay and explain what they were. So a $5 magazine would bring in $200 or $400, and that was a great markup for me." 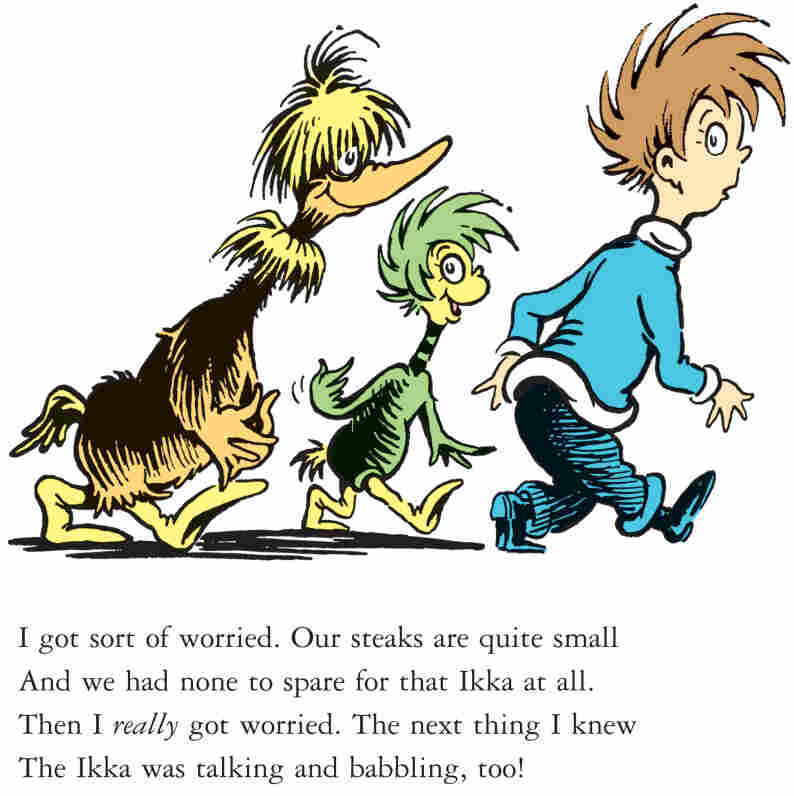 In this illustration from a story called "Steak for Supper," a crew of creatures follow a boy home in hopes of getting a steak dinner. The story is one of seven rediscovered Dr. Seuss shorts from The Bippolo Seed. Courtesy Random House hide caption 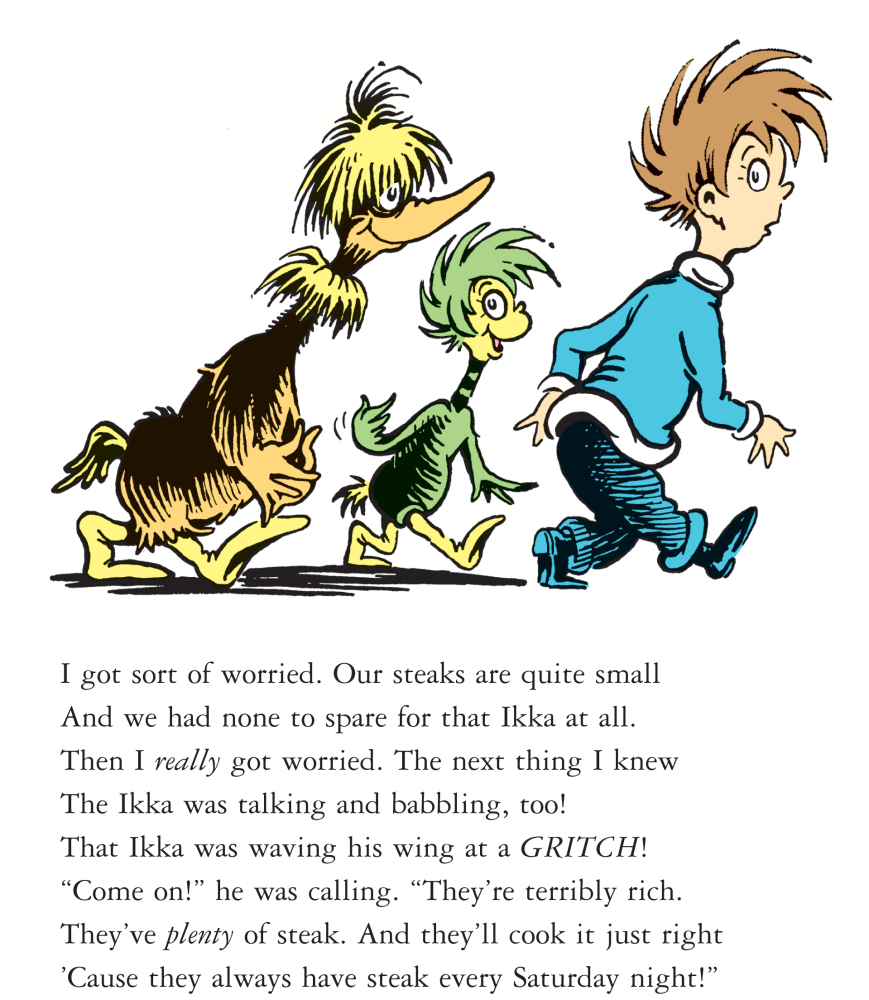 In this illustration from a story called "Steak for Supper," a crew of creatures follow a boy home in hopes of getting a steak dinner. The story is one of seven rediscovered Dr. Seuss shorts from The Bippolo Seed.

A Random House art director who worked on the Dr. Seuss books saw some of these items for sale on eBay, and began wondering about them. Klimo says they decided to look up this Dr. Seuss-obsessed dentist in Massachusetts.

"We took a field trip up there to his house and discovered that he not only had magazines, but he had beer trays, and stuffed animals and figurines and all kinds of stuff and his knowledge about it was encyclopedic," she says.

Random House then commissioned Cohen to write his own book about Dr. Seuss, and that sidetracked them from publishing the stories ... until now. 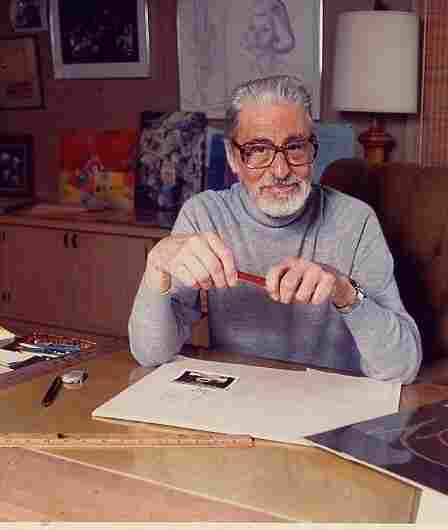 Theodor Seuss Geisel (1904-1991) first began using his pen name after a college dean banned him from drawing cartoons for the school paper. He is the author of The Cat in the Hat, Green Eggs and Ham, How the Grinch Stole Christmas and many other beloved titles. Courtesy Dr. Seuss Enterprises, LP hide caption

"Even the slight stories are interesting. ... It's like finding a bunch of lost one-act plays of Shakespeare. They may be minor works but they are the minor works of a genius so they are still interesting," he says.

In these stories, says Nel, you see themes and character traits that will become more fully realized in later works. And, he says, you can hear the unmistakable rhymes that are so characteristic of the best-known Dr. Seuss books.

Cohen says that he is thrilled that these stories will finally be available to the public and that he has only one regret.

"The one thing that was disappointing is to have read all of these stories, and to have discovered that these are as good as the things that people already know about, " he says. "But then thinking, have I done it all, am I not going to be able to find any new Seuss stories."

If they're out there, however, chances are, Cohen will find them. 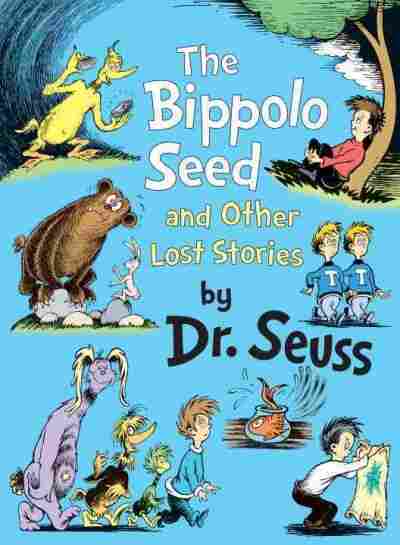 The Bippolo Seed and Other Lost Stories