Accessibility links
Mexicans Look For Missing After Mass Graves Found At least 116 bodies have been discovered in mass graves over the last week in San Fernando, in the northern Mexican state of Tamaulipas. Hundreds of people have come to check if a missing relative or friend is among the dead. The local Catholic bishop says gangs are terrorizing the area. 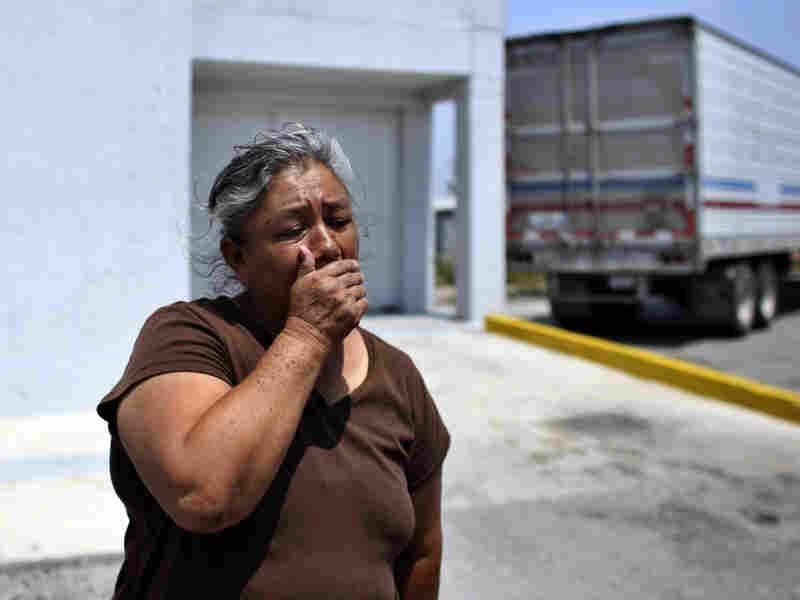 Juana Sanchez, 57, waits for news about her 38-year-old son, who has been missing since May 2010, in front of the morgue in Matamoros, in the northern Mexican state of Tamaulipas, on Friday. Alexandre Meneghini/AP hide caption 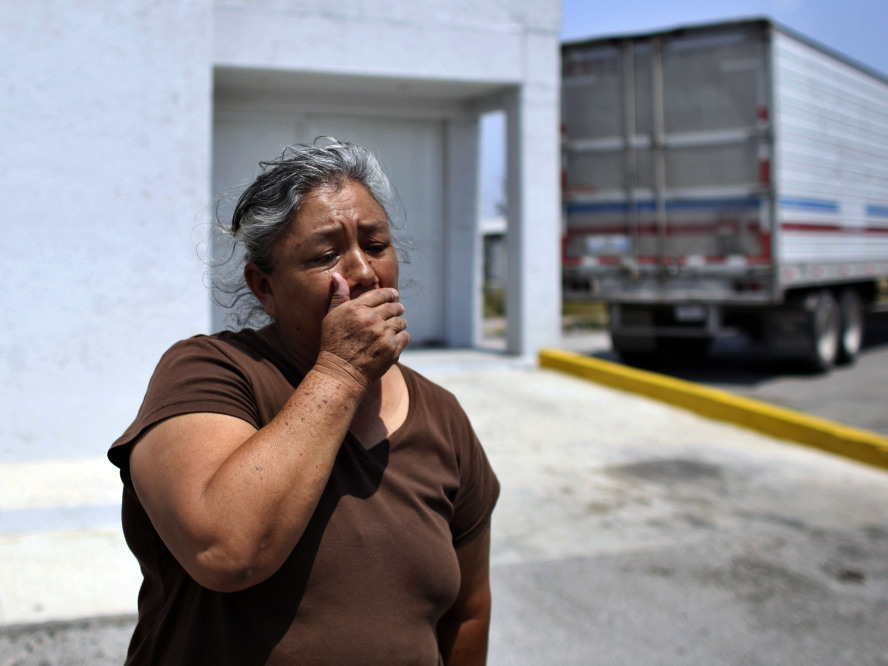 Juana Sanchez, 57, waits for news about her 38-year-old son, who has been missing since May 2010, in front of the morgue in Matamoros, in the northern Mexican state of Tamaulipas, on Friday.

Mexican President Felipe Calderon's administration is vowing to bring the full weight of the government to bear on killers who have been operating in the northern state of Tamaulipas.

The declaration comes after at least 116 bodies were discovered in mass graves over the last week in the town of San Fernando. It's the same town where 72 migrants were found assassinated last August.

Investigators say the latest victims are mainly Mexicans who may have been kidnapped recently in the area.

At the morgue in Matamoros, mostly it's mothers who come searching for their missing sons.

Maria Barrera Zapato says Thursday will mark one month since her son, Ramon, disappeared. Barrera says the 29-year-old left his house in the middle of the day to walk to the store. No one has heard from him since. Barrera says each moment of her day is painful.

"Hour by hour, minute by minute, you're thinking about what's happening," she says. "If you're eating or sleeping, everything, everything's an agony."

Since the mass graves were discovered in San Fernando last week, hundreds of people from all over Mexico have come here to check if their missing relative or friend is among the dead. The bodies are stored in a battered refrigerated truck that's backed up to the morgue entrance.

Local officials have set up tents in front of the building to shelter people from the sun. Barrera says she just wants to know what's happened to her son.

She says she hopes he's still alive, but if he's not, she would like to find his body.

The Catholic bishop of Matamoros, Faustino Armendariz, said Wednesday that this part of Mexico is being terrorized by criminal gangs.

The bishop says even he has been stopped and detained by the criminals who set up checkpoints on the local roadways.

"We always go out with Jesus in our mouth," Armendariz says, "and we put ourselves in the hands of God."

Bus lines have stopped running through the rural section of Tamaulipas where the scores of corpses were just found. Some residents at the border say Matamoros is now an island, cut off from the rest of Mexico, because people are afraid to drive on the highways.

Armendariz says even priests are afraid of driving around Tamaulipas.

He says the Catholic Church's activities in Tamaulipas have been disrupted by the violence, but the church continues to hold Mass in remote parts of the state.

The Mexican government says federal police and soldiers are going to boost their presence in Tamaulipas and will patrol the state's highways.

Federal authorities have arrested 17 suspects in connection with the mass graves. Calderon, in denouncing this latest massacre, said one of the suspects confessed to killing 200 people.

Mexico's top prosecutor says the mass graves are linked to the Zetas drug cartel. It's unclear, however, whether the victims were killed because they refused to work for the cartel, didn't pay ransoms or for some other reason.

Back at the morgue, Maria Guadalupe just submitted samples for a DNA test to see if any of the remains — some of which are badly decomposed — are those of her 33-year-old son, Jose Alberto.

He's been missing for seven months and 16 days, she says.

A lot of young men have gone missing recently, Guadalupe says. It's a wave of disappearances right now.

She says she rang her son's cell phone over and over again but no one ever answered. So now she's looking for him here.