Accessibility links
Public Employees Feel The Heat In The Sunshine State As in Wisconsin, Ohio and other states, Florida's public employees and their unions are on the defensive. Gov. Rick Scott's proposed budget cuts thousands of public jobs and requires workers to contribute part of their salaries to their pensions. Plus, the Republican-controlled Legislature is close to adopting a measure that directly targets public employee unions.

Listen
Public Employees Feel The Heat In The Sunshine State 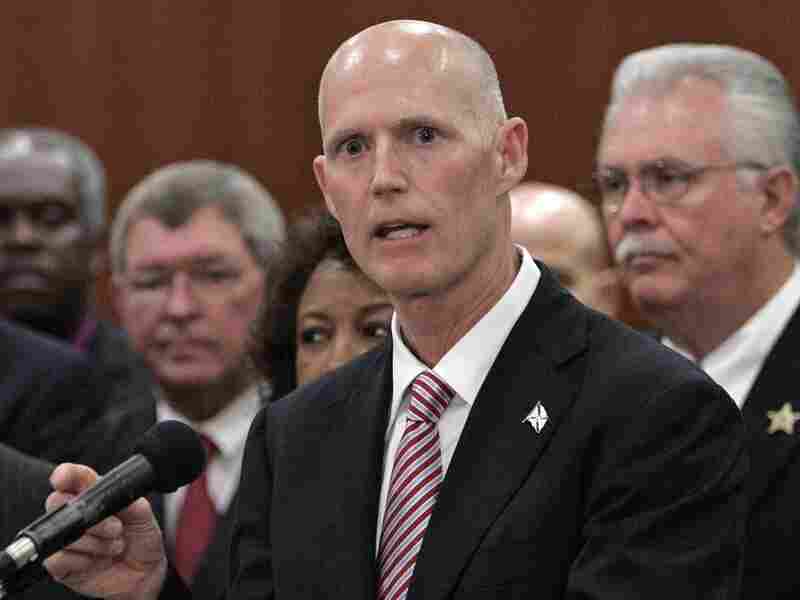 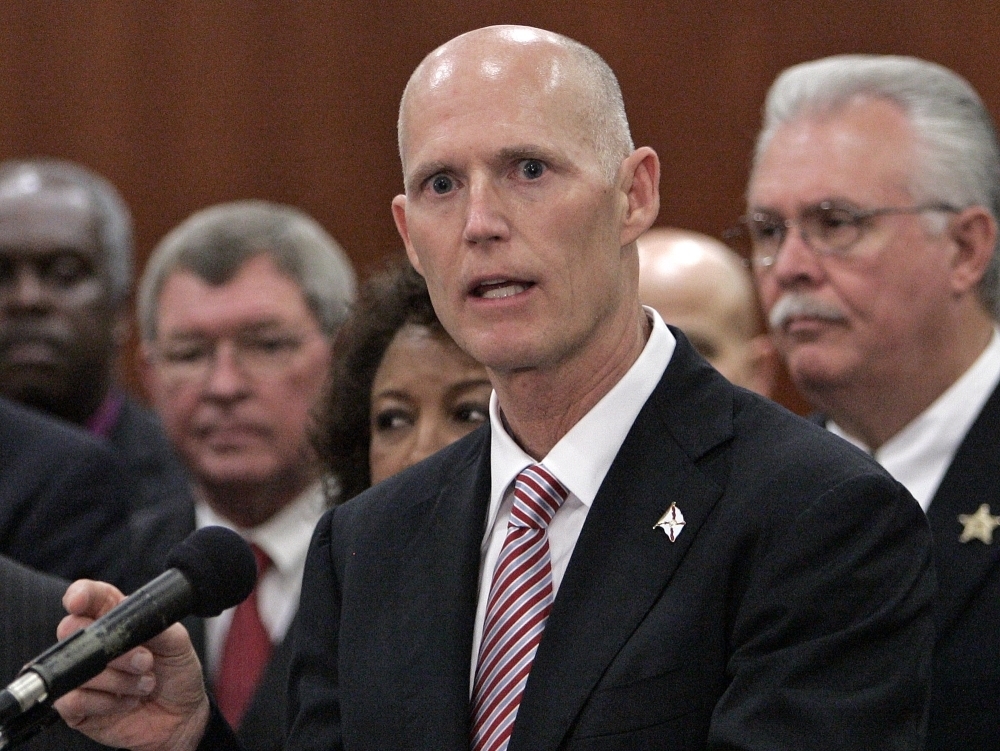 As in Wisconsin, Ohio and other states, Florida's public employees and their unions are on the defensive.

Republican Gov. Rick Scott has proposed a budget that cuts thousands of public jobs and requires workers to contribute part of their salaries to their pensions.

Plus, the Republican-controlled Legislature is close to adopting a measure that directly targets public employee unions.

In Tallahassee, it's a familiar site at the Capitol — a noontime rally under the rotunda held by members of the state's public employee unions. This event is billed as a performance evaluation of Scott's first 100 days in office.

Barbara Welmuth, a teacher and union member from the Tampa area, rates the governor's job performance as "unsatisfactory."

"As the CEO of Florida, Governor, I ask you to keep your promise — to fully fund public education and to change your position on taxing the teachers, firefighters and police officers of this state," Welmuth says.

Scott, a former hospital CEO, campaigned on the promise that he would run Florida like a business. One of his first proposals was to make big changes to the state pension system. He also wants to require public workers to contribute part of their salaries toward their pensions.

For workers, it amounts to a pay cut — somewhere between 3 and 5 percent a year. The unions call it a tax.

"We should have done this before," Scott says. "We don't have a plan that's fully funded. We're the only state where state employees are not participating. So, we've got to do something that the employees know that they have a plan and something that's fair to taxpayers."

As state pension plans go, fiscally speaking, Florida is in relatively good shape. But in a state with a $4 billion budget deficit, the Legislature has embraced the idea because of its savings — estimated at about $1 billion.

But for state, county and local employees in Florida, the pension changes were just the beginning. The governor has pledged to pare state worker rolls by 5,000 jobs and has proposed steep cuts in education spending.

"There may be tens of thousands of layoffs from schoolteachers and school employees," says Doug Martin, a lobbyist who represents many state workers. "So this is an extremely difficult environment."

Florida's governor and Legislature are also moving toward privatizing some prisons, public hospitals and health services. If those plans go forward, they would move thousands of state workers into the private sector and likely make big changes to their pay and benefits.

Members of public employee unions in Florida feel they've become targets. And they're right, according to Juan Gonzales, a lobbyist with Associated Industries of Florida, a powerful business group in Tallahassee.

He traces the rancor back to an education bill passed last session by the Legislature. After many rallies and much lobbying, teachers convinced then-Gov. Charlie Crist to veto it.

"The union was very successful," Gonzales says. "They showed their strength and power last session. And so, I think members of the Republican leadership thought, 'Hey, these guys really came to bat, so let's put them on the defensive.' "

Others in Tallahassee call it payback. If so, it's not confined to Florida. It's happening in other states, too.

One example is a bill that would ban public unions in Florida from collecting dues from members through paycheck deductions. Similar Legislation has been introduced in other states, including California and Alabama.

Florida state Sen. John Thrasher says his bill is not about payback or a national anti-labor agenda.

"It's about what I campaigned on in my district, and that's limited government," Thrasher says. "Government simply ought not to be in the business of being the tax collector for people who are involved in political processes."

That view was not shared by more than 100 members of public employee unions, who packed a hearing room in Tallahassee on Wednesday.

"It's to gag the voice of the working people of Florida," says Steve Sarnoff, who works in the city of Clearwater's solid waste department. That's what this is about, pure and simple."

Despite the strong union opposition, the dues deduction ban was passed by a Senate committee and seems likely to become law between now and the beginning of May, when the legislative session comes to a close.

Rich Templin, the head of Florida's AFL-CIO, concedes that the best he can hope for this session is to limit the damage and look to the future.

"I don't think that anyone is looking at this session in isolation," Templin says. "May is not the end; May is just the beginning. And folks need to get mobilized and ready to make a change in government in November."

That's November 2012. For members of Florida public employee unions looking at pay cuts and layoffs, that's a long way off.