Accessibility links
Rebel Leader Recounts Daring Trip To 'Courageous' Misrata Ali Tarhouni, the Libyan rebels' finance and oil minister, visited the city under siege by leader Moammar Gadhafi's forces. He brought money and a message: that the people haven't been forgotten. "I went there to boost their morale — the fact of the matter [is] they boosted my morale," he says. 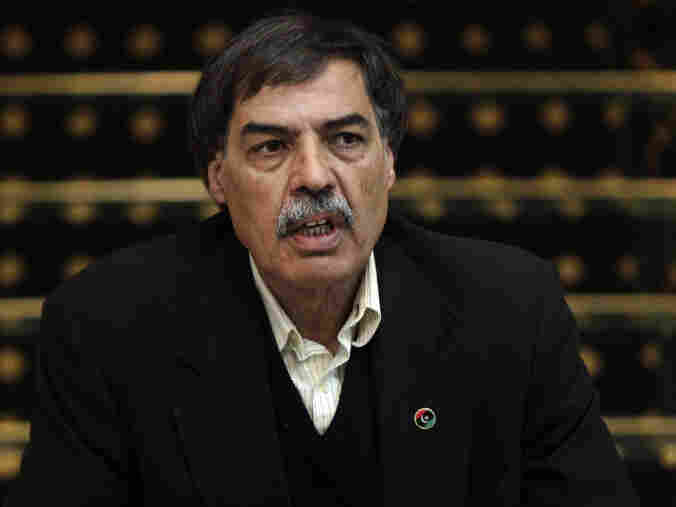 Ali Tarhouni, who is finance and oil minister for the Libyan opposition's National Transitional Council, speaks to the media in Benghazi on April 1. Tarhouni spoke to NPR on Thursday about his daring clandestine trip to bring money and moral support to the besieged city of Misrata. Ben Curtis/AP hide caption 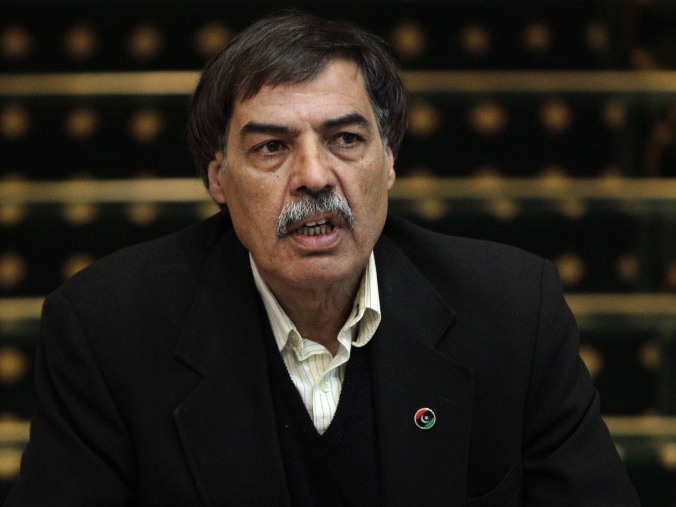 Ali Tarhouni, who is finance and oil minister for the Libyan opposition's National Transitional Council, speaks to the media in Benghazi on April 1. Tarhouni spoke to NPR on Thursday about his daring clandestine trip to bring money and moral support to the besieged city of Misrata.

Ali Tarhouni shocked his University of Washington students when he abruptly left his faculty job to try to help wrest Libya from leader Moammar Gadhafi's 42-year grip on power.

Then, Tarhouni, who became the opposition's finance and oil minister, startled even his rebel colleagues by getting on a fishing boat last week and sneaking into Misrata — a western city under siege by Gadhafi's forces.

It wasn't the usual workday for a de facto Cabinet minister, even in these extraordinary times. Tarhouni spoke to NPR on Thursday about his daring clandestine trip to bring money and moral support to the place he calls Libya's "small Leningrad."

Tarhouni knew rebel leaders would be extremely worried about losing their finance and oil minister in a single blow — as he holds both jobs — so he didn't tell them what he was up to.

"It was really a risky trip, and their fear was that if I am captured [by] Gadhafi, that's a trophy for him," Tarhouni says. "So in terms of the logic, I think they're right, but I'm not sure in these times logic should prevail all the time."

He arrived carrying badly needed money for salaries and, perhaps more important, the message that the people of Misrata had not been forgotten.

NATO Struggles With Course Of Action In Libya

Libya: How The U.S. Can Avoid Another Quagmire

What Tarhouni wasn't prepared for were the scenes of devastation and the daily acts of bravery that have helped the last major rebel holdout in western Libya endure Gadhafi's barrage.

"I went there to boost their morale — the fact of the matter [is] they boosted my morale," he says. "It's a very courageous city."

Some residents who have escaped on aid ships have described the scene: Much of Misrata is under the control of Gadhafi's forces, with the lightly armed rebels clustered in the city center. For weeks, the government has pounded away, with snipers firing seemingly at random and tank shells and Grad rockets dropping almost daily.

The rebels have called urgently for more NATO airstrikes as the shelling continues.

Tarhouni says his hosts moved him around to avoid capture, at great cost to their own safety — a cost some paid in full measure.

"The place that we stayed in, I just found out the day that we left, was completely destroyed, and the guy who served us coffee died," Tarhouni says. "I saw orphans there — 1 year old, 2 years old — in the hospital. The hospital itself was so full that the doctors literally have no place to sleep, even in the hallway, so they have a small tent outside the hospital and that's where they sleep."

Some analysts say, by rights, Misrata should have fallen by now. But Tarhouni says, having seen it, he still has hope.

"No doubt. And the people of Misrata understand the significance of Misrata, that this is the unification between the east and the west — it's very clear in their mind," he says. "I'm so proud of them. And you know, they're paying a heavy price every day and willing to do it."

The International Organization for Migration says another rescue ship is making its way to Misrata, but it can carry only a fraction of the thousands still waiting to get out.