Accessibility links
Selective Abortions Blamed For Girl Shortage In India In India, there are far fewer girls born each year than boys. Activists say the disparity is deliberate: Some families are using ultrasound technology to determine the gender of fetuses and then aborting the females. Now it's becoming difficult for young men to find young women to marry. 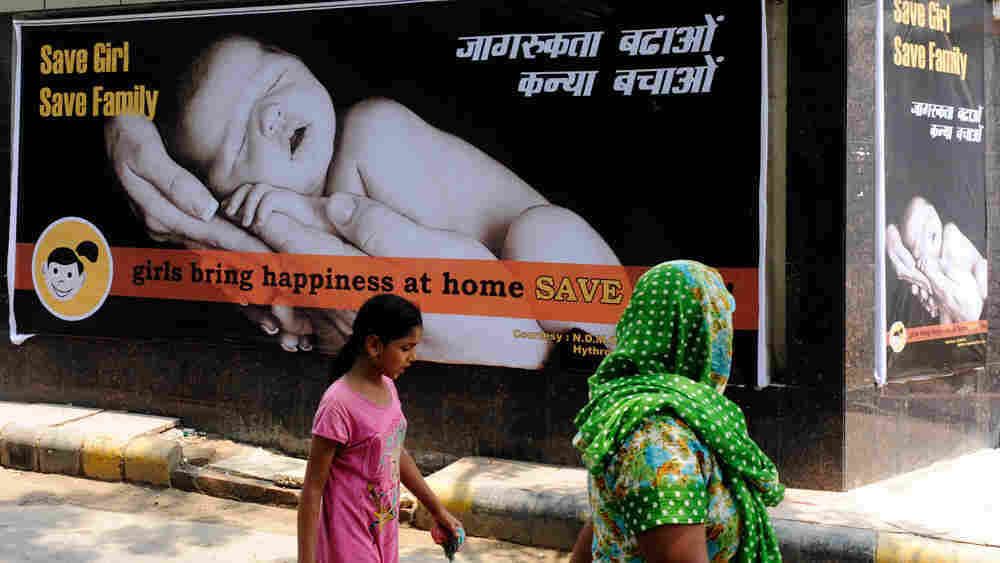 A woman and child walk past a billboard that promotes having girls last July. In India, there are far fewer girls born each year than boys. Some families use ultrasound technology to determine the gender of fetuses and then abort the females. Raveendran/AFP/Getty Images hide caption

Activists say the disparity is deliberate.

Much of Indian culture regards boys as assets to families and girls as liabilities. Some families are using ultrasound technology to determine the gender of fetuses and then aborting the females.

The process has been going on for decades, leading to a shortage of marriageable girls that is beginning to make itself felt all over India.

Chandramouli says this is a continuation of a trend that was first seen clearly in the 2000 census — but the new figures show the problem is spreading. 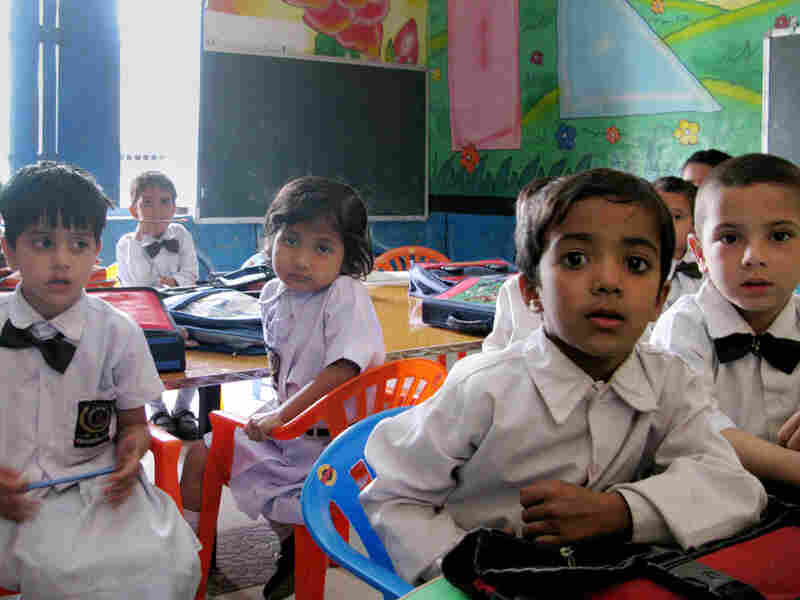 Only about 30 percent of the students at Sarvodya School are girls. The school is in the Jhajjar district of Haryana state, which has the lowest ratio of girls to boys under the age of 6 (774 to 1,000) in India. Courtesy of Diana Derby hide caption

"It has to be said that what was predominantly a North Indian phenomena of a few states has now spread across the country, and we see a uniform decline all over the country, so that is what is more distressing," he says.

"It's almost like first step toward eradication of humanity itself — because if there are no mothers, there'll be no children, and there is going to be nobody ever born," says Ranjana Kumari, head of the Centre for Social Research. The New Delhi-based aid organization focuses on empowering women.

Kumari says female feticide is becoming more common, despite the fact that Indian law makes it illegal to use ultrasound and other technologies to determine the gender of a fetus.

Why do families do it?

"The parents feel that the boy is a help for the future, where the girl is a liability," says Kailash Satyarthi, a founder of Global March, a group that focuses on human trafficking and child labor issues. "'If we spend money on her, then we have to spend money on her marriage, dowry probably, and then if something goes wrong, then we are always sufferers. So better that that girl is not born.'"

Notice that it's not just about the money, although a girl's family is expected to provide a big dowry payment to the groom's family before a marriage.

Another perception is that a girl is a potential source of dishonor to the family "if something goes wrong" — that is, if she is accused of sexual misbehavior or even if she is raped.

The district with the worst gender ratio in the entire country is Jhajjar, in the fertile farm country of Haryana state, not far from New Delhi.

The disparity is apparent at Sarvodya School, which serves about 2,200 students from throughout the district. Principal Punit Sharma says only about 30 percent of his students are girls.

He says some rural families are reluctant to educate their girls, but the disparity is mainly because of the low ratio of girls in the population.

"Primarily it is a male-dominated society. That's the main reason [for] not having girls as students," Sharma says.

He adds that it is now very difficult for young men in the district to find young women to marry.

Sharma says young women are brought to Haryana from other states for marriage, but that brings still more social problems.

Satyarthi of Global March says women from other Indian states are cut off from their families and often don't speak the local language or understand local customs. Sometimes, he says, the marriage is just a cover for sexual exploitation.

"That girl is used by other male folk in the families for sexual exploitation, so she is married to one man, but other brothers or relatives of that man use the girl for sexual purposes. And sometimes, one girl is married to several [men]," Satyarthi says.

Sharma, the school principal, says the men of his district, the fathers of families as well as the men who would like to become fathers, are aware of the problem but are only now beginning to confront it.

He says his school is teaching young men that the young women in their classrooms are their equals.

Kumari of the Centre for Social Research says the solution is a long-term one that involves better law enforcement, public awareness and the empowerment of Indian women.

A counselor from the organization, Rekha Dubey, carries that message to a meeting of women in Channan Hulla, a village on the outskirts of New Delhi.

She tells a group of about 40 women gathered in a house there that female feticide is a "sin," a message that resonates with her mostly Muslim listeners.

Several of the women speak up to say that even if they could afford to use costly technologies such as ultrasound, they wouldn't do it.

When Dubey calls for a show of hands of women who are willing to fight to end the practice of female feticide, most women raise their hands.

"I think the more women become aware of their rights, the more they become stronger in terms of their economic rights, political rights," Kumari says, "then sure that women will not go for such abortions, because to save the women species, women have to come forward."

And she adds, to save themselves, men will have to come forward as well.