Accessibility links
Movie Review - 'Rio' - A Chaotic Carnival, And Largely For The Birds The studio behind Ice Age and Robots stuck to formula with its latest kids' flick, a mild and predictable adventure about a pair of endangered macaws on the run in Brazil.

'Rio': A Chaotic Carnival, And Largely For The Birds

'Rio': A Chaotic Carnival, And Largely For The Birds 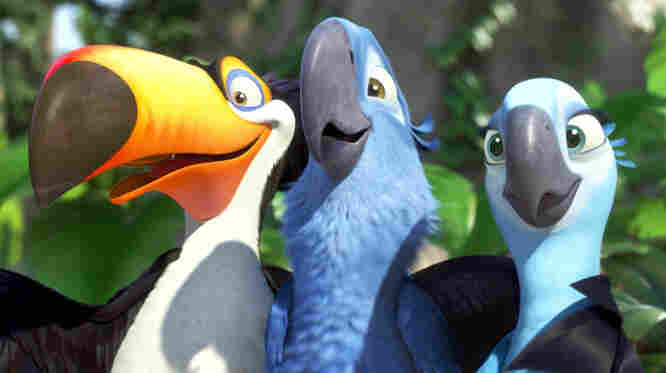 Birds In Paradise: A plan to mate Blu (Jesse Eisenberg, center) and Jewel (Anne Hathaway) runs aground after the endangered macaws are snatched by smugglers. On the run in Rio, they team up with a local toucan (George Lopez). Blue Sky Studios/20th Century Fox hide caption

'Do You Want Me To Call Your Mother?'

'Do You Want Me To Call Your Mother?'

'Tell Her How You Feel'

'Tell Her How You Feel'

It's a Pixar world. Every other animation studio is just living in it.

After years of fruitless attempts to grab a slice of market share from the Disney/Pixar and DreamWorks pie, Fox acquired the CGI-animation house Blue Sky Studios and enjoyed its first major hit with Ice Age — a bright, mild, agreeable comedy that functioned like methadone for those waiting for their next Pixar fix.

Through two Ice Age sequels, plus Robots and Horton Hears A Who! the formula hasn't changed: bright, mild, and agreeable, with a little bit of sass, a little bit of heart, and not much in the way of originality or inspiration. With the least successful of its movies still making over a quarter-billion dollars worldwide, Blue Sky has no impetus to change things up. It's already struck oil and seems content to stop digging.

Made strictly in that house style, Rio at least boasts a setting that complements Blue Sky's tendency to render its pictures in crisp, retina-searing colors: The jungles, mountains and beaches of Brazil pop with lush greens and radiant blues, and the film's tropical-bird heroes come together in such an array of beautiful patterns that the film dedicates two full musical numbers to their synchronized couplings. Not a second of it surprises, but at least those seconds pass appealingly, seizing on our primal attraction to vivid, shiny objects. There are times when watching it reduces you to an infant happily batting around on a play mat.

The plot of Rio, in contrast to the simple pleasures of the animation, is more needlessly convoluted than a '70s political conspiracy thriller. There are an ornithologist, a diabolical cockatoo, rom-com subplots for man and macaw alike, two different sets of bird smugglers, and some derring-do at Carnival that's as densely orchestrated as a stand-alone caper film.

At the center of all that hyperactivity is Blu, an endangered macaw who lands in small-town Minnesota following a botched hijacking from his birthplace in the Brazilian rain forest. Rescued by Linda — a sweet, bespectacled little girl voiced later in life by Leslie Mann — Blu grows so domesticated in the 15 years that follow that he never learns how to fly. Voiced by Jesse Eisenberg at his most affably neurotic, Blu seems content to perch himself on the counter of Linda's bookstore, sipping hot chocolate with just the right portion of tiny marshmallows. 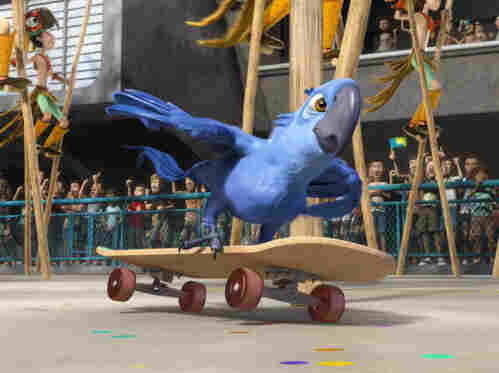 Raised as a pet and unable to fly, Blu is forced to look for alternative modes of travel as he tries to evade his captors and reunite with his human. Blue Sky Studios/20th Century Fox hide caption 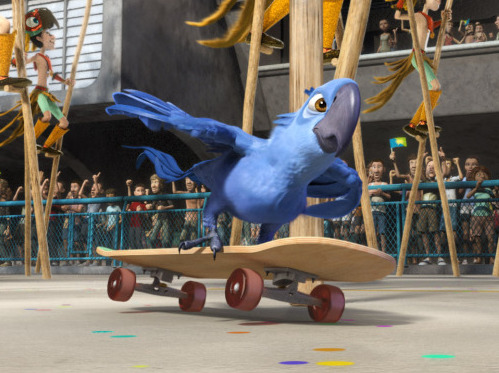 Raised as a pet and unable to fly, Blu is forced to look for alternative modes of travel as he tries to evade his captors and reunite with his human.

Enter the nerdy ornithologist Tulio (Rodrigo Santoro), who persuades Linda to ship her psittacine buddy back to Brazil for the betterment of his dwindling species. Tulio's plans to mate Blu with another rare macaw named Jewel (Anne Hathaway) are short-circuited when both birds are swiped by another group of smugglers, who chain them together like Gerard Butler and Jennifer Aniston in The Bounty Hunter. They manage to escape, but they're bound together: Jewel yearning to fly off to freedom, the flightless Blu keeping her pinned to the ground.

Rio adds a generous flock of wisecracking supporting species: George Lopez as the head of a family of toucans, Will.i.am as a red-crested cardinal, Jamie Foxx as a canary and Jermaine Clement as a cockatoo. Each of them is seemingly getting paid by the one-liner, but the busyness can only distract from the cliches at the film's center for so long. Stuck with each other, Blu and Jewel bicker so much that they're obviously stuck on each other — though Eisenberg and Hathaway sound far too adorable together to be forced to fight so much.

There's nothing egregiously wrong with Rio as a general-audience time-passer; it looks and sounds inviting, and the balance of jokes and sentiment seems about right.

It's just that it consistently takes the path of least resistance. Name the first things that come to anyone's mind about Rio de Janeiro — samba, soccer, sunbathing, Carnival — and those are the building blocks of this movie. Expect the expected.