Whatever Happened To The Anti-War Movement?

Whatever Happened To The Anti-War Movement? 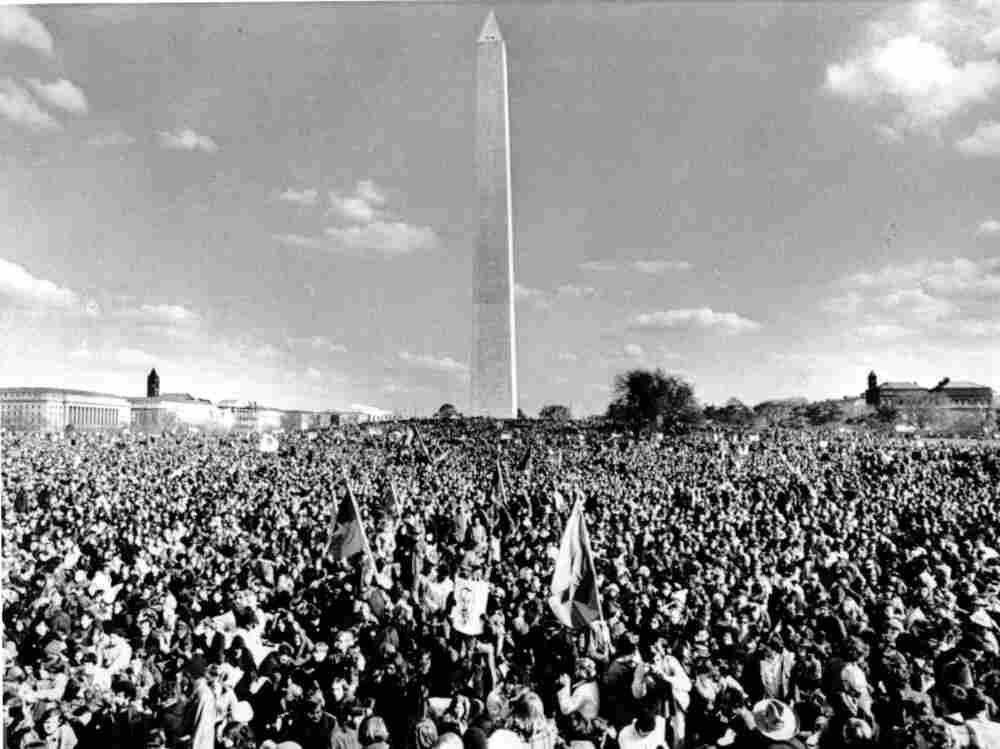 A crowd of demonstrators gather at the Washington Monument for a rally to protest the Vietnam War on Nov. 15, 1969. AP hide caption

The United States is knee-deep in at least three international military conflicts at the moment — in Afghanistan, Iraq and Libya.

American lives are being lost. Innocent civilians are being killed. Several of the engagements appear to be primed for protraction. The wars are expensive in other ways, too.

At least since the stormy 1960s, whenever America has gotten involved in deadly combat on foreign soil, large crowds of peace-promoting citizens have gathered in Washington and other cities to demonstrate against war.

It happened in 2007, when tens of thousands congregated on the National Mall and heard actors Sean Penn, Jane Fonda and Danny Glover speak out against President George W. Bush and the war in Iraq. It happened in 1991, when throngs rallied against U.S. involvement in the first Gulf War. And it has happened more than a dozen other times since the March on Washington for Peace in Vietnam in 1965.

Now, despite the U.S. military's concurrent and costly entanglements, the National Mall is quiet and the streets of Washington are pretty much protester-free.

The lack of noise and the apparent nonchalance raises the question: Where have all the protesters gone?

"I think a couple of things happened to the anti-war movement in the U.S.," says Celia Cook-Huffman, professor of conflict resolution at Juniata College in Huntingdon, Pa. "First, we did see it, alive and well, prior to the Iraq war. It had become an international movement that pulled together people from all over the world to try to stop the U.S."

But in recent years, she says, organizing a war protest has become more difficult. "The lack of a draft means that fewer people feel coerced into fighting," Cook-Huffman says, and "there is less a sense generally that people are being coerced to participate — even though in economic terms this may not be true. But I think it changes how people feel about soldiers and war."

She also believes the country is still stinging from the harsh way many Vietnam veterans were treated upon their return to civilian life. "People are more careful about doing anything that looks like it might be attacking soldiers," she says. "I think it makes it harder to organize a movement." 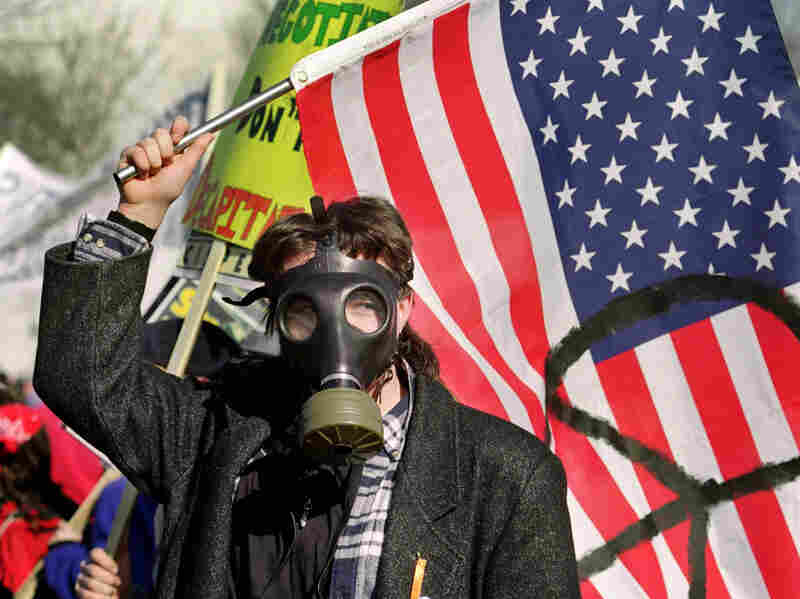 A demonstrator waves a flag marked with the peace symbol on Jan. 26, 1991, during an anti-Gulf War rally at the U.S. Capitol in Washington, D.C. Kevin Larkin/AFP/Getty Images hide caption 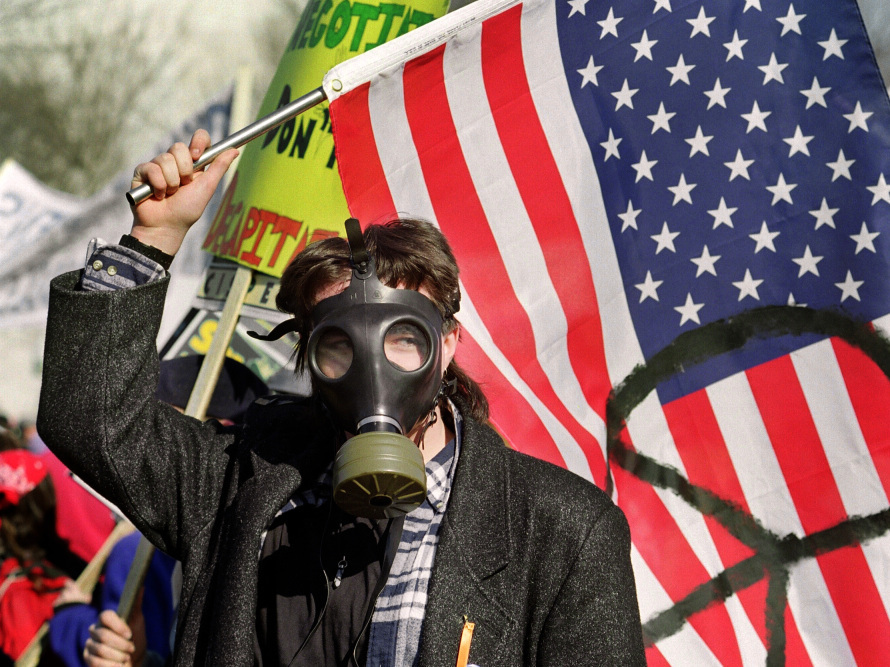 A demonstrator waves a flag marked with the peace symbol on Jan. 26, 1991, during an anti-Gulf War rally at the U.S. Capitol in Washington, D.C.

Since the 2001 attacks on the World Trade Center and the Pentagon, anti-war sentiment has been clouded by the "War on Terror," Cook-Huffman says, which makes the enemy "both very scary and very nebulous. So we can feel great that we aren't attacking innocent Afghans, only bad Afghans."

And, she adds, many Americans no longer feel the impact of the wars being fought. News from the frontlines is more tightly controlled by military officials than in the past. "The army has gotten much smarter about how it frames the story and filters information," she says, "so that the stories that outrage and require a moral response are harder to find."

Plus, military spending in the United States is big business, affecting many communities. According to Jo Comerford of the National Priorities Project, a Massachusetts-based federal-data research organization, the U.S. has spent about $1.2 trillion on the wars in Iraq and in Afghanistan in the past decade.

Time was, a war abroad was a galvanizing moment for a certain cross section of Americans. Not only were there large marches and sit-ins, but also creatives wrote poetry and songs, produced anti-war art and put on street theater. The peace-loving, conflict-averse strain of Americankind was vocal and visible and a proud and potent player in the national debate.

"Resistance to war has taken on new and different forms than what we knew in the 1960s," says Barbara Wien, a professor of peace education at American University. "It is insinuated into many, many aspects of our society now, and resistance to war is growing among the world's people. The peace movement is actually everywhere."

But it's just not the same. Now and then, small pockets of protesters still band together. On March 19, for instance, about 100 demonstrators — anti-war protesters marking the eighth anniversary of U.S. military involvement in Iraq — were arrested outside the White House.

"It's a far cry from the Bush years, when hundreds of thousands or millions marched against the war," David Boaz, executive vice president of the libertarian Cato Institute, writes on the Britannica website. He asks the same question: Whatever happened to the anti-war movement?

In the post, he points out that American protests against wars seemed to stop the moment Barack Obama was elected president in 2008. "Maybe anti-war organizers assumed that they had elected the man who would stop the war," he observes.

He concludes that the anti-war activity in the United States — and around the world — a few years ago "was driven as much by antipathy to George W. Bush as by actual opposition to war and intervention."

To buttress his assertions, Boaz cites a recently published study of anti-war protesters. The research was conducted by Michael Heaney of the University of Michigan and Fabio Rojas of Indiana University. It concludes that the anti-war movement in America evaporated because Democrats — inspired to protest by their anti-Republican feelings — stopped protesting once the Democratic Party achieved success in Congress in 2006 and then in the White House in 2008.

"As president, Obama has maintained the occupation of Iraq and escalated the war in Afghanistan," Heaney, an assistant professor of organizational studies and political science, said in a news release. "The anti-war movement should have been furious at Obama's 'betrayal' and reinvigorated its protest activity."

Instead, Heaney continued, "attendance at anti-war rallies declined precipitously and financial resources available to the movement have dissipated. The election of Obama appeared to be a demobilizing force on the anti-war movement, even in the face of his pro-war decisions."

So is Barack Obama the new George W. Bush? Could a "new, non-Democratic" anti-war coalition rise up to protest against the wars being waged today? Boaz asks. "And the $64,000 question — though these days it would have to be at least a $64 billion question — could a new anti-war movement hook up with the Tea Party movement in a 'Stop the War, Stop the Spending' revolt?"

After all, the Tea Party has shown that it knows how to stage demonstrations.

And what about the younger generations? With the American anti-war movement of the 1960s came a widespread interest among students in peace, justice and conflict resolution. Today, dozens of colleges and universities offer courses — and some offer majors — in peace studies. There are professional organizations such as the Peace and Justice Studies Association and the International Peace Research Association.

With America mired in a myriad of military pursuits, what do professors of peace studies say in the classroom? "The 'why' does get a bit complicated at times," says Juniata's Celia Cook-Huffman, but the students "seem willing to struggle with that."

And how do students respond? In various ways. "Some are ready to take action and do," she says. And "some feel overwhelmed and aren't sure what to do."