Accessibility links
Real Estate, Autos Drive Reform Talk In Cuba In preparation for the first Communist Party Congress since 1997, Raul Castro has outlined hundreds of reform measures, including some that would start to phase out many of Cuba's classic American cars and others that would change Cuba's property laws. 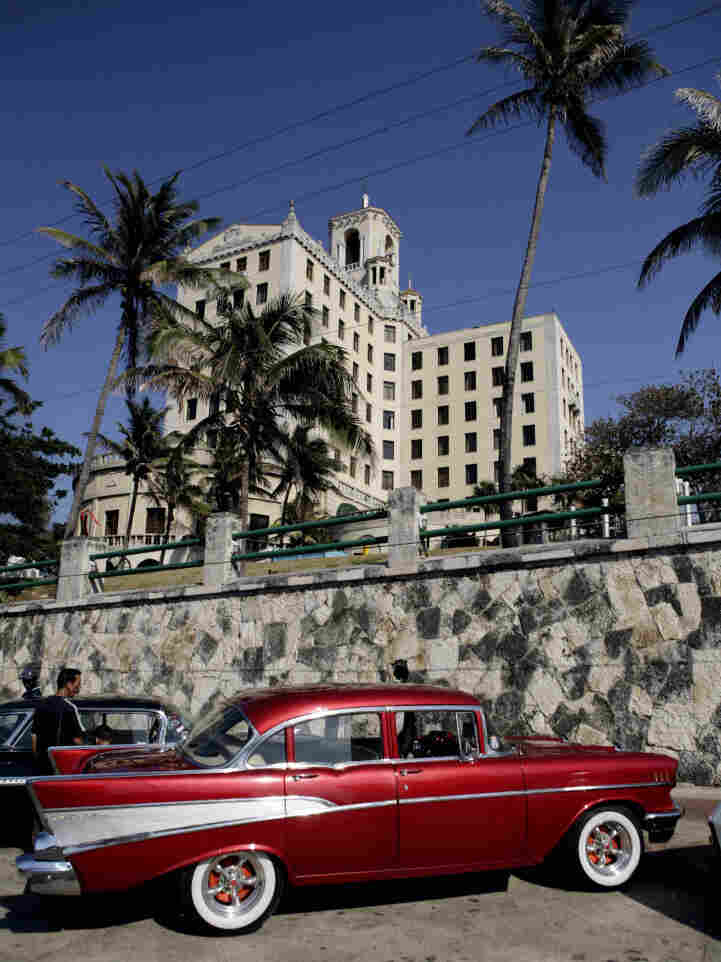 An old car is seen parked in front the National hotel during a classic car rally in Havana, Cuba, on April 7. Javier Galeano/AP hide caption 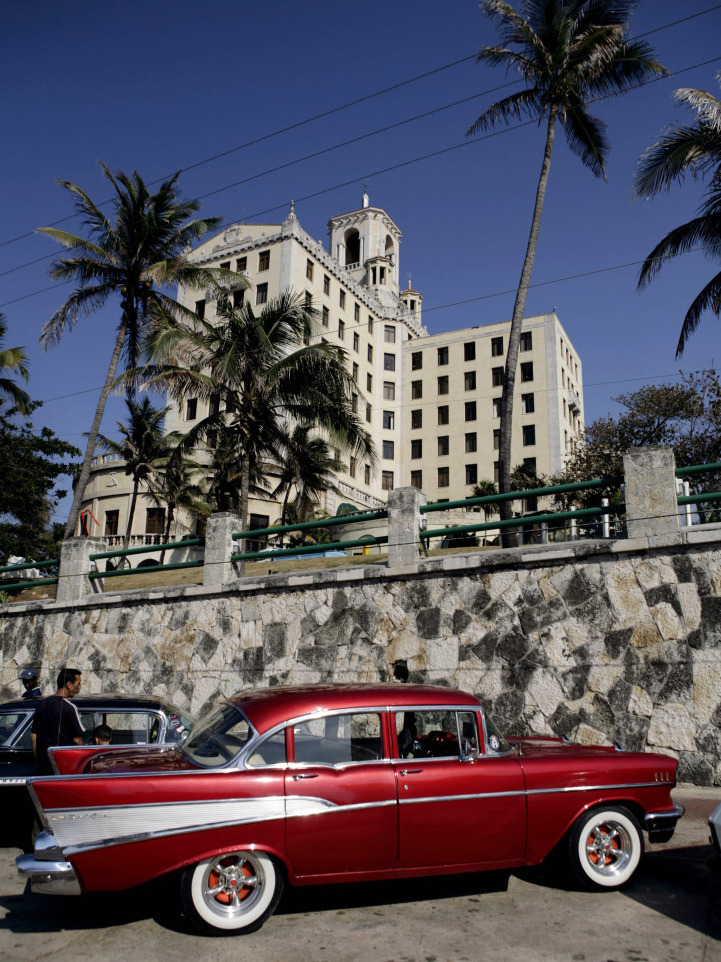 An old car is seen parked in front the National hotel during a classic car rally in Havana, Cuba, on April 7.

Cuba's Raul Castro has outlined hundreds of reform measures in preparation for the big Communist Party Congress that starts this weekend, the first since 1997.

Some would entail major changes to Cuba's property laws. The reforms could lead to a real estate boom, but could also mark the beginning of the end for many of Cuba's classic American cars.

It is the quintessential image of Havana postcards and tourism brochures — dozens of battered Fords, Buicks and other aging clunkers from Detroit's heyday lined up in colorful formation outside the elegant Cuban Capitolio.

Giordis Londres runs a fixed-route trip through the city, charging passengers 40 cents to ride in his 1951, baby-blue Cadillac Limousine — now fitted with seating for eight.

There's an entire Cuban history lesson under the hood — some parts are cannibalized from Soviet vehicles, and the diesel motor once powered an Italian Fiat pickup truck. But the most unusual adaptation is the plastic Flintstones vitamin bottle Londres got from relatives in the U.S. that he has rigged to hold in the car's brake fluid.

"These are things you learn out of necessity," Londres says, explaining that he sets aside every Tuesday as a maintenance day for the car, which is a family heirloom that he inherited from his father.

The Cadillac and other rolling symbols of American prosperity are still on the road mostly because of a Cuban communist quirk. Russian Ladas and modern European or Asian models now make up most of the vehicles on Cuba's roads, but only cars manufactured before the 1959 Cuban Revolution can be freely bought and sold here.

If Cuba lifts those restrictions on vehicle sales and opens the island to even more imports, it could be a first step toward the gradual disappearance of the old gas-guzzlers.

However, an even bigger change may be coming to Cuba's real estate market. For decades, the Castro government has prohibited Cubans from buying and selling their homes, strictly controlling new construction even as the city grew.

These cars are a part of our national identity now, like rice and beans, or roast pork. We take care of these old American cars as if they were another member of the family.

So when Havana residents need to move, they go to a designated spot along the city's Prado boulevard, where black market real estate agents facilitate housing swaps.

They're legal but must get state approval, so to navigate the process, Cubans turn to agents like 83-year-old Manuel Vasquez. He sits in the shade with a Panama hat, big black sunglasses and a worn leather briefcase of real estate listings. He says he has negotiated about 2,000 "permutas," as the housing exchanges are called, over 40 years.

"There are some problems that the revolution can't solve," he says — like when growing families or divorced couples need two homes, he explains, or if empty-nesters find their apartments too large. He says that's the social work he provides.

The housing swaps usually involve some amount of money, and there are more and more stories of homes here being sold on the black market for hundreds of thousands of dollars, even if buyers can't get proper titles.

Fixing Up The System

Workers mixing cement in Old Havana are part of a push to fix up the city's historic core, but beyond the tourist areas there are countless homes falling to pieces for lack of maintenance funds.

A flood of investment capital could save them if Castro legalizes Havana's informal real estate market as proposed. But it's not clear how the system would work.

"At the beginning, I think there would have to be limits on the number of properties a person could acquire," says Oscar Espinosa Chepe, a dissident economist. He says that opening up and legalizing the real estate market is an essential step, but it will require careful regulation to limit speculation.

The Castro government has clearly stated that no one will be allowed to accumulate too much wealth from the market-driven reforms to Cuba's socialist economy that are on the agenda for April's Communist Party Congress.

As for Cuba's classic cars, mechanic Jorge Prats says he thinks they'll be around for at least another 50 years.

"These cars are a part of our national identity now, like rice and beans, or roast pork," Prats says as he shows off his two-toned, bright red-and-white 1955 Chevrolet Bel Air coupe. "We take care of these old American cars as if they were another member of the family."

Prats lifts the hood to display the car's original motor and then points to the brand-new side mirrors that he recently ordered from Miami.

With all the Cuban-American travelers coming from the U.S. these days, he says, he can finally get original parts for his Chevy.