Accessibility links
Marathons, Once Special, Are Now Crowded The Boston Marathon requires participants to qualify in order to enter — a barrier that once kept the nation's oldest and most elite marathon from filling up. But this year, spots in the race were gone in just over 8 hours. 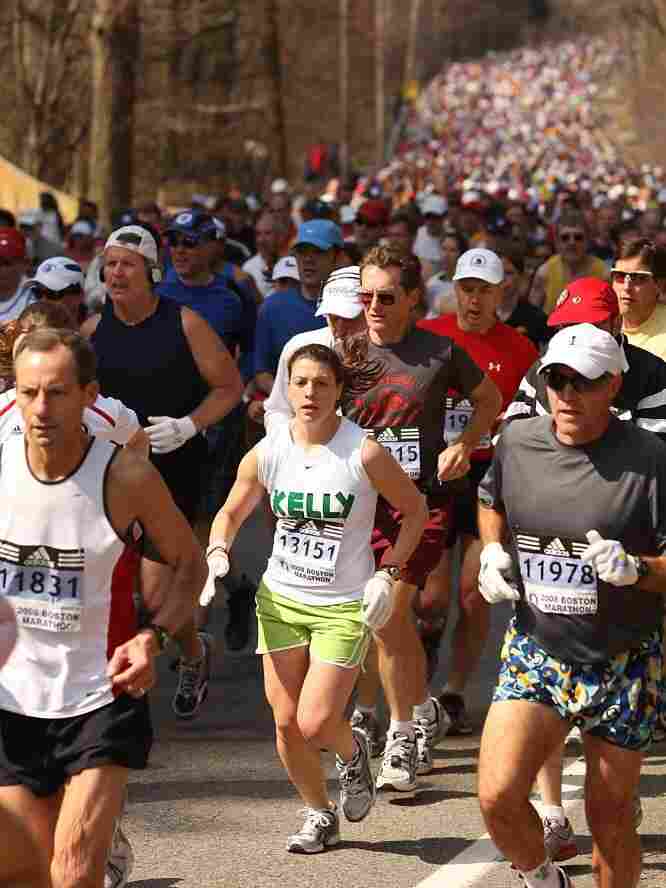 Runners compete in the 2008 Boston Marathon. Faced with a rising number of qualified entries, the race's organizers plan to adjust the rules to favor runners with the fastest times. Elsa/Getty Images hide caption 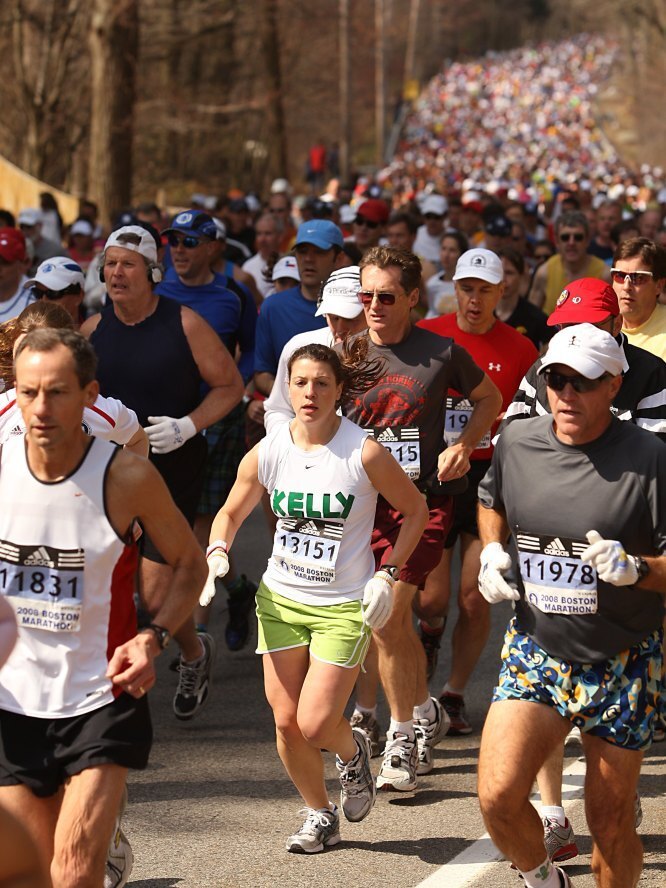 Runners compete in the 2008 Boston Marathon. Faced with a rising number of qualified entries, the race's organizers plan to adjust the rules to favor runners with the fastest times.

The Boston Marathon requires participants to qualify in order to enter — a barrier that once kept the nation's oldest and most elite marathon from filling up. But this year, spots in the race were gone in just over 8 hours.

So, what has changed?

Across the country, a record number of Americans are running marathons. And that popularity is actually a bit of a pain for the sport.

Legend has it that the Greek messenger Pheidippides ran 26.2 miles from Marathon to Athens — and then collapsed and died. That was the original marathon. But what was once an act of rare heroism is now sort of common.

At 25, Rachel Couchenour is training for her first marathon — the Country Music Marathon in Nashville, Tenn.

"I only started running a little over a year ago," she says. "I couldn't even run for, like, 5 minutes straight."

After a sorority sister was diagnosed with non-Hodgkin's lymphoma, Couchenour decided to join the charity running group Team in Training. The organization raises money for leukemia and lymphoma research.

On a recent day, Couchenour is running 20 miles — the longest distance she'll run before the marathon itself.

"I feel like the last six will be mainly mental," she says. "I'm like, what's another hour of running after this? Can't be too bad, right?"

The belief that anyone can run a marathon is a mantra in running circles. And it seems that almost everyone is.

Last year, more than a half-million Americans ran marathons — an all-time record. And that's partly because of groups like Team in Training.

"These training programs are the pipeline for this growth," says Ryan Lamppa of the research group Running USA.

"They can take that new runner from unfit to finish a marathon in 3 to 6 months," he says. "They opened up the sport to mainstream America."

Couchenour knows that firsthand. As she crosses the chalk finish line on her training run, she is rewarded with purple Mardi Gras beads and chicken nuggets.

And without that help, Couchenour says, she probably would not make it to the finish line.

And as more novices like Couchenour start running, "They are drawn to go out and see how fast they can go," says Tom Grilk, who heads the Boston Athletic Association. The group hosts the annual Boston Marathon.

"Then, people get more excited about how fast they're going, and that's when you see them start aiming to qualify for Boston, as a kind of badge of accomplishment within the sport."

Boston is the pinnacle of all marathons.

Ben Beach is running his 44th consecutive Boston Marathon. When he first started running Boston, no women ran in the race. He says he was one of perhaps 1,000 runners — all men. Now, more than 40 percent of the marathon's participants are women.

Beach says he thinks the current marathon mania is healthy — a sign that more people are thinking about fitness.

And while the folks who host the Boston Marathon are also happy that more people are running, they worry that as mainstream American joins the race, amateurs will dilute Boston's prestige — especially if the fastest runners are locked out because they miss the sign-up.

So, new rules are on the way: Starting next year, the folks with the fastest times can sign up first. That means not everyone who technically qualifies for Boston will get to run. There are just too many marathon runners.