Accessibility links
The Root: Is Broadway's 'Book Of Mormon' Offensive? The creators of the animated series South Park have brought a musical called The Book of Mormon to Broadway. Janice C. Simpson of The Root argues that the musical somewhat uncomfortably casts black people as the ultimate butt of their jokes.

The Root: Is Broadway's 'Book Of Mormon' Offensive?

The Root: Is Broadway's 'Book Of Mormon' Offensive? 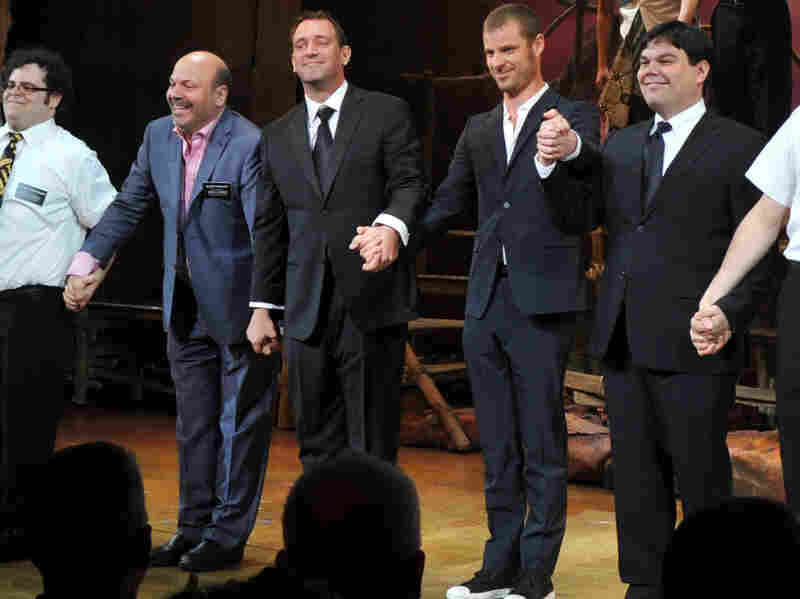 Writers Trey Parker and Matt Stone (center) take a bow during the curtain call on the opening night of their musical The Book of Mormon on Broadway on March 24. Parker and Stone are most well-known for their animated show South Park. Stephen Lovekin/Getty Images hide caption 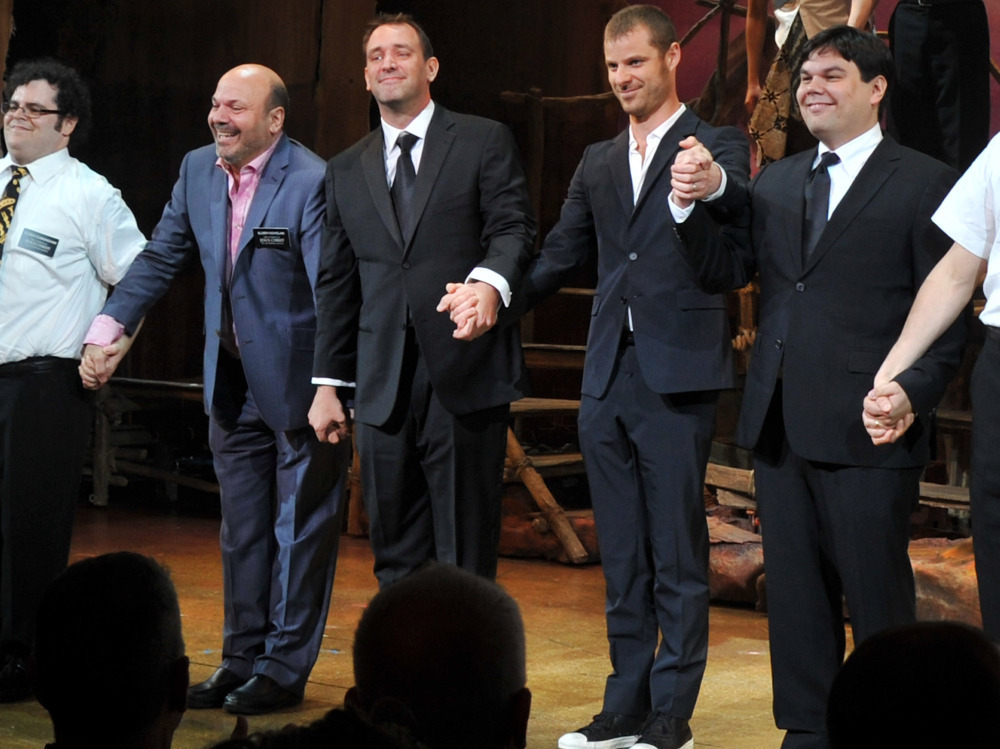 Writers Trey Parker and Matt Stone (center) take a bow during the curtain call on the opening night of their musical The Book of Mormon on Broadway on March 24. Parker and Stone are most well-known for their animated show South Park.

Janice C. Simpson teaches at the City University of New York's Graduate School of Journalism and writes the blog Broadway & Me.

Trey Parker and Matt Stone, the guys who created South Park, like to boast that they are equal-opportunity offenders. Which is true. Over the past 10 years that their potty-mouthed, thumb-in-your-eye animated series has been on the Comedy Channel, they've mocked gay people, black people, Canadian people, Tom Cruise and the Church of Scientology, the Pope and, most infamously and dangerously, the Prophet Muhammad.

Now Parker and Stone have brought their act to Broadway. The Book of Mormon, the new musical that they've written in collaboration with Robert Lopez, the co-creator of the equally irreverent Muppets-style musical Avenue Q, sends up the Church of Jesus Christ of Latter-day Saints, celebrity do-gooders and the people of Uganda.

The musical tells the story of two young Mormon missionaries who are sent to a small village in Uganda to convert the people there. They are the usual odd couple you find on TV and in movies and musical comedies. In this case, one is a golden-haired Mormon poster boy who would rather be in Orlando, Fla., and the other is an overweight outcast who just wants people to like him.

The show is unlikely to be a fan favorite in the Mormon community. But if you're black and your skin is even a little thin, there's plenty in this show to rub you the wrong way, too. The Ugandans whom the missionaries encounter are plagued by poverty, AIDS and an evil warlord who forcibly subjects women to circumcision.

Despite these woes, the villagers are portrayed as good-hearted, if simple-minded, people. One keeps referring to an old battered typewriter as her "texting machine." Another stomps around talking about raping babies because he believes that doing so will rid him of HIV. A dream sequence is set in hell, where the devil's main disciples are Genghis Khan, Adolf Hitler, the serial killer and cannibal Jeffrey Dahmer, and Johnnie Cochran, who, a song explains, is there for his part in helping to free O.J.

It's all played for can't-you-take-a-joke laughs. But how funny can it be that AIDS has ravaged Africa, that warlords oppress their fellow citizens or that women and children are subjected to forced clitoridectomies? Parker and Stone, who call themselves libertarians, have gotten away with this kind of cavalier attitude toward serious subjects for years because of their ability to sugarcoat it with faux irony. Which explains why even diehard liberals routinely turn a blind eye to their anti-gay jokes.

With The Book of Mormon, Parker and Stone are indulging in cultural colonialism of the most insidious kind. When one villager complains about having "maggots in my scrotum," the missionaries advise him to see a doctor. "I am the doctor," he replies. It gets a big laugh, so much so that the line is repeated over and over during the show. Peeking out from behind the joke, at least in part, is the belief that African doctors really are that dumb.

Sure, the head villager is seen as a wise man, and his daughter is the doe-eyed idealist who brings the sides together. But the show doesn't work unless the villagers are seen mainly as noble savages who need white people to show them the way to enlightenment. And in the end, their salvation comes from believing in the white missionaries who have been dropped into their midst. Even the warlord — make what you will of the fact that the show's creators have named him General Butt-F - - - ing Naked — is brought around.

Let me make it clear that I'm not trying to bad-mouth the actors who play these roles. They're very talented people. They give terrific performances. And as black actors have had to do for generations, they are adept at playing the text while signifying that they know what's really going on.

The problem is whether the people yukking it up in the audience know what's going on. Parker and Stone may be high priests of postmodern comedy, but what they're practicing still looks a lot like the same old same old.