Accessibility links
House Approves Sweeping GOP Budget Blueprint The nonbinding measure calls for dramatically revamping Medicaid and Medicare to pare trillions of dollars over the next decade. But it stands little chance of even reaching a vote in the Senate. Instead, it is likely to serve as an opening salvo in the debate over America's fiscal future and the 2012 election. 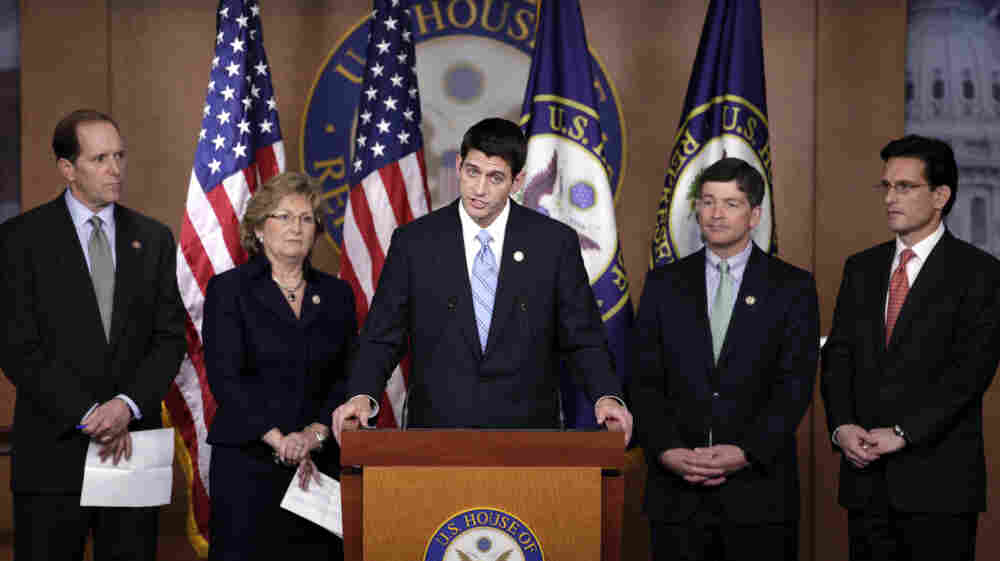 House Budget Committee Chairman Paul Ryan of Wisconsin, pictured with fellow Republicans at a news conference, said this week that "the biggest threat to Medicare is the status quo and the people defending it." Carolyn Kaster/AP hide caption

The House on Friday approved a sweeping blueprint aimed at cutting the deficit by hitting at the heart of entitlement programs, calling for dramatically revamping Medicaid and Medicare to pare trillions of dollars over the next decade.

The GOP's nonbinding budget framework for the next fiscal year, beginning Oct. 1, won by 235-193, with only four Republicans voting against the measure and no Democrats voting for it. The plan would purportedly cut nearly $6 trillion in spending over 10 years, close tax loopholes and reduce tax rates for corporations and the wealthy.

The vote on the plan put forward by Rep. Paul Ryan (R-WI), chairman of the House Budget Committee, comes a day after Congress passed legislation that funds the government through the remainder of fiscal 2011.

On the floor of the House ahead of the vote on Friday, Ryan said President Obama's alternative to his plan was about "more spending on everything — but cut and gut defense and raise taxes a lot."

House Speaker John Boehner (R-OH) said the nation's debt was "a moral threat" to the country that needed to be addressed.

"We have a moral obligation to speak the truth and do something about it," he said.

"It's focused on helping corporate special interests and Wall Street — not reducing the deficit or helping the country," she said.

"Now is the time to save Medicare and I can assure you that Democrats will," Pelosi said.

Despite winning approval in the GOP-controlled House, Ryan's plan stands little chance as written of even reaching a vote in the Senate, where Democrats still hold the majority. President Obama would most likely veto the measure even if it did pass.

Instead, it is likely to serve as an opening salvo in the debate over America's fiscal future and the 2012 election, with GOP lawmakers hoping to shore up support from the conservative Tea Party movement.

But the plan to fundamentally reshape the government's role in health care for the elderly and the poor is politically risky. In a Pew Research Center poll conducted last month, 65 percent of respondents said they oppose changes to Social Security and Medicare to reduce the deficit. Medicare, Medicaid, Social Security and defense spending account for about 80 percent of the federal budget, according to The Associated Press.

Ryan's nonbinding framework for future legislation would make stiff cuts to Medicaid, the medical insurance program for the poor and disabled, and transform it into a grant program run by the states. Under the proposal, the government would provide future retirees with vouchers to buy private insurance coverage.

People now 55 and older would stay in the current system, but younger people would receive the insurance subsidies.

Obama said earlier this week that Ryan's proposal would slash health care coverage to 50 million Americans, including grandparents needing nursing home care, children with autism and kids "with disabilities so severe that they require 24-hour care.

"These are the Americans we'd be telling to fend for themselves," Obama said in a speech where he laid out his own budget proposal. He said his plan would cut the federal deficit by $4 trillion over 12 years by eliminating health care fraud, raising taxes on the wealthy and paring defense spending.

There's another huge spending fight looming on the horizon in May, when the U.S. Treasury is expected to hit its $14.3 trillion borrowing cap. That upper limit on borrowing has been increased with little fanfare 10 times in the past decade. But House Republicans are threatening to vote no this time unless the debt limit increase also includes more cuts to spending.

NPR's David Welna contributed to this report, which also contains material from The Associated Press