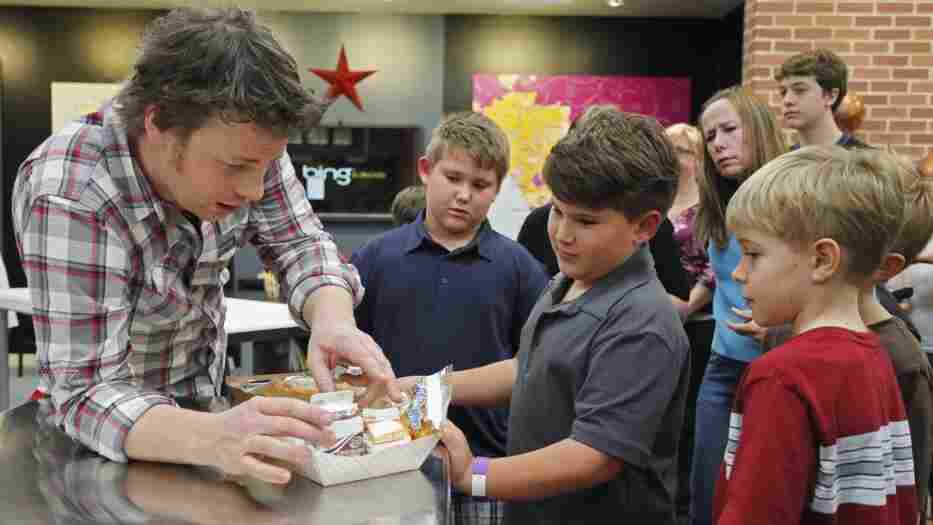 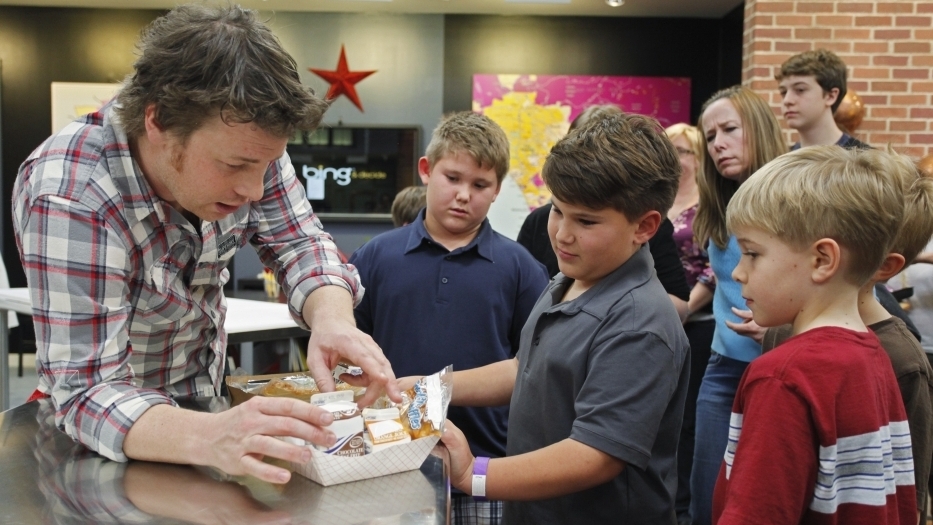 The second season of Oliver's reality show Food Revolution features him badmouthing L.A. school lunches — and the school district is now fighting back with some new cuisine.

But for the purposes of Oliver's show, the city revoked the permits the ABC program needs to film in schools.

"They will not let me into any school, which means it's war," Oliver says.

So at his own test kitchen, the British crusader invites a group of L.A. students and parents to bring in food from their school cafeterias.

"That's stewed fruit in sugar syrup, good old chocolate milk. What's that, a waffle?" he asks. Other items include doughnuts with frosting, pizza and fries.

Then Oliver demonstrates how much sugar is added to the flavored milk in L.A. schools every week by filling up a school bus with 57 tons of white sand.

"Yeah, I'm trying to make it dramatic, because I want people to care," Oliver says in the episode. Oliver was first praised in his native England for helping revamp school lunch menus, and last year on TV, he crusaded in Huntington, W.Va.

"The food that we serve is healthy and nutritious and very good quality," Binkle says.

Binkle told reporters his menus have less sodium and fat than federal requirements. But 75 percent of the milk L.A. students drink is chocolate- and strawberry-flavored.

"We don't serve pop and candy bars at schools. We're not allowed to serve a lot of the things that were shown," Barrett says.

L.A. officials originally turned down Oliver's requests to film in schools in an attempt to avoid the kind of conflict and drama depicted on reality TV. Spokesman Robert Alaniz says that last fall, the district was burned by the show School Pride, which did a campus makeover.

After the episode aired, news reporters were allowed to tour the district's central kitchen facility. Here, 122 million meals a year are packaged for L.A. students. The challenge is to create healthful meals that cost no more than 77 cents each.

And every week here, schoolchildren like Alexis Galardo and Myre Bombardo taste-test upcoming school lunches. A recent menu included a tostada and a chocolate cup.

At nearby Bravo Medical Magnet High School, the lunch crowd is hardly enthusiastic about the new meatloaf patties on the menu.

"That's pretty nasty. I wouldn't even feed that to my dog," says Mark Anthony Torres, 14. Torres says he would rather eat chips and candy than the greasy cafeteria food. But he's all for organic foods and a salad bar.

"I do agree there should be a food revolution. Even though they say the food's healthy here, I know it's not. This is microwaved food," Torres says.

L.A. district officials touted their newest offerings, such as sushi rolls, chicken tandoori and pad Thai. Spokesman Alaniz says the menu changes are not in response to the reality show's pressure. Still, he says Oliver has an open invitation.

"Jamie, come in, help us put together a healthier, tastier menu, but leave your cameras behind," Alaniz says.

One upcoming Food Revolution episode shows Oliver briefly getting into one L.A. prep school before getting kicked out.