Accessibility links
Egypt Finds Its Own 'Jon Stewart' The audience for Egypt's Bassem Youssef Show is growing as fast as a snowball rolling down a hill — and it exemplifies everything that is new about media in post-revolutionary Egypt.

The audience for Egypt's Bassem Youssef Show is growing as fast as a snowball rolling down a hill — and it exemplifies everything that is new about media in post-revolutionary Egypt.

Tarek AlQazzaz is general manager at Baraka One Web, a production company that is actually making money posting original content on YouTube. When AlQazzaz cooked up a show starring his old friend, Bassem Youssef, he was enmeshed in the revolution based in Tahrir Square, where Youssef, a heart surgeon, was attending to the wounded. 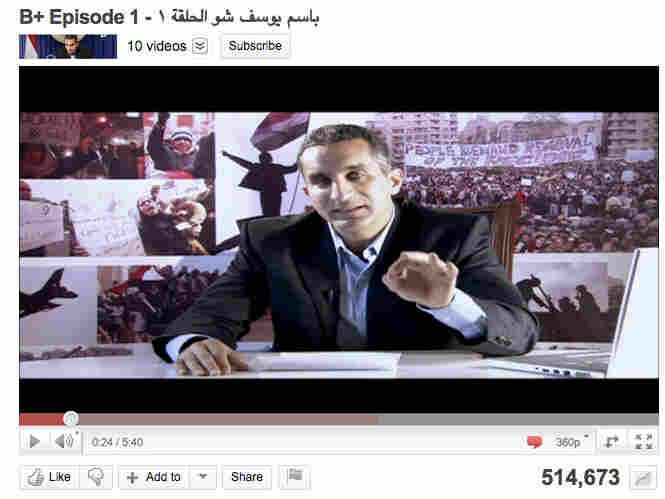 AlQazzaz says he told his friend: "I need to shoot something for the revolution and I know that you have Jon Stewart everywhere in your, in your being, OK, and I'm like, 'Let's do the Egyptian version.' "

"I always dreamt of having something like this in Egypt, where you actually have no limits in satire," Youssef says.

"I mean, Jon Stewart and Stephen Colbert works on how ridiculous the media is," he says. "And the 18 of the days of the revolution we were actually the home of stupidity ... it was like juicy, wow, I mean it was a gold mine," he says.

The Bassem Youssef Show is formatted like The Daily Show — an appealing everyman sits in front of a screen airing absurd clips from the media, the bizarre statements of politicians, and reacts accordingly, with wisecracks and funny faces and the occasional prop.

"I'm amazingly modest, and fantastically humble, and I'm really, really up there in being down to earth," he says.

Bassem's show has the most subscriptions on Egyptian YouTube. It has expanded from five to 15 minutes and, last Friday, he drew legions of fans when he dropped in on the ongoing protests in Tahrir Square. His favorability ratings are soaring.

"We just, we don't want lies," says Amr Ismail, the show's executive producer. "We are living 30 years of lying on each other. Makes us hating each other. So, right now people are close to each other. They want the truth; they want everything to be clear. In the media, in social life, in dealing with each other. Just clearness."

Topics from past shows include state media's attempts to demonize the protesters in the square, conspiracy theories involving Kentucky Fried Chicken, and the cynical use of a religion as a goad to influence the vote on the recent referendum on the Constitution. Youssef sets real news clips of people predicting doom to music, and he delights in the panic-mongering.

The show's most profound resemblance to The Daily Show is in its resolute moderation, as when Stewart suggested signs for people to carry at his "Rally to Restore Sanity."

"Here's a quick one" Stewart said on his show. "I disagree with you, but I'm pretty sure you're not Hitler."

In a recent episode, Youssef for the first time switched gears, as Stewart sometimes does, from strategic snarkiness to sincerity. It felt like a big risk.

"My face totally changes in front of the camera and I say, 'There's been like a thick boot on everybody's neck for 30 years. And when the boot is lifted, it's expected that everyone will scream and you will hear things that you do not like,' " he recalls.

The stakes are monstrously high in Egypt right now, and the media's role is crucial. As Stewart once said: "The press can bring its magnifying glass up to our problems, bringing them into focus, illuminating issues heretofore unseen. Or they can use that magnifying glass to light ants on fire."

AlQazzaz, who launched the show, predicts an almost certain future for Youssef on satellite TV.

Brooke Gladstone is co-host of WNYC's On the Media.