Hear A Mix Of Modern Composers From This Year's Concert Series 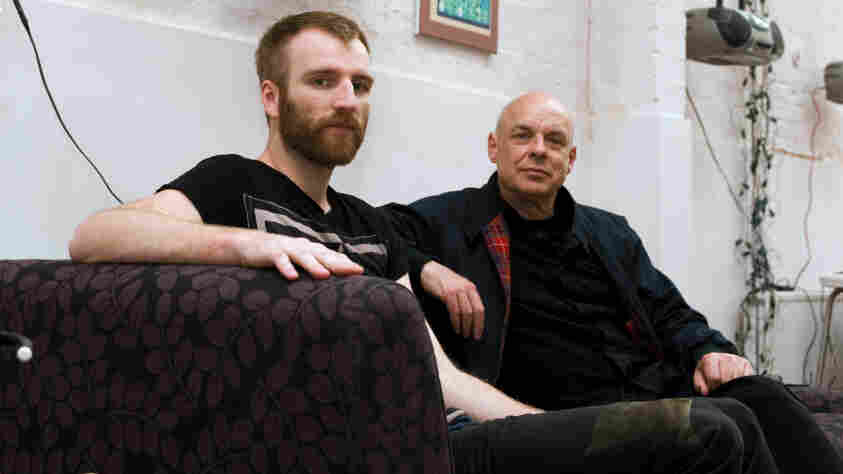 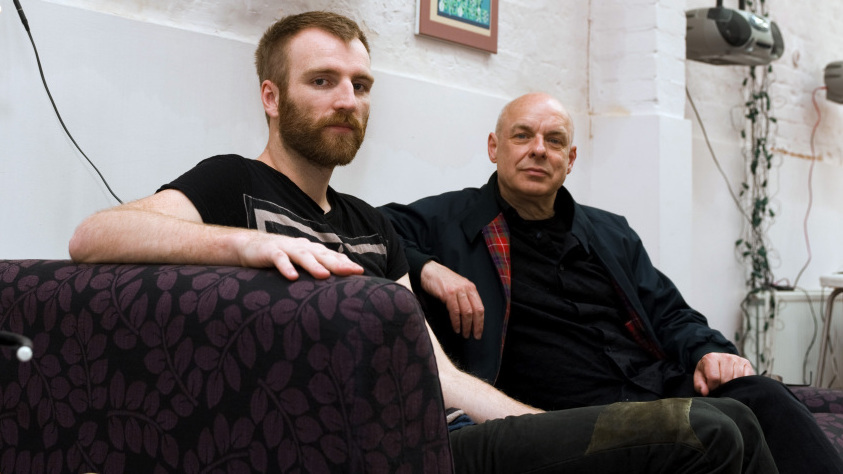 Brian Eno (right) and his protege, composer Ben Frost, are featured at this year's Unsound Festival in New York City.

"Your immediate and focused attention is requested, as this sensitive and unstable event is still unfolding." —The Skull Defekts, "Fragrant Nimbus"

There is music, and there is noise. That statement, uninteresting in itself, becomes less so when you try to determine the boundary between the two. Sound exists as a spectrum, and the bar between music and noise exists in very different places along that spectrum for each listener. At one extreme, you can still find, say, a diehard Bach fan who says that all rock music sounds like noise. This may not be just a dismissive opinion, but a genuine experience of amplified music as being disorganized and grating. In other words, noise. At the other end, you have someone like the late John Cage, who famously said that everything we do is music, and who loved to listen to the sounds of the world coming through the window of his Sixth Avenue apartment in Manhattan. Even Cage, though, was initially repulsed by the dense blocks of sound created by Glenn Branca in his symphonies for electric guitars. The point is, "music" and "noise" are in the ear of the beholder, and the ways we divide and organize the sounds around us are as unpredictable as we are.

This kind of thinking seems to reside at the heart of the Unsound Festival. It has certainly been a part of my thinking in programming New Sounds, the long-running WNYC new-music show that was distributed by NPR for much of the 1980s and '90s. Sounds that may not seem musical at first can become musical in context, and sounds that some people have deep emotional and physical responses to may not be recognizable as "music" to many others. Examples: Train whistles and spoken voices become not just musical, but melodic in Steve Reich's Different Trains. Listening to Ben Frost's By the Throat can be genuinely unsettling, and nowhere more so than in the moments where the recognizable instruments fall away, leaving the whistling Arctic wind, wolf howls and blocks of distorted sound. These are the types of artists who have appeared, both on recordings and in person, on New Sounds over the years, and both will be represented in the Unsound Festival this year, as well.

The festival offers a chance to hear artists you probably haven't heard before, and to reconsider a few that you have. The British artist who records under the name Lustmord is making a rare live appearance. (He apparently didn't play live for many years before performing at a High Mass for the Church of Satan on June 6, 2006 — or 06/06/06.) Lustmord, in a piece like "Dark Awakening," forgoes "musical" concerns like melody, rhythm and harmony in favor of shifting drones, half-glimpsed bits of instrumental color and an opportunity to revel in a dark, ambient bath of sound. As the acknowledged creator of the style known, perhaps inevitably, as Dark Ambient, Lustmord is the type of artist you'd expect to see here.

But what about the late Polish composer Henryk Mikolaj Gorecki? Take his Symphony No. 3: Symphony of Sorrowful Songs, which sold more than a million copies when Dawn Upshaw and the London Sinfonietta recorded it with conductor David Zinman in the early '90s. The instrumentation is fairly conventional; there are beautiful melodies and simple, affecting harmonies. Why is Gorecki here? Well, if there is an "ambient" approach to classical music, Gorecki employs it: His symphony unspools at a glacial pace, threatening to collapse at any moment under its own weight. The sense of tension and suspense created here is a result of a sonic architecture that is dramatically different from a Beethoven or Mahler symphony — and might be closer to the ambient music that Brian Eno was beginning to create at around the same time. Perhaps tellingly, the Norwegian group Deaf Center, an ambient band that wears its David Lynch/Angelo Badalamenti influences on its sleeve, is set to open the Unsound show that will feature some of Gorecki's music.

Listening to any of these pieces — or, better, all of them — will give you some idea of how permeable the boundary between music and noise can be. Listed here are some others that may stretch your ears, and your definition of music, even further.