Accessibility links
Inside Ivory Coast's Palace, 'An Armory, A Powder Keg' Piles of weapons have been found on the grounds of Ivory Coast's abandoned presidential palace. The former rebel commander says the cache suggests Laurent Gbagbo was preparing for war against his own people to stay in office.

Listen
Inside Ivory Coast's Palace, 'An Armory, A Powder Keg' 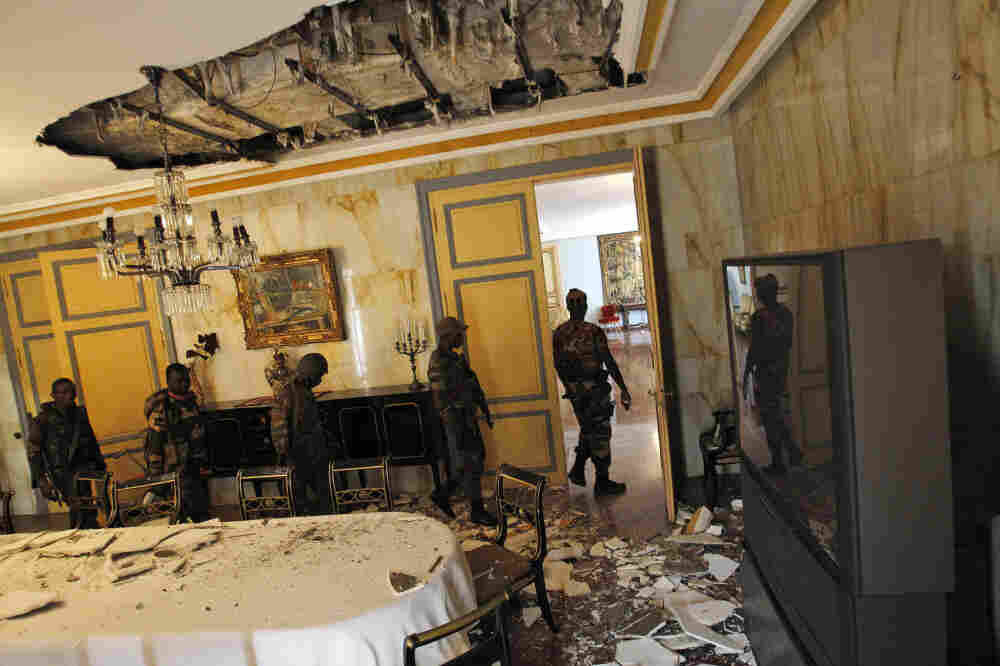 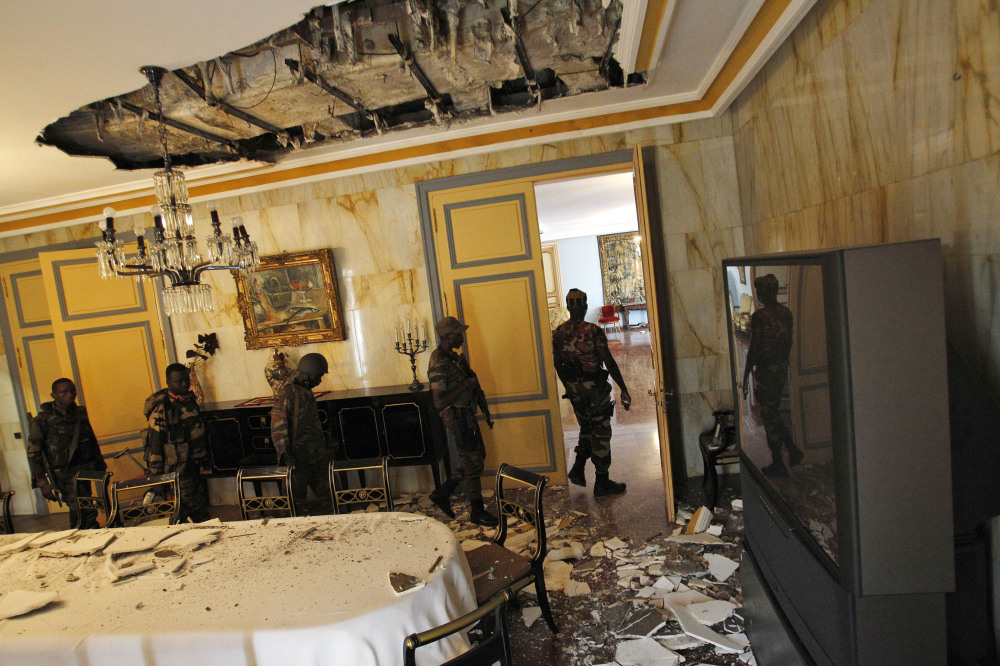 Members of the newly named Republican Forces walk through a damaged dining room of Ivory Coast's presidential palace in central Abidjan on Thursday.

Much has been reported about the presidential residence in Abidjan, which was hammered by U.N. and French attack helicopters trying to draw out the defiant, defeated Ivory Coast leader Laurent Gbagbo. Far less has been heard about the condition of the official presidential palace across town, the symbol of authority in Ivory Coast, where Gbagbo worked — and where a veritable armory was uncovered.

Former Ivorian rebel commander Cherif Ousmane tells soldiers who come from the north and have never before set foot in the commercial capital that the presidential palace in front of them is what they've been fighting for. 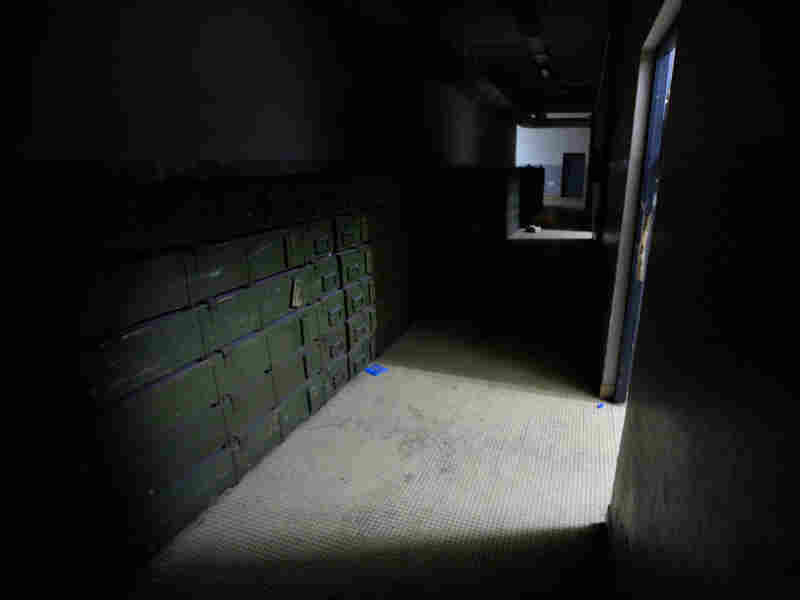 Boxes of weapons and ammunition line a hallway in the basement level of the presidential palace. Rebecca Blackwell/AP hide caption 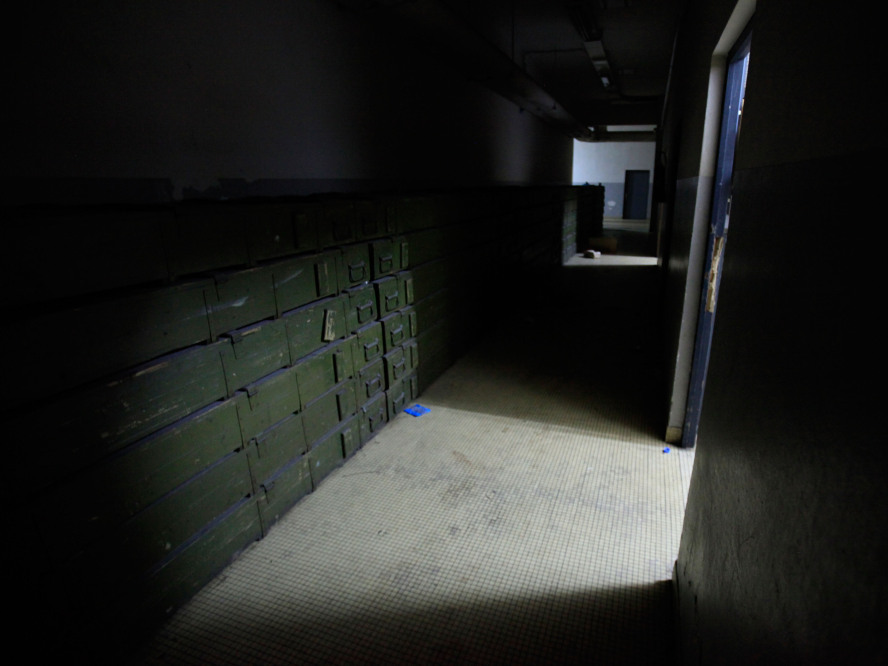 Boxes of weapons and ammunition line a hallway in the basement level of the presidential palace.

The manicured gardens are still neat, but the decorated fountains and bronze statues belie what is found on the grounds. The lawns are littered with abandoned army uniforms, body armor, helmets, cartridges and flip-flops — as if soldiers left in a rush. There's a tank in the backyard and a camouflaged armored vehicle nestled under canopy trees.

Ousmane accuses the ousted president of preparing for war.

"You'll find all sorts of weapons here: heavy weapons, rockets, mortars, BM-21 missiles — 8 feet long. Crates and crates of grenades and ammunition, mines. Assault rifles galore. The presidential palace was an armory, a powder keg," he says. "And all this to be used by Gbagbo against his own people, the Ivorian people."

The newly named Republican Forces, who back President-elect Alassane Ouattara, swept through the country at lightning speed earlier this month and reached Abidjan's city gates for the final military assault.

Inside The Palace Walls

Prosecution A Fate Better Than Death For Tyrants?

At the palace, giant glass doors and windows are missing, likely hit by weapons fire. Glass crunches underfoot on the paving stones and just inside the entrance to the wing where Gbagbo was hastily sworn in as president after November's disputed election.

In the basement are cases upon cases of multiple rocket launchers that used to be called Stalin organs. This is what the United Nations was talking about when it said Gbagbo and his forces were using heavy weapons against civilians.

Standing by a stockpile, one soldier says he's in shock.

"He was even ready to make war against his own people," he says, "against us. Only God saved us."

In Abidjan today, the Red Cross continued collecting corpses — some charred, some lying on the side of the road. The International Criminal Court in the Hague, as well as the U.N. Human Rights Commission, warn they are investigating atrocities and rights' abuses allegedly committed by both Gbagbo's and Ouattara's security forces in Ivory Coast.

"I think the position of the international community is that whoever commits atrocities, whoever commits crimes against humanity should be brought to book," Nigeria's foreign minister, Henry Odein Ajumogobia, said. "That's a lesson for all of us in our global village."

Nigeria is the current rotating chair of the Economic Community of West African States (ECOWAS), which struggled to mediate in the Ivory Coast conflict. And Ajumogobia made the first diplomatic visit to Ouattara by a foreign dignitary since Gbagbo's ouster Monday. He said Nigeria fully supports the pursuit of justice.

"It's important that we learn lessons from this experience. We would only wish and counsel that the process be fair and transparent in determining the excesses that have taken place," Ajumogobia said.

The Nigerian minister says ECOWAS supports peace and reconciliation in Ivory Coast, but there must be no impunity.