Accessibility links
Talk Of Peace In Afghanistan Is A Matter Of Trust There has been a flurry of activity around the possibility of peace talks with the Taliban. The government of Afghanistan, as well as U.S. military leaders, have announced their support for reconciliation, but real negotiations still seem a long way off.

Listen
Talk Of Peace In Afghanistan Is A Matter Of Trust 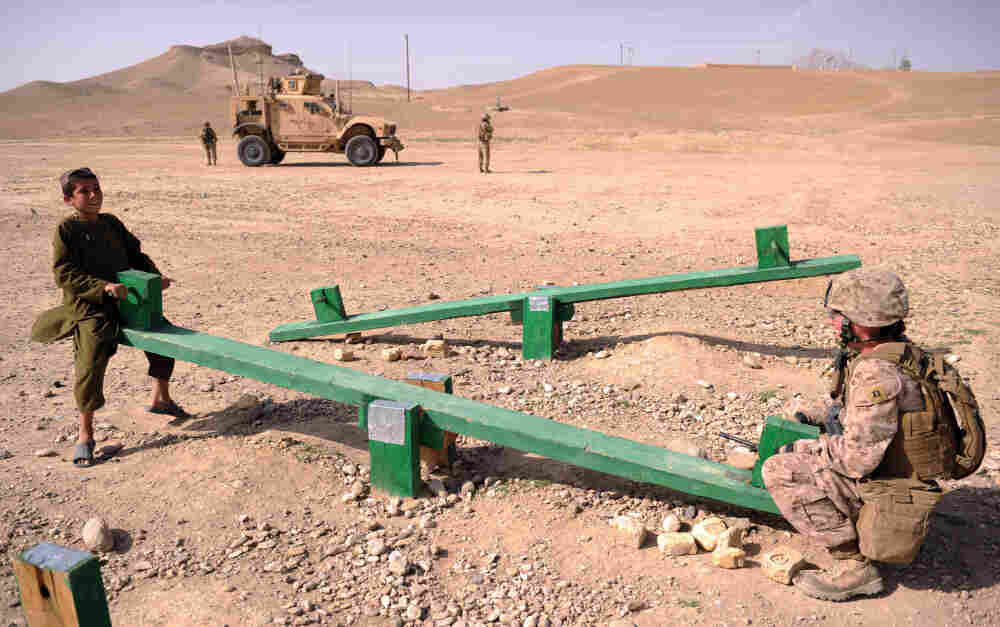 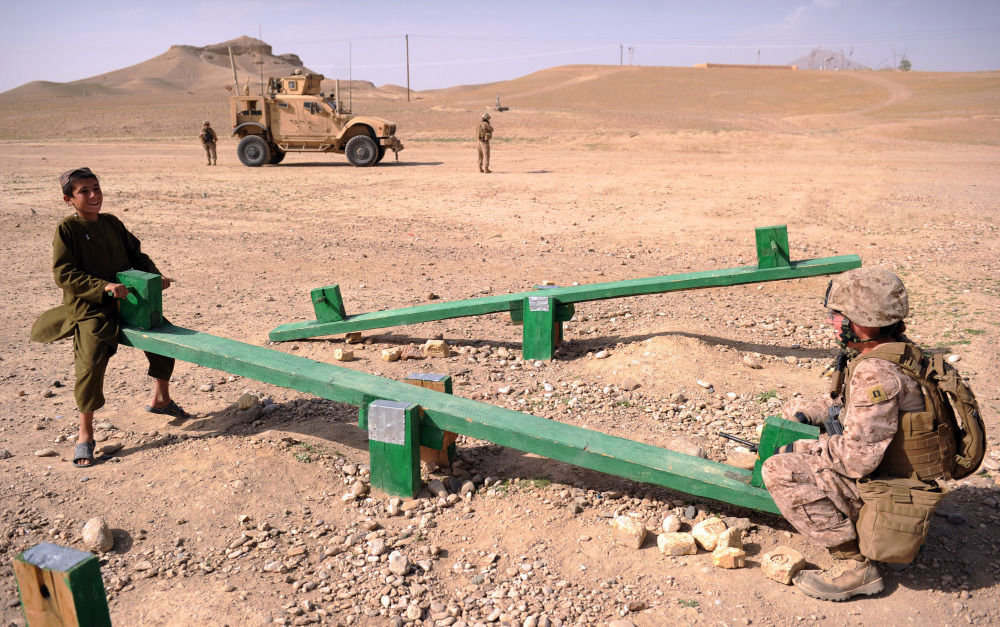 Captain Elizabeth Jackson of the U.S. 3rd Battalion teeters with an Afghan boy on a playground in southern Afghanistan.

Violence is increasing in Afghanistan as the winter snows melt, opening the mountain passes from Pakistan. There has also been a flurry of activity around the possibility of peace talks with the Taliban — which most American and Afghan observers agree may be the only way out of the decade-old war.

The government of Afghanistan, as well as U.S. military leaders, have announced their support for reconciliation, but real negotiations still seem a long way off.

Afghan President Hamid Karzai has regularly appealed for peace among Afghans and talks with the men he calls his "Taliban brothers." Karzai appointed a high council for peace last year, but the same week that the head of the council told journalists contacts with the insurgents had been made, a prominent member of the council downplayed the prospect. Abdul Hakim Mujahid's opinion carries weight, because he was formerly the Taliban government envoy to the UN.

Mujahid complains that the peace council has nothing to offer the Taliban, not even a guarantee of safe passage to meet with Afghan government officials. Plus, he says, his Taliban contacts have only one point they'd like to discuss — foreigners leaving.

Mujahid says there is a huge gap of trust between the Taliban on one side and the government and international community on the other. That may apply especially to the peace council. Despite a few members like Mujahid, who are ex-Taliban, many more are former warlords who have shown no interest in peace talks in the past.

"Many people in Afghanistan I talked to are not convinced that these are people of peace, but more people of war," says Thomas Ruttig of the Afghan Analysts Network in Kabul.

Ruttig says many of the warlords on the peace council are seen as a symbol of the corruption of the current Afghan government, a sentiment that feeds support for the Taliban. He thinks contact between the two sides is probably small-scale at the local level in some provinces. Also, Ruttig says, Afghan society is hardly unanimous in supporting a deal with the Taliban.

"You also need a real national consensus on the Afghan side that negotiations are really what most of the people want," he says. "I see a lot of misgivings amongst a lot of groups — some of the former mujahedeen, some of the political parties, pro-democracy elements, the organized women, civil society in general — who think that what is discussed in the moment is not about peace and reconciliation, but about a shortcut political deal that will put in danger the few things that have been achieved since 2001."

Another major player is the U.S.-led coalition. A surge of U.S. troops last year has put great military pressure on the Taliban, in its traditional strongholds in the south of the country. That maybe aimed at pushing them to the negotiation table. But former Taliban like Mujahid say that the military pressure — which has seen the death in combat of hundreds of Taliban field commanders — may be leaving behind a much more radical generation of the insurgency, one that is even less interested in peace or negotiation.