Accessibility links
Pennsylvania Officials Bust Massive Dogfighting Ring Nineteen people were arrested and 32 animals were rescued in the Philadelphia bust, the largest ever in the area. Normally police only find evidence of a dogfight, but this time they actually caught people watching a live fight.

This week officers in Philadelphia and the Pennsylvania Society for the Prevention of Cruelty to Animals dismantled the largest dogfighting ring the group has ever busted by arresting 19 people.

"This is Spartacus," Berman says. "He came in the other day and clearly was chewed up in the face."

Spartacus sits quietly while Berman points to a notch in the dog's ear — a relic from an old fight, she says. He is one of more than 30 dogs officers rescued from five properties in Philadelphia. Spartacus is covered in tiny hairless scars and bloody cuts, including a big one on his nose.

Read More About One Dog's Recovery 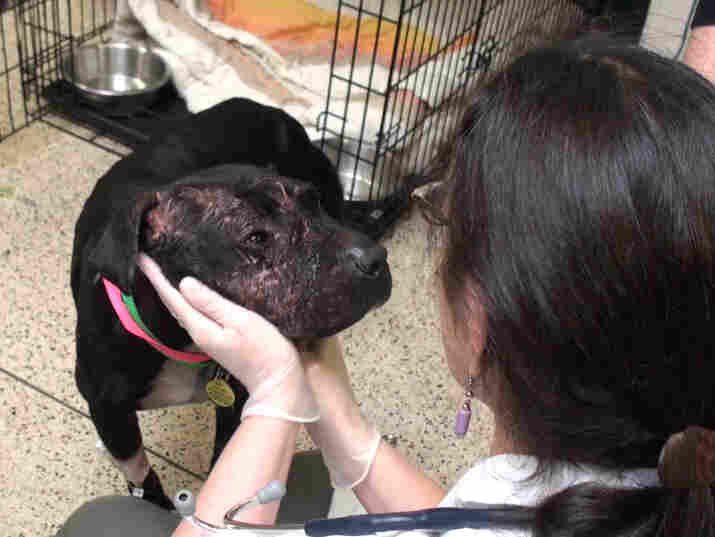 Spartacus is one of more than 30 dogs rescued in the Philadelphia dogfighting bust. Officials arrested 19 people in connection with the dogfighting ring. Kimberly Paynter/WHYY hide caption

Berman lifts up the dog's ear.

"There's dried blood on the dog, and there's cartilage pushing out from the wound," she says.

Spartacus was in the ring fighting when officers raided the house, and Berman thinks the officers' arrival may have prevented more injuries.

Barbara Paul, an assistant district attorney in Philadelphia, hopes the evidence will lead to convictions.

"We got some of the high-end organizers, some of the key people who have big names out on the street in dogfighting," Marano says. "Also just the sheer number of the animals that we took in — we've taken in 32 animals, and that certainly is the largest."

Marano says while the case makes its way through the system, the dogs being held as evidence will rack up a bill.

"It's about $20 a day just to hold an animal as part of a humane law enforcement case," she says. "And then an animal like Spartacus, who's going to require a lot of medical care and medications — it goes up from there."

Marano, Paul and others in the field say even non-animal lovers should care about shutting down dogfighting because this sort of criminal activity often goes hand-in-hand with others. In addition to the dogs and the arrests nabbed from this ring, officers also found weapons, narcotics and large sums of cash.

Paul says sometimes it's really tough to look at the evidence.

"It just breaks my heart," she says. "I go home and hug my cats. I feel so strongly that people need to be punished for this. It's so clear to me in these cases that the people who do this are just really malevolent."

Paul doubts the shutdown of this ring, as big as it was, will deter people from continuing to fight dogs. But she hopes the gruesome images and an increased awareness of the crime will generate more tips from the community.