Accessibility links
Foraging The Weeds For Wild, Healthy Greens Most people only eat a few different vegetables on a regular basis. But urban foragers say most areas of the United States have at least 75 edible, wild vegetables available for picking through the year. Adding wild foods — especially greens — to the typical American diet can provide flavor, nutrition and variety.

Can we come up with a tasty, healthful salad, just by foraging the urban neighborhood around NPR's Washington, D.C., office? That would be the ultimate in locally grown food. But most of us don't know the first thing about foraging wild greens.

So we asked Sam Thayer to join us in a hunt for wild greens. He's a leader in efforts to revive the ancient art of foraging. As we step out the door of NPR's headquarters, Thayer starts scanning the landscape, then lopes across the street, dodging cars.

And he finds it, right across the street: chickweed growing along a chain-link fence. But just because Thayer is passionate about wild foods, it doesn't mean he'll eat any old plant. A block away, he tests the succulence of a patch of henbit and dead nettle by tasting.

A few plants are just too urban, like a prickly lettuce growing at the base of an office building.

"Prickly lettuce is the ancestor of cultivated lettuce," he says, pointing to the lone plant in a sea of blacktop. "This one is covered with some kind of dust from the building, so we won't be collecting this."

Indeed, I'm wondering if that dust contains toxic lead from paint. I'm also wondering about dog pee. Thayer says that's just one of the safety issues to consider when foraging.

"If you're picking from a spot that looks like a dog pee kind of spot, rinse it off or don't pick there," he says. But his biggest worry is herbicides. How to avoid them? Know the area where you're foraging, he suggests, and check plants closely for damage that could be caused by spraying.

Wild greens like ramps have become trendy in restaurants as part of the push for seasonal, locally grown foods. But the newfound popularity could threaten whole populations of wild plants.

Ramps are a type of wild leek (Allium tricoccum) with a pungent, garlicky taste and smell. They shoot up in early spring in woodlands in the Eastern United States. Not so very long ago they were the food of the poor, prized as a tonic after a long winter without fresh greens.

But that era is gone. "The ramp season is about to explode onto farmers market tables and restaurant menus," chirped the Gourmet Live blog earlier this month. "If you've never tried ramps ... buy a bunch and discover what the fuss is all about."

Ramps are slow-growing woodland plants, and the increased demand may be driving harvests down so low they can't rebound. "Just because it's there, doesn't mean it's sustainable," says Lawrence Davis-Hollander, a botanist and ecologist in Sheffield, Mass., who has taken on the cause of the sustainability of wild ramps.

The fear is that ramps fervor could wipe out ramps themselves, as well as other fragile forest floor plants like trillium. Davis-Hollander has urged chefs — and others gathering ramps in the wild — to stop picking the slow-growing bulbs of ramps, which take at least 10 years to grow, and use just the faster-growing leaves.

Horticulturalists and extension agents are also promoting ramp farming as a way to feed new ramp enthusiasts without threatening native plant populations. But it will take time: The seeds can take up to 18 months to germinate, and it can take five to seven years for a plant to grow large enough to harvest the root.

Growing Up 'On Cereal And Milk'

Thayer started eating wild plants as a boy in Wisconsin, walking to and from school.

"I was hungry on the way to school, and on the way home," he says. "I feel like I grew up on cereal and milk. I just needed nutritional variety."

The crabapples and thistle leaf stalks that he browsed whetted his appetite. Soon he was reading everything he could about edible wild plants, and quizzing his grandmother for advice. Now 34, and a resident of Birchwood, Wis., Thayer has written two field guides to edible plants, and lectures frequently on wild foods.

He says adding wild foods to the typical American diet can have a big payoff in flavor, nutrition and variety.

In an hour's exploration around the NPR headquarters building, we found more chickweed; mallow; a big, beautiful dandelion; and a prickly lettuce that was clean enough to eat. But we didn't find enough for a meal; there were none of the abandoned empty lots or wooded areas that Thayer favors.

Then we hit the wild salad jackpot: an abandoned brick flower box next to an old building, crammed full of weeds like shepherd's purse. Thayer started eating with abandon. "I just love the flavor of those stems, raw or cooked. If you can get a big patch of that, enough for a whole meal, it's just absolutely gourmet." 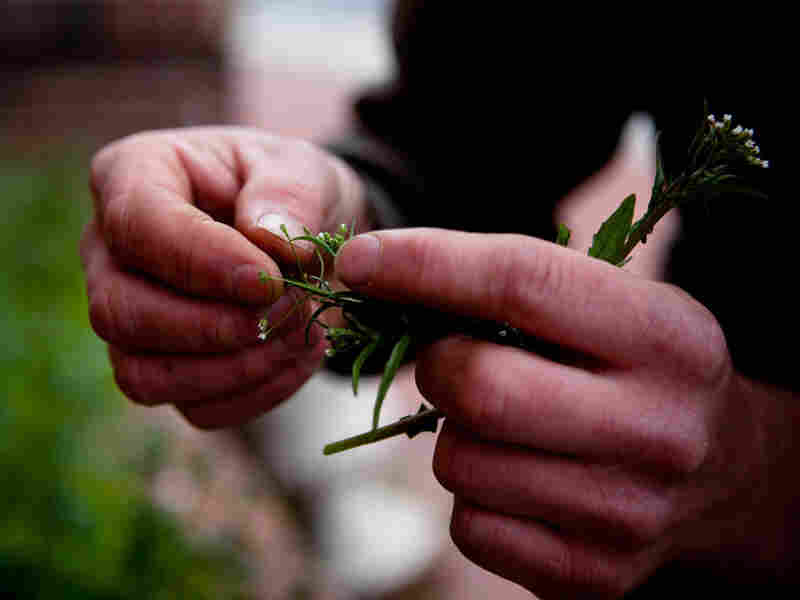 Thayer plucks some shepherd's purse, which is in the mustard family. "I just love the flavor of those stems, raw or cooked. If you can get a big patch of that, enough for a whole meal, it's just absolutely gourmet," he says. Maggie Starbard/NPR hide caption 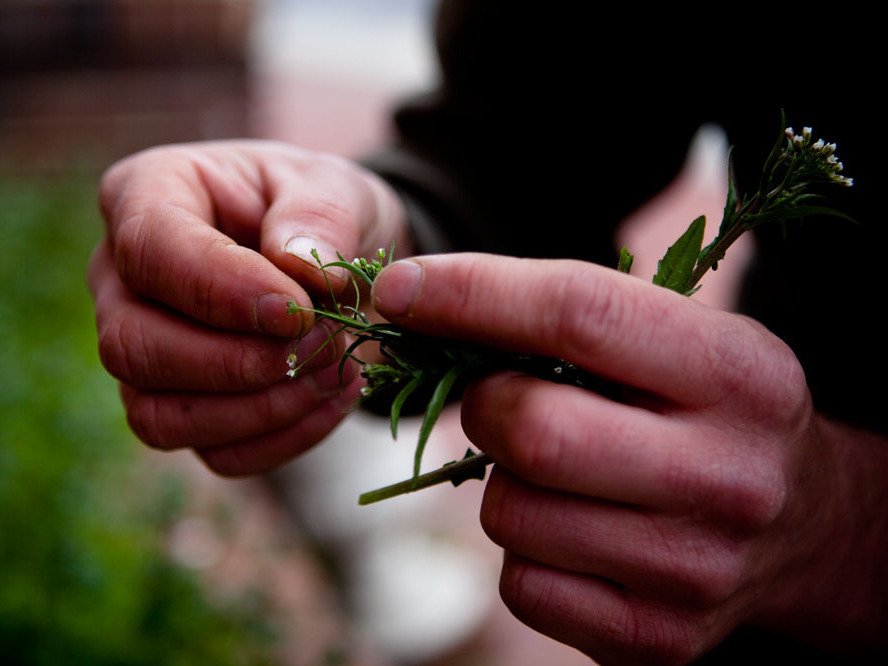 Thayer plucks some shepherd's purse, which is in the mustard family. "I just love the flavor of those stems, raw or cooked. If you can get a big patch of that, enough for a whole meal, it's just absolutely gourmet," he says.

But what really makes Thayer swoon is the sow thistle. That's Sonchus oleraceus to you botanists — a common roadside plant that can grow up to 6 feet tall. Thayer honed in on the stems, stripping off the leaves.

"Ah, that is good!" he says. "You cannot buy anything this good. It's like celery without the stringiness, but the flavor's like the sweetest lettuce you've ever had in your mouth."

That sow thistle was indeed one yummy plant, better than anything I've bought at the grocery store. Thayer says one reason people get turned off to wild plants is that they eat the wrong parts, or eat them at the wrong time of year. Right now, that sow thistle is tender and succulent. In August, it would be nobody's idea of a treat.

Siberian elm seeds are another example of the importance of knowing a plant's seasons. Thayer had spotted a small elm tree loaded with seeds on the way to NPR and wanted to see if it was a Siberian elm. They're common street trees, particularly in the upper Midwest.

"Each one can produce literally thousands of pounds of seeds, and they're absolutely delicious," Thayer says. "They remind me of a cross between oatmeal and lettuce, but the oatmeal's already sweetened."

We track down that elm tree, and eureka! It is indeed a Siberian elm. Thayer says the small green seeds, called samaras, need to be eaten before their edges start turning brown.

"This one is in the ideal stage," he says.

He strips handfuls of samaras off a low-hanging branch and starts munching. I try them, too; they are indeed absolutely delicious, mild and nutty.

Those samaras are a delightful treat. But eating them once a year isn't going to do much to improve my diet. To find out if wild greens really are good for you, we asked John Kallas, a wild food expert, teacher and author in Portland, Ore., who is also a nutritionist with a Ph.D. Wild greens, he says, are one big reason why the Mediterranean diet is so healthy.

"Greeks on the island of Crete ate huge quantities of greens, and they were the healthiest of all the people all over the world," he explains. "No heart disease, less dementia with old age, almost no cancers, period!"

Kallas makes a point of incorporating wild greens into his usual diet, as garnishes on sandwiches and in stir-frys. The wild green frittata he makes for NPR is a good example. It contains an amazing 10 cups of wild greens: four cups of nettles, three cups of field mustard greens, two cups of curly dock, and one cup of garlic mustard.

He has reviewed the research on the nutritional content of wild greens, and says they're generally more nutritious than supermarket spinach and lettuce. The mustard garlic has the highest levels of nutrients of any leafy green ever analyzed, he says. It's high in vitamin A, beta carotene, zinc, manganese and fiber.

But then, so are the other greens going into the pan. Kallas doesn't want people to obsess over nutrients, however. He wants us to think of greens as plain old food, just as humans have done for millennia.

But foraging comes with cautions. Both Thayer and Kallas warn that before eating a plant, you need to be absolutely sure that you know what it is. Thayer says: "You have to be as certain in identifying that plant as you are in identifying a strawberry."

Eating a plant when uncertain can be dangerous, or even deadly.

"Poison hemlock and wild carrot look alike," Kallas says. If people haven't studied the plants, it's easy to confuse the two. "They find something that they think is wild carrot. It's actually poison hemlock, and they eat it and then they die."

Field guides and classes can help foragers learn enough to chomp safely and enjoy the hunt. As Kallas says: "If you can walk around your neighborhood and get sustenance without having to go to the store, you don't need any money. That's an amazing thing." 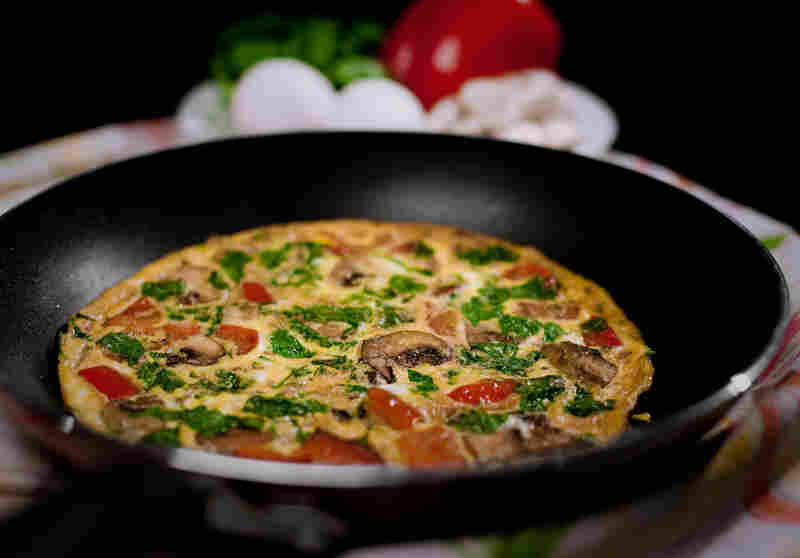 Whisk eggs and set aside. Heat olive oil on medium high in an oven-safe pan. Add the onion, pepper and mushrooms. Saute until the onions have caramelized. Add the rosemary to the pan, stir quickly, and add the eggs. Add wild greens and cover. Lower heat to medium low and cover for 2 minutes or until greens are wilted. Shut off heat. Two minutes after adding egg mixture, remove cover and place on middle rack of preheated oven. Leave in oven for 5 minutes or until dish is done. Let sit for a couple of minutes prior to serving. (This can also be prepared as an omelet cooked entirely on the stove top.)