Accessibility links
Hallelujah! At Age 400, King James Bible Still Reigns The King James translation, first published 400 years ago, is celebrating a birthday of biblical proportions. It's no longer the top-selling Bible, but in those four centuries, it has woven itself deeply into our speech and culture. 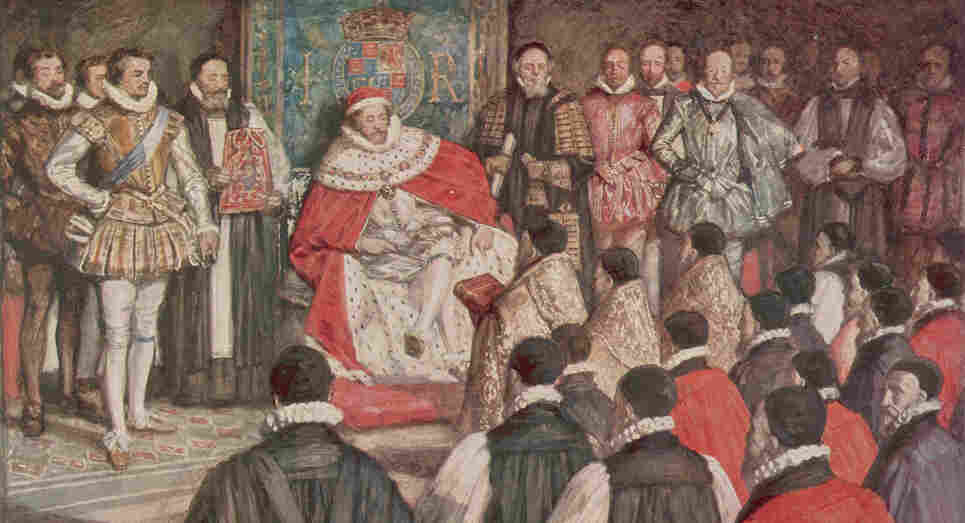 The King James Bible, published in 1611, celebrates its 400th birthday this year. Above, a 1754 illustration depicts a group of robed translators presenting a bible to King James I. The king commissioned the new translation in 1604, and for the next seven years, 47 scholars and theologians worked through the Bible line by line. Illustration by George E. Kruger/Hulton Archive/Getty Images hide caption 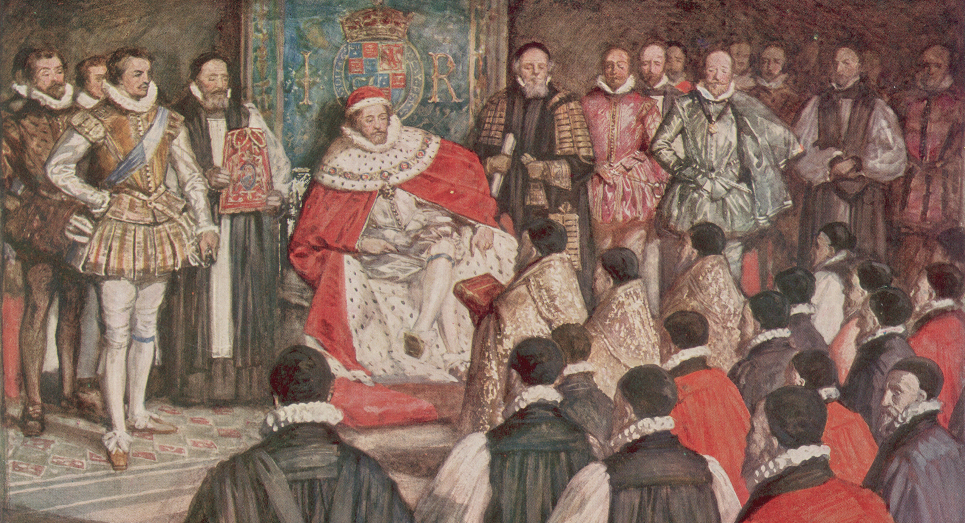 The King James Bible, published in 1611, celebrates its 400th birthday this year. Above, a 1754 illustration depicts a group of robed translators presenting a bible to King James I. The king commissioned the new translation in 1604, and for the next seven years, 47 scholars and theologians worked through the Bible line by line.

This year, the most influential book you may never have read is celebrating a major birthday. The King James Version of the Bible was published 400 years ago. It's no longer the top-selling Bible, but in those four centuries, it has woven itself deeply into our speech and culture. 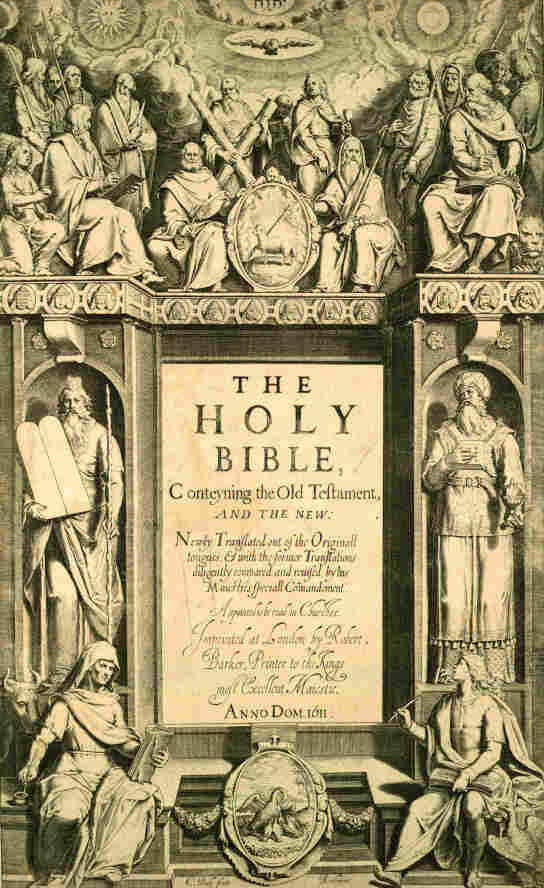 The title page of the first edition of the King James Bible from 1611 reads: "Newly Translated out of the Originall tongues: & with the former Translations diligently compared and revised, by his Majesties speciall Comandement. Appointed to be read in Churches." Click Here To See A Larger Version The Green Collection hide caption

Let's travel back to 1603: King James I, who had ruled Scotland, ascended to the throne of England. What he found was a country suspicious of the new king.

"He was regarded as a foreigner," says Gordon Campbell, a historian at the University of Leicester in England. "He spoke with a heavy Scottish accent, and one of the things he needed to legitimize himself as head of the Church of England was a Bible dedicated to him."

At that time, England was in a Bible war between two English translations. The Bishops' Bible was read in churches: It was clunky, inelegant. The Geneva Bible was the choice of the Puritans and the people: It was bolder, more accessible.

"The problem with the Geneva Bible was it had marginal notes," says David Lyle Jeffrey, a historian of biblical interpretation at Baylor University. "And from the point of view of the royalists, and especially King James I, these marginal comments often did not pay sufficient respect to the idea of the divine right of kings."

Those notes referred to kings as tyrants, they challenged regal authority, and King James wanted them gone. So he hatched an idea: Bring the bishops and the Puritans together, ostensibly to work out their differences about church liturgy. His true goal was to maneuver them into proposing a new Bible. His plans fell into place after he refused every demand of the Puritans to simplify the liturgy, and they finally suggested a new translation. With that, James commissioned a new Bible without those seditious notes. Forty-seven scholars and theologians worked through the Bible line by line for seven years.

Though it cannot be said that all of these phrases originated in the bible, it is likely that the King James Bible was the first time that many of them appeared in English.

Note: Most of these phrases are direct quotations. Others have slight word order changes that make the modern phrase quicker and catchier.

"It is, I think, the most scrupulous process of Bible translation that has ever been," says Campbell, author of Bible: The Story of the King James Version 1611-2011.

What astonishes Jeffrey is that such beauty could be produced by a committee. "The quality of the poetry is extraordinarily high," he says. "It's memorable. It's beautiful. And in the KJV, it's distinctively the voice of God."

Speak ye comfortably to Jerusalem, and cry unto her, that her warfare is accomplished, that her iniquity is pardoned: for she hath received of the LORD's hand double for all her sins.

The voice of him that crieth in the wilderness, Prepare ye the way of the LORD, make straight in the desert a highway for our God.

"You see, see that's not street discourse," Jeffrey says, laughing. "We don't talk like that to each other, do we?"

Today, newer, colloquial translations have pushed the King James aside. It's mainly used in African-American, Mormon and a few Protestant churches. But in moments of tragedy or turmoil or change, leaders have often turned to the King James.

In 1995, President Bill Clinton quoted Proverbs after the bombing in Oklahoma City: "Let us teach our children that the God of comfort is also the God of righteousness. Those who trouble their own house will inherit the wind."

And when the Rev. Martin Luther King Jr. dreamed, only the King James would suffice. Quoted from memory, his wording is not exact, but the poetry and passion are straight from the prophet: "I have a dream that one day every valley shall be exalted, every hill and mountain shall be made low, the rough places will be made plain, and the crooked places will be made straight, and the glory of the Lord shall be revealed, and all flesh shall see it together."

The King James is the poetry that inspired Handel's Messiah, but the words also captivated modern musicians. The Byrds sang from Ecclesiastes in Turn Turn Turn: proclaiming that there is "A time to be born, a time to die, A time to plant, a time to reap, A time to kill, a time to heal."

Simon and Garfunkel echoed the Gospels when they sang, Like a bridge over troubled waters, I will lay me down.

And when Kansas voiced its existential angst — All we are is dust in the wind — it was inspired by the Psalms.

And think great literature: Even the secular novel is drenched in the prose and poetry of the King James. "Just think about titles," says Campbell. F. Scott Fitzgerald: This Side of Paradise, The Beautiful and the Damned. John Steinbeck: East of Eden, The Grapes of Wrath. William Faulkner: Go Down Moses, Absalom Absalom. "There are loads of them," he says. "Buried in the texture of the modern novel, which is a secular form, is a level of religious allusion that reflects the culture from which those novels emerge."

The King James is woven into our lives. It was read in churches and family devotionals for centuries, and today its language laces hundreds of everyday phrases. Consider: "How the mighty are fallen" (Samuel 1:19), and "Can a leopard change its spot?" (Jeremiah 13:23), and "The writing is on the wall" (Daniel 5: 5/6), and "The blind leading the blind" (Matthew 15:14).

"These phrases have become part and parcel then of the general usage in the English language," says Jeffrey. "We do not recognize them any longer perhaps as biblical unless we have a pretty good memory for the language of the KJV."

More On The King James Bible

Campbell adds that this Bible is foundational to the English-speaking world. "It's in the texture of our society rather than on the surface of it, I think. But if you trace back who we are, how we speak, how we think, many of those things have their origins in the King James Bible."

He and others say that new translations will come and go, as our language changes with each generation. But as long we can understand the King James Bible, this four-century-old book will be seen as the voice of God — and the highest poetry of man.

The audio and a previous Web version of this story incorrectly identified a Bible verse quoted by President George W. Bush after the 2003 Columbia space shuttle disaster as originating in the King James Version. It actually came from the New International Version.