Accessibility links
Japanese Celebrate The Dead Amid Town's Ruins On a hillside in the devastated seaside town of Rikuzentakata, residents gathered to honor their neighbors lost to last month's earthquake and tsunami. It was an unusual celebration for Japan, and some survivors say they didn't know how to feel amid the bounty.

Listen
Japanese Celebrate The Dead Amid A Town's Ruins 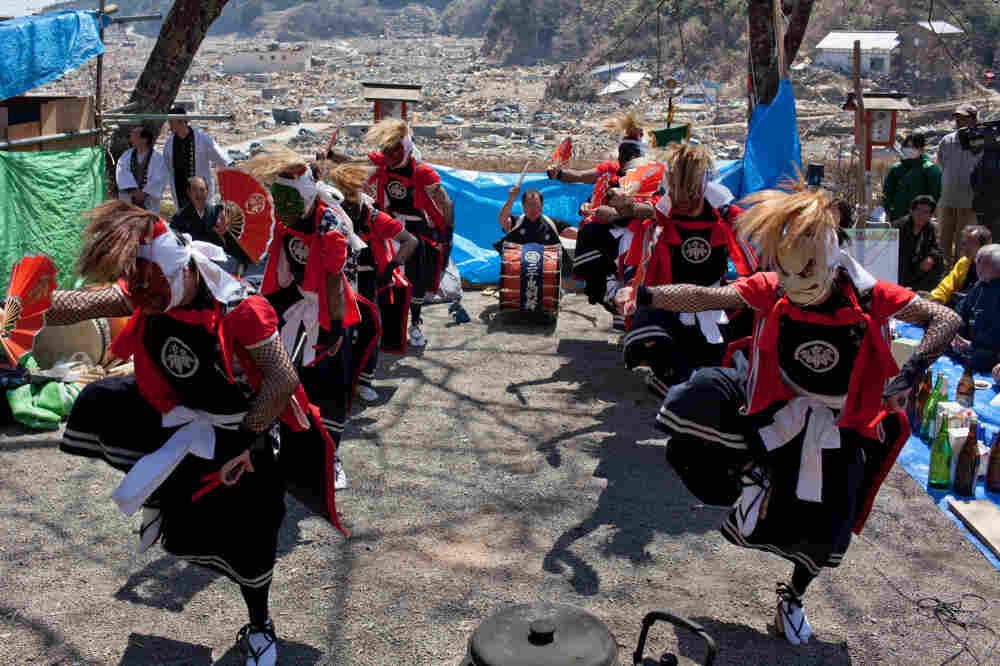 Japanese performers dance at a temple in the tsunami-devastated area of Rikuzentakata, Japan, on April 17. Yasuyoshi Chiba/AFP/Getty Images hide caption

The Japanese seaside town of Rikuzentakata is home to a tiny temple called Kongoji. It's perched on a hillside and is one of the few structures still intact after last month's earthquake and tsunami.

Rikuzentakata was so flattened that it's hard to imagine life continuing here at all. Surveying the whole city, you can see maybe 10 buildings that are still standing. And yet, on a recent day, the sound of drums came from the hillside temple.

Celebrations to honor the dead might be commonplace in the United States, but in Japan they are unusual. Especially now, with the country in self-preservation and conservation mode.

But a recent ceremony in Rikuzentakata featured men dressed in colorful robes re-enacting a dragonlike god blessing local rice cakes and sake. It's a ritual normally reserved for a harvest-time offering to the gods. But organizers say this performance was a requiem: Fifteen people died and eight are still missing from the neighborhood at the foot of this hill.

The offering was followed by a long, silent prayer. Then a troupe of young men wearing wooden masks performed an acrobatic, traditional dance. 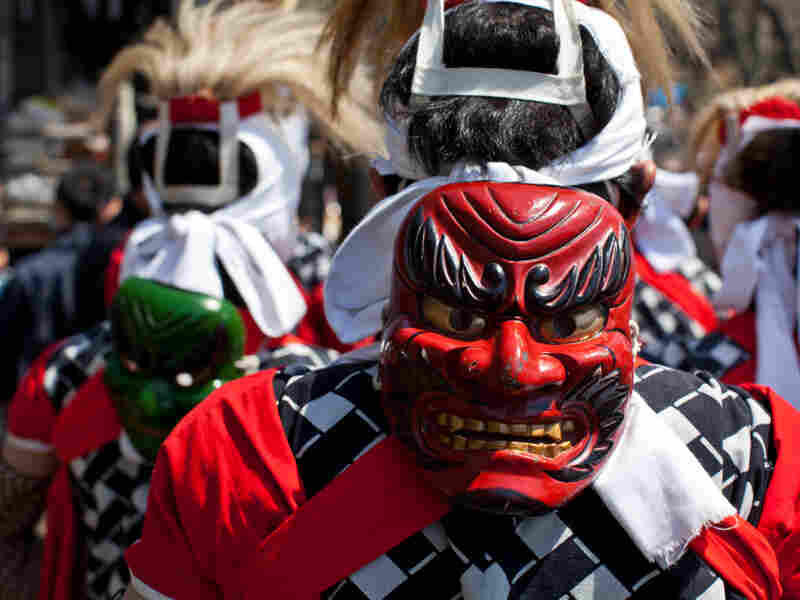 A Japanese performer wears a devil mask during an April 17 ceremony at a temple in Rikuzentakata. Yasuyoshi Chiba/AFP/Getty Images hide caption 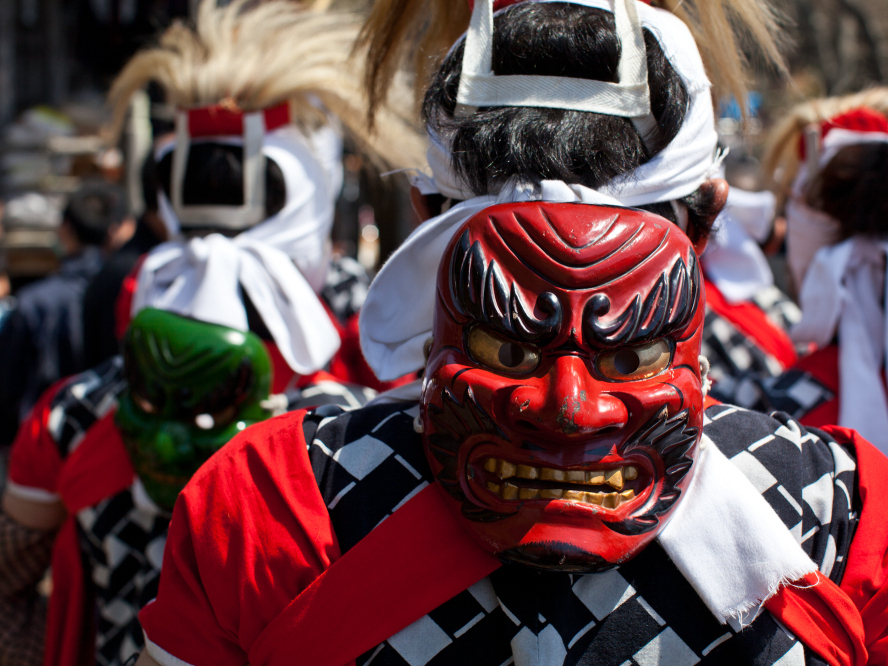 A Japanese performer wears a devil mask during an April 17 ceremony at a temple in Rikuzentakata.

Older residents in the audience wept, moved by the idea that they were not just carrying on — but carrying on age-old traditions.

'I Can't Tell Whether I'm Happy Or Sad'

Volunteers from around the country brought their bounty. Residents feasted on stews, grilled fish and fried noodles. They grew cherry-faced, knocking back plenty of beer and sake from a famous local company that the ocean washed away.

There are those who are critical of anything that looks or smells like a party when the country is still in mourning. Particularly anything reminiscent of a cherry blossom festival, which typically involves drinking to excess. And the novelty of ceremony — juxtaposed with total desolation — drew Japanese television crews and newspaper reporters.

Indeed, survivors like Takeko Kono say they didn't know how to feel.

"I can't tell whether I'm happy or sad to be here," she said. "My house is right there. Right there. I lost my daughter, so I came here looking for photos. But I didn't find anything. I just found these old bills."

Naoshi Sato is the muse behind this event. The 77-year-old Sato lives on the waterlogged second floor of his house. He had mentioned holding an event to honor the dead, and that made its way onto the Internet.

Sato himself looks tired and soiled. But he still likes to crack dry, off-color jokes. He tells those gathered he loves them like his grandchildren ... or wives ... or lovers.

Every day, they have to move ahead, he says. One small step every day, patiently and steadily.

Sato is a logger. The tsunami washed away his chain saw, and the next day he ordered a new one. After all, he says, there are more than 500 houses in his neighborhood that need to be rebuilt.