Accessibility links
Busted: Feds Shut Poker Sites, Leave Players Hanging After federal prosecutors closed the three most popular online poker sites, players throughout the U.S. are wondering if it really is the end of online poker. Poker site operators and bankers who handled transactions were the ones charged, but the players feel out of luck, too.

The people who played online poker — sometimes as full-time jobs — have been left in limbo since the Department of Justice shut down the three largest online poker sites last week. Some players have thousands of dollars on account which they can't access.

Shawn Lindstrom didn't think there was much risk involved with his favorite hobby.

"My self conception was that my online poker playing was legal," he says. 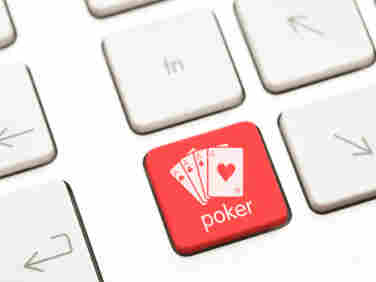 Lindstrom used to play in a home game that moved online when some players in that game moved out of town. That game was kept alive until up to 10 million online poker players found their favorite sites shut down Friday. Federal prosecutors charged three big poker sites and the banks that serviced them with fraud and illegal gambling.

Players who went to FullTiltPoker.com, AbsolutePoker.com or PokerStars.com saw only an FBI seal.

Joseph Kelly, a professor at the State University of New York at Buffalo and the co-editor of Gaming Law Review, says there's a decent case that these players really didn't break the law.

"It's uncertain whether these laws actually prohibit online poker. The Justice Department says it does," Kelly says.

No players themselves were charged, but that still leaves guys like Russell Fox out of luck.

His primary income comes from a fulltime job as a sales rep for a beverage company. The phrase he uses regularly to describe the state of online poker is "a joke." It is a joke, he says, that real-life poker is legal in some states and treated as the devil's downtime in others. It's a joke that websites have to put their headquarters in Costa Rica and the Isle of Man to serve guys from Fresh Meadows, Queens in New York, he says, and it's a joke to think that online players will be denied.

"They went after the big three to make a point, but meanwhile I can name 25 other poker websites that are up and running," Fox says.

Mark Anderson is an online player from Los Angeles.

"If you go to those online forums, they're all talking about moving. And they're serious because they'd much rather try to find a way to move to Canada, where it's perfectly legal," Anderson says.

Another message board run by the Poker Players Alliance, an advocacy group whose chairman is former Republican Sen. Alphonse D'Amato, is full of stories about how the shutdown is affecting players.

One post says, "I recently graduated with two degrees, one in microbiology and one in molecular genetics. Currently looking for a full-time job, I play online poker for 3-4 times more per hour than I do at my part-time job."

There are, of course, no testimonials from players saying online poker was costing them a few hundred dollars a month. But for the moment, at least, there are no online poker winners. Today, millions of players know that the government holds all the cards.