Accessibility links
'Portal 2': A Student Video Game Project, All Grown Up The puzzle game Portal went from humble beginnings as a student project to become a hit beloved by critics and gamers alike. This week, Valve releases the sequel, Portal 2. Fans of the original loved its music, and the enemy's ploy of promising cake.

Listen
'Portal 2': A Student Video Game, All Grown Up 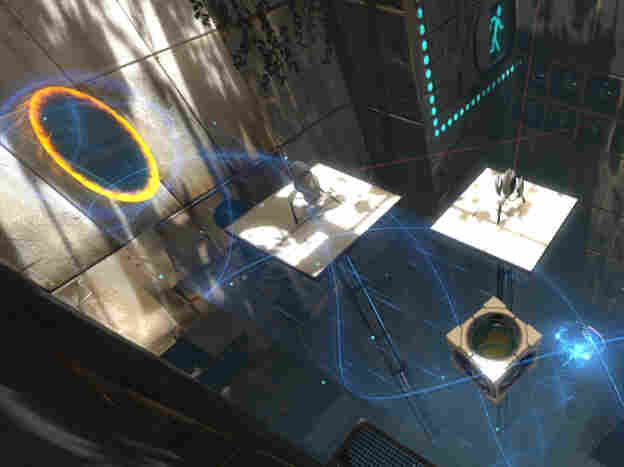 In the video game Portal 2, players use portals to teleport themselves and objects to help solve puzzles. Valve software hide caption 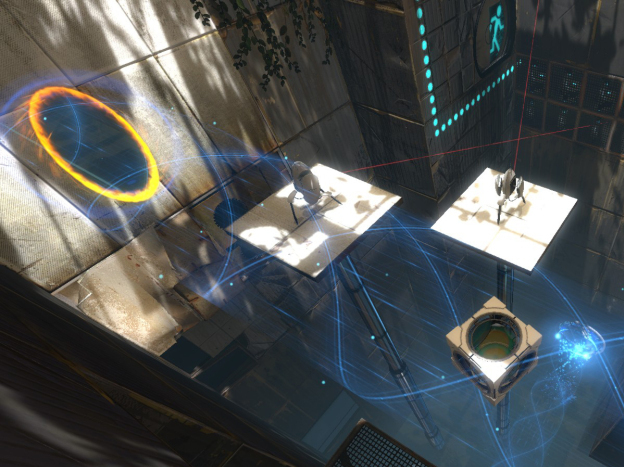 In the video game Portal 2, players use portals to teleport themselves and objects to help solve puzzles.

This week, gamers get a video game sequel they've been waiting for since 2007.

Portal 2 is the follow-up to the original Portal, a small puzzle game with humble origins that became a critical hit and sold almost 4 million copies.

A Puzzle Disguised As A First-Person Shooter

At first glance, Portal looks like a first-person shooter game, from the same family as Halo or Call of Duty.

Play for a few minutes, however, and you realize that no armies of bad guys are coming to attack. In fact, the player is pretty much all alone — trapped in a scientific testing facility with an omniscient computer scrutinizing your every move.

The goal is to find your way out of each room by using a portal gun, a device that allows you to teleport across large distances instantaneously. The meat of the game is solving a series of physics-based puzzles.

But the gameplay was so novel that it hooked critics like Jeff Gerstmann, co-founder of the game review site GiantBomb.com.

"It was almost universally loved," he says — a feat rarely accomplished in the world of video games. "Portal does a great job of making you feel very, very smart."

That's not just one man's opinion. The website Metacritic.com, which aggregates video game reviews, gives Portal a 90 out of 100, a rating it translates as "universal acclaim."

The fact that Portal became a critical darling is all the more impressive given its humble beginnings as a student project at DigiPen Institute in Redmond, Wash. Early versions of the game looked and sounded significantly different from Portal.

Garret Rickey was on the team of seven students who worked on that game, which they called Narbacular Drop.

"We wanted to make up a word that hadn't been used for anything else, so when someone searched for it we'd be the top link," he says.

That strategy had one big problem. When people typed the name into Google, the search engine auto-corrected the made-up word "Narbacular" to one more associated with skin infections: "carbuncular."

Naming issues aside, a representative from the video game developer Valve saw the project at a DigiPen career day and was impressed enough to invite the students to give the company a full demo.

"When we got there and started showing off the game, they kept bringing in more and more people, different people we've never seen before," Rickey says. "And by the end of the day, they didn't just give us advice — they offered us a job."

That visit started the process that would turn Narbacular Drop into Portal.

"We were blown away," Rickey says. "This rock-star company was going to hire us to make our student project a real shipping game."

Portal took only a few hours to play, from start to finish. It was released as part of a compilation with the first-person shooter Half Life 2 and the cartoonishly violent multiplayer online game Team Fortress 2.

But it was Portal that struck the biggest chord with gamers.

"It was so well-written, and the mechanics of it are so tight," Jeff Gerstmann says. "It feels like something more."

Embraced By The Internet

For the original Portal, Erik Wolpaw wrote the dialogue spoken by the omniscient computer, GLaDOS. The computer speaks in a calm feminine voice, akin to public service announcements you might hear in a subway.

One way the computer attempts to get the player to do its bidding is with the tempting offer of cake.

[Spoiler Alert] But that sweet-sounding computer pulls a 2001: A Space Odyssey and turns out not to be so nice.

"And somehow, for whatever reason, 'The cake is a lie' caught on as this thing that was appearing everywhere," Wolpaw says.

The phrase can be found on blogs and message boards across the Internet. Some people even baked Portal-themed wedding cakes.

Gamers also embraced Portal's music — especially the song "Still Alive," which plays during the game's closing credits. Written by Jonathan Coulton, a singer-songwriter known for his quirky lyrics, "Still Alive" is a passive-aggressive song sung by GLaDOS after the player manages to beat the game.

Coulton says fans quickly embraced the song, even uploading their own cover versions to YouTube.

"Immediately there were all of these spinoffs, and people doing covers on the ukulele," he says. "And I think it's an elementary school chorus who [also] sang the song."

Coulton says the song is undoubtedly more famous than he is. And he envisions playing it at concerts for a very long time.

"It certainly has led a lot of people to my music," he says, "and still today, there are people who discovered me through that song."

Compared with the relatively quiet release of the original game, Valve, the company behind Portal, is going all-out for the sequel.

No longer part of a compilation, the game is being released all by itself. It's about four times as long, including a cooperative mode that requires two players to work together to solve puzzles.

The original Portal team consisted of seven core people — for the sequel, the team had 40 members.

Valve has put out a full publicity push, with billboards and advertisements on TV and in movie theaters.

Portal 2 also adds new voice talent, including Stephen Merchant, co-creator of The Office and a co-star of HBO's Extras. Erik Wolpaw says the team was surprised when the actor agreed to participate.

"Just because he was co-creator of The Office, we figured he was filthy, filthy rich. Which he may very well be, I don't know," he says.

So far, history is repeating itself with the sequel. Valve tapped the team behind another DigiPen student project, Tag: The Power of Paint, to incorporate that game's mechanics into Portal 2.

And Jonathan Coulton was tapped to write a new song for the game — to potentially be covered by ukulele players and grade school choirs everywhere.