Accessibility links
Warrior Pose Part Of Rehab For Army Veterans For many soldiers who have been wounded in Iraq and Afghanistan, push-ups, pull-ups and platoon runs have become impossible, so the Army has been developing what it calls "enhanced" physical training. And that includes yoga as well as archery, golf and bowling. 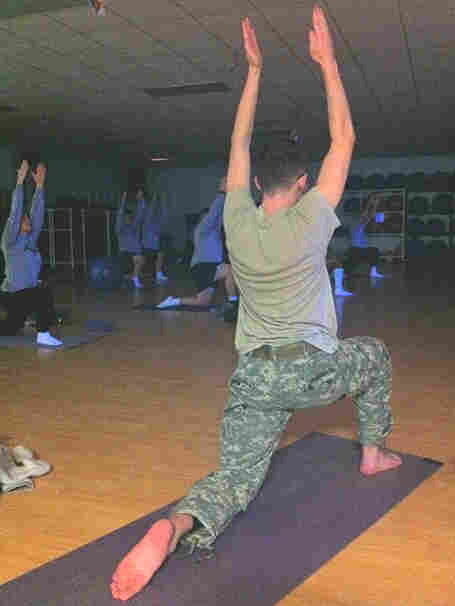 A soldier moves into the crescent pose at a daily yoga class offered at Fort Campbell in Kentucky. Blake Farmer for NPR hide caption 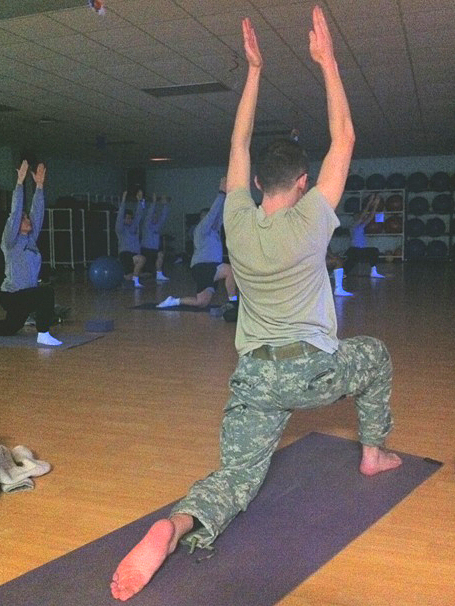 A soldier moves into the crescent pose at a daily yoga class offered at Fort Campbell in Kentucky.

The Army is famous — or perhaps infamous — for its high-octane drill instructors. But for many soldiers who have been wounded in Iraq and Afghanistan, push-ups, pull-ups and platoon runs have become impossible, so the Army has been developing what it calls "enhanced" physical training.

For soldiers taking a yoga class at the Warrior Transition Unit — which serves war-wounded soldiers — at Fort Campbell in Kentucky, the gentle commands of instructor Hylan Hampton have replaced the yelling of Army physical training.

"Remember that there's no judgment, no competition with yourself or with anyone around you," Hampton tells veterans taking the class, leading them through poses — child's, sunflower, cat and cow.

The men and women taking the class have sustained visible as well as invisible injuries.

Spc. Michael Stefan is a combat medic who suffers from post-traumatic stress disorder.

"Seeing soldiers get killed, and working on them and the memories and flashbacks that go along with that, this is the outcome," he says. "But now I'm at my point in life where I'm transitioning out of the Army, and I have a wife and three kids and one on the way, so now I need to better take care of myself."

Taking care of himself is more complicated than it used to be. Because of his medication, Stefan is not supposed to get very sweaty.

But a good sweat is just what Stefan needs, says Lauren Geddis, his occupational therapist. She says yoga combines fitness and stress relief for her PTSD patients.

"They're able to relax in a more appropriate way than the means that they may try at home. That's where we get into drinking. We don't want that," Geddis says.

Across the Army, roughly two-thirds of those who enter Warrior Transition Units end up getting discharged from the service for medical reasons. Those returning to duty maintain a more rigorous regimen. Soldiers getting out try water aerobics, golf and bowling.

It's not as leisurely as it sounds, he says. He admits, however, that some wounded veterans are reluctant to give up on traditional physical training.

But the Pentagon supports these so-called adaptive sports, even for soldiers leaving the Army. It started putting money directly toward these programs last year. Jarvis says the payoff comes later.

"We're really looking at a lifetime of fitness, the emphasis on trying to give them some sort of fitness activity that they could do for the rest of their lives," Jarvis says.

As for making yoga a lifelong pastime, Stefan, who is with the 101st Airborne Division, says maybe.

"At first, I was skeptical because I liked running six or 10 miles a day, just doing it the 101st way. But the positive thing is for me to focus on what I can do to overcome symptoms of PTSD, rather than getting stuck in a rut, the self-centered 'oh me' mentality, which I used to have," he says.

Stefan says he wants to be a "proactive" veteran, and right now that involves starfish hands. In yoga's defense, Stefan points out that there is also a warrior pose.