Accessibility links
In Egypt, Revolution Moves To Factories Under Hosni Mubarak's regime, many of Egypt's industries were privatized. Government-owned factories were often sold for bargain basement prices to government loyalists or foreign buyers with the right connections. Many of them got rich by cutting wages and benefits. With the fall of the old regime, the workers are fighting back.

Listen
In Egypt, Revolution Moves Into The Factories 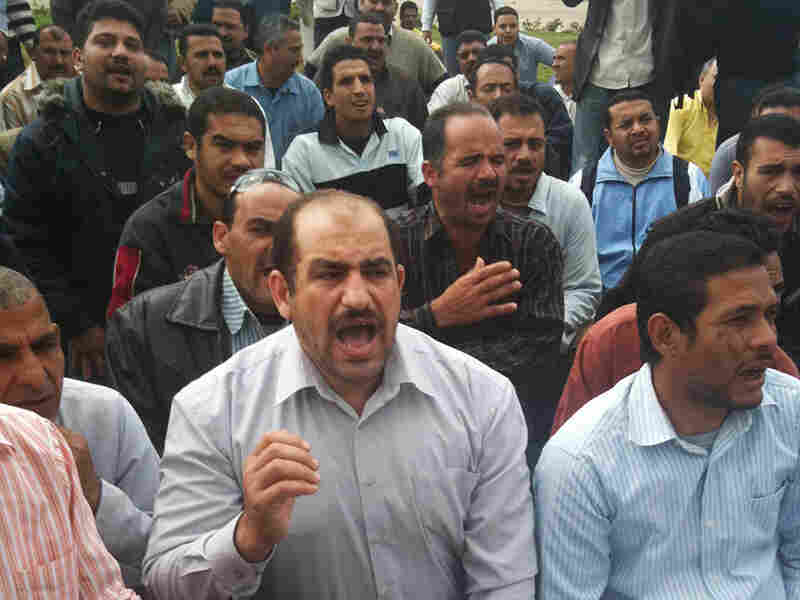 Textile workers at Shebin El-Kom protest on the grounds of the factory in Menoufia, about 90 miles from Cairo in the Nile Delta. Deborah Amos/NPR hide caption

Egypt's popular revolution was launched from a public square. Now there's an uprising on factory floors — with labor strikes across the country.

Under the regime of former President Hosni Mubarak, many industries were privatized as Egypt turned from a state-controlled to a market-driven economy. But government-owned factories were frequently given to loyalists or foreign buyers who had the right connections. Many of them got rich by cutting wages and benefits.

Now, the workers are fighting back.

In Menoufia, about 90 miles from Cairo in the Nile Delta, the main employer is the Shebin spinning and weaving factory. For generations, local men have worked at the sprawling 150-acre plant, spinning Egyptian cotton into products for the world market.

But the factory is closed now. The workers are all on strike.

On all levels there is more organizing than I've seen before. It has been given a boost by the revolution.

They have chanted and marched for more than a month, encouraged by the success of the popular uprising that forced Mubarak to resign, labor activist Hossam Hamalawi says.

"On all levels there is more organizing than I've seen before," he says. "It has been given a boost by the revolution."

Politicians from Cairo see which way the wind is blowing; these days they come to support the striking workers.

The Shebin textile factory was privatized in 2007 — sold to an Indonesian multinational company that served customers including Nike and Adidas. The new owners started to drastically cut costs as soon as they took over, a shock to workers who had job security and benefits when it was a state-owned plant, Hamalawi says. 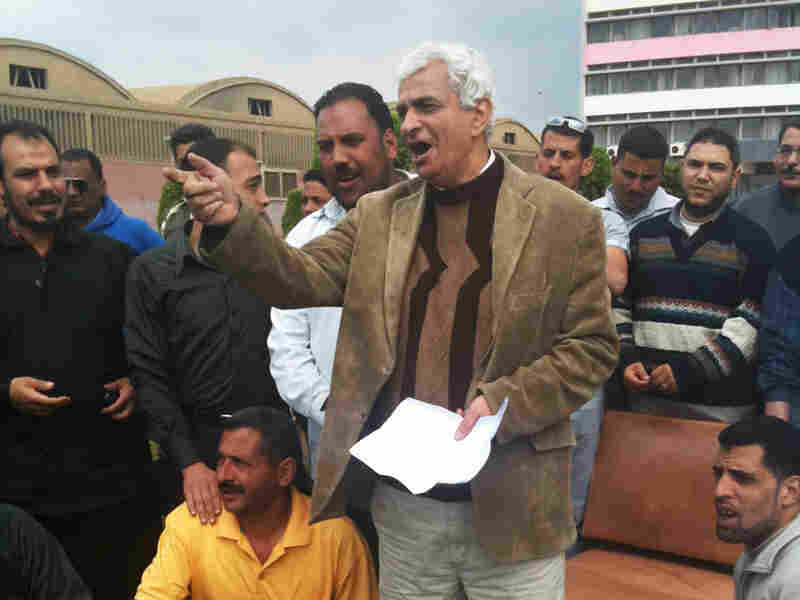 "[At] most of the privatized factories, salaries have been slashed, workers have been laid off, and what we call the bonuses and the allowances, they have also been slashed," he says.

Now, with Mubarak gone and state security dismantled, the workers decided the time was right. When the owners eliminated another 95 jobs in March, the sit-in began.

Ahmed Khalifi joined the strike when he saw his friends forced out.

"They fired them and accused them of taking drugs, and then they just locked it up," he says. "Is this an investment? To fire workers and shut the factory?"

Khalifi has worked at the factory for more than 20 years. He says he earns less than $200 a month.

During a tour of the factory, he points out the conditions in the workers washroom. It's filthy. The doors are open. The walls are grimy. But workers say this is what they have to work with.

Crony capitalism has grown up in Egypt, particularly in the past decade. And liberal economic policy is tarred with that corruption.

Michael Hanna of the Century Foundation

The Indonesian owners have offered a deal: more bonuses, longer contracts and a reinstatement of half of those laid off.

But it's not enough, Hamalawi says. The workers of the Shebin textile factory are going to court to challenge the original sale and force the owners out.

"They are lobbying the government in order to re-nationalize the factory," he says, "and return it to the public sector once again."

Egypt won praise in Europe and the United States for privatizing the economy, but Egyptians were disgusted by the corruption that came with the transformation. Even the military was against "selling Egypt," as a top army official told state television this week.

"Crony capitalism has grown up in Egypt, particularly in the past decade," says Michael Hanna, who is in Cairo for the U.S.-based Century Foundation. "And liberal economic policy is tarred with that corruption."

"And so it's very difficult now to try to push policies that are now, in the minds of regular Egyptians, associated with massive distortions in wealth, inequality and corruption," he says.

There is wide sympathy for the textile workers' strike, and it will be hard to convince Egyptians that private enterprise, so associated with the old regime, is good for Egypt.