Accessibility links
McDonald's Hopes Hiring Drive Redefines 'McJobs' The fast food giant's "national hiring day" aims to fill 50,000 openings — and gives the company a chance to battle the stereotype that it is an employer of last resort. 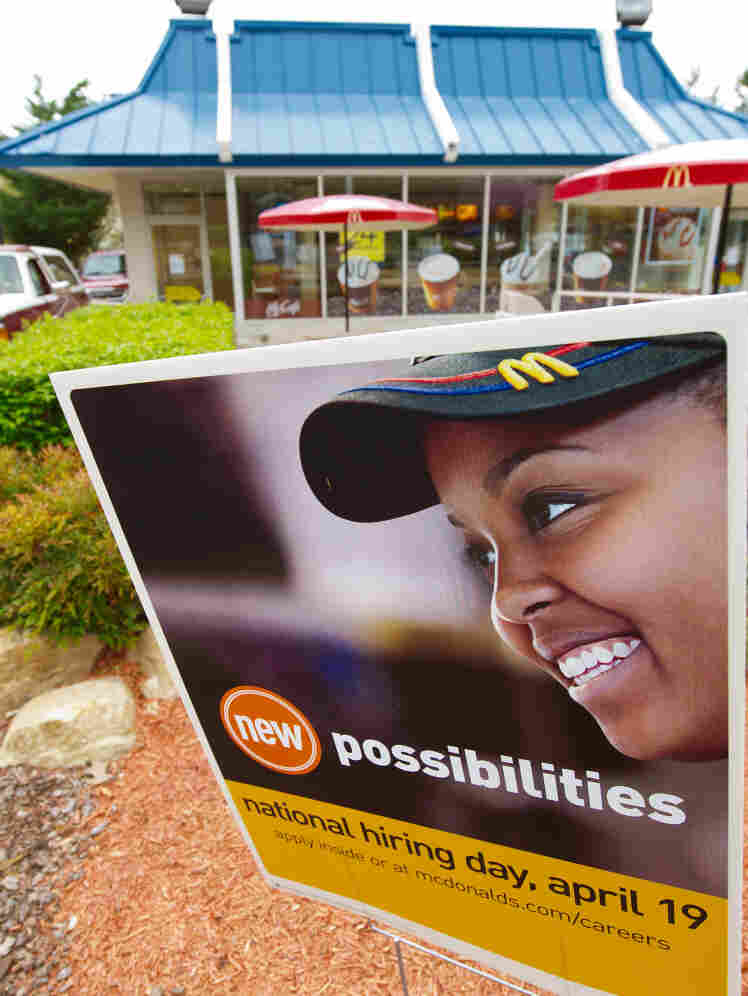 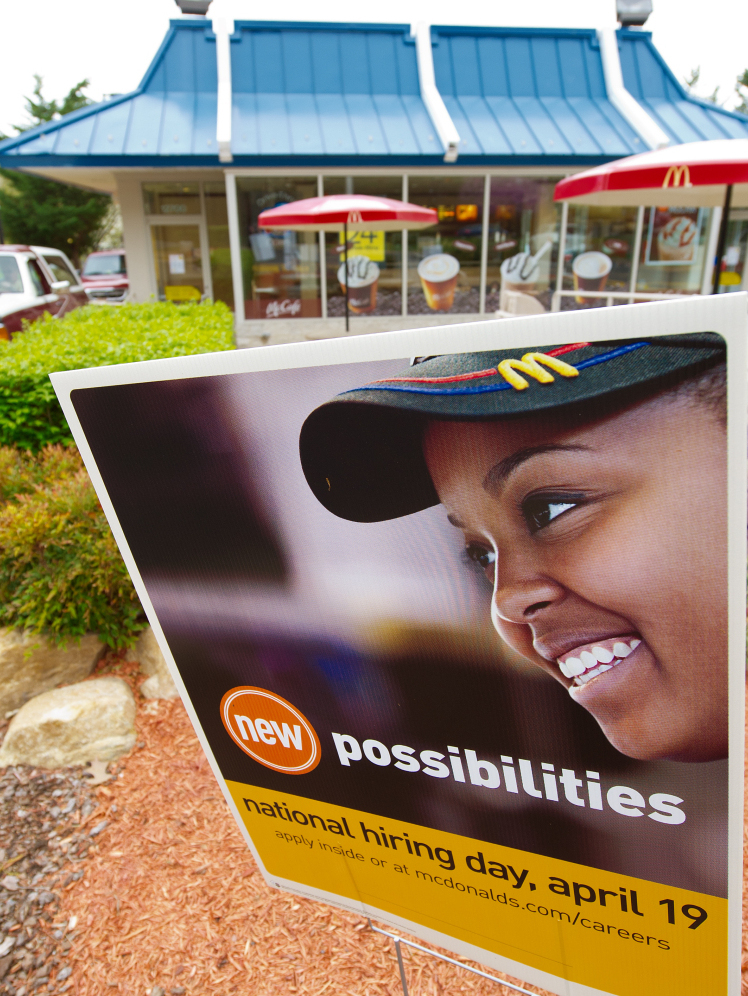 A sign outside a McDonald's restaurant in Fairfax, Va., advertises the company's hiring drive. Company officials say they hope the drive will not only fill openings, but also help change old stereotypes.

McDonald's Corp.'s super-sized effort to hire 50,000 new employees in a one-day blitz Tuesday has two purposes, company officials say — one obvious and one not so obvious.

The first, of course, is to fill open slots. The other is to help the company challenge its stereotyped image as an employer of last resort.

The king of the fast-food industry is eager to change the perception of the "McJob" –- a term the Oxford English Dictionary defines as "an un-stimulating, low-paid job with few prospects." The company has even launched a contest called "I love my McJob," inviting employees to shoot a video testimonial.

But it's not the high school student next door in his or her first job that McDonald's needs to win over. Thanks partly to the recession, the typical McDonald's employee is more often an adult trying to make ends meet, said Heidi Shierholz, a labor economist at the Economic Policy Institute.

"It's actually a myth that minimum-wage jobs are held by middle-class teenagers," Shierholz said. "The majority of people who hold those jobs are adults who contribute a substantial chunk to their family's income."

David Autor, a professor at the Massachusetts Institute of Technology Department of Economics, agrees.

"You see an increasing number of adults competing for what had been teenage jobs – but that was the case even before the recession," he said.

Autor said that in the past few decades, service occupations, such as fast-food jobs, have been expanding rapidly and they didn't show contraction during the recession, as did other sectors.

"Unlike a lot of other jobs, these will continue to grow because they are hard to automate and you can't move them overseas," he said.

And that means McDonald's will need to keep hiring.

"I think there are a lot of people out there who said 'I could get a McDonald's job, but I'd rather ride out my unemployment," Autor said. "Maybe McDonald's wants people to reconsider that point of view."

McDonald's – which is among the country's largest employers, with some 650,000 workers nationwide — stresses flexible work schedules and job skills, while it dangles the prospect of a more lucrative career.

Still, there's no getting around the fact that entry-level jobs in the fast-food industry are not well-remunerated. McDonald's, based in Oak Brook, Ill., said franchisees set wages but that most pay more than the $7.25-an-hour federal minimum.

If the response to Tuesday's event is any indication, plenty of people are interested. Oldani said the stores have been "jam-packed" with applicants.

In Rock Hill, S.C., the office manager for the Man-Dan management company, which operates seven McDonald's in Rock Hill and Tega Cay, said Tuesday that the company had to print additional job applications to accommodate demand.

"The response has been overwhelming," Robert Carter told Herald Online.

To be sure, a company spokesman said McDonald's franchises normally hire about 50,000 workers through April as they ramp up for the summer. But this is the first time the company has made such a public relations splash – hoping to cash in some good will and get some good employees at the same time.

Janice Fine, a professor of labor studies at Rutgers, said there is likely another factor at work. "A lot of people who work there are also their customers," she said.

With Lawsuit Over, Taco Bell's Mystery Meat Is A Mystery No Longer April 19, 2011