Accessibility links
Weekly Standard: Mucky Lessons Of The BP Oil Spill On the one-year anniversary of the Deepwater Horizons oil spill, Andrew B. Wilson of The Weekly Standard takes a look at what the worst oil spill in U.S. history taught us — and what we can expect in it's aftermath. 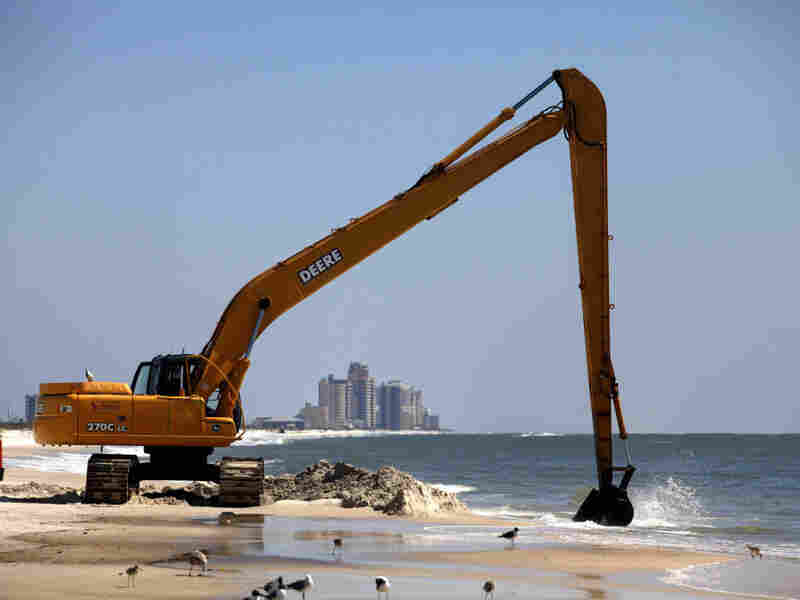 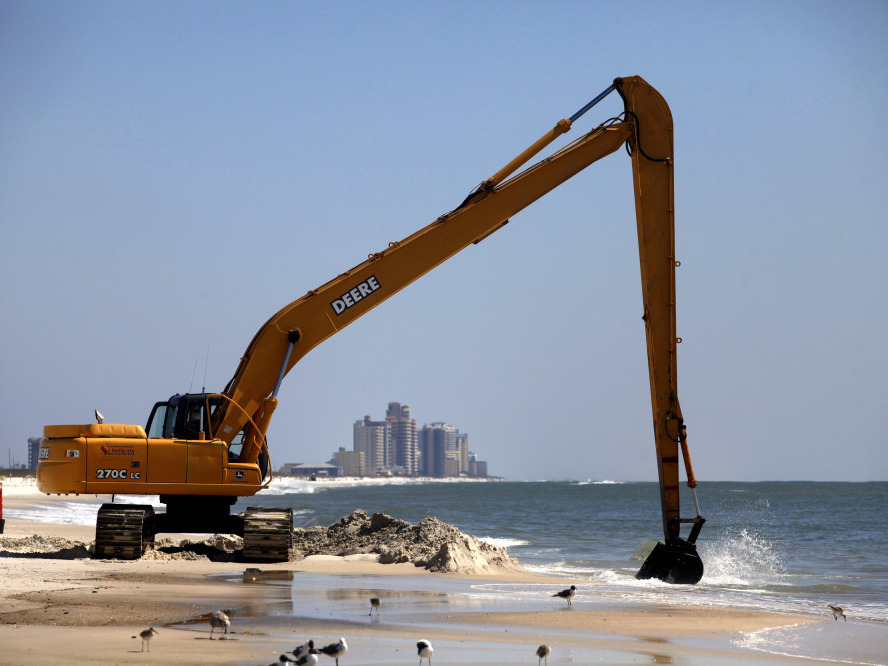 Workers clean oil leftover from the Deepwater Horizon oil spill in the Gulf of Mexico in Pensacola, Florida last month. Wednesday marks the one-year anniversary of the BP oil spill.

Andrew B. Wilson is a writer and fellow at the Show-Me Institute, a free-market think tank.

Just before 10 p.m. on April 20, 2010, disaster struck the giant Deepwater Horizon oil rig. Crew members aboard the rig were in the final hours of attempting to secure a "nightmare well" about a mile deep in the Gulf of Mexico for temporary closure and later production. Undetected, a large quantity of gas and oil entered the well and surged upward through the drilling riser. Upon reaching the surface, the hydrocarbons ignited and engulfed the rig in flames — killing 11 of the 126 people aboard the vessel.

Over the next several months, the Gulf oil spill dominated the news. People were appalled by the sight (captured on camera) of thousands of gallons of oil pouring into the Gulf of Mexico from a gaping hole in the ocean floor. Many called it the worst environmental disaster of all time.

After a series of failed attempts to plug the hole, BP — the well's operator — succeeded in capping the gushing wellhead on July 15, 83 days after the blowout.

Experience is a hard teacher, and catastrophe is an especially demanding one. Over the past year, what has the Gulf oil spill taught us? Here is a list of lessons learned (drawing partly on other recent disasters):

1. Politicians may demand that oil rigs, artificial heart valves, airplanes, and other useful devices be made absolutely safe, but in the real world that engineers deal with, there is no such thing as 100 percent safety. Owing to human error in operating a system, or to some flaw in the original design, accidents are going to happen.

2. Experts agree that the Gulf oil spill was a preventable disaster. It illustrates the first kind of risk — coming from human error and mismanagement. There were several points at which people on the spot ignored danger signals — including evidence of a torn gasket and other problems in the blowout preventer, which is the last line of defense — that should (in one investigator's words) have prompted the reaction: "Stop, think, don't do something stupid."

Beyond that, as I documented last year in these pages ("Beyond Pathetic: BP's Gulf disaster was no surprise to those who understood the corporate culture," June 28, 2010), BP's top management had a history of "green-washing," or playing up to environmental activists, while taking a cavalier attitude toward risk management in the operation of oil rigs, refineries, and other facilities.

3. By contrast, the Fukushima disaster that has been so much in the news recently points more to a basic flaw in the original design of the nuclear complex. Measuring 9.0 on the Richter scale, the earthquake that hit Japan on March 11 was the strongest in the country's history. Even so, the aging nuclear facilities were equal to the task of withstanding the earthquake. Unfortunately, the design of the complex did not anticipate the possibility of a giant tsunami that may have reached 14 meters, much higher than the 5.7 meter wall erected as protection from the sea.

4. Glib, politically correct PR can create a false sense of security. As I found in talking to former executives and others, BP's senior management paid more attention to form than substance. It made a great show of supporting trivial matters relating to safety — such as urging people working in hazardous environments to keep the lids on their coffee cups and to hold onto hand rails — while taking a don't-sweat-the-big-stuff attitude toward much larger safety issues.

5. If there was an unexpected hero to the story, it was Mother Nature. In the first few weeks after the blowout, BP CEO Tony Hayward was excoriated in the news media for stating that the "Gulf of Mexico is a very big ocean" and "the environmental impact of this disaster is likely to be very, very modest." It now appears that he was right. The Gulf oil spill is, indeed, much less of a calamity than most people expected. Said one environmental scientist in late July: "Mother Nature is doing what she is supposed to be doing and we're losing most of [the spilled oil] to microbial degradation in the open ocean." By early August, an oil slick that had been the size of Kansas had all but disappeared, idling hundreds of skimmers.

6. Drilling will continue — the only question is where. The search for oil in deep water is ongoing. Most or all of the drilling rigs that were affected by the moratorium imposed by the Obama administration simply moved to projects in other parts of the world — mostly in Brazil and West Africa. As the price of oil has continued to rise, the pace of global exploration seems likely only to intensify.

7. Even BP will survive. Though BP was browbeaten by the Obama administration into setting up a $20 billion fund to compensate victims of the oil spill, the company no longer appears to be in any danger of bankruptcy. The company's stock lost more than half its value, plunging from $60 just prior to the disaster down to the high $20s in June, but has been trading in the mid-$40s so far this year.

8. Whatever happens — and despite the absence of practical alternatives — leading environmentalists will continue to oppose oil and nuclear as the two great evils of the energy world. In the April 11 issue of Fortune, Michael Brune, the executive director of the Sierra Club, states: "We've had the BP gulf spill, increased concerns about the environmental impact of drilling for natural gas, and now the nuclear crisis in Japan. They're all perfect examples of the costs of our dependence on dirty energy ... What are we waiting for? Why not go all in now and make that transition [to cleaner energy resources, like solar and wind] happen as quickly and smoothly as possible?"

9. Based on the Gulf oil spill, we also learned that the Obama administration is prone to empty gestures and political grandstanding in the midst of what is perceived to be a national emergency.

President Obama made the spurious claim: "Make no mistake: BP is operating at our direction. Every key decision and action they take must be approved by us in advance." Ken Salazar, the secretary of the interior, even threatened to push BP "out of the way" if it didn't move faster. That caused Coast Guard commandant Admiral Thad Allen, overseeing the federal response, to gasp: "Replace them with what?"