Accessibility links
In Cleaning Oiled Marshlands, A Sea Of Unknowns Scientists have begun cleanup efforts in some of the regions that were most affected by oil from the BP spill last April. They're trying to establish which methods — if any — work best.

Listen
In Cleaning Oiled Marshlands, A Sea Of Unknowns 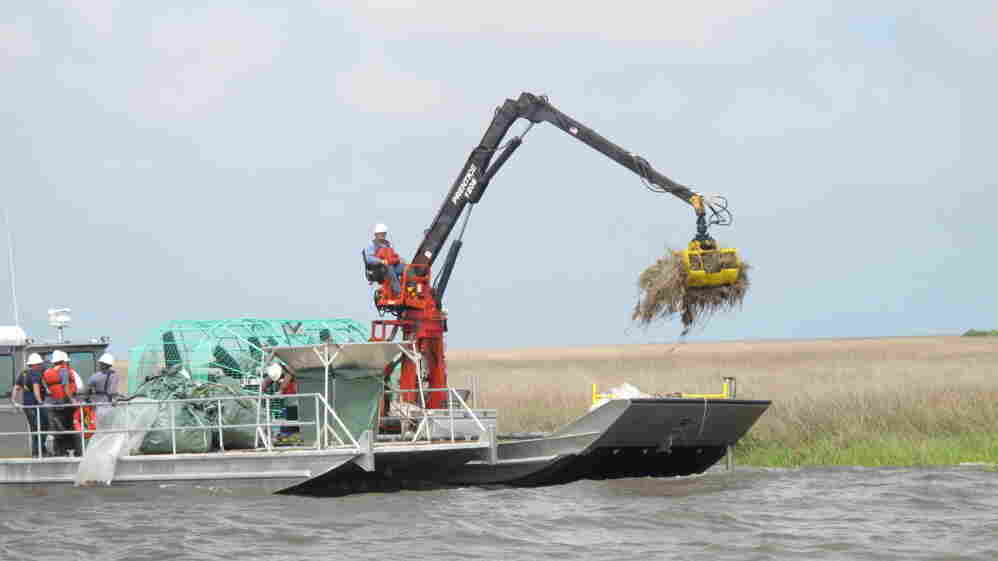 Cleanup crews in the marshlands in Louisiana are using a long-armed machine with a rake on the end to help restore areas that were inundated with oil from the BP spill last April. Elizabeth Shogren/NPR hide caption

On a coastal marsh south of New Orleans, oil still saturates a 30-foot-wide stretch. Where hip-high grass should be, the oil has formed a hard, dark mat. If you dig though that crust, you find a thick, oozy layer of oil.

"It hasn't weathered or degraded much since it came ashore in early June," says scientist Scott Zengel, a contractor for the National Oceanic and Atmospheric Administration, who is overseeing the marsh survey crews.

A year ago, after the Deepwater Horizon exploded, one of the biggest fears was that BP oil would inundate the coastal wetlands that produce so much of the country's seafood. Some oil still can be found on about half of the 1,000 miles of marsh and beach that got hit by BP oil. 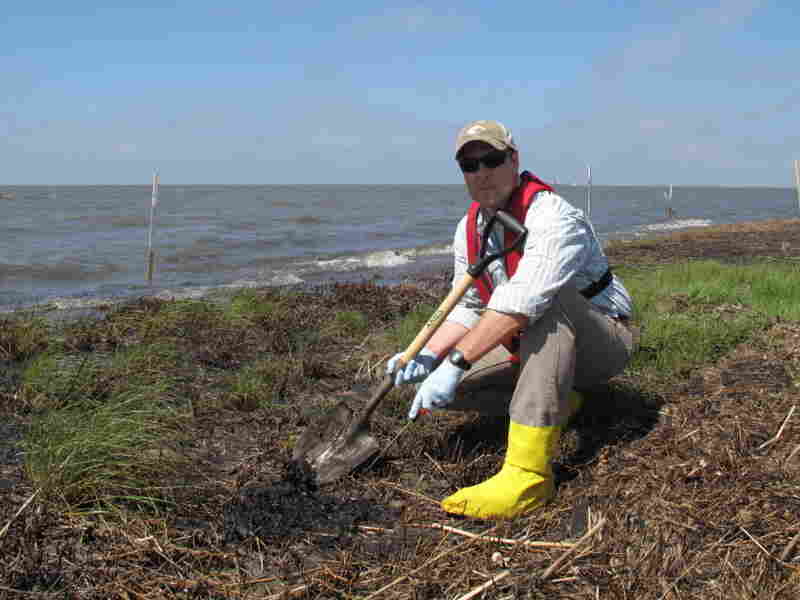 Scientist Scott Zengel, who is overseeing the marsh survey crews on behalf of the National Oceanic and Atmospheric Administration, points to oily "mousse" that lies just a few inches below the surface of the marshland. This subsurface oil isn't being broken down by wind, rain, waves or sun. Elizabeth Shogren/NPR hide caption 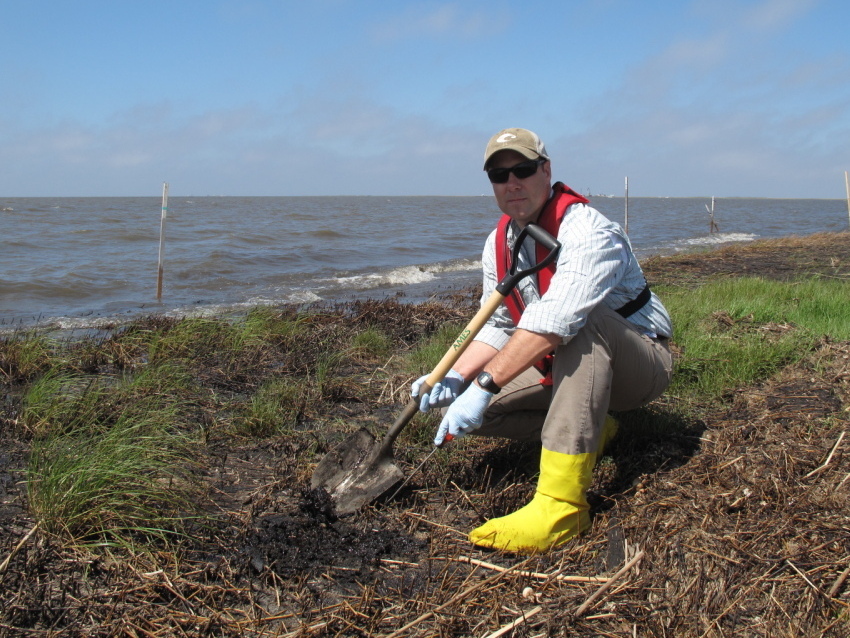 Scientist Scott Zengel, who is overseeing the marsh survey crews on behalf of the National Oceanic and Atmospheric Administration, points to oily "mousse" that lies just a few inches below the surface of the marshland. This subsurface oil isn't being broken down by wind, rain, waves or sun.

Scientists were surprised by how much oil still saturates some stretches of coastal wetlands, such as in the area known as Bay Jimmy.

"It knocked down the vegetation and it formed this tarry coat on top and trapped oil underneath," Zengel says.

Crews documented this oil for weeks, but it was September before one scientist dug into the matted grass.

Zengel digs down about six inches, and his shovel reveals what that scientist also found: a layer of glistening oil, with the consistency of peanut butter. The wind, rain, sun and even waves can't get to it to break it down.

"We just saw how bad it was," he says. "I don't think anyone had quite seen this before" in any previous oil spill.

Zengel has spent so much time here that he barely notices as frequent loud shots ring out. Biologists are so worried about birds getting oiled here, they set up what they call scare cannons to try to keep them away.

Scientists generally agree that after an oil spill, marshes fare best when they're left to recover on their own. Cleaning them usually does more harm than good.

These marshes not only provide a nursery for the Gulf's shrimp, crabs and fish; they also protect New Orleans from storm surges. Even before the oil spill, they were rapidly disappearing.

Zengel decided to use this strip of marsh to test a variety of cleanup methods to see whether some technique could help save this marsh and other heavily oiled areas.

"It's kind of like a mad science experiment," he concedes.

Zengel shows the plots where he had workers try everything from vacuums to power washing to chemicals. Nothing worked. Then he came up with the idea of raking the marsh with pitchforks to get the tarry plants to stand up, and cutting them with a hedge clipper. That uncovers the gooey stuff scientists call mousse. 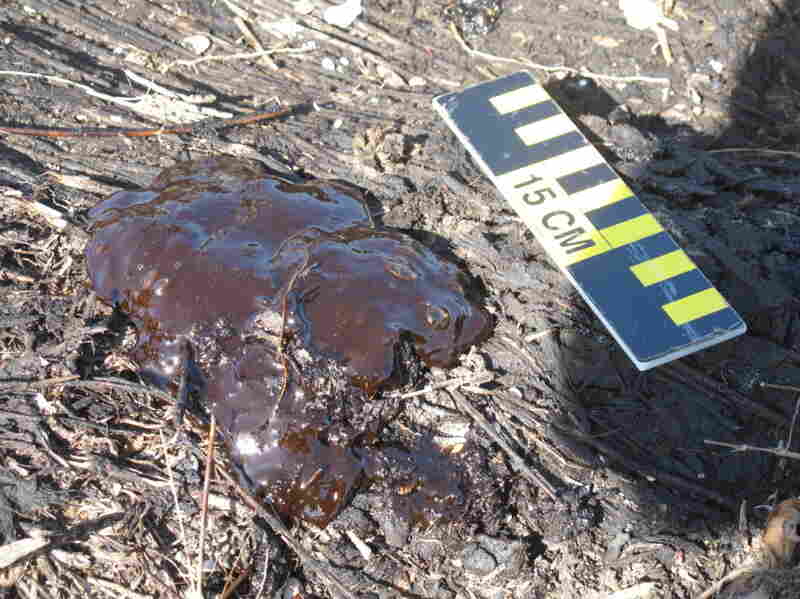 Oil oozes to the surface of marshland near Bay Jimmy, on the Louisiana coast. Elizabeth Shogren/NPR hide caption 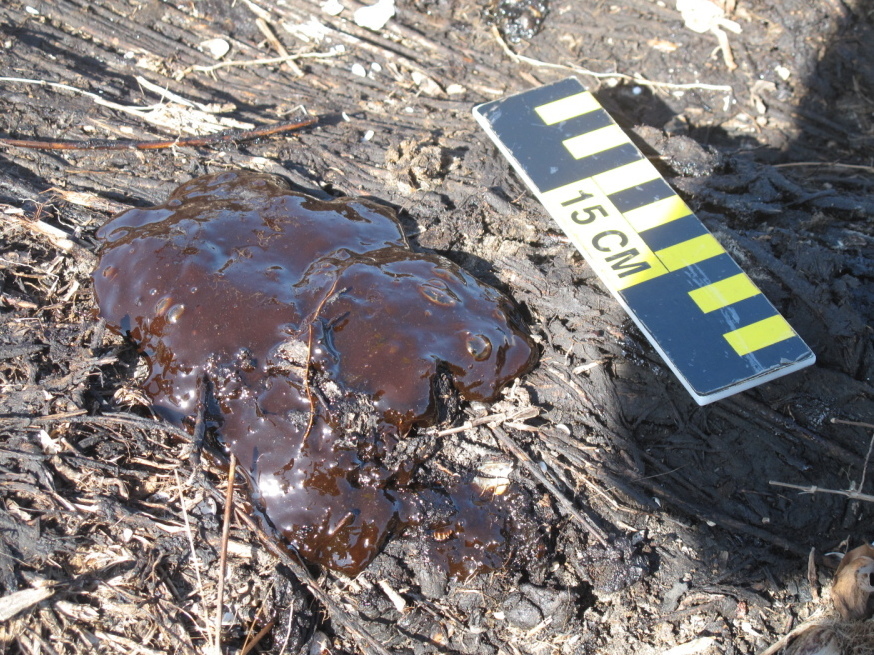 Oil oozes to the surface of marshland near Bay Jimmy, on the Louisiana coast.

"We tried to smear a lot of that mousse up onto the vegetation that we were raking up so that when we cut it, we could remove the material," he says.

The plots where Zengel used this technique do look better than the others. The tarry mat is gone, the surface oil is weathering and when he digs, the oozy layer is barely visible.

"And also compared to where we just were, you see a good bit more vegetation sprouting," he says. Some bright green grasses are starting to emerge in the dark chocolate-colored soil, and a few tiny black mangrove plants have taken root. "Now, is it anywhere close to recovered or looking like the natural marsh behind this area? No."

The Green Light For Cleanup

Some scientists argue that this area should be excavated and replaced with fabricated marsh, and Zengel is the first to admit his work is risky.

BP Oil Spill: One Year Later, A Look Back In Pictures

"Some of these treatments may still end up more damaging in the long run. We just don't know, and we had to make a decision," he says. "Winter and early spring are the time to be in the marsh if you're going to do something."

But early indications were positive, and he got the green light to go ahead. First, manual crews started using the technique. Now heavy machines are mimicking the method — a massive long-arm excavator pulls a makeshift rake across the marsh.

About a third of the 436 miles of Louisiana coastal wetlands hit with BP oil still show some visible signs. But less than 10 miles has enough oil to warrant such an aggressive cleanup, and in many once-oily stretches of marsh, green plants now are sprouting.

Still, scientists say BP oil is in this ecosystem for the long term. Tulane University oceanographer Brad Rosenheim says it's very important to tease out whether BP oil is behind bad things that happen to wildlife and plants in the future.

"For instance, if a section of our wetlands disappears in the next few years, the natural question would be: Was that because of the oil spill or was that because of business as usual on the Louisiana coastline? In order to answer that question, we obviously need a pretty good fingerprint of that oil. We need to monitor it through time," says Rosenheim, who has been regularly sampling oil from the marshes to pinpoint chemical markers that will identify BP oil.

He says one thing already is clear: The oil will be in the beaches and marshes for decades to come.